Amy Cosper: Entrepreneurship is creating something new, innovative or disruptive where nothing was before - Kosovo 2.0
One-on-one | Tech

Amy Cosper: Entrepreneurship is creating something new, innovative or disruptive where nothing was before

What does it mean to be an entrepreneur? According to a simple Google search, it is “a person who organizes and operates a business or businesses, taking on greater than normal financial risks in order to do so.”

But if this definition comes across as dry, there’s always the perspective of Amy Cosper to consider. An entrepreneur for more than a decade, Cosper believes that any entrepreneur should not take no for answer, but rather be driven by the desire to “chase your dreams, change the world and make an impact,” while “creating something new, or innovative or disruptive, where nothing was before.”

Cosper is known as one of the most successful figures in the world of entrepreneurship. She admits that she did not get her “boost” from her degree in Italian and Art History, but by doing what she loved. She started as a reporter in 1995 for the tech world, reporting from Israel, Norway, Luxembourg, Brazil, Paris and London. Afterwards she ran several award-winning financial magazines, before in 2008 becoming vice president and editor-in-chief at Entrepreneur Media Inc., a U.S. based magazine and website that covers news stories about entrepreneurship and small business management. 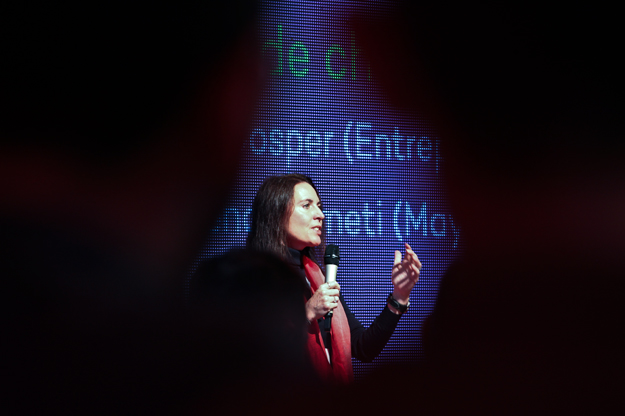 Going through some of her articles, it is easy to see that Cosper is a fighter. She did not despair even when her house burned down in 2010, and her family of four — two teenagers and two adults — lived in a trailer until their house was reconstructed. She wrote that it only made her stronger: “We didn’t crack. We became stronger, better. We proved that we would survive. Yes, rising from the ashes is a cliche, but I happen to know that it’s also literally true. There was life before the fire and life after, and the two couldn’t be more different.”

That’s an experience that could resonate with many people in Kosovo, which she visited last week as a speaker at the fifth edition of KOSICT, the regional conference organized by Kosovo Association of Information and Communication Technology (STIKK), with the aim of bringing global IT trending topics to the Balkans. This year, the conference brought together speakers from a range of leading companies, including Google and LinkedIn.

However, Cosper told the audience that she decided to take a break from the world of media at the end of August, when she left her top role at Entrepreneur magazine. She is now pursuing other life goals, including writing a book, traveling, riding her motorcycle, and making a documentary.

In an interview for K2.0, Cosper said that she was thrilled to meet some of the people of Kosovo, whom she described as very ambitious to make something special and put themselves on the map. As someone who has taken on the mission of spreading the “good word” of entrepreneurship, for Cosper to be successful, one of the core rules is not to fear failure but to look past the fear, because that is the place where “experience, knowledge, empowerment, wisdom and success” await.

K2.0: During your KOSICT talk moderated by Mayor of Prishtina Shpend Ahmeti, you said that you are no longer the editor-in-chief of the magazine “Entrepreneur,” because you needed time and space to focus into another “mission.”

Amy Cosper: Yes, I am writing a book; I’m working on a documentary film about entrepreneurship. So, I took a few weeks off to ride the motorcycle and to get my head straight. So I’m just moving forward as an entrepreneur. I am speaking, consulting, just sort of doing my own thing right now.

"Chasing money is not the reason to be an entrepreneur. Chasing dreams, and changing the world and making an impact by creating opportunities for future generations — that has meaning."

Where do you get the inspiration for everything you do, the energy to recreate yourself?

From people. I get inspired when I’m around people, like people here. People who have a different perspective; people that I know back in the States. It’s fascinating. And it really does restore my faith in mankind. You know, to get to meet cool people from all over the world, chasing their dreams. I mean, it doesn’t get any better than that.

Listening to the different talks at the conference, it sometimes appears that it is easy to become rich by being an entrepreneur and that entrepreneurship revolves around money. Is it a false impression, or is it a fact?

So any time you make money — the primary focus of a business endeavor — you may not fail, but you will not be happy. Chasing money is not the reason to be an entrepreneur. Chasing dreams, and changing the world and making an impact by creating opportunities for future generations — that has meaning. And you know what, if you do what you love and you come from a place of passion, you will succeed and you will make money. It’s a by-product. That is my philosophy.

How do you define entrepreneurship? What is it all about, being an entrepreneur? Opening a business? Making something special?

So, that is a beautiful question and the way to answer that is the way I always defined entrepreneurship — [it] is someone who creates something new, or innovative, or disruptive, where nothing was before. So it is a creation of … it’s like making a sculpture. Something unique and different, and potentially precedent setting. And it’s also somebody who — this is unscientific by the way, but it is just my observation — entrepreneurs who succeed, entrepreneurs like Richard Branson and Jack Dorsey, and these very well known tech-entrepreneurs, they will not take no for an answer. They live and die by this ‘adrenaline’ rush, and the potential to fail. So that kind of personality are the ones that sort of succeed the most and have the most impact in the world of business, or science or research or whatever it is. 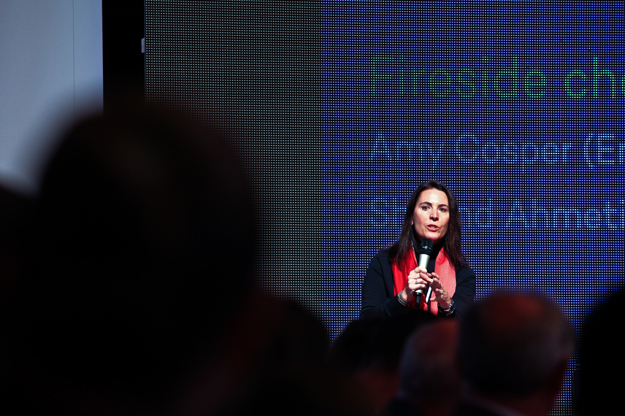 How did you start your career in the world of entrepreneurship? What pushed you in this direction, and at what point in your life did you decide that this is the path you wanted to take?

I was raised by hippies (laughs). My father was an entrepreneur; my mother was an entrepreneur-creative type. So I always had deep appreciation for the process of innovation. And I was always taught to question the process of sameness, to always question repeated behavior and try to find new ways of thinking and new ways of going back and doing things.

So my parents taught me that, and I studied Art History and Italian when I was in college. And you know that is not a terribly useful degree (laughs), so I got into the world of entrepreneurship and I fell in love with it.

You have been in Kosovo for 30 hours, and you mention that you get the “spirit of the place.” What is your impression of Kosovo and the people here?

It is so distinct. First of all, I rode on the plane with some people from Prishtina. And then just meeting people at the hotel and at the conference, and you know at any time, any culture has this level of engagement and this love for really wanting to achieve something special, that’s when you get an entrepreneurial ecosystem. I see it, I see it in the people here. Even the presence of the politicians — they want to start a movement, they want to be on the map for something, for being entrepreneurial, and I mean you can’t go wrong with that.

"Fear is an absolute boundary to success. So get over your fear, don’t focus on it, and don’t let your fear hold you back."

How does one become an entrepreneur? What else, besides having an idea, do they have to do?

I think it’s a bit more than just sitting there and thinking, “I need to come up with an idea.” It’s more like, “I’m so sick and tired of my tire going flat every three weeks so from that problem entrepreneurs will figure out a way to solve it.” So it’s usually that they stumble upon something that causes them pain or a problem or it is a passion; it’s something that it is so in their soul that they cannot stop.

The government of Kosovo promised to help and support all young people who want to become entrepreneurs. During your talk, you criticized the role of governments. What do you think their role should be?

I think it is different wherever you go, but my philosophy is — and this is from years of watching it — the government needs to get out of the way. And the best way the government can support entrepreneurs and communities of small businesses is to get out of the way and to give support, and with what we were just talking about, by education to the young people. Those are the three tenets that really help to move things along.

Coming in and creating policy and bureaucracy, it does not help. In fact, it smashes it down. So it’s my belief that government needs to get out of the way, and make a creative environment and then beautiful things will happen. But if they come in and start saying this is a rule, this is a rule, that is not what entrepreneurship is.

What would be your advice and message to those interested in entrepreneurship?

My advice for all, because I was raised by hippies, is to chase your dreams. Don’t take no for an answer, but do not ever fear failure. Failure is just a part of the ordeal, and if you can imagine… I don’t know if this is going to translate well, but it is a philosophy that I hold dear and that is: On the other side of your fear, if you can get past that fear, is your success. Fear is an absolute boundary to success. So get over your fear, don’t focus on it, and don’t let your fear hold you back, because you will never start and you will never be creative.K