Haradinaj one of 20 appeals submitted to Interpol in December 2016.

Former Kosovo Liberation Army (KLA) members, whose names are on International Criminal Police Organisation (Interpol) arrest warrants issued by Serbia for alleged crimes including war crimes and terrorism, may find the answers to their dilemma within Kosovo’s institutions.

The latter have filed an appeal on behalf of some of those listed with the Interpol Liaison Office of the United Nations Mission in Kosovo (UNMIK). By filing this appeal on November 14, 2016, Kosovo Police requested the repeal of warrants for 20 former Kosovo Liberation Army (KLA) members, including Ramush Haradinaj, the former commander of the Dukagjini Operational Zone who was arrested in France last month.

The leader of the Alliance for the Future of Kosovo (AAK), who was detained at Basel-Mulhouse Freiburg airport based on a 2004 Interpol warrant issued by Belgrade, is currently on police bail, awaiting a court decision on whether he will be extradited to Serbia. A second hearing will take place today, after an initial hearing delayed the decision while it reviewed all of the evidence.

Since Kosovo is not a member of Interpol, its institutions cannot communicate directly with this organization. Communication must instead be made through UNMIK, which according to U.N. Security Council Resolution 1244, has the mandate to facilitate and mediate in this communication and in other communication with international organizations that do not recognize Kosovo’s statehood.

"In December 2016 UNMIK facilitated a submission by the Kosovo authorities to INTERPOL, raising legal issues on a number of cases including Mr. Haradinaj.”

When it comes to international arrest warrants, there is a possibility of their deletion in cases of a lack of evidence or legal basis. A Commission within Interpol reviews appeals that are submitted to it based on the organization’s Rules on the Processing of Data, and can rule to remove certain warrants.

Such an appeals process is currently underway for Haradinaj and another 19 individuals — including ruling Democratic Party of Kosovo (PDK) deputies as well as others outside of politics — who were included on a list submitted by Kosovo Police through UNMIK in November. The appeal was forwarded to Interpol’s General Secretariat in Lyon on December 14, precisely one month after it was submitted to UNMIK.

“In accordance with UNMIK’s role under Security Council Resolution 1244, in December 2016 UNMIK facilitated a submission by the Kosovo authorities to INTERPOL, raising legal issues on a number of cases including Mr. Haradinaj,” Sanam Dolatshahi from UNMIK’s Press Office confirmed for K2.0.

Authorities in Kosovo are still waiting for a reply.

This is, nonetheless, not the first appeal that Kosovo’s institutions have addressed to Interpol, through UNMIK. In 2015, Kosovo Police also drafted a list of dozens of former KLA members with Belgrade-issued Interpol arrest warrants against them, which was sent to the Ministry of Justice as per the internal process in place at that time.

Democratic League of Kosovo (LDK) Assembly deputy, Nuredin Ibishi, is one of those warranted by Serbia through Interpol, having been accused of ethnic cleansing and drug trafficking when he was a KLA officer known as “Commander Leka” in 1999. Now a member of Kosovo’s Parliamentary Commission for Overview of Internal Affairs and Security, he suggests that despite the issue having been discussed on a number of occasions, much more should have been done to appeal the Interpol warrants against former KLA members, and that Kosovo is always a step behind Belgrade when it comes to this issue.

In an interview for Voice of America on January 27, Thaci said that all former KLA commanders have Interpol arrest warrants for them but that all individuals in positions of power have immunity.

Ibishi says that he has encountered several problems when traveling abroad, and questioned why prominent Democratic League Of Kosovo (PDK) members who have had Interpol warrants issued for them in the past don’t have the same problems.

“It seems [they are] politically motivated [appeals to Interpol], since we are talking about people that are part of PDK and have never been arrested,” he said, referring to cases such as the current head of PDK, Kadri Veseli, and his predecessor Hashim Thaci; neither has been arrested on a Belgrade-issued Interpol warrant, despite both regularly traveling abroad.

In an interview for Voice of America on January 27, Thaci said that all former KLA commanders have Interpol arrest warrants for them but that all individuals in positions of power have immunity. However it is unclear what Thaci is basing this assertion on. While Article 3 of Interpol’s Constitution says that “It is strictly forbidden for the Organization to undertake any intervention or activities of a political, military, religious or racial character,” it does not necessarily mean that political figures cannot be arrested if they are alleged to have committed crimes. Equally, while Article 89 of Kosovo’s Constitution on “Immunity” says that “The President of the Republic of Kosovo shall be immune from prosecution, civil lawsuit and dismissal for actions or decisions that are within the scope of responsibilities of the President of the Republic of Kosovo,” it does not protect them from alleged crimes committed before taking office.

Since Kosovo is not a member of Interpol, Serbia has been able to easily issue arrest warrants — which are not always made public — without the knowledge of Kosovar authorities. The Serbian government regularly updates the list of former KLA members on the Interpol “red notice” list, which contains details of people accused of the most serious crimes — including Haradinaj.

The names included by Belgrade often come from an internal list known as the “White Book” by Serbian authorities, which lists 157 individuals who may be arrested if they enter Serbia. The “White Book” includes the names of current Kosovo politicians such as President Hashim Thaci; President of the Assembly Kadri Veseli; deputies such as Fatmir Limaj, Nuredin Ibishi, Anton Quni, Agim Ceku and Azem Syla; municipal majors such as Sami Lushtaku and Xhabir Zharku; and even current military officials in the Kosovo Security Force, such as former commander, Kadri Kastrati, and current general, Rrahman Rama. 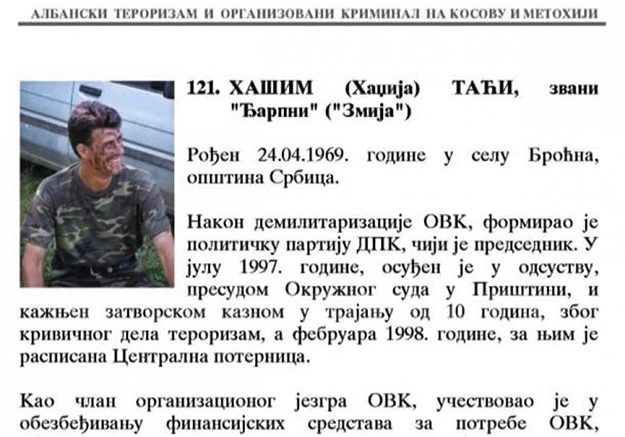 Kosovo’s president, Hashim Thaci, is one of 157 former KLA members included in Belgrade’s “White Book” who may be arrested if they enter Serbia.

Haradinaj’s recent arrest in France is not the first time that Kosovars travelling abroad have been arrested on Belgrade-issued Interpol warrants for alleged crimes committed during the war. He was himself arrested previously, in 2015 in Slovenia, but on that occasion he was released four days later due to a lack of legal basis to extradite him to Serbia.

Former Prime Minister Agim Ceku was arrested in Bulgaria in 2009, but was released two days later.

In 2004, former KLA soldier, Anton Lekaj, was arrested in Podgorica, Montenegro. On that occasion, the then 24-year-old from Gjakova was extradited to Serbia, and was tried for war crimes against the civilian population by Belgrade’s Special War Crimes Chamber. In 2006, he was found guilty of rape, torture and inhumane and degrading treatment, and of the murder of another person. Due to a lack of evidence, the Court found him not guilty on three counts of murder, and another of torture. He is due to be released later this year, having served a 13 year custodial sentence.

Sinan Morina, another KLA soldier, has been arrested while traveling abroad on four occasions. In 2007 he was arrested in Montenegro and extradited to Serbia, where he stood trial for war crimes. He was acquitted in 2008, although that decision was later annulled by the Serbian Supreme Court, after he had left Serbia. He was later arrested in Slovenia, Croatia and Austria.

More recently, former KLA member and the current director of police in the Mitrovica region, Nehat Thaci, was arrested last year in Koncul, Serbia. He was kept in detention for just over two months before being released following a diplomatic intervention, mediated by UNMIK.

While authorities in Kosovo claim that all of the warrants against former KLA members are politically motivated from Serbia, the innocence of many of those who are accused of war crimes is expected to be tried by new specialist chambers, based in the Hague. The chambers, which will issue its first indictments this year, will function under Kosovar law but with international judges and prosecutors.K