In the aftermath of Berlin, what now for the dialogue?

In his book, “The Morning in Rostand Coffee,” the well-known writer Ismail Kadare says Balkan peoples have always had an epicenter to which they pray and which solves their problems and animosities they have amongst themselves.

In primordial times, he says, the ancient Mount Olympus was the place where they went for this purpose. Today, Kadare continues, they have Brussels.

As once they went to Olympus, today, “the problematic guys” of the Balkans — to misquote an expression used last year by Kosovo’s president — go to Brussels to resolve their disagreements, which are simultaneously both old and new.

After Kosovo declared independence in 2008, many — especially many Kosovars — thought that this story may finally be over. But this was not the end of history.

In 2011, the negotiations facilitated by the European Union began. From Brussels. Once again, Olympus had to intervene as an “impartial judge” in the Balkans’ disarray.

But eight years have already passed and there is little progress toward normalizing relations between Kosovo and Serbia. In fact, the past year has given the impression of regression; it seems as though the little progress made has been torn down as quick as lightning, just like in the famous Balkan ballad where the wall of the fortress built during the day collapsed each time the night arrived.

Olympus had failed. It had to be replaced again, as it had many times in the history of the Balkans.

In the summer of 2018, the possibility of the two countries exchanging territories as the key to solving the problem began to be mentioned; some supported it, but more opposed this idea. But what few denied was the failure of the long-standing negotiating process mediated by Brussels.

Olympus had failed. It had to be replaced again, as it had many times in the history of the Balkans.

Relations would become even more complex in the coming season — autumn, 2018. Serbia had been undertaking its own form of diplomacy, attempting to persuade some countries that had previously recognized Kosovo to withdraw their recognitions. But the peak was reached in November, when Serbia lobbied strongly — and successfully — for Kosovo not to be admitted into Interpol.

Instantly, in response, the Government of Kosovo imposed a 10% tax on products of Serbian origin, then quickly increased it to 100% a little later. Kosovar politicians initially argued over who should receive the “patriotic” plaudits for taking such a decision, but with increasing international pressure against the tax, Prime Minister Ramush Haradinaj quickly remained alone as President Thaçi and President of the Assembly Kadri Veseli — leader of PDK, the largest party in the governing coalition — distanced themselves from the tax.

For its part, Serbia stated that it would not continue to negotiate without the tax on its products being revoked. Although Serbian exports to Kosovo represent only 3% of total Serbian exports, President Aleksandar Vučić lamented another injustice to Serbia.

These two Balkan peoples had again become deadlocked. Again, an Olympus was needed.

As Brussels’ shine was fading, another replacement was once again required. Fearing that Washington and Moscow would be the new “twin Olympus” of the Balkans, European leaders were keen to find a solution.

The two “deities” of Brussels, German Chancellor Angela Merkel and French President Emmanuel Macron, called a summit; they agreed to replace Olympus, but not to found it outside the old continent. Berlin, the German capital, was selected to be the new Olympus.

The date was scheduled for April 29, 2019. The Berlin Summit would again gather Balkan leaders, “the problematic guys,” to resolve their long standing quarrels. But the focus was on the leaders of two states, Kosovo and Serbia — the presidents Hashim Thaçi and Vučić, and the prime ministers Haradinaj and Ana Brnabić.

“This is more a confirmation of taking responsibility by Germany and France — the two most important states of the EU,” says political analyst Imer Mushkolaj. “This is an attempt to reconfirm the will to continue the dialogue.” 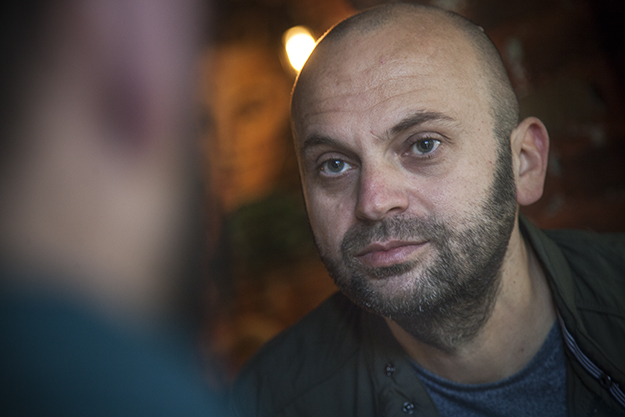 According to Mushkolaj, it’s not only the size and relative political weight carried by Paris and Berlin that is significant in Macron and Merkel fronting the latest efforts to forge an agreement between Belgrade and Prishtina.

“If we consider Merkel’s influence on Vučić and France’s historical proximity with Serbia, we realize it’s not by chance that these [two states] have assumed the responsibility of this summit,” he says. “Likewise, Kosovars are very confident in the Germans.”

Violeta Haxholli, a researcher at the Kosovo Democratic Institute (KDI), says that now North Macedonia seems to have resolved the name issue with Greece, the Kosovo-Serbia dispute is seen by the two most powerful EU states as the last unresolved issue in the Balkans, albeit one that the rest of the Union has not shown the required seriousness to address.

“When the EU started the dialogue in 2011, it was facilitating this process; but it has not been able to finalize the normalization of relations even six years after the Agreement of Principles,” she says, referring to the 15-point agreement signed by the two parties in April 2013. “Furthermore, the parties are even further than before from normalization. I think that in this respect the EU has failed.”

Haxholli doesn’t necessarily put this failure down to the much-maligned EU High Representative for Foreign Affairs and Security Policy Federica Mogherini or her predecessor Baroness Catherine Ashton, but more due to the EU not speaking with a single voice when it comes to the issue of Kosovo. “It’s well known that five EU states do not recognize Kosovo,” she says. 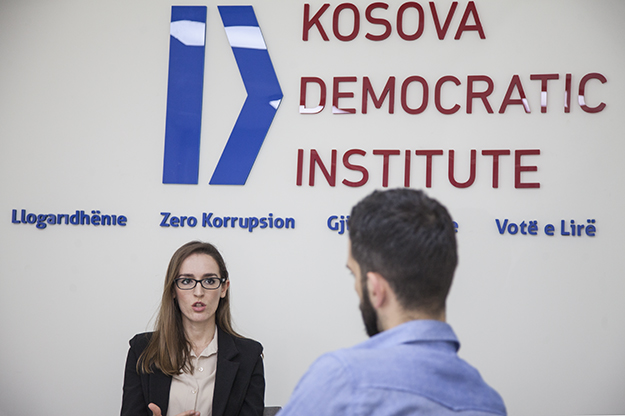 Kosovo Democratic Institute researcher Violeta Haxholli believes that the EU has failed in its role in the dialogue to date. Photo: Majlinda Hoxha / K2.0.

At the same time, Haxholli assesses that the EU has tried to take on more the role of a facilitator, without getting involved in any deal itself and with no guarantees for the implementation of the agreements made to date.

“Of the 33 agreements, most of them have not been implemented at all,” she says. “The EU has failed to force the parties to implement them. Therefore, the bigger role for Germany and France emerges.”

Mushkolaj is also critical of the EU’s role in the ongoing negotiating process, saying that its whole approach to the Kosovo-Serbia dialogue has been “drag but don’t drop.” “It was important for the EU to continue the dialogue, even though the results have been minimal,” he says.

“If we [talk about] the implementation of the agreements and problem solving, no success has been achieved. So I believe that Brussels’s approach has failed. We are now eight years on, and there is no visible improvement on the ground — either for the agreements reached or for smoothing the relations between the two countries.”

In the days leading up to the Berlin summit, the Kosovo media swirled with unconfirmed rumor — with little detail or substantiation — about a new German-backed plan that would see more autonomy provided for Serbs, dual sovereignty of Kosovo and Serbia over Serbian Orthodox churches and a special status for the northern part of Kosovo with the possibility of secession after a 15- or 20-year period.

“Is it worth normalizing relations with Serbia if Kosovo were to become internally abnormal?”

Haxholli points out that the border correction idea has always been opposed by Germany, which sees it as a destabilizing force in the region and that therefore Germany was always likely to try to push the negotiations in another direction.

“Even in the past — in the negotiations in Rambouillet [in 1999] or Vienna [on the final status of Kosovo in 2006-07] — the agreements were accepted by Kosovo, but not by Serbia,” she says. “And, Germany has thought [up this plan] as an agreement that would be legally acceptable to Serbia. Moreover, Serbia would not be obliged to recognize Kosovo and to accept de jure its independence, but it would recognize the political reality and it would not block Kosovo’s European path.”

She notes that KDI believes that anything beyond establishing the Association of Serb Majority Municipalities — a core component of the 2013 Agreement of Principles — would threaten the functionality of Kosovo and its unitary nature and says that the rumored plan that is circulating would create numerous problems. “Is it worth normalizing relations with Serbia if Kosovo were to become [internally] abnormal?” she says.

Haxholli hopes that Kosovo will not be in the position of choosing between what she sees as two potentially harmful options for the state. “Kosovo is not obliged to accept any harmful agreements and should not be rushed, but [in the meantime] it should deal with other issues that do not depend on this agreement,” she says, adding that even if an agreement were to be reached, Kosovo would still have little realistic prospect of European integration in the medium term and that UN membership would not be guaranteed.

As the summit dinner ended, President Thaçi said the parties had not reached any agreement and, adding that they had “agreed to disagree,” hinted at the failure of this process mediated by the Europeans. Thaçi was looking for a new Olympus — the United States.

In fact, the possibility of the U.S. taking a more proactive or perhaps leading role in this process had already come up, notably in December 2018, when President Donald Trump sent a letter to presidents Thaçi and Vučić in which he invited them to celebrate their peace in Washington.

Haradinaj said after the summit that he was pleased with the developments and the European mediation but that he was angry with both Kosovo’s president and Albania’s prime minister, Edi Rama, who he says had applied more pressure to remove the tax on products of Serbian origin than European leaders. Rama denied the accusations.

Meanwhile, Vučić gave a positive assessment of the summit and, in particular, the role of Merkel and Macron in alleviating Kosovo-Serbia tensions. But his foreign minister, Ivica Dačić, stated that during the summit there had been much pressure on President Vučić to have a more constructive approach in relation to Kosovo and to renounce the idea of territorial exchange.

Despite the anticipated lack of concrete progress, both Haxholli and Mushkollaj believe that the dialogue should continue.

Mushkolaj says he often hears interpretations that the agreement with Serbia is not important and that Kosovo could work without it. “Yes, we can,” he says, “but there would be many problems and hindrances.”

He believes that the main problem is not whether or not Serbia recognizes Kosovo, but what happens more broadly to Kosovo as a state.

“Will we continue for 10 more years to stand in the same positions? Not to be affiliated with international organizations and not to exert ourselves as an international subject?” he asks. “Or will we take steps to change this situation?”

Ultimately, the analyst suggests that there is no ideal solution, but hopes that the solutions offered by Kosovar politicians will at least be the least harmful ones for Kosovo that do not violate the core of the state and do not make it dysfunctional.

“If the [Kosovar] state leaders tell us that there will be no change in how the state of Kosovo functions, then they are simply lying to us because it is impossible,” he says. “We know the dialogue is a compromise and the agreement will be a compromise.”

That said, he is optimistic about the future.

“I also see Germany’s involvement with the goal that after the elections in the European Parliament one of the main positions will be taken by the Germans,” he says. “And then it will really be a different approach.”K