Protest held against president and notion of exchanging territories with Serbia.

Today (Sep. 29th), saw thousands of citizens congregate in central Prishtina to join a protest opposing President Hashim Thaçi’s role in Kosovo’s ongoing dialogue with Serbia, and the notion that a final agreement between the two states may involve an exchange of territories. The protest came the day after the release of the results of a poll conducted by the Kosovo Democratic Institute, which showed that over 75 percent of respondents had indicated that they oppose the idea of exchange of territory.

President Thaçi meanwhile took the opportunity to make a rare visit to northern Kosovo, an area many have speculated would be part of any exchange of land. At Lake Gazivoda, a site his Serbian counterpart, Aleksandar Vučić, visited earlier this month, Thaçi gave a brief press conference, speaking of his love of sailing on the lake, and thanking local Serbs for serving him coffee. His visit saw special forces units deployed to ensure the president’s safety, an action that caused consternation in Belgrade, with Vučić sending a protest note to NATO chief Jens Stoltenberg according to Serbian media.

At the protest in Prishtina, K2.0 fought through the crowds to understand why citizens had joined the demonstration, called by opposition party Vetëvendosje. 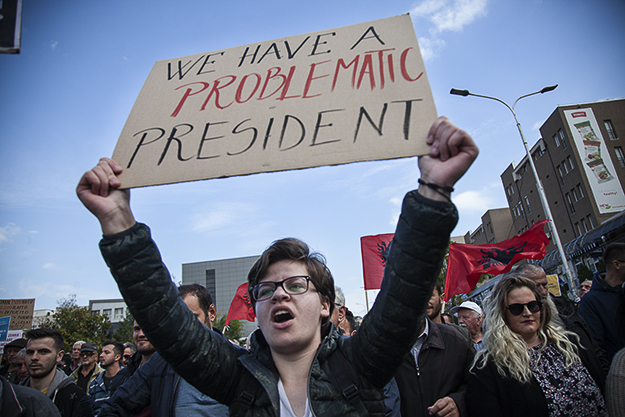 A lot of vitriol seemed to be directed straight at the president. Ali Berisha, a former political prisoner from the village of Kçiç near Mitrovica, described Thaçi as “irresponsible” and “a traitor.” “The reason I went out to protest is that the whole government should resign, but especially the so-called President of Kosovo, Hashim Thaçi,” Berisha told K2.0. “He wants to sell Kosovo,”

Agon, a 23-year old from Ferizaj also spoke out specifically against the president, stating that he “would protest 1,000 times” against any deal that he felt Thaçi had made in his own interests instead of Kosovo’s. Durim, a 27-year-old unemployed graduate from Peja, accused the president of using the people of the Presheva valley [the area Kosovo may gain in any territorial exchange] in order to further his own interests.

Qemajl, a professor from Prishtina, has a long history of protesting in the capital, and was present at the 1989 protests against Slobodan Milošević. He too was there to send a message to the president. “I will continue to protest whenever a politician lies to the people,” Qemajl told K2.0. “Hashim Thaçi should not negotiate on behalf of Kosovo in Brussels.” 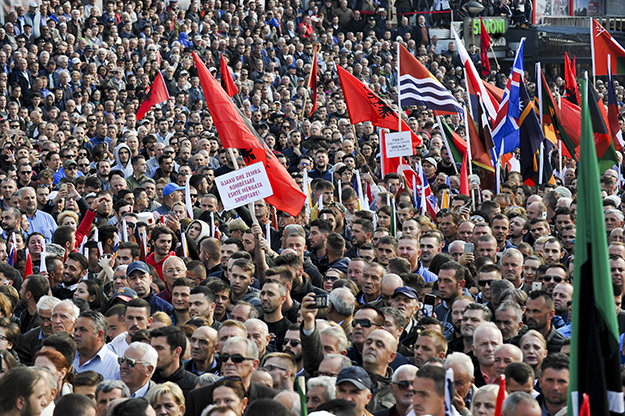 Dona, a new student at the University of Prishtina meanwhile, felt the notion of territory exchange was a continuation of aggressive policies toward Kosovo from Serbia, a theme reflected in many banners at the protest. “We have come out with my friends in protest so that Serbia’s hegemonic policy, which is also supported by President Thaçi, does not pass,” she told K2.0.

Durim from Peja felt the idea of swapping land was also not pragmatic. “It is not logical to exchange the whole of northern Kosovo for only four or five villages in the Presheva Valley,” he said. 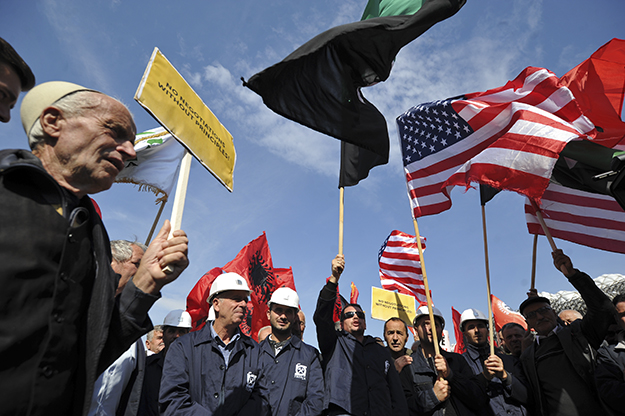 In his speech that concluded the demonstration, Vetevendosje leader Albin Kurti made reference to numerous areas in which he feels Kosovo is struggling, including its continued high rates of unemployment.

While all the protesters K2.0 spoke to felt that unemployment was a major issue in Kosovo, most felt that the idea of territory exchange was more pressing and the key issue to speak out about currently.

Despite being unemployed himself, Agon said that: “For now, exchange is the main problem in Kosovo and therefore I protest for that reason only.” Ali Berisha felt that Thaçi’s resignation would lead to social issues being resolved, and his removal should be the key aspect of any protest.

Qemajl and Durim on the other hand both felt that economic issues should also be tackled through civil protests. “I have protested for economic reasons before, and I am ready to protest in the future as well about these problems,” Durim told K2.0.