Borče Božinov: “We are dedicated to protecting and promoting sex workers’ rights.”

Working out of a central office in Skopje, the sex workers’ union of the Balkans has been operational for more than 10 years.

The status and experiences of sex workers in the Balkans aren’t things often or even sufficiently discussed in the general public. However, the hitherto difficult situation for many of them has become even more severe this year due to the COVID-19 pandemic. Because of the virus, they have lost almost all possibilities to work and earn, bringing their survival and the safety of their families into question.

However, the issues concerning the rights and status of sex wokers have not attracted the attention of a single government institution in the Balkans. Sex workers can rely only on themselves and non-governmental organizations that are willing to work with them. Except in North Macedonia.

The STAR collective of sex workers has been operational in this country for more than 10 years. They try to cover the entirety of the Balkans, and they use the tactics of a labor union.

Kosovo 2.0 reached out via email to Borče Božinov, President of STAR. That’s how we found out more about the status of sex workers in North Macedonia, the ways that they network and organize the struggle for their rights and how they have been particularly affected by the pandemic. 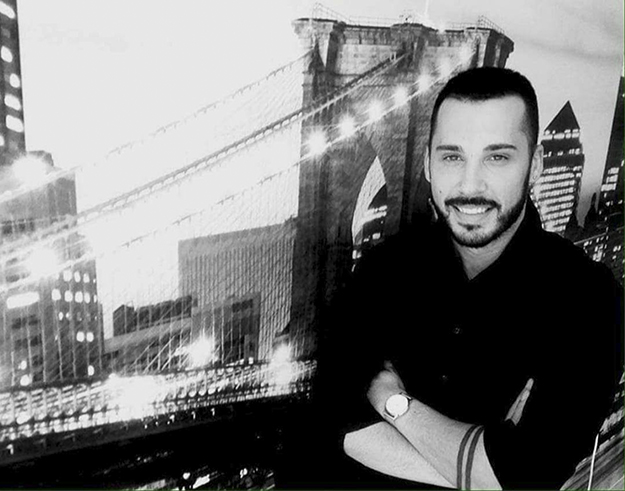 For over a decade, Borče Božinov has led the struggle for the rights of sex workers in the Balkans. Photo: Courtesy of Borče Božinov.

K2.0: Who are the members of the STAR collective, and what was your motivation to establish this type of organization?

Borče Božinov: From 2007 through 2010, STAR was an activist movement composed of a group of young sex workers with a shared goal ― to advance and promote sex workers’ rights in North Macedonia, while actively engaging people from the sex industry in implementing our programs. Recognizing the importance of the civil sector in the process of democratic governance, STAR submitted an application to the Central Register in 2010, and since then we have been registered as the Association for Supporting Marginalized Workers STAR-STAR.

With a central office in Skopje, STAR started mobilizing sex workers in several regions across the country by supporting local leaders and strengthening communities in other cities including Strumica, Gostivar, Tetovo, and Struga. In order to facilitate a favorable environment for the growth and improvement of the community, our activities involve sex workers of all kinds, no matter their sex, gender, sexual orientation, ethnicity, religion, or social or working status.

So STAR was expanded from the local to the national level, forming two branches ― the West and the East. On July 22, 2018, STAR opened a regional office in Gostivar, located in the geographic center of the western part of the country, as a basis for supporting sex workers who live and work in that region.

Recognized as “STAR — The First Sex Workers Collective in the Balkans,” for more than 10 years we have been dedicated to protecting and promoting sex workers’ rights, fighting the discrimination and stigma our community faces daily, reforming oppressive legal frameworks, and changing negative societal attitudes toward sex work.

What model are you advocating, and what does it mean in practical terms for sex workers in North Macedonia?

STAR is the first collective of sex workers in the Balkans. We are an organization led by sex workers themselves, and as such we can say that we are one of a kind.

What we are fighting for is the decriminalization of sex work as part of a broader legal reform program. Currently, there are no specific laws regulating sex work in the Republic of North Macedonia, and hence it is considered a violation of public law and order, while some other sex work-related activities (like pimping, incitement, earning money from mediation for sex services) are treated and punished as crimes. This is part of a series of selective laws that affect the dignity and human rights of sex workers, increase violence and stigmatization, and create distrust in institutions.

Why are you using the term “sex work,” and not “prostitution,” which is widespread in the region?

The terms “sex work” and “sex worker” originated from the sex workers themselves, so they could redefine commercial sex not as a social and psychological characteristic of those in the sex industry, but as an activity or way of earning income for women, men and transgender people.

The term “sex work” is more acceptable than the term “prostitution,” which has a negative connotation to it and thus is not used.

The term “sex work” is more acceptable than the term “prostitution,” which has a negative connotation to it and thus is not used. This term is offensive and linked to the stereotypes and stigma that female sex workers face in our society.

Can you explain the demographics of sex workers in North Macedonia?

In North Macedonia, a sex worker could be a man, a woman or a transgender person that voluntarily works outdoors (in the street) or indoors (apartments, flats, hotels, motels, massage parlors, clubs, etc.) and is usually between the ages of 20 and 50.

However, we cannot precisely establish the demographic data or provide an accurate number of sex workers in North Macedonia because their work isn’t regulated by laws, and thus no systems are in place to register them.

The only data linked to the estimation of the number of sex workers is mentioned in the report from the Biobehavioral Research on Sex Workers in 2014, which is now obsolete but mentions that 3,588 people worked in this industry in the country at the time. 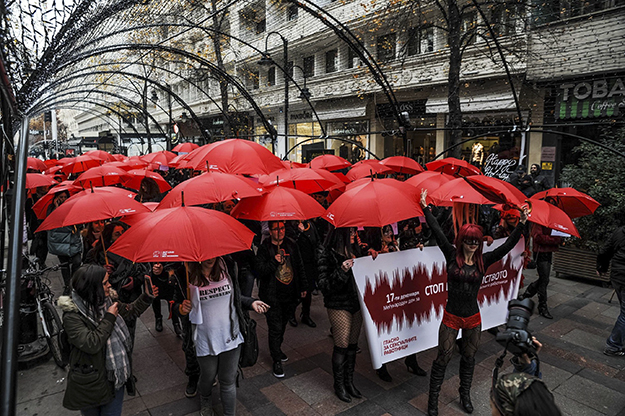 Each year on December 17, sex workers around the world observe the International Day to End Violence Against Sex Workers with “Red Umbrella Marches.” The march in Skopje gathers a big crowd of supporters each year. Photo: Courtesy of Aleksandar Crnogorac and START Collective.

We, as an organization, by means of fieldwork, have been in contact with some 300 sex workers, of which 60% are female, 35% are transgender and 5% are male. We are using a database for the project “HIV Prevention in Key Populations,” supported by the Ministry of Health. STAR is planning to start its own research in the community in order to create a database, which will further assist in the advocacy process.

When sex work is discussed, it is often mentioned that a portion of the people in the industry are victims of human trafficking or were forced to become sex workers as children. How do you find out about such cases and provide them with support, if they want to leave the profession?

Sex work isn’t human trafficking, and we as an organization have been working for more than 10 years on protecting and promoting the rights of sex workers who have voluntarily chosen sex work as their profession. Sex work is a free choice and has nothing to do with human trafficking.

Finally, one of our efforts is to institutionally separate voluntary sex work from human trafficking.

How is it possible to reduce stigma, discrimination, and violence against sex workers? What is their relationship with the police?

Oftentimes, sex workers are faced with stigma, discrimination, harassment and violence by clients, the general public and institutions, including the police. Due to this harassment, as well as general distrust in institutions, they are afraid to report violence to the police. This pushes sex workers underground, making them invisible to the system.

By organizing the “Red Umbrella March,” held yearly on December 17 ― the International Day to End Violence Against Sex Workers — STAR aims to raise awareness and reduce stigma and discrimination.

Activism by sex workers, including public events and campaigns, is one way to advocate for sex workers’ rights with policymakers and other key decision makers, the goal being to achieve social justice or societal change. By implementing campaigns and public events, and especially by organizing the “Red Umbrella March,” held yearly on December 17 ― the International Day to End Violence Against Sex Workers — STAR aims to raise awareness and reduce stigma and discrimination against sex workers, as well as change legislation related to sex work in North Macedonia.

Are female sex workers provided with any non-formal education regarding health and psychological issues, especially as those issues relate to their bodies?

STAR works on two programs: advocacy and lobbying, and the health program linked to HIV/AIDS and sexual and reproductive health and rights.

The health program, which involves regular educational workshops, aims to map out and deal with health issues that sex workers face, in order to teach the community about prevention, treatment and support in case HIV or sexually trasmitted infections occur.

We also work on problems related to employment. That is, we identify problems threatening the health and safety of sex workers. In addition to obtaining the necessary information to protect their own health, sex workers also acquire the skills needed to protect themselves from violence by clients and work safely.

We believe that decriminalization of sex work, as a form of regulation, will contribute to enhancing basic human and labor rights, and that sex work will be treated as any other profession.

The pandemic hit the whole world, and as it happens, those on the margins were affected the most. Even in richer and more developed countries throughout the world, female sex workers could not obtain state financial support and were forced to take their chances with the virus. I assume the situation in North Macedonia is the same. Has there been any support from NGOs for the most vulnerable? What are the potential solutions, since the pandemic will obviously continue for a while?

The COVID-19 pandemic has brought about tremendous change and dangers to both the general population and marginalized groups. Sex workers are in a particularly difficult situation, mostly because we have been excluded from the economic measures taken by our government. 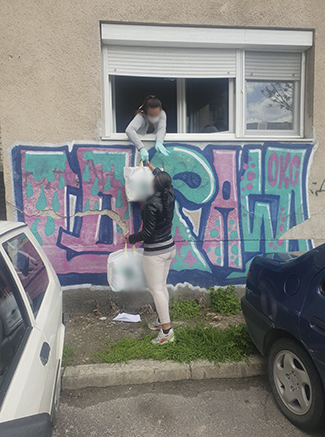 The COVID-19 pandemic made sex workers even more vulnerable. STAR organised in solidarity to provide support for all who needed it. Photo: Courtesy of the STAR collective.

As a result of this, sex workers are faced with job loss and drastic decreases in the number of clients on which their very existence depends. Apart from that, they are facing unsafe working conditions and a lack of funds for basic needs, both for themselves and for their families.

In order to support the community of sex workers, STAR has launched an online humanitarian campaign called “Action for Reaction” (Акција за реакција) to help raise funds those who are in dire need of financial assistance. Besides that, we organized a series of events to gather food and means of protection and distribute them to sex workers who find themselves in exceptionally difficult situations.

Since your name contains the word “Balkan,” do other organizations in the region turn to you? Do you think that surrounding countries will soon create their own collectives of this kind? As for Balkan states, what do you think should be the focus for protecting sex workers in the future?

When it comes to the law on decriminalization, we are unique in the Balkans in this way. STAR has been recognized as the first collective of sex workers in the Balkans but doesn’t encompass a network of several Balkan organizations.

STAR works on promoting and protecting sex workers at the national level. That is, we work in the territory of North Macedonia. As mentioned previously, we believe that decriminalization of sex work, as a form of regulation, will contribute to enhancing the social, legal and healthcare aspects of sex workers’ lives; improving basic human and labor rights; and normalizing sex work as a profession.K