Bringing back the golden age

How can Kosovo’s football clubs improve their performance in European competition?

Earlier this month, KF Prishtina and KF Trepca’89 became the first Kosovar men’s teams to take part in the first qualifying rounds of UEFA’s two premier club competitions; the Europa League and the Champions League respectively. Anybody hoping for a dream debut were quickly disappointed as both teams crashed out, Trepca losing 6-2 on aggregate to Faroese semi-pros Vikingur Gota, and Prishtina crushed by the much more fancied IFK Norrkoping from Sweden with a scoreline of 6-0 over two legs.

Prishtina’s first European games in 33 years and Trepca’89’s first competitive games against non-Kosovar opponents were met with much fanfare, but despite the enthusiasm, the return proved to be anti-climactic as both teams in the end looked miles away from the rest of Europe.

However, there was a time when Prishtina would probably have been able to at least match a team of Norrkoping’s calibre. They spent much of the 1980s in the top tier of Yugoslav football, and regularly played against the likes of Dinamo Zagreb, Hajduk Split, and Red Star Belgrade. In the 1983-84 season they finished runners-up in the Central European Cup, or Mitropa Cup, a tournament once won by AC Milan.

One man who remembers this golden age well is Ramiz Krasniqi, who played for Prishtina from 1981 to 1987, and is the current head coach of the Kosovo under-19 national football team. Even if he was on the bench that night, he remembers the euphoria of beating Red Star Belgrade at the Marakana Stadium in Belgrade in 1983. The air filled with nostalgia as he reminisced. “We had young players made up of Albanians, Serbs and Macedonians,” Krasniqi told K2.0. “It was a great achievement at the time.” 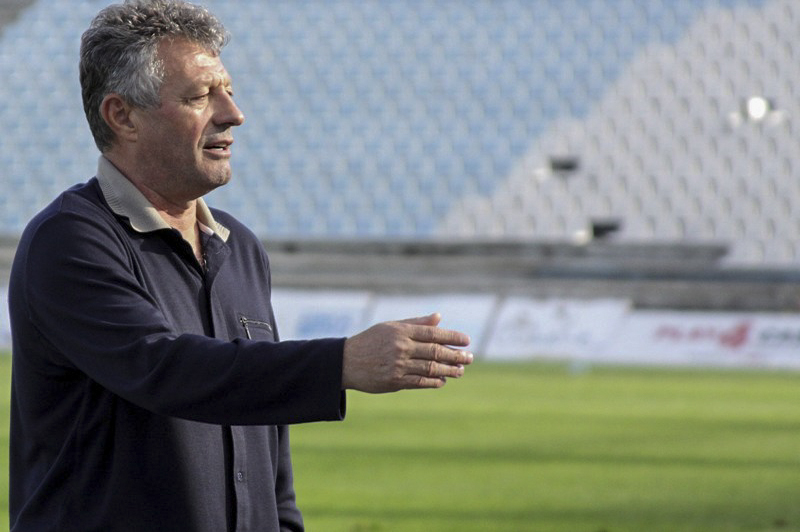 Ramiz Krasniqi experienced KF Prishtina’s golden age of the 1980s as a player and is trying to help restore Kosovo football in his role as head coach of the under-19 national team. Photo courtesy of the Football Federation of Kosovo.

Those heady days of playing and beating future European champions have gone since the dissolution of Yugoslavia and the Kosovo war. KF Prishtina and Kosovo football have all but fallen off the grid ever since. Krasniqi believes the results from both Kosovar teams’ qualifying ties is a fair reflection of their current position. “Isolation impacted Kosovo football,” said Krasniqi. “It didn’t just stagnate, it downgraded even more.”

Krasniqi points to a problem of governance when developing young talents as a key problem afflicting football across Kosovo. Kosovar clubs now often charge fees to youngsters at their academies, and most clubs take in excessive amounts of young players to keep the cash flow going, up to 40 or 50 players.

In contrast, when Krasniqi was a youth player he was given stipends for food and drinks. “It was a small amount but it felt like millions,” Krasniqi said enthusiastically, as if he just got a stipend. “Back then, players were selected because of their quality not quantity.”

It is not just Krasniqi who feels Kosovo football’s problems stem from the top. Besnik Huruglica has supported Prishtina since he was seven years old, and claims he wrote many of the chants still popular today whilst he was a member of the Plisat supporters group years ago.

Huruglica told K2.0 that the owners and board members at Prishtina do not care about the side as the players and fans do, and treat the club as a money laundering scheme, leaving the team lacking good facilities. “The people who run our club have no heart,” said Huruglica, his face showing tinges of regret.

Despite this, Huruglica is still delighted that Prishtina had the opportunity to play in Europe, and believes that the team themselves still represented the city as well as it could, especially in the second leg where the team only lost by one goal in Mitrovica. “We didn’t expect any result, it’s the third best team in Sweden,” he admitted.

"The result should be treated as a lesson learnt, a big slap in the face.”

Krasniqi’s professional eye saw things differently, and had some rather harsh critiques of KF Prishtina’s displays against Norrkoping, believing they didn’t even do the “primary school basics” right. Krasniqi highlighted Prishtina’s failure to pass with the inside of the foot accurately and consistently, especially when compared against their much more illustrious opponents. “The result should be treated as a lesson learnt, a big slap in the face,” said Krasniqi.

As a coach, he believes the desire to nurture talent should trump the desire to win trophies, especially in the current condition of the Kosovo Superleague, which Krasniqi describes as weak. Ultimately, he said as coaches they are merely the “last influence” when resources are limited and facilities are second rate. Krasniqi believes that foreign knowledge about football is required to change the “elementary conditions” with youth academy and training for Kosovar domestic clubs. “We need to invite [foreign] coaches for their experience, it’s unavoidable,” he concluded.

Huruglica, on the other hand, is more optimistic about his team’s future chances in Europe, predicting that in five years, KF Prishtina will be able to challenge stronger teams of the continent. He insists that as a fan, it’s about witnessing his team grow and playing these more experienced European teams, the result comes second. “It’s about our club being there,” said Huruglica.

He thinks the stature of the club among people of Prishtina has not changed over the years even after the war. “It’s a name worth fighting for,” he said. “All these [Kosovar] players playing abroad, they are dreaming of playing for Prishtina.”

Regardless of who is playing for the clubs representing Kosovo in next season’s competition, there is work to be done to ensure their story runs longer than the first qualifying round. Luxembourg’s Progres Niederkorn knocking Glasgow Rangers out of this year’s Europa League proves that sides from smaller nations can have a big impact on European tournaments. Here’s hoping for a Kosovar side to spring a similar surprise next year.K