Being a dissenting voice in Kosovo has never been easy. In a population of barely 2 million people, those who stand up again established norms can quickly find themselves labeled and marginalized. But when it comes to dissenting within Kosovo’s political parties, the challenges are multiplied — while all parties hail their “democratic values,” there is a prevailing attitude of “you’re either with us or against us,” and parties seem intent on stamping out any notion of internal debate.

The most recent example occurred last week at Democratic League of Kosovo’s (LDK) General Council meeting. Donika Gervalla, a veteran LDK activist — and senior member of the party in Germany — who has consistently spoken out against the direction that the party has taken under current leader, Isa Mustafa, found her entry to the meeting blocked by security guards. 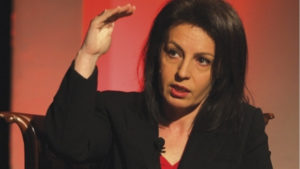 Alongside LDK Assembly deputy Vjosa Osmani — who refused to be part of the meeting after Gervalla’s ostracization — Gervalla has been one of the most outspoken internal critics of LDK’s decision to form a coalition government with Democratic Party of Kosovo (PDK) in December 2014.

Osmani’s own relationship with the party leadership has been a turbulent one, as there appears little space for disagreement within LDK. In his Assembly inauguration speech, Mustafa criticized the LDK deputies — including Osmani — that voted against forming the coalition. Osmani has also been consistently critical of the element of the agreement that saw former PDK leader, Hashim Thaci, becoming president of Kosovo earlier this year, and she boycotted the Assembly on the day of the vote.

Public communication between Osmani and Mustafa has been largely limited to exchanging Facebook statuses. Despite being the LDK deputy who received the third highest number of votes, her public statements and views on the leader have seen her political activity marginalized and her political future is uncertain.

“This is not democratic, this is autocratic”

However LDK is by no means the only party that appears to stifle internal debate, with all major parties showing little tolerance towards dissenting views. Despite the pressure and inherent perils of going against the party line, there are still individuals who challenge their own party.

One of those who is not afraid to speak his mind is PDK deputy, Nait Hasani. Hasani has publicly spoken out against the party line on many occasions, even on high profile issues where the party has presented almost total consensus. Before Kosovo declared independence, he opposed PDK’s support for the Ahtisaari Plan (that forms the basis of Kosovo’s Constitution), in 2013 he spoke out against Kosovo’s EU-brokered agreement with Serbia, he voted against establishing a specialist chamber for war crimes last year, and he has been a vocal critic of the controversial recent agreements with Serbia and with Montenegro. 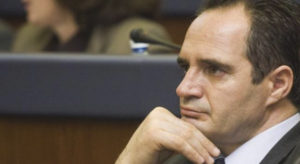 PDK deputy Nait Hasani says that the leadership of his party is centralized and the majority of his colleagues just vote as the leader of the party demands.

“The absolute majority of PDK deputies agree with my thoughts, but when it comes to voting, they vote as the president of the party demands,” Hasani says. “This is not democratic, this is autocratic and this is known as authoritarianism; as political influence that curtails the right to act freely.”

However, for Hasani all other parties are the same in this regard, so while he disagrees with many of PDK’s political positions and frequently votes against the party line, he has chosen not to switch allegiances or to give up altogether. “I prefer to fight within the party, giving my efforts tirelessly because my goal is the development of the state, rather than surrendering and going home and just watching developments on TV,” he says.

Hasani says that there are multiple pressures on deputies when it comes to taking a political stance. He believes that much of this comes from the international community, which exerts pressure on the party leadership on key issues, which is then transferred directly to the deputies.

Another serial “party-rebel” has been former Vetevendosje deputy, Ilir Deda. While his former party were locked in an escalating political standoff with the government following the signing of the agreements with Serbia and Montenegro last August, Deda frequently found himself taking actions and voicing opinions that were contrary to official party policy.

He took part in the vote to ratify the Stabilisation and Association Agreement with the European Union in November, despite his party boycotting the vote, and was told by deputy leader Driton Caushi that “Deda does not represent Vetevendosje’s official position” after criticizing activists for forcibly removing enhanced fences outside the government building earlier that year. 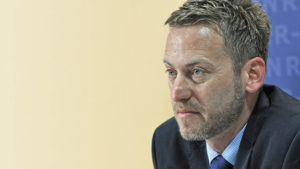 Former Vetevendosje deputy Ilir Deda believes it is essential for individuals to be able to express their own opinions within political parties.

Deda believes it is essential to have space for different voices within a political party. “In principle, I would say that internal democracy within a party is not only challenging the majority or blocking the decisions of the majority but also respecting the views of those who are not in the majority,” he says.

Having been critical of the methods used by opposition parties, which repeatedly activated tear gas in the Assembly to block its functioning, Deda left the opposition party in April after only joining in 2014. Despite the differences between party and individual, Deda’s separation from Vetevendosje marked a break from the usual acrimonious political defections. Rather than triggering the accusations from both sides that have tended to characterize such events, Deda appeared at a joint press conference with Vetevendosje’s Organizing Secretary, Dardan Molliqaj, to announce the news.

He insists that for him as a deputy, it is essential that he remains true to his own values and ideas, and doesn’t just become a political party’s puppet. “In Vetevendosje I kept the principle of not acting violently,” says Deda, who defied the opposition’s “united” approach, by presenting a compromise solution to end the political deadlock, alongside LDK’s Osmani. “The differences between [myself and the party] just deepened until we reached a point where we were conceptually far apart.”

Deda’s reference to conceptual difference is telling in Kosovo’s political landscape where political ideology can be hard to pin down. In the seventeen years since the end of the war, there has been a proliferation of political parties in Kosovo, but this has not been accompanied by a simultaneous development of clear ideological differences. “All the parties in Kosovo are right wing, all are leftist and center,” says Hasani.

Deda agrees that the notion of political ideology in Kosovo is one that remains very blurred. “PDK and LDK proclaim themselves as center-right parties but when one looks at their economic policies, they are left,” he says. “There is no ideology in Kosovo’s parties except Vetevendosje which is a left wing party. Other parties have no ideology because they do not take ideology seriously.”

In place of traditional ideas of political values and ideology, politicians instead tend to be tightly bound by history and loyalty to party leaders, rather than the program of the party.

“There is no ideology in Kosovo’s parties except Vetevendosje which is a left wing party. Other parties have no ideology because they do not take ideology seriously.”

Hasani explains that the reason that he joined PDK in 2002, and the reason that he stays now, is related to the past. “I was one of the people, along with my friends, who participated in the war and most of my friends have been part of PDK,” he says. “Therefore, I could not be out of the party that was established by my close friends.”

Deda, however, argues that the tendency in Kosovo to use history and, in particular the historical status of party leaders, as the most essential elements for joining a political party damages the potential for internal democracy. “The cult and myth of the leader is harmful for the general development of society, because people are still referring to a [political] heritage that does not belong to them; to figures who at some point had importance but who are no longer living,” says Deda.

In such a climate, the notion of challenging the party leader is not well established in Kosovo, where the leader becomes the ideology of the party and politics is heavily influenced by personality. None of the leaders of the five largest Albanian parties in Kosovo were required to beat a single opponent at the ballot box in order to take up their role; LDK’s Mustafa and Vetevendosje’s Visar Ymeri were both elected unopposed, while AAK’s Ramush Haradinaj has been his party’s leader since it was founded in 2000 (even holding the post in absentia between 2005 and 2008 when he was successfully defending charges of war crimes in the Hague). Fatmir Limaj has led newly formed NISMA since its formation in 2014, having left PDK complaining about the party’s leadership.

Deda suggests that this prevailing tendency for parties to unquestioningly back unopposed leaders, goes against fundamental democratic values. “The peak of democracy in a party is when the leadership of the party is elected according to the gained votes,” he says. 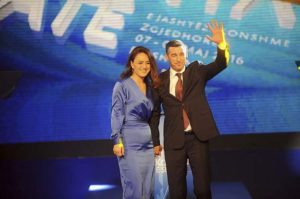 Kadri Veseli was elected unopposed as PDK’s new leader earlier this month, replacing Hashim Thaci who had led the party since its conception in 1999.

The most recent party leadership change occurred in PDK, after Hashim Thaci — who had led the party since its foundation in May 1999 — resigned his formal political roles in order to become Kosovo’s new president. Former deputy-leader, Kadri Veseli, stood for the vacant position unopposed, and was duly elected unanimously by the party, with 714 delegates voting for him and none voting against.

Asked why he didn’t stand as a candidate for the PDK presidency in order to reform the party, Hasani suggests that there is little space for free-thinkers to have an impact. “The leadership of the party is centralized,” he says.

Whereas, Hasani has chosen to remain as a critic within his party, despite having little influence to affect decision making, Deda recently announced the formation of a new political party. It will be the third of his political career, having co-founded the short-lived New Spirit Party (Fer) in 2010, before later joining Vetevendosje. “When you are marginalized you have no free space to act and then you have to look for alternatives,” he says.

According to Deda, individuals are neglected within Kosovo’s political parties and he thinks that this is a significantly hindering the development of the country’s democracy. When asked how he will ensure that there is room for individuals to express themselves in his new party, he played his cards close to his chest, but emphasized that there will be space for critics: “We have all seen how political parties have functioned and all I know is that we should not replicate the same model.” K