Last night, a crowd of protesters hurled dozens of rolls of toilet paper over the fence shielding the main government building from Mother Teresa Boulevard. Toilet paper soon littered the garden in front of the building housing the prime minister’s office and various ministries, while the crowd chanted “E keni bo mut!” (“You’ve taken a shit on it!”).

It marked the third protest in a week organized by a group of citizens in Prishtina. They have been taking to the streets in response to a series of wire tappings published by the online news portal Insajderi.

The leaked phone calls date from 2011, when EULEX was carrying out an investigation into the Ministry of Transport and Telecommunications’ potential misuse of public money. They involve key figures from the ruling coalition party, the Democratic Party of Kosovo (PDK).

Covering a two-month period, the wiretaps point to alleged misuse of power for personal favors and excessive influence over the employment process in key positions at publicly owned enterprises, the judiciary, the police force and the public university of Peja.

To date, nine wiretaps have been published (the latest today). They center around the chief of the PDK parliamentary group, Adem Grabovci, who was deputy minister of transport at the time of the recordings. He has been recorded in conversation with other PDK affiliated individuals and party members, including the then prime minister and current president of the country, Hashim Thaci, as well as the current president of the Kosovo assembly, Kadri Veseli, who at the time was not formally involved in politics. 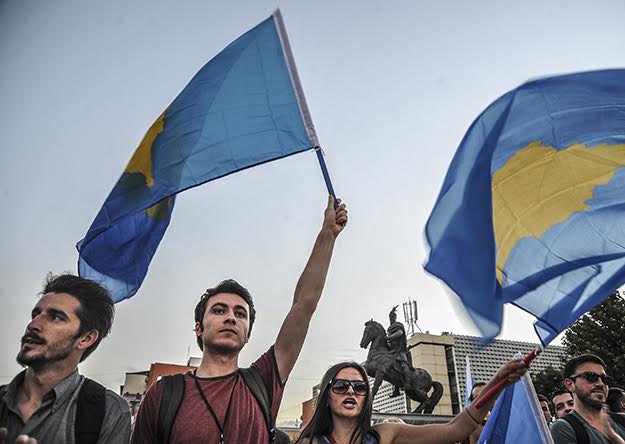 The demand of the protest is clear: political and legal responsibility for those involved or implicated in the leaked wire tappings. The government has not issued any statement regarding the wiretaps yet. However, a day after the first wiretap was made public, in an address to the Kosovo Assembly Grabovci said that “if it is a penal act and a crime to employ people and to open new jobs, then here I am, ready to go before the justice [system].”

The international community, which often issues statements in response to political developments of higher magnitude in Kosovar politics, has not yet reacted to the events. Meanwhile, 23 NGOs from civil society yesterday sent a letter to the Chief State Prosecutor, Aleksander Lumezi, requesting an investigation into the misuse of public office by high officials.

Lumezi replied last night, stating that a Commission of Prosecutors comprising of two prosecutors from the Kosovo Special Prosecutor and one from the State Prosecutors Office has been established as of August 3. The Commission will be assessing all of the original material in the wire tappings. In the letter he says, “As the State Chief Prosecutor, I assure you that no one is untouchable and if we find elements of criminal offence, then the State Prosecutor will act within all powers of the law and responsible individuals will face the law. In this regard, we have been, and are uncompromising, and the name and position of the potential suspects is not important, and we will investigate all actions of officials that are connected to some criminal offence and the published wiretaps.”

As Insajderi has announced that it will be publishing up to 1,000 wiretaps in the upcoming days and weeks, the protesters too are set to continue holding protests.

“We are listening to wiretaps only [covering] two months of 2011,” Imer Mushkolaj, one of the organizers of the protests told K2.0. “Imagine, those people have been in power for 10 years now, and just think about how much employment, influence, appointment of judges and how many scandals have happened all these years.”

“Our aim is not to gather five or tens of thousands of people in the streets but to have a consistent protest against the capture of the state institutions,” said Mushkolaj. He believes that “the crowd will grow much larger” as further wire tappings are published.

In the meantime, activists and members of the biggest opposition party Vetevendosje have already joined the protests stating that the publication of conversations between the leadership of PDK has proved the capture of the state by “criminal structures” that are in the highest rank of the state.

Opposition-led protests are nothing new in Kosovo, with this year alone seeing tens of thousands of protesters occupying Prishtina’s Skanderbeg Square on multiple occasions at the request of opposition political parties.

The current protest though is citizen-driven and for Mushkolaj, the participation of opposition members in the current protests is ‘“no big deal,” as long as no party intends to take over the lead. “The aim is not to allow anyone to participate as a political party in the protests,” he told K2.0. “But they can participate as citizens, because first of all they are citizens, then they are members of a political party. We assure the citizens that we will not allow the protest to be instrumentalized by political parties.” 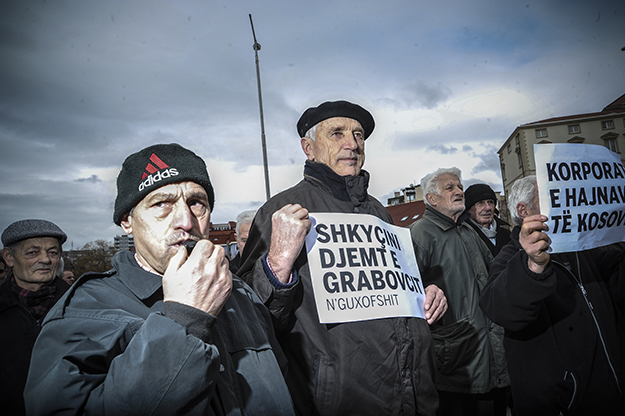 Few citizen-mobilized protests have been organized in post-war Kosovo, though March 2013 saw a group of citizens protesting against a steep rise in electricity prices. It did not result in thousands on the streets of Prishtina but it was a signal that not only political parties can gather when they have a common cause. Independent Kosovo’s first successful citizen organized protest came in February 2014, when protests by the students of the University of Prishtina put pressure on the university’s then rector, Ibrahim Gashi, due to accusations of academic fraud. Gashi eventually resigned.

However, whereas the previous two protests had particular demands, the protest against the wire tappings are calling not only for a moral and political responsibility but for legal consequences for those involved in the revelations.

The future of the protest organized by the group of citizens can hardly be envisaged at this stage but the determination of the protesters to take to the streets until they achieve their goal is seemingly steadfast. What could crucially change the direction of the protests is the magnitude of the revelations revealed in the wire tappings that may prompt thousands to join the crowd of citizens.