Citizens take to the streets demanding ‘Justice for Astrit’

Thousands of Kosovar citizens gathered in central Prishtina today to demand an independent investigation into the death of political activist Astrit Dehari. It is now nine days since Dehari died while in custody at the Prizren Detention Center; despite calls by human rights organizations for an investigation into his death, no such investigation has been launched and the circumstances surrounding his death remain unclear.

The city center appeared to briefly come to a standstill as protesters filed quietly down Mother Teresa Boulevard from Zahir Pajaziti Square, a calm broken only by occasional chants of ‘Justice for Astrit,’ ‘Without justice, there is no peace’ and ‘I am Astrit.’ When the march reached Skanderbeg Square, protesters gathered in front of the steps of the National Theater where speeches were made by the Dehari family’s lawyer, Tome Gashi, and the civil society activists who had organized the protest. 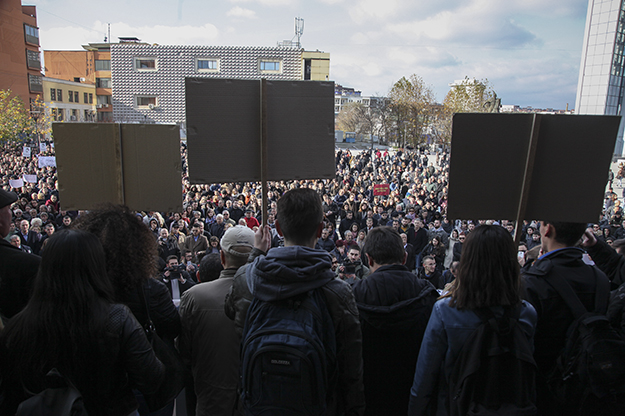 Gashi outlined some of the details of the Dehari case, which have continually leaked to the Kosovar public via various media outlets. The latest revelation over the weekend was that in the 68 days that he was incarcerated without charge, Dehari was not interviewed once, something confirmed by the prosecutor of the case yesterday.

Civil society activist Jeta Berisha made reference to this in her speech, and highlighted the universality of Dehari’s case. “The negligence shown towards Astrit is negligence towards each citizen,” she said. Berisha concluded that this negligence will only increase the resistance for justice, before repeating the calls for an independent investigation to be conducted by authorities from outside of Kosovo.

It is this universality that seemed to draw a lot of protesters out, including Adriatik Kelmendi, a well known journalist for KohaVision. “We as citizens of the Republic of Kosovo must raise our voice so that our institutions create a safe environment, because what happened to Astrit Dehari today can happen to each and every one of us tomorrow,” he told K2.0.

Another protester, Vese Kelmendi, who protested alongside Dehari in many previous demonstrations appealing for human rights, agreed with the sentiment. “In the future we could all be victims of a similar tragedy,” she said. 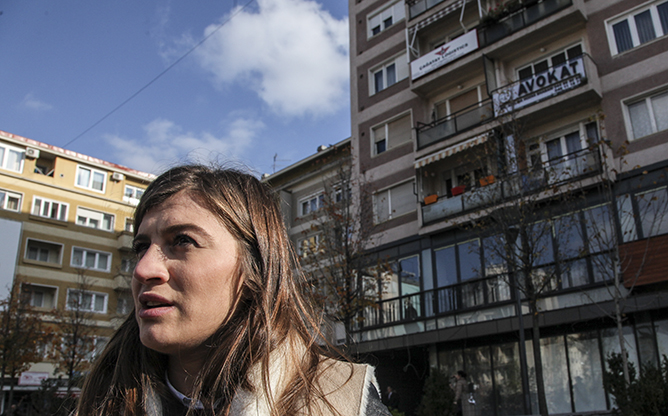 For most protesters, the demands for an independent investigation were rooted in the contradictory statements made by Kosovar officials regarding the case to date. As Dukagjin Popovci, a professor at the University of Prishtina told K2.0 at the protest: “The contradictory information that has surfaced up until now has cast a shadow of doubt on the Kosovar institutions, and I think that it is their duty to remove this shadow by launching an independent investigation that would bring the truth to the surface.”

Vese Kelmendi agreed, stating that information provided by local institutions had been inconsistent, having initially stated that Dehari had died from a medicinal overdose, before the autopsy results found that asphyxiation had been the cause of death. “I think an independent investigation is the only solution for this case,” she said.

As well as the inaccurate information coming from official sources, the leaking of information to the press also seemed to cause a lot of ire amongst protesters, particularly CCTV footage from inside the prison that was published by many media outlets last week.

Protest organizer Besa Luzha told K2.0 that she could not trust a system in which the Head Prosecutor does not have the footage of Dehari’s final moments but the videos end up leaking in the media. “This is not normal justice. This is not a normal state,” she stated. 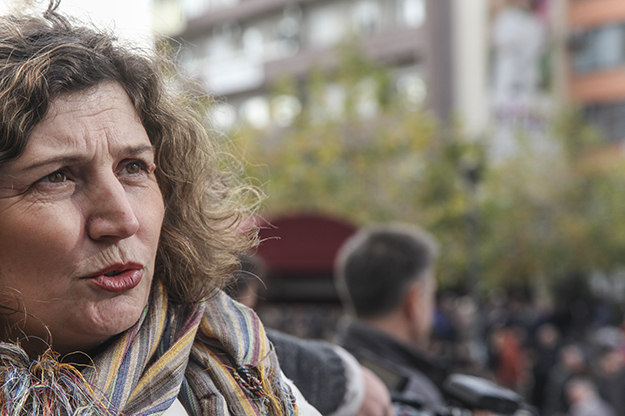 Luzha echoed the sentiments of co-organizer Berisha by calling for authorities from outside of Kosovo to investigate. She believes that it was not necessarily important which country the investigation team came from but that foreign investigators would not be encumbered by political burdens and affiliations. “Most prosecutors and policemen have come through the ‘Pronto Clan,’” she suggested, a reference to the allegations of nepotism surrounding the PDK leadership, including current President of Kosovo Hashim Thaci.

Not all protesters were unified in the view though. Avni Zogiani, a long term member of civil society told K2.0 that he does not believe that the international community can help in this case. “To tell you the truth, I do not believe in international justice either; if local justice doesn’t function, it’s unlikely for a foreigner to bring justice,” he stated. “But on the other hand, we know that it is very difficult to believe in local justice, seeing all those controversial declarations from the police and the hospital not being addressed by institutions.”

As well as an investigation, many protesters were seeking action from Kosovo’s Ministry of Justice, and for personal responsibility to be taken. Luzha said that the protest was not calling for the resignation of the minister of justice, Dhurata Hoxha, but that she was required to do her job. “If she doesn’t, and she does not have the political courage and willpower, then it’s best she leaves her position,” Luzha added. “So that the stain of having a person die in jail and not [taking] responsibility does not cast a shadow over her time in office.”

Luzha drew attention to the politically independent nature of the protest, stating that despite individuals’ political affiliations, everyone was there to demand justice. “There is no politics here,” she said. “After all, we are all political beings. I can be close to LDK or PDK, but when a citizen dies, we must all come together.”

Popovci also believed that the case had created a unifying effect amongst the Kosovo public. “I believe that this case has mobilized citizens, and this makes you understand that people cannot accept a life being lost in unexplained circumstances, without anyone being held accountable,” he said.

As for what happens next, Luzha stated that today’s protest was not the end of the quest for justice and that the organizers would seek outside help in the future if their demands were still not met. “We will not rest until measures are taken for this case,” she explained. “We will write letters to international representatives, the European Commission, ambassadors. We will tell them ‘your mouth is full of democracy and rule of law, so order and put pressure on our institutions, and ask for justice.’”K