What’s up with the diaspora? - Kosovo 2.0
Lately | Diaspora

What’s up with the diaspora?

Kosovo 2.0 discusses the important role of the diaspora.

The discussion panel, moderated by journalist Eraldin Fazliu, was comprised of: Afrim Bekteshi, the Deputy Minister for the Diaspora and Strategic Investments, Osman Osmani, the head of the Prointegra.ch professional association, Liza Gashi from the Germin organization, and Adem Ferizaj, MA in International Relations from the Paris Institute of Political Studies, who was raised in Germany. 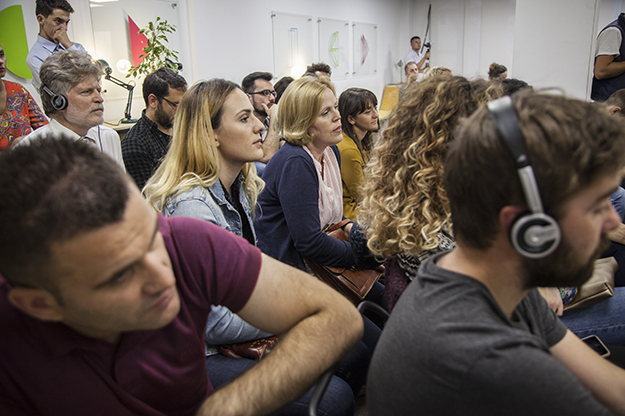 Fazliu opened the discussion with the question of whether or not members of the diaspora are seen only as a financial source, based on the second part of the name — Strategic Investments — of the Ministry of the Diaspora. He spoke about the shortage of information, mentioning the Ministry’s webpage and its lack of updates.

Deputy Minister Bekteshi said that the second part of the ministry’s name should not be problematic because foreign investments must be secured, and members of the diaspora can contribute with their connections. Furthermore, in response to criticism about the lack of activity on the ministry’s webpage, Deputy Minister Bekteshi admitted that the webpage is not functioning properly and that there is a lack of information because the ministry itself suffers from a shortage of data.

He did not offer a solution for this problem, but he said that “information is a resource which facilitates the initiation of processes,” and highlighted that he has served in his position for a short period of time.

Bekteshi went on to unfold the Ministry’s plans for the future, saying that they are preparing a new strategic document which contains four objectives for the next five years, including “the promotion and advancement of the diaspora’s political rights in Kosovo’s institutions, the preservation of the cultural identity of members of the diaspora, and the integration and inclusion of the diaspora in socio-economic processes in Kosovo.”

The deputy minister did not provide extensive details about what steps they plan to take to implement these objectives or about when we can expect to see concrete results, but he went on to criticize institutions, saying that he is “not satisfied with what has been done until now.”

After the representative from the ministry, next to speak was Prointegra.ch’s Osman Osmani, who has lived in Switzerland for more than four decades and has worked with social insurance for many years. He spoke about Kosovo’s diplomatic representation in European countries which he labelled as “full of [political] party militants, just like in Kosovo,” going on to say that this is the reason why there is no space for professionals. The deputy minister agreed with this assessment, highlighting that the same situation is found in the Ministry that he is a part of.

Analyzing the work of institutions regarding the diaspora, Osmani mentioned social insurance and the inter-state agreement with Switzerland which was annulled nine years ago. According to him, this is because professionals are not a part of institutions. Regarding this development, he also criticized the Swiss state, because the price is being paid by Kosovo’s pensioners who have worked in Switzerland for years.

“The problems that members of the diaspora face are not problems of one individual or one institution in particular, rather it is a structural problem that also affects international missions and countries that are part of these missions,” said Osmani.

For Liza Gashi, director of the Germin organization, the Ministry of the Diaspore and Strategic Investment’s budget of 1.7 million euros demonstrates the extent of the work that local institutions do, as well as their unserious approach towards the diaspora.

Gashi also spoke about 900,000 Kosovars who live in different countries — a figure provided by the Kosovo Agency of Statistics — saying that when we speak about members of the diaspora, we must not refer to them as a homogenous entity. “It is very important to understand that we cannot generalize and say that the diaspora wants this,” she said.

According to Gashi, the waves in which they left Kosovo dictate the diaspora’s way of living and the realities in which they live. “It is quite different when you meet a migrant that left in the ’60s and is a pensioner today, and when you meet his children, who have no emotional ties with Kosovo like their parents do,” said Gashi.

Based on this, she said that problems must be addressed in a few fields and called to put an end to disinformation, going on to say that we must understand that we are dealing with people of different profiles and experiences who have different objectives and approaches.

Meanwhile, Adem Ferizaj started the conversation with a story from his personal experience. While he was researching for his master’s thesis in Kosovo, he was contacted by the Kosovo Embassy in Paris. Representatives from the Embassy asked Ferizaj to provide data about the number of Albanian students in the French capital, “because the Kosovo Ambassador wanted to meet them for a cultural event.”

“What this implied is that in a European capital, Kosovar officials have no database of students from Kosovo that study in Paris,” he said, taking the example of Paris as a demonstration of the general situation regarding work that institutions do.

Furthermore, he said that the time had come to add to the criticism and analyze why the situation was not improving. According to Ferizaj, the essence of the problem is that Kosovo is a marginalized and colonized political entity which has no opportunity to act.

“So what are we expecting from politicians, who in reality have no power and are only marionettes of others who are simply satisfied that there is no longer a war going on in Kosovo?” he asked. For Ferizaj, we must first criticize our approach, then speak about other fields.

Moreover, the young man who has lived in Kosovo for the last couple of years spoke about the term “schatzi,” which according to him is a racist construct. For Ferizaj, Kosovars have borrowed this term from the hegemonic and orientalizing approach of German and Swiss people towards Kosovars living in those countries. He finds it ironic that this term finds space and is used in Kosovo, adding that members of the diaspora are being excluded in the country.

Ferizaj also spoke about job opportunities in Kosovo, saying that they are limited for all citizens.

For elaborate explanations of these points, discussions about the role of the diaspora in recent decades and in the recent war in Kosovo, as well as criticism against politicians who have worked with the diaspora in the past, follow the link below: