A digital war against extremism?

Experts gather in Prishtina to discuss using the internet against terrorists.

Twelve days after the May terrorist attack in Manchester, UK, that killed 22 people, security, cybernetics, digital rights and human rights experts gathered in Prishtina to discuss the questions that arose globally after the attack: Are we doing enough to prevent terrorist attacks, and how can the internet be used in this regard?

The panel discussion was part of a two-day conference held on June 8-9 titled “For a common agenda for digital rights.” Organized by NGOs LENS and the Kosovar Center for International Cooperation (KCIC) it brought together guests from around the world. 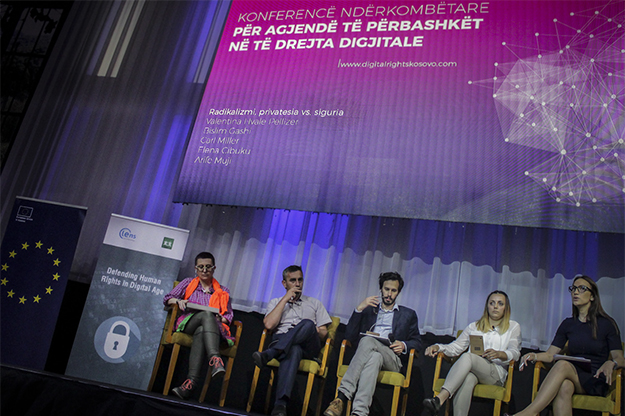 Moderating the panel on radicalism, privacy and security on the internet was Carl Miller, founder of the digital society research unit Center for Analyzing Social Media (CASM), part of the UK-based think tank, Demos.

Miller started his speech precisely by speaking about the terrorist attacks that were committed in Manchester on May 26, saying that such attacks make debates that revolve around extremism on the internet, and the problems that arise as a result of it, an absolute necessity. 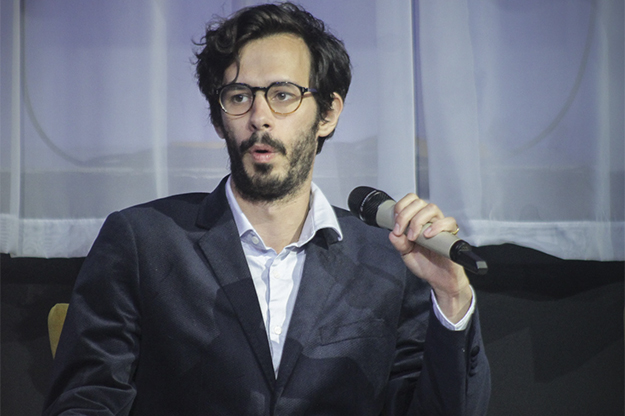 He referenced British prime minister, Theresa May, who after the attack said that we must oppose extremism at all costs, including on the internet. “By ‘oppose’ we mean: opposing [extremist] ideologies and the role of the internet in this course of action, stricter actions [by security authorities] on the internet with events that relate to extremism, segregated online communities and their role in extremism, stricter punishments for people involved in extremism,” said Miller.

Bislim Gashi, who works as an official for personal data protection at the Judicial Council of Kosovo, highlighted the participation of Kosovar citizens in wars in Syria and Iraq with self-proclaimed terrorist organizations, labelling it as a complex problem. 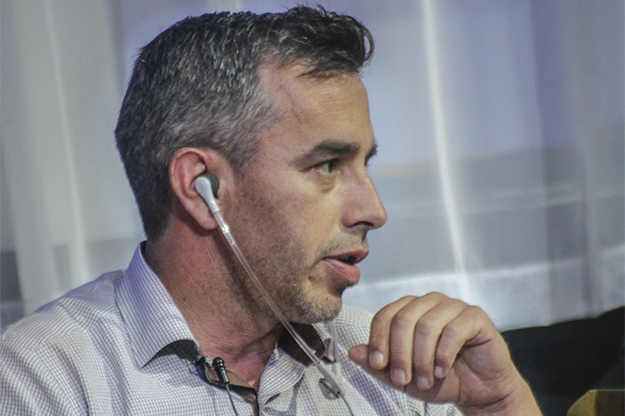 According to Gashi, extremism in Kosovo is “in its first stages” and has not yet managed to lay down its roots in Kosovar society. Gashi bases his assessment on his experience of judicial sessions involving people who were accused of taking part in wars outside of Kosovo, in which he said most of the accused regretted their actions. He went on to say that the same remorse is often absent in Albania, with defendants rarely expressing regret for their involvement with extremist groups. Furthermore, some have declared that they do not recognize the Albanian judicial system.

Arife Muji, researcher at the Kosovar Center for Security Studies, spoke in more detail about Kosovar citizens’ involvement with organizations like ISIS and Al-Nusra in Syria and Iraq.

Muji highlighted that the trend of Kosovars going to wars in Syria and Iraq was at its peak in 2014, especially among young people, however this number has been reduced globally in recent years. However, according to Muji, neither Kosovo nor Western countries were prepared to handle cases with certain groups that represented extremist ideologies. 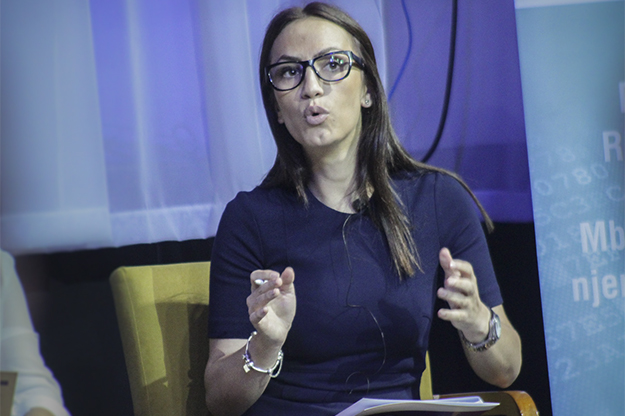 Muji also mentioned a law banning involvement of Kosovars in foreign conflicts that was approved by Kosovar institutions in 2015 as one of the most direct measures taken by the state in fighting extremist ideologies.

“One of the key problems today in tackling extremism and people that have taken part in these wars is the experience that we lack as a society and as state institutions in dealing with cases of people that have return from such wars,” she said. Among these problems she also mentioned the way in which Kosovo deals with prisoners and individuals that attempt to reintegrate into society upon their return home.

One of the recruitment methods that organizations such as the so called Islamic State (or ISIS) have used to attract supporters is that of sending indoctrinating messages through the internet, something that continues to this day.

Elena Cibuku is a web developer at Albanian web design and development organization Pro Code Developers and has researched and analyzed propaganda messages written in, or translated to, Albanian on Facebook and other online platforms. Cibuku shared her experiences from her research and argued that in both Albania and Kosovo state institutions need more professionals that can access cybernetic spaces.

“This would enable [the two countries] to monitor and control different potentially dangerous online activities,” she said. 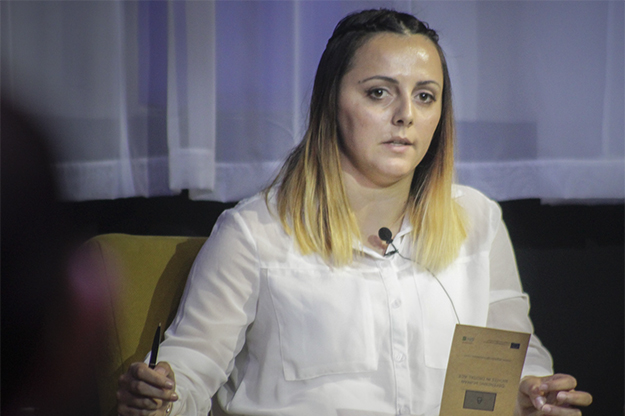 According to Cibuku, messages by extremist groups and individuals usually include key words. This makes it necessary for security institutions to have people that can operate cybernetic spaces and easily recognize propaganda messages, as such enabling institutions to react and receive the content of such messages.

Valentina Hvale-Pellizer, a women’s rights activist now working for online knowledge sharing website, One World Platform, highlighted that alongside online security comes the need to defend the people’s human rights. Hvale highlighted that when considering security and data collection through the internet — something that currently occurs at a global level — initially we must know “whose security is at stake and what the objective is.”

She mentioned that in today’s world one can collect data on the internet and, in a way, decide “who is the best and who is the worst … and within a day you can find yourself as part of either of these labels,” she said. 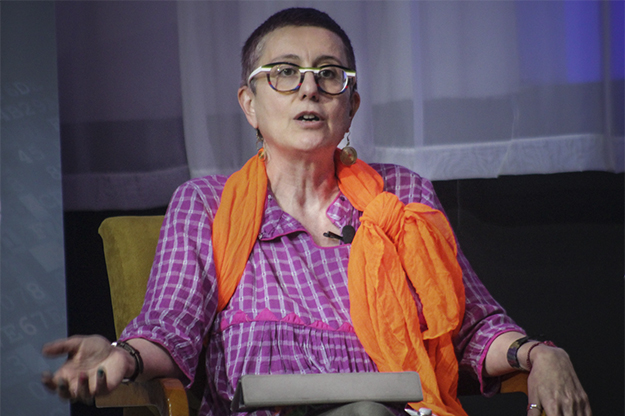 Miller raised the issue of message encryption in different communication platforms throughout the world, and the continuous tendency of security institutions to have more and more access in these platforms. He asked a direct question to the panel members: Should governments be allowed to do such a thing, considering the right to privacy, as it is a basic human right?

Hvale answered him with another question: Should we get rid of a door key just because a robber who manages to enter the house may then use the key to lock us in?

She said that she believes that the argument that governments and corporations gather vast quantities of people’s data in the name of security is an invalid one. She believes that governments are becoming lazy, and as such they expect to be readily served information from communication companies, pressuring them and attempting to use use this data in their daily affairs.

Hvale said that she believes that intelligence agencies must do their jobs better, also mentioning recent terrorist attacks in Paris, in which French authorities were aware in advance of text messages exchanged by the perpetrators, as well as their activities.

On the other hand, Cibuku said that she understands that people want to be able to communicate with others without being watched by third parties. However, when we get to a point in which communications are not intercepted, she said, then it is always argued that this is one of the causes of terrorist attacks and similar incidents.K