Preparing for the new world order.

Fear not, DOKU:TECH has not abandoned DokuFest, where the innovative tech conference was initially hatched. However, DOKU:TECH is above all a platform, whose main base is its great supportive community, not only in Kosovo but also in the region and around the world, at least according to its producer, Kushtrim Xhakli, who confirms that it will still have a presence in Prizren come August.

In recent years, DOKU:TECH has become a cherished event in Kosovo’s cultural calendar, bringing together dozens of thinkers, tech talents, entrepreneurs and other bright minds who are helping to shape today’s fast paced world. “We’re bringing you innovators who are pushing the boundaries and breaking the walls to move us all forward,” reads its website.

This year the organizers aim to bring “Fear, Hope and Everything in Between,” the name and the theme of the two day event, which runs from June 10-11. “There are many moments in history when the fear of technology has been equal to the hopes that people had for it,” says Abetare Gojani, Program Director of the IPKO Foundation, the main organizer of the event, adding that both fear and hopes for technology are well founded. “Globalism driven by technological development has pulled millions out of poverty, but has also created the situation where the seven richest people possess more wealth than 50 percent of the world’s population.” 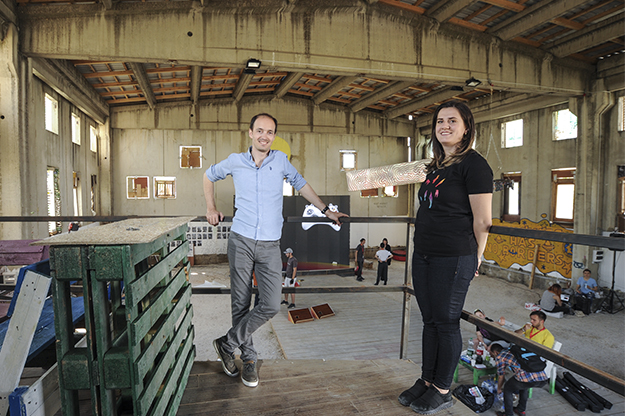 DOKU:TECH producer Kushtrim Xhakli (left) and the IPKO Foundation’s Abetare Gojani (right) are preparing to open up the doors of Prishtina’s Termokiss to get the weekend of innovation underway. Photo: Atdhe Mulla / K2.0.

Then there is everything else in between, Gojani explains, everything that informatics has allowed to proliferate, such as armies of online “trolls,” propaganda, surveillance, but also more positive developments, such as globally linked journalists unearthing major scandals including the Panama Papers.

It was for this very reason, to discern the blurred lines of today’s society that has willingly locked itself to technology to such an extent that life without it would become harsh survival, that DOKU:TECH was created. “With the birth of new technologies, new perceptions are also born in society that are not usually in equal harmony,” Xhakli says. “The purpose of DOKU:TECH is to explicate these perceptions from many angles, including the positive and negative sides of technology.”

This is not the first time DOKU:TECH has ventured to Prishtina; last year organizers brought Laura Mersini Houghton, the Albanian-American cosmologist and theoretical physicist, to Kosovo’s capital for a lecture on ‘the multiverse hypothesis.’ But due to the tech fest’s growth, from this year onwards, the ‘main event’ will be held in Prishtina, and will continue on to Prizren during the city’s International Film Festival in August, for a single day — this year to be held on August 5.

Organizers hope that by hosting the weekend event in Kosovo’s primary city, it will make it more accessible, not only as it is a domestic hub for people from all municipalities, but also because it is more convenient for the numerous regional and worldwide visitors who attend DOKU:TECH each year.

The poetry of programing

This year’s program runs from 12:00 each day and is once again divided into workshops, masterclasses, DIY (do it yourself) sessions, and talks, with activities hosted both inside of the Termokiss venue and outside in its courtyard. Parties at Club ‘M’ will go on into the night with a number of “thinking DJs,”  lined up. 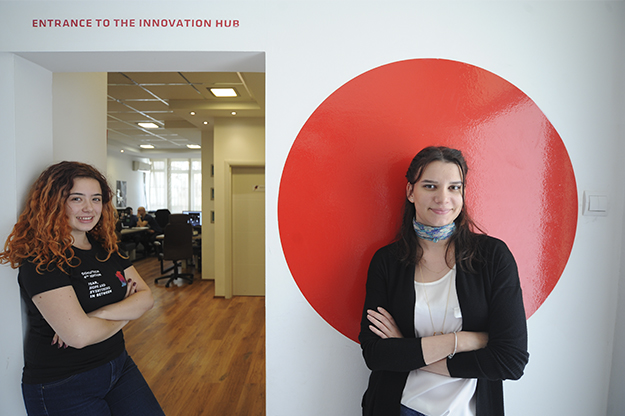 Nita Prekazi (right) from the IPKO Foundation is one of those who has helped to ensure another strong line up for DOKU:TECH 2017. Photo: Atdhe Mulla / K2.0.

Prekazi also highlights a workshop by the communications service provider Orange on “Why hybrid cloud matters,” pointing out its relevance for both upcoming and existing companies in Kosovo that are seeking cloud services solutions. For others who are interested in finding out about something new, a hint: It has nothing to do with the white fluffy things in the sky!

This year also sees a treat for gamers…. Game designers and curators will bring a taste of the renowned A MAZE Berlin International and Independent Games and Playful Media Festival to Kosovo, through exhibitions and ‘Hypertalks,’ including one by A MAZE Festival founder and artistic director, Thorsten Wiedemann.

“The majority of these speakers ask for a fee of at least 30,000 dollars, but we have managed to bring them without a cent,” Prekazi says, with pride. “As the IPKO Foundation, we try to bring these speakers to DOKU:TECH because Kosovars do not have the opportunities to travel abroad to listen to them, so we bring them here for free.” The organizers explain that the majority of the invited speakers do not focus solely on technology, but they have also managed to bring about social changes as well.

One of the highlights of the program is a talk entitled “Hacking the Law,” by Birgitta Jonsdottir, a current member of Iceland’s National Parliament through her Pirate Party of hackers, as well as a leader, reformer, poet and anarchist. “They [the Pirate Party] consider hacking, coding, and programing, a kind of poetry and call themselves ‘poeticians,’ not politicians,” Prekazi says.

More than 3,000 people are expected to attend over the two-day event, the largest number of visitors that the still under construction Termokiss building will have hosted since it first opened its doors last year. Organizers believe that there will be something for everyone, not just techno geeks, because today’s young people are the first generation to experience the technological world, and the speakers will help visitors to make sense of the complex processes that are shaping their lives on a daily basis.

DOKU:TECH’s website invites people to “listen, question, doubt, suggest and discuss,” in order to prepare themselves to solve the “problems lying just around the corner.” The weekend will also allow attendees to prepare — because Artificial Intelligence is not just a Spielberg movie anymore.K