Dying on the roads

“I cannot turn and look at this part knowing that my son died here,” Fidan Haziri says. “I walk on the other side of the road and have never walked over here since it all happened.”

With pain etched across his face, his eyes well up as he looks at the scene where his 12-year-old son was recently killed. On June 29, a car plunged through the crash barriers outside the village school in Koshare, Ferizaj, fatally hitting young Endrit.

Six weeks since the tragic accident, the Haziri family continues to be horrified by the unfixed scene and the wreckage of the crash barriers no more than 100 meters from the family home. “The municipality has to react,” Haziri says. “They have to take measures and not leave us with open wounds as a family.” 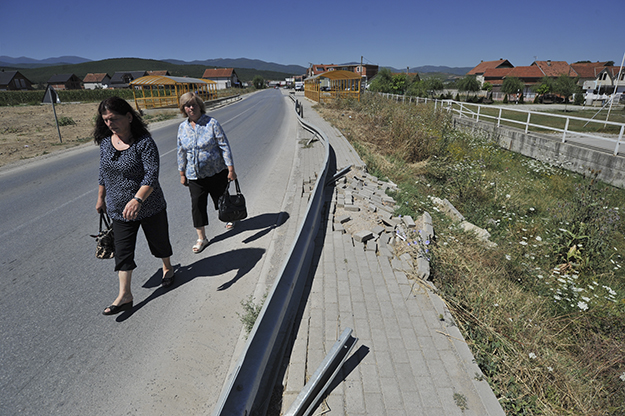 The crash barriers outside the school where Endrit Haziri was killed by a car six weeks ago has yet to be fixed. Photo: Atdhe Mulla / K2.0.

As well as trying to come to terms with their own tragic loss, Haziri and his family are concerned that the lack of measures from the authorities to fix the scene is endangering other children who need to walk on the same pavement on a daily basis. “It happened to my son but, inshallah, it does not get repeated to someone else as the danger is even more present now,” Haziri says.

The bend where Endrit was killed has already proved fatal in the past. Just a few meters from where the young boy was hit, a memorial two German soldiers stands where they died in a car accident just after the war and villagers claim that other fatal accidents have also occurred on the dangerous bend.

While appeals have been made for the Municipality of Ferizaj to intervene, the Ferizaj-Shtime road in question is a regional route and its maintenance is actually the responsibility of the Ministry of Infrastructure.

Burim Krasniqi the acting head of the Department for Coordinating the Council for Safety of Road Traffic within the Ministry of Infrastructure says he feels the concern of Haziri family but points to the difficulty in maintaining thousands of roads across Kosovo, stressing that procedures needs to be followed. “I understand the concern of the parent and the need to see the scene fixed in order not to relive that moment, but I believe that very soon it will be fixed,” he says.

However, Krasniqi insists that even when fixed, the risk will remain prominent as it is part of wider issues regarding the safety of Kosovo’s roads, on which 110 people were killed in traffic incidents last year.

“Whatever metal barrier you install, if someone is driving at 100 km/h they will hit children again,” he says. “Metal barriers are more there to divide the children or pedestrians from the cars rather than for big security as a metal barrier will not easily stop a car if the driver is going 100 km/h.”

According to statistics secured by K2.0 from the Ministry of Infrastructure, Endrit is one of 11 children aged 0-12 to have been killed on Kosovo’s roads in the first six months of 2017; this represents an almost 200 percent increase from the first half of 2016 when four children died. 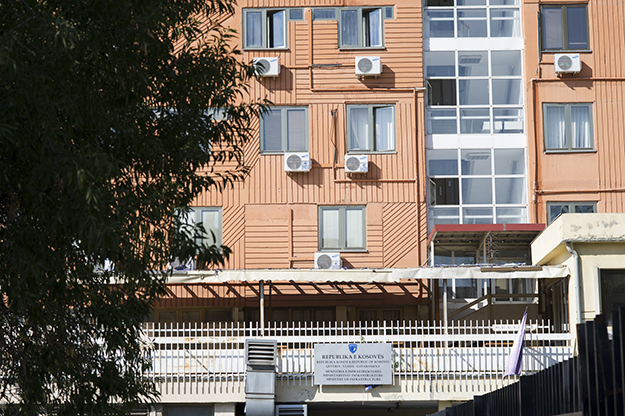 Maintenance of regional roads are the responsibility of the Ministry of Infrastructure, where officials point to dangerous driving and poor police enforcement as reasons for a recent spike in road deaths. Photo: Atdhe Mulla / K2.0.

This summer, other media reports of traffic accidents have caused shock in society, with 17 deaths on the country’s roads in July alone. The hashtag #NdaljaGazin (#StopTheAccelerator) has been shared widely on social media as part of an online campaign by citizens to encourage safer driving.

Part of the issue appears to be the heavier summer traffic with many more cars on the roads as members of the diaspora flood to Kosovo for vacations, adding to an already existing problem.

Five members of the diaspora were killed in traffic incidents in the last few days of July. Among them were four people from the same vehicle in a shocking incident on July 28, when a speeding car left the main roundabout of Prishtina that interlinks the capital city with many other cities, crashing through metal barriers and onto the ground below. Earlier this week (Monday, August 7), a car with Swiss plates killed two teenage pedestrians in Gjakova.

In response to the high number of accidents, Kosovo Police last week (Tuesday, August 1) established a special task force, which it says will extensively patrol across Kosovo.

Burim Krasniqi from the Ministry of Infrastructure believes that stricter law enforcement by police is overdue and can help to reduce the number of accidents. “The tendency to be polite with our diaspora has created situations where the police are not strict enough,” he says.

According to a police report obtained by K2.0, this year police have actually issued more fines to drivers, although it doesn’t appear to have impacted upon the number of fatal accidents. More than 183,000 Kosovars were fined during 2017 in comparison to more than 161,000 in 2016 but while 59 people were killed on Kosovo’s roads in the first six months of last year, that number increased to 70 in the same period this year.

Bajram Krasniqi, the press officer for Kosovo Police says that there are a number of reasons why accidents occur, but that the human factor is the main cause. “In general, if these roads were of a higher standard, then it is possible that we would have less accidents,” he says. “However, the human factor is the key and we cannot blame the government or municipalities by saying that there are no good roads. We are all guilty that these accidents are happening.”

“If the police patrol during the night, I am sure that over 70 percent of drivers are under the influence of alcohol.”

One of the issues identified by both Krasniqi is that of drink-driving, a widespread phenomenon in Kosovo that has been linked with a number of fatal incidents.

Reducing the number of people driving under the influence of alcohol stands as one of the objectives of the Ministry of Infrastructure’s Road Safety Strategy and Action Plan for 2016-2020.

The police spokesperson says that the consumption of alcohol often leads to speeding, which results in increased road accidents, and insists that they are trying to halt this phenomenon. “Police are seeking to identify the places where parties and weddings are happening,” he says.

The ministry’s Burim Krasniqi believes that once the police have identified people drink driving, they need to take harsher measures to act as a deterrent in future. “If the police patrol during the night, I am sure that over 70 percent of drivers are under the influence of alcohol,” he says. “The police should demand that another driver immediately comes to take the car, or they take the car themselves with a tow-truck and issue a high fine — I guarantee that next time the [driver] would not drive under the influence of alcohol.”

Drink-driving has been linked to the four recent deaths in the incident on the main Prishtina roundabout, although the police point out that the autopsy process is still ongoing and should not be pre-judged. 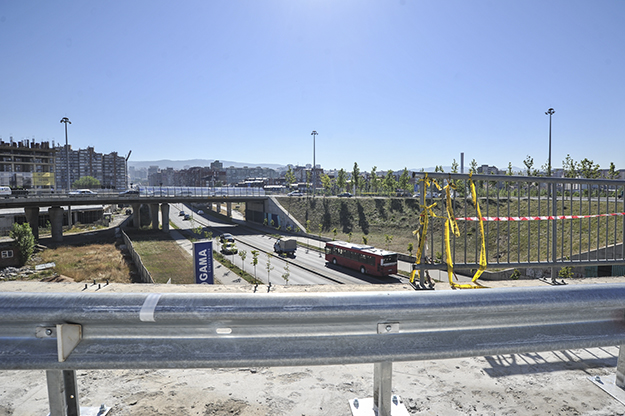 Four members of the Kosovo diaspora were killed in July after their car crashed through metal barriers and over the edge of the raised roundabout. Photo: Atdhe Mulla / K2.0.

Referring to this particular incident the ministry’s Krasniqi believes that questions that have been raised about road infrastructure are wide of the mark. “Concrete barriers are not a solution,” he says, following calls for improved safety measures on the roundabout. “The solution is respecting the speed limits and the traffic signs.”

The ministry official highlights that in general a lot of money is being spent on maintaining Kosovo’s roads, with extra costs incurred as signs are often removed by citizens. The budget of the Ministry of Infrastructure for 2017 was 305 million euros out of the state’s total budget of almost 2 billion euros.

“I don’t believe that there is a road in Kosovo in a bad state or lacking traffic signs,” he asserts. “If we take into account that in every place where we have had fatalities there have been traffic signs.” 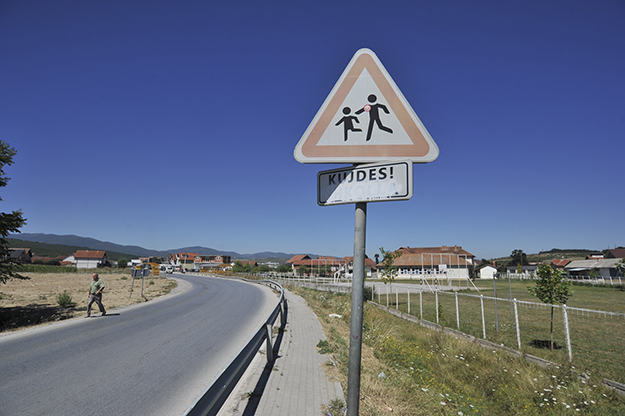 Ministry official Burim Krasniqi says there is no problem with road signs, such as this one near the crash site in Koshare, but rather that drivers are ignoring them. Photo: Atdhe Mulla / K2.0.

He highlights one of the main challenges in terms of tackling the high number of road deaths, is a lack of effective cooperation between institutions and insists that institutions need to work together more closely in order to effectively the problem. “The cooperation with the police is relative but it is not at a satisfactory level and I say that with full authority,” Burim Krasniqi says. “We have some regular reports but we do not have details of … accidents and particularly we need [more] details on accidents with fatalities.”

The acting director also points to preventative measures that the ministry is attempting to put in place to help prevent traffic accidents, including ensuring greater integrity of the driving license issuing process. This process has been questioned, with allegations that officials have been bribed into helping applicants with their driving theory test, which must be passed before they pass onto the practical part of the test.

“We have the scrutiny of cameras [in testing centers] so that those driving licenses that are issued are merited,” he says. “I believe that within this year electronic testing through computers will also begin so that we have zero tolerance for any misuse of the process.”

In the long term Kosovar institutions might be individually pushing forward policies that will decrease the high number of people dying in traffic. But with the issue having many facets, a wholesale approach to the issue by all responsible institutions will be required to start saving lives on the roads. In the meantime, until a coordinated approach is found, families like Haziri’s will continue to suffer the tragic loss of their loved ones.K

Women should make decisions about their own bodies