The European Union has reached an agreement with Kosovo’s authorities that keeps its Rule of Law Mission in Kosovo (EULEX) active until at least June 2018. The details of the new mandate and the future role of the mission are full of uncertainties, but judging by what bits of information have emerged, EULEX will enjoy less power over Kosovo’s justice system.

EULEX has been operating in Kosovo since the state first declared independence on February 17, 2008. The mission was tasked with tackling corruption at the highest levels, fighting organized crime and conducting trials investigating allegations of war crimes during the 1998-99 war in Kosovo.

Over the last eight years, EULEX has assisted, monitored and advised in the field of rule of law, while maintaining certain executive powers over the Kosovo judicial system. Namely the ability to open investigations, indict citizens and hold court proceedings in regard to cases involving war crimes, corruption and organized crime.

A recent European Council decision has agreed to extend the mandate of EULEX up until June 2018. EULEX has been granted three previous extensions; in 2010, 2012 and 2014. However, unlike these prior extensions, the fourth prolongation of the mandate is said to feature ‘substantial changes’ to the mission’s role and its competencies.

The full text of the agreement between the EU and the Kosovar state regarding the new mandate is not yet public, and will not be until its publication in the government’s official gazette, expected sometime in the near future.

However, EULEX have issued a press release that unequivocally confirms a diminishing of powers for the mission. The statement asserted that “as a matter of principle, all criminal investigations and new trials will be conducted by the Kosovo authorities, with a judicial panel composed of Kosovo judges.” It went on to make clear that new cases can now only be opened by EULEX with the approval of the Kosovar judiciary, though in “extraordinary circumstances, a case can be assigned to EULEX or a panel be composed of a majority of EULEX judges.”

Asked to explain what might constitute ‘extraordinary circumstances’, a spokesperson for the EU’s External Action Service, Maja Kocijancic, told K2.0 that “those circumstances will have to be assessed against each and every specific case, the sensitivity and the complexity of which may require the assistance of EULEX.”

What has been made public is the budget of the mission. From June 2016 to February 2017, 34.5 million euros will be ascribed to EULEX and additional 29.1 million euros for the specialist chambers and the specialist prosecutor office; according to the European Council’s approved budget, which was announced alongside the decision to extend the mission’s mandate.

One other conclusion can also be drawn about EULEX’s future role in Kosovo without seeing the printed agreement — EULEX will no longer be engaged with the conducting of trials investigating allegations of war crimes. A special chamber for conducting such trials has been established in the Netherlands and is expected to become operational soon.

This special chamber will initially deal with the allegations from the Council of Europe’s rapporteur, Dick Marty, who claimed that war crimes, including “organ harvesting” were committed by the KLA leadership in the 1998-99 war in Kosovo. One of the main reasons for forming the special chamber was the “failure” of EULEX to secure a decent witness protection program. That led to the establishment of a court in the Netherlands, over 2,000 km away from Kosovo. 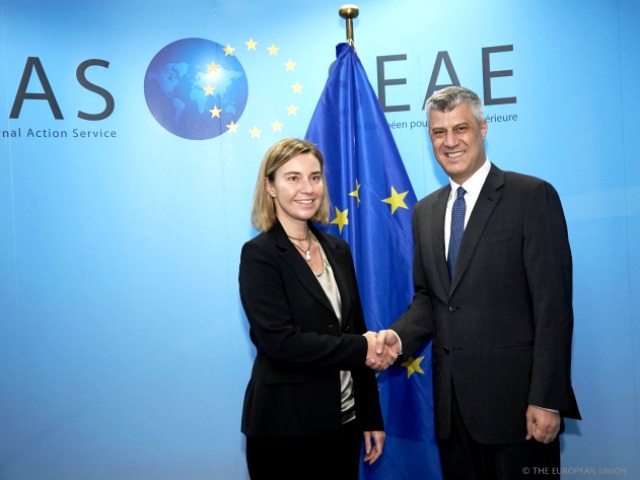 An exchange of letters between Kosovo’s President Hashim Thaci and the EU High Representative for Foreign Affairs and Security Policy, Federica Mogherini, paved the way for two draft laws outlining an extension of EULEX’s mandate to be sent to Kosovo’s assembly for ratification. With 84 votes in favor and five against, the draft laws were passed on June 17, with over two thirds of the 120 overall deputies approving the laws.

There was however, a slight issue of timing. EULEX’s previous mandate expired on June 14, and Mogherini did not send the reply letter until June 15, leading many to speculate that the EU and Kosovar authorities may have disagreed on EULEX’s new role. Kocijancic refuted such claims, telling K2.0 that there was no disagreement between parties, while negotiating the new mandate of EULEX.

“EULEX has a complex mandate stretching over justice, prosecution, police and correctional services,” she said. “It deals with sensitive cases. In this context, one can easily understand that the negotiations take time and as said we are satisfied with the outcome.”

The late letter though, has also caused issues with the functioning of the courts. Legal procedure, as dictated by the constitution of Kosovo, requires laws that are adopted by the Assembly to be decreed and signed by the President of the Republic of Kosovo within eight days of receipt. After the president has signed the laws, they must then return to the Assembly to be approved, before they are published in the government’s official gazette. Only once they have been published for 15 days, does the law enter into force.

As of today (June 24), the passed draft laws are still yet to be decreed by President Thaci. The reason for his delay is unclear, and is only prolonging the amount of time for which EULEX have no mandate in Kosovo. According to the Constitution, his deadline to sign is tomorrow (June 25).

On June 15, due to the absence of this legal mandate, EULEX was forced to reschedule court proceedings up until the mandate was officially extended. Currently, even though the draft laws have been passed by the Assembly, they have no legal grounding until the formal process has been completed.

“EULEX judges and prosecutors will execute their functions in compliance with the applicable legislation in Kosovo,” the EULEX press office told K.2.0. When asked whether that means that all court proceedings will be suspended up until the president promulgates the draft laws, EULEX’s press office refused to comment. However, Arianit Koci, a lawyer from Prishtina, has today (June 24) confirmed that all the proceedings planned for next week have been rescheduled and it seems all the court proceedings will be suspended up until the decree of the president.

The ‘Jean Paul Jacque report’ and the new mandate 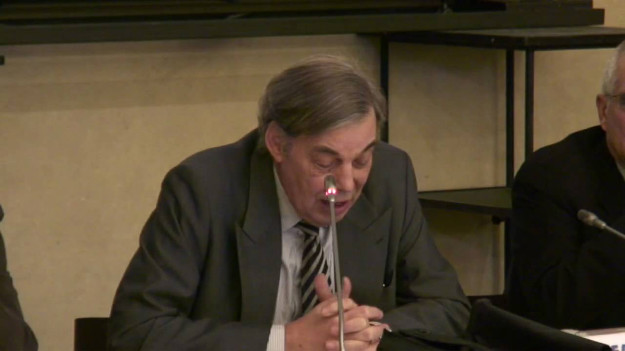 EULEX has often been accused of a lack of transparency and accountability. In particular, the mission was hugely discredited by internal accusations of bribery and corruption by former EULEX prosecutor Maria Bamieh in November 2014. In response to the claims, Mogherini tasked renowned professor Jean Paul Jacque to shed light on the situation by conducting an independent investigation into Bamieh’s allegations.

After months of investigation, Jacque authored a report, which amongst other things, gave clear recommendations on the future role of EULEX in Kosovo. “In the current scheme of things,” the report stated, “Kosovo’s judicial system does not yet seem capable of meeting the challenges posed by corruption and the organised crime linked to it.” The report added that if the executive branch of EULEX were to be eliminated, “a number of proceedings would be lost and forgotten.” In this regard, it seems that the new mandate does not reflect the recommendation of professor Jacque and his concern over proceedings “being lost or forgotten.”

The report also called for changes within the mission to “save the face” of the European Union as levels of corruption in Kosovo had not seen any stark improvement. If anything, the issue had been exacerbated by the EU’s engagement. In a 2010 progress report, the EU stated that “Kosovo’s justice system is weak,” and that corruption remained one of the major obstacles for Kosovo’s future.

Five years later, things hadn’t much changed. The 2015 progress report highlighted more than once that Kosovo judiciary was harmed by “endemic corruption.” With the latest development that EULEX’s powers will be reduced, the question over how EULEX will continue to efficiently combat corruption is raised.

However, some local commentators approve of the weakening of EULEX’s jurisdiction. “The local judiciary can never improve if serious crimes are delegated to the internationals,” Besa Shahini, an independent policy analyst based in Prishtina told K2.0.

According to Shahini, the EU have deliberately not achieved results in fighting serious crime that is linked with high profile politicians, as “the EU’s interest is conducting a dialogue between Kosovo and Serbia,” and willingness to engage in this dialogue protects politicians from EULEX’s clasps. 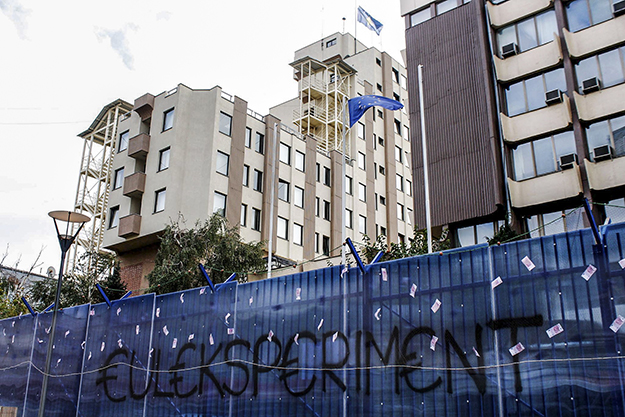 There have been both internal and external voices demanding changes to EULEX’s role in Kosovo. Vetevendosje, the third biggest party in the assembly of Kosovo has even called for EULEX to be shut down, labelling it as a “failed mission” due to its “poor performance” in improving the rule of law in Kosovo. The party refused to be part of the session when voting took place to extend the mandate of the mission.

Shahini also thinks that the mission’s mandate should not have been extended. “I think that based on both principles and in practice, EULEX needs to go,” she told K2.0. “It has been proven many times that international organizations that do not feel responsibility towards the local elected structures, and cannot bring justice in places like Kosovo.”

Nonetheless, the letter of consent from Thaci to Mogherini, backed with the support of over two thirds of the state’s MPs, means that the extension of the mandate seems to have the support of Kosovar institutions up until June 2018, at least officially.

The exact future role of EULEX is still not clear, but that the mission’s jurisdiction and competencies have retracted seems in little doubt. “No one disputes that the Kosovo judiciary will continue to require support and assistance in the coming years,” Kocijancic told K2.0. “But the clear message under the exchange of letters is that Kosovo’s judicial authorities are primarily in charge.”K