On the second floor of the Museum of Kosovo, a smaller gallery within the large surface area of this cultural institution hosts new guests: the women who went out onto the streets in March 1998 to protest against the slaughter of Albanians and the repression being exercised over them by Slobodan Milosevic’s regime.

“Data: Mars, Women’s Forgotten Activism — Kosovo, March 1998,” a contemporary take on women’s activism during this period, opened its doors yesterday (Thursday, August 30) with a simple aim: starting up a conversation.

The exhibition, supported by Forum ZFD, was initiated by researchers Linda Gusia and Korab Krasniqi from the Program for Gender Studies at the University of Prishtina, and has been brought to the gallery under the curatorial work of artists Majlinda Hoxha and Nurhan Qehaja.

Before entering the gallery, one first has to go through a militaristic path of guns used in battle and official flags, of officially declared heroes and patriots, labels seemingly reserved in this institution only for the men from Kosovo’s most recent history. Past that, the sound of paper sheets blown by the air, claims of “Lavdi!” [Glory!], sometimes angry and firm, and the sound of Associated Press reports on the women’s march to the entrance of the Drenica region welcome the visitor to a flashback of a forgotten and invisibilized past. 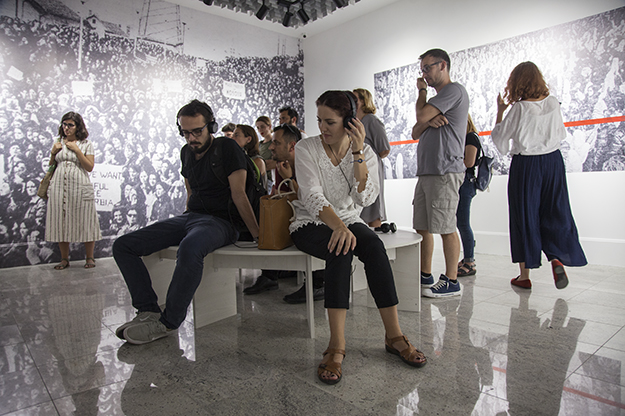 They are sounds that are especially familiar to women who organized or participated in the protests of March 1998. An especially crucial time as Kosovo’s war reached ticking point, it was at the beginning of this month that the massacre of the Jashari family in Prekaz took place, an event that many people use to date the start of the war.

In combination with this sounds, newspaper reports and a few photographs from some of the key protests organized by women in March ’98 add to the experience. Red tape stretches across the center of one of the walls, which features an image of women holding bread up in the air during the ‘Bread for Drenica’ to symbolize the humanitarian crisis in the region. The wall offers a reminder of both the police cordons stopping citizens from passing through and the ribbons that protest organizers put on their arms to self-identify and be visible to the crowds.

For the curators, explains Nurhan Qehaja, it was very important to capture and reflect the feeling of the time, and they have been extremely careful with the artistic, visual language used throughout the exhibition, she says: “There was so much going on at that time in March 1998, and we want to emphasize these protests and the role of women, without having to degrade anything else or put aside anything else that was important at the time — but to understand women’s involvement at the time, especially in those protests.”

For one of those women, women’s rights activist Igballe Rogova, the visit to this exhibition is especially emotional, as each image and sound touches the nerves of her sensory memory. 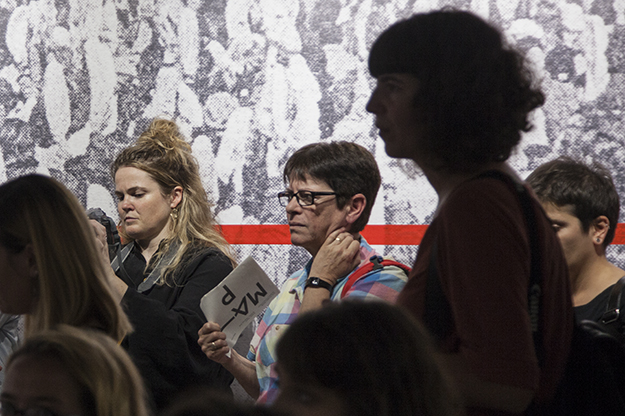 Women’s rights activist Igballe Rogova was also one of the organizers of protests in March 1998. Photo: Ardit Hoxha.

“This meant freedom — we felt free,” she says. “Freedom because we thought we could do something.”

Behind her, an image taken by then photographer Eliza Hoxha pictures a woman looking straight into the camera among a crowd of arms holding a white sheet of paper. It was taken at the first of many protests, ‘It’s 12 O’clock for Kosovo — Call For Peace,’ on March 1, 1998.

“Even at that time I remember there were snipers all around us and we didn’t feel fear. We felt we were free…,” Rugova recalls. “Organizing was amazing. We saw snipers and we’d go around within the crowd telling everyone not to go home alone. And every woman would link their arms united, and you would see 10 people in rows going [home] together.”

For Rugova, despite her long-standing involvement in activism, it feels difficult nowadays to find the space to speak about this particular time and experience. “Back then we didn’t know what fear was, while today you feel exhausted because of that time,” she says. “Also, it’s connected with today’s situation — we still have to fight every day for women’s rights.”

For Professor Linda Gusia, who has extensively researched women’s activism as part of her work and interviewed and discussed the topic with many of those featured in the exhibition over the years, this was an opportunity to start a larger societal conversation that includes younger generations.

“I wanted to open up a conversation about the past, and especially about women’s activism,” she says. “This is a good entry point to dealing with the past in a more critical, complex, active and reflective way.”

Gusia was herself part of the protests in 1998, and got to witness the consequences of war while working as a fixer and translator for the Washington Post. During this period, one of her vivid memories is accompanying journalists to the aftermath of the Prekaz massacre. She turned 20 on March 15 that year, just a day before the ‘Bread for Drenica’ march. 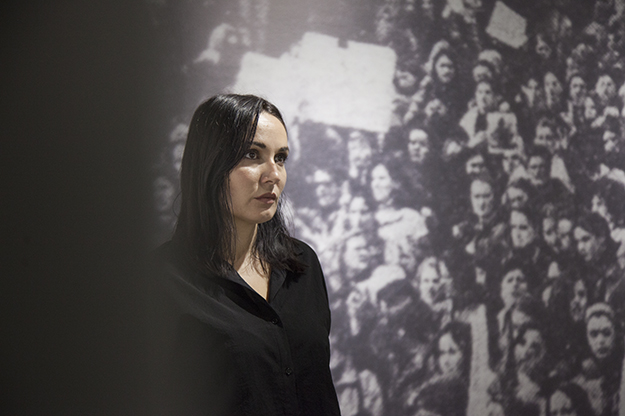 Professor Linda Gusia has researched women’s activism, and over the years has interviewed many of the voices featured in the exhibition. Photo: Majlinda Hoxha / K2.0.

Asked by K2.0 why March 1998 has been taken as the time period covered by the exhibition, Gusia explains that during these protests women were very visible in public space. “Their political subjectivity was very present, they organized a lot of the protests in March, and it was a time when the Jashari massacre took place, the war started…,” she says. “They were in the streets trying to change the course of peaceful resistance and calling for the international community’s attention.”

For Gusia, the current conversation about the past has had a strong component of glorification that has limited the capacity to reflect on this past. “In any attempt to make everybody a martyr we have killed the humanity and we have killed the story, the possibility of dealing with it,” she says. “Around glorifying martyrdom there is always this imposed silence. The idea is to talk about the nuances and the complexities of the stories, and to deal with them.”

The exhibition particularly features four key protests organized by women in March 1998: the ‘It’s 12 O’clock for Kosovo — Call for Peace’ protest, an early protest held with candles, the ‘Bread for Drenica’ march and the ‘Peaceful Divorce’ march.

Additional reports and a limited number of newspaper articles — what could be found in the archives about these protests — contribute to contextualising the overall exhibition along a timeline of events. Visitors can also listen to fragments of interviews conducted, in collaboration with Oral History Kosovo, with some of the protests’ participants and organizers, Albertina Binaku, Edita Tahiri, Eliza Hoxha, Flora Brovina, Lendita Cena and Vjosa Dobruna.

One of the regular participants was Vlora Hajdini, today a painter, and back then a 22-year-old arts student. Struggling to order her memories — many are blurry — she also recalls that sense of safety that other protesters talk about.

“In the women’s protests we felt we were safer than in those with men, perhaps because we were all women, but we knew the risk; it was already a time of war, and we felt that we were the ones who could raise a very powerful voice, and if the world would see that the [Serbian] police attacked us, or something happened, then there would be a huge reaction, especially in the ‘Bread for Drenica.’”

One of the curators, Majlinda Hoxha, said in her opening words that the exhibition focuses particularly on the protests but that there are many other forms of activism that remain hugely undocumented.

To contribute to increasing the documentation and discussion around this period, 5,000 white sheets of paper await visitors of the exhibition, with an invitation to write their own reflections and experiences of the protests, while a platform will also be set up online for people to share their personal images or stories, and the #datamarch hashtag has also been created. In the coming days, a discussion with organizers and participants of the protests will be announced in order to reflect and to bring activism back to the present.K

The exhibition will be open until September 20, at the Museum of Kosovo.