On an evening in Podujevo this April, one could have easily encountered members of the Llapi hunters’ association, as they roamed the city’s streets. The group had been ordered to patrol by a mandate from the Municipality of Podujevo, a tender that had been given to them on April 3, with the mission to find and kill all stray dogs.

Late at night on April 24, a few citizens witnessed these killings and filmed the blood stains which covered the streets. The video was shared on social media and picked up by local news. It sparked a huge reaction, with many labelling the municipality’s actions as “cruel and completely inhumane.”

The citizens, however, were just as adamant in their opposition, and social media became the main platform of communication between activists and citizens, who continued to push for a cessation to the killing. 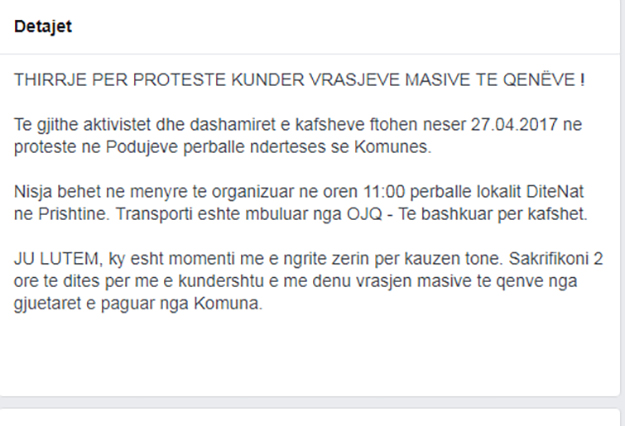 Violent images of the killing of dogs on social media was backed up by calls for protest.

During the past few years, social media led campaigns have increased. From protests against energy price hikes, to calls to dismiss University of Prishtina rector Ibrahim Gashi in 2014, to fighting against the privatization of parts Vushtrri Castle — complaints against municipal decisions have become a common feature.

Power in a group

There are many Kosovar animal rights groups on social media, with United for Animals being one of the most active on Facebook with 8,000 members. They have been particularly vocal regarding developments in Podujevo.

Their opposition to the actions of the Municipality of Podujevo is based on local legislation, specifically the Law for Protection of Animals. In Article 8 of this law it is noted: “With the exception of urgent cases in which the animal is in extreme pain which could result in death, and bred animals which are used for food production, only vets and other competent people are allowed to kill tamed animals, or any wild animal that has been tamed.”

The United for Animals group also called on other state institutions, such as the Food and Veterinary Agency and the Kosovo Police, to urgently stop the killings, which they assessed as being illegal.

Demonstrations against the Municipality’s decision were conducted very quickly. The video which showed the dogs being killed was posted on April 24. Three days later, a protest was held in Podujevo against the killing of stray dogs. United for Animals continued their advocation on Facebook throughout the whole period. On April 28, Mayor Veliu stopped the killings, with municipal officials saying that he is seeking other methods for dealing with this issue.

Driton Gusia, a member of United for Animals Facebook group, started a petition which called for the termination of stray dog killings in Kosovo, it was signed by more than 120,000 people.

United for Animals has been active in opposing other municipalities’ poor treatment of animals, even before the events in Podujevo. Municipalities such as Prishtina, Prizren, Klina and Fushe Kosove, all faced opposition from the group’s members, who accused these municipalities of organizing “massive killing operations against stray dogs.”

Driton Gusia, a member of United for Animals, started a petition which called for the termination of stray dog killings in Kosovo. The petition called on the president and prime minister to halt this inhumane practice and insisted on other methods of dealing with the issue, offering alternatives. The petition was signed by more than 120,000 people.

Gusia highlights the killing of stray dogs in the municipalities of Mitrovica and Northern Mitrovica. Members of the group took action by going to these municipalities to attempt the termination of the killings. They also attempted to meet with mayor Agim Bahtiri, albeit unsuccessfully.

He tells a sad story of a dog that was killed, who residents in Northern Mitrovica had been feeding every day. In a sign of protest, the residents painted a mural in honor of the dog.

Recently, with the support of the European Union Office, the group has started to campaign in local schools, with the objective of raising awareness for the issue of stray dogs. The Government of Kosovo has also considered suggestions given by this initiative for dealing with stray dogs and stopping their killing.

But it’s not just groups that have forced change through social media, individual profiles have also had an effect on local politics in Kosovo.

In 2014, Betim Zllanoga used a Facebook post to remind the Municipality of Rahovec, led by Idriz Vehapi, that they had breached the law by not organizing any public meetings with citizens. According to Article 68 of the Law for Self-Governance, municipalities are obliged to hold public meetings at least twice a year. 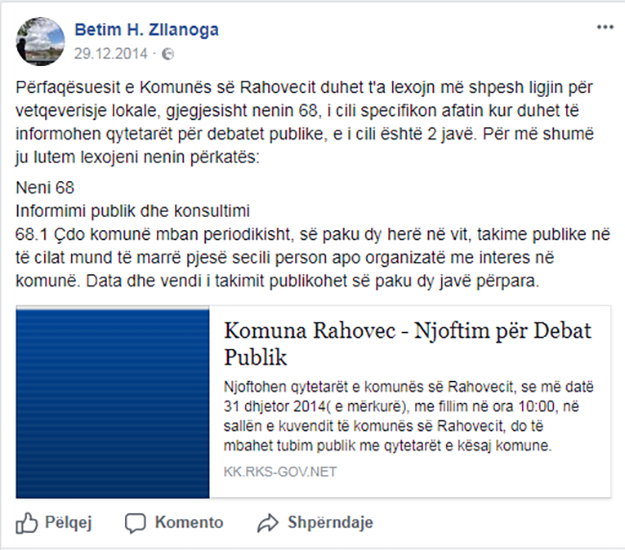 Betim Zllanoga used Facebook to remind his local municipality in Rahovec of their obligations regarding public meetings.

With a few days left before the end of the year, municipal officials rushed to organize at least one public debate with their citizens in the remaining days. However, Zllanoga was not content. He reacted again on social media, labelling their decision as a farce.

Living in a small city in which most people know each other, Zllanoga noticed that many chose to remain silent on local issues. According to him, this resulted in a situation in which there were no one was holding the municipality to account. The civil society activist used his Facebook wall as his biggest ally for issuing criticism, ideas and denouncements on the local government in Rahovec.

Like Zllanoga, Klan Kosova journalist Milot Hasimja is also known for being an active citizen on social media. He believes that local government has a direct effect on improving the lives of citizens, and as such must be in the focus of our criticism. Both Hasimja and Zllanoga agree that it is important to insist that municipalities live up to their responsibilities.

Last autumn, Hasmija made daily visits to the Lagja e Spitalit neighborhood in Prishtina, an area of which had been turned into an undesignated landfill. He went there every morning and evening, taking pictures and sharing them on his Facebook page. 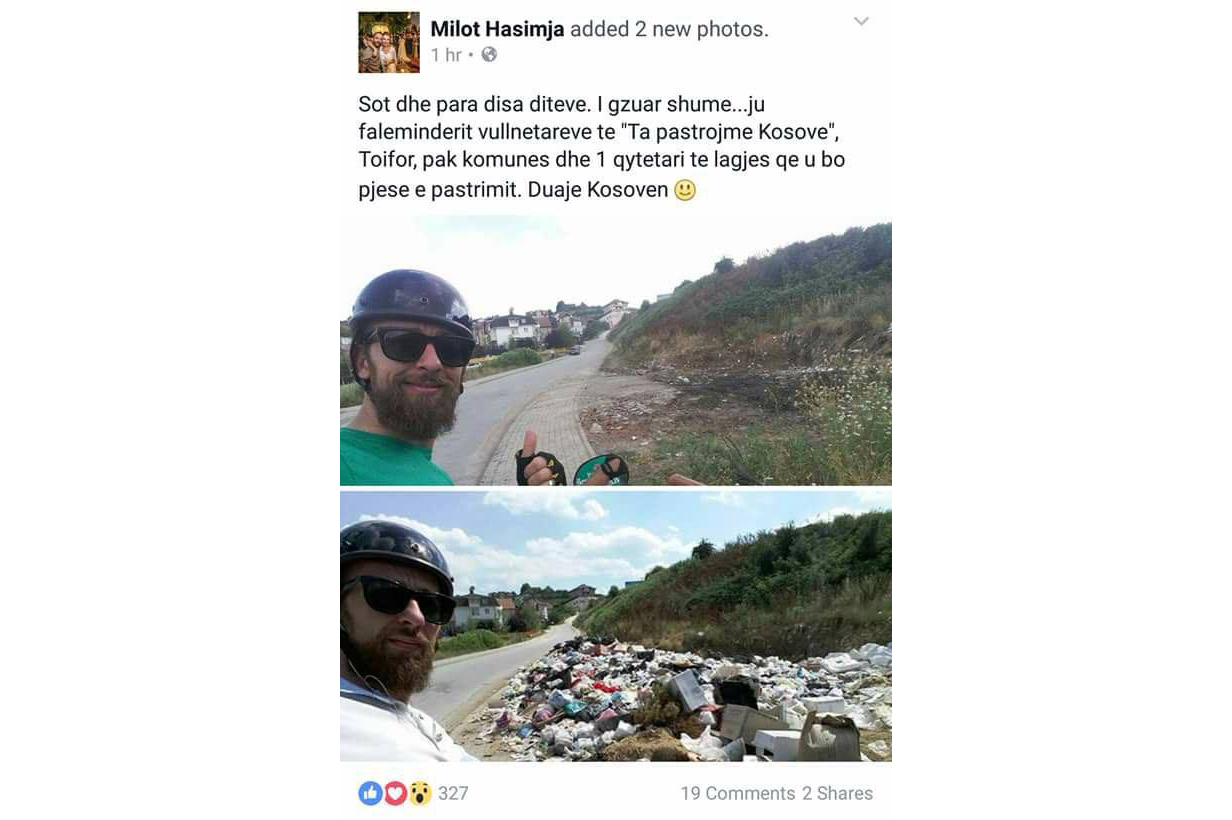 Milot Hasimja documented the entirety of his efforts to clean up an area of Prishtina via social media.

When they went out in the field to clean the area, they were joined by the Directorate for Public Services of the Municipality of Prishtina. Within days, they managed to remove all the waste and cover the area with grass and trees.

Zllanoga believes that using social media for dealing with issues in municipalities has an outstanding effect. According to him, results are best achieved when the criticism is objective, and a proper form of communication with the people in power is found.

The online activists feels that social media’s biggest asset is removing the barriers that existed between politicians and citizens, and creating an equal level of debate among them. “I believe this is a contribution to the local government and politicians should be thankful,” says Zllanoga. “It’s interesting that now people have started writing to me about their problems, wanting me to raise them as issues.” 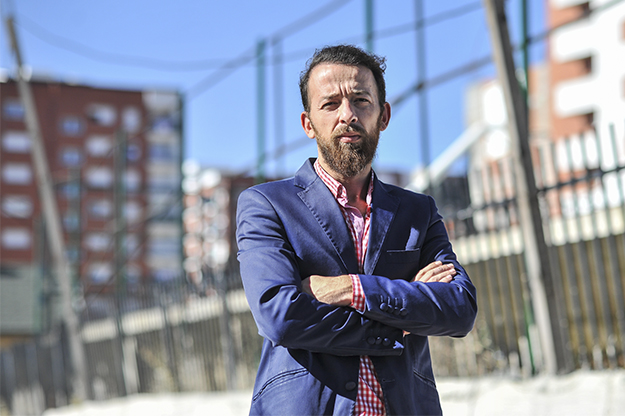 Milot Hasimja feels that his success in Lagja e Spitalit was in part down to his large social media following and public profile, and feels that an office for complaints should be opened in the municipality. Photo: Atdhe Mulla / K2.0.

Hasimja, who has made his neighborhood — the area around Muharrem Fejza street — famous through his social media activity, believes that time is still needed for online activism to become even more productive. He recalls a situation eight years ago, when he led criticism against the mayor of Prishtina at the time, Isa Mustafa. However, with social media not being used as much as today, he says that officials never listened to his complaints.

For example, he explains how at one point his brother addressed an issue to the Municipality of Prishtina and was disregarded, whereas Milot’s plea for the same issue was taken more seriously due to the fact that he is a public figure.

To facilitate communication between citizens and the municipality, Hasimja believes that two steps must be taken: to have better organization among communities in the neighborhoods, and to form an office for complaints within the municipality, which would distribute civil complaints to other departments. 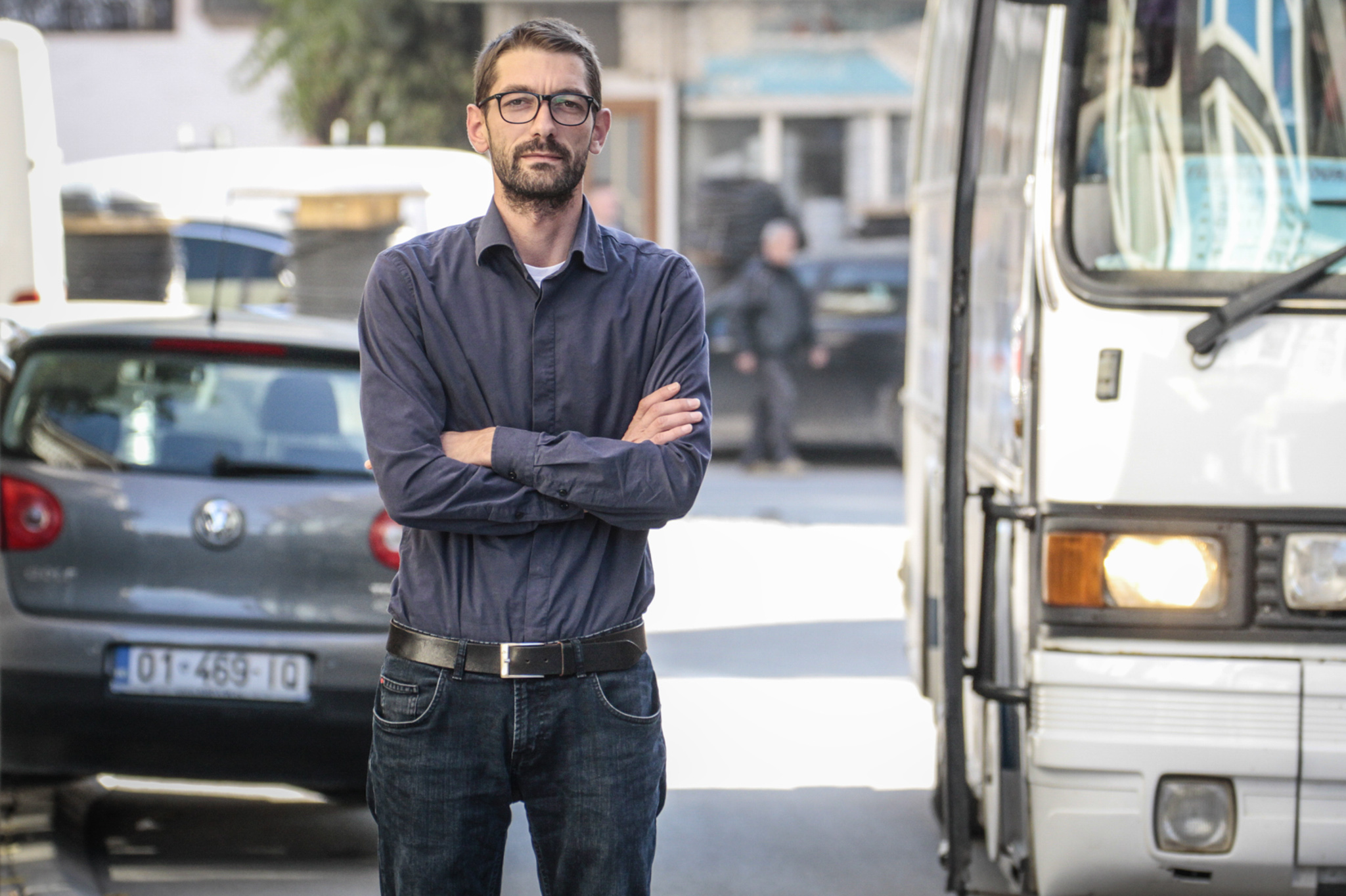 On the other hand, Zllanoga believes the usage of social media by politicians can be used as a boomerang against them. According to him, cases in which politicians promote their work in these communication platforms and are criticized within them are an example of how social media can enable citizens to confront politicians.

He believes that governments are more successful because issues are being addressed and citizens are sharing their problems with politicians.

“Do you realize how much their discourse has changed?,” Zllanoga asks. According to him, candidates for the position of municipal mayor in Rahovec have stopped talking about their involvement in the war, and now talk about concrete problems that preoccupy citizens.

“Social media has enabled citizens to play the watchdog role that was once played only by journalists. Citizens are monitoring the work of governments and are influencing public discourse,” says Zllanoga.

On the other hand, Hasimja, who has worked as a journalist for years, highlights that the space offered by social media makes it more suitable for denouncements than actual media. “Social media offers better space for speaking out against a problem,” he says.K

The Case of Vushtrri Castle

On July 7, 2017, the Kosovar Institute for the Protection of Monuments made a decision to allow a hotel to be built within the Vushtrri Castle. A week later, the Director of Culture, Youth and Sport within the Municipality of Vushtrri, Shpresa Rama, reacted on Facebook saying that “the decision was made by the institution without any prior notice to the municipality.”

Three days later, citizens started to express their articulated responses against this decision. A youth group in Vushtrri opened a Facebook page called “Qytetaret ne Mbrojtje te Kalase” (Citizens for Protecting the Castle) through which they opposed the decision. In their initial reaction they said that the decision for allowing private usage of the castle went against the protection of cultural heritage sites, highlighting the fact that the Vushtrri Castle was being used by young people for cultural, educational and social activities.

Moreover, the beneficiary of this decision was Mentor Salihu, an uncle of Bajram Mulaku, the current mayor of Vushtrri. A similar practice was conducted in 2010 when the municipality issued a permit for using a part of Ura e Gurit (Stone Bridge), another cultural heritage site, for business purposes to the brother of Sami Istrefi, the director for urbanism in the city. According to the initiative, part of the bridge is already damaged, and the issuing of the permit would continue to endanger and destroy the city’s heritage.

On July 19, the initiative submitted a request to the State Prosecution for reviewing the decision made by the Municipality in relation to the Castle, on the same day, the Kosovar Institute for the Protection of Monuments announced that it had terminated its contract with Salihu. Five days later, on July 24, the case was forwarded to the Basic Prosecution of Mitrovica for further review.

In response, members of the initiative stated: “We as an initiative are aware that, for now, we’ve won an important battle, but the war for our Castle’s past and future has not ended.”