Meet some of the novices entering Kosovo’s Assembly.

Having a broad-base of professional experiences, as well as backgrounds and ages, is often seen as the democratic ideal; the representatives of the people, should be just that, representative.

Among the representatives from all walks of life entering the biggest stage of Kosovo’s domestic political theater there is plenty of fresh blood, with more than one-quarter of representatives being sworn is as deputies for the very first time. With 16 more deputies than in the previous legislature, the largest cohort of first-time deputies inevitably comes from the party that made the biggest gains on June 11, Vetevendosje, while Ramush Haradinaj’s AAK has no first-time deputies.

But what motivates these newly elected deputies to stand for public office? What responsibility do they feel toward their party and toward the citizens that elected them? And what issues motivate them as they embark upon their political journeys in Kosovo’s highest level of legislature? K2.0 met with some of the new class of 2017 to find out.

The old with the new

In contrast to Kosovo’s youngest deputy, 26-year-old Teuta Rugova, who has already served as a deputy in her father Ibrahim Rugova’s LDK party since 2014, the oldest deputy, Adem Mikullovci, will be representing citizens of independent Kosovo for the very first time.

The well-known 76-year-old actor’s political career did not start in 2017 though, as Mikullovci was among the delegates who signed Kosovo’s declaration of independence from Serbia on July 2, 1990, a move that was fiercely condemned by Serbia at the time.

“I think one of the reasons that people voted for me is because they still remember how vocal and determined I was as a delegate in 1990, and people trust the honesty that I showed in the difficult years of the occupation,” says Mikullovci, who gained more than 12,000 votes on Vetevendosje’s list in June’s elections. 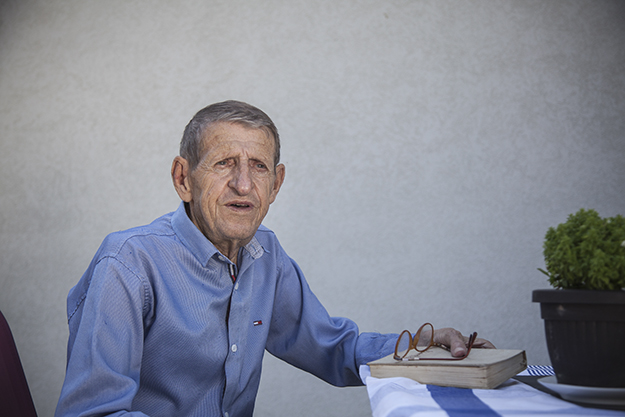 At 76, Adem Mikullovci will be the oldest deputy in the new Assembly. Photo: Majlinda Hoxha / K2.0.

Twenty-seven years later, Mikullovci wants to bring back a more “respectable” profile of a deputy that he says existed in the ’90s, of someone with dignity who works for the people and not for personal gains.

Reading his favorite author, Mark Twain, under the shade of his small house in the suburbs of Prishtina, the deputy expresses his energy and impatience to start with the sessions at Kosovo’s Assembly, where he pledges that he will be a loyal “soldier” of Vetevendosje while at the same time immediately bringing his personal ideas. “I cannot clash with Vetevendosje as I am a soldier of a movement that is the only light in this dark tunnel other parties have built in the last 18 years after the war,” Mikullovci says.

As the oldest elected Assembly deputy, the actor is entitled — alongside Rugova as the youngest — to head the constitutive session that is due to be held on Thursday (August 3). However, Mikullovci doesn’t seem elated with the privileges that deputies have and says he will propose a reduction of expenses for elected officials.

“I will stubbornly fight to cut the salaries of deputies as it doesn’t make sense for a deputy to have a salary six or seven times higher than the average salary in Kosovo,” he says, adding that deputies should be an “example” to the rest of society when it comes to saving budget. “Why should deputies get a per diem when they have an excellent salary that is almost 2,000 euros per month?” asks Mikullovci, angrily.

“If on the day that I leave the Assembly I see that we have obtained good results for the good of Kosovo, as the popular saying goes, ‘I will close my eyes happily.’”

Although almost three decades have passed since Mikullovci was a deputy for the first time, and nearly a decade since Kosovo proclaimed independence in 2008, he continues to talk of the notion of sovereignty from Serbia. “I would see it as an achievement to cut relations with Serbia in their current form and would prefer to have talks only as two sovereign neighbors,” he says. Such a stance tallies with the line of his party, which has continuously proposed halting the dialogue with Serbia in its current form until some pre-conditions — relating to war reparations and reciprocal recognition — are met.

Mikullovci says that his long standing dream of a sovereign republic and an equal social democracy would make him feel fulfilled, ideologically. “If on the day that I leave the Assembly I see that we have obtained good results for the good of Kosovo, as the popular saying goes, ‘I will close my eyes happily,” he says.

While Mikullovci’s political career is likely approaching its end, his fellow new Vetevendosje deputy, 35-year-old Fitore Pacolli, has more recently embarked upon what she hopes will be a long journey in politics. “I see politics as a tool to a make a difference for us all as individuals and professionals in our country,” Pacolli says. 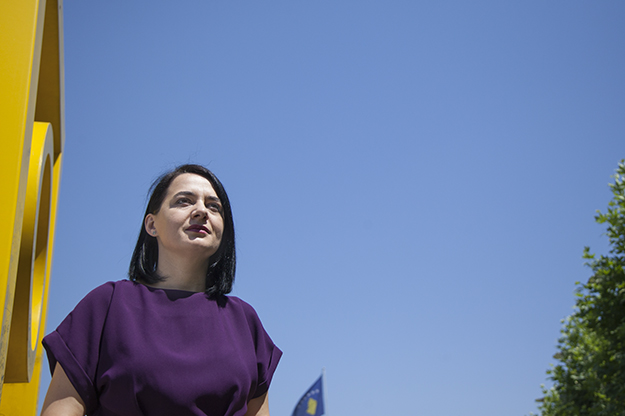 Fitore Pacolli hopes to bring her experience as a teacher to her new role as a deputy, where she promises to uphold social democratic values. Photo: Majlinda Hoxha / K2.0.

She believes that her role as a cabinet chief at the Municipality of Prishtina under Shpend Ahmeti’s administration, and what she describes as a “social democratic” model of governance in the capital, positively affected her candidacy in the general election. “I have built a profile of myself even during my studies as social democracy oriented, always wanting to promote the values of social equality,” she adds proudly, emphasizing that time spent living in London strongly influenced her desire to return and establish adequate public services in Kosovo.

“The hand of the state to help poor families has been missing,” she says. “To take the state to another level we should move many families from extreme poverty to a more easy and dignified life that would ensure more equality.”

Pacolli is especially interested in contributing to the improvement of the education system, foreign affairs and European integration of the country, where she feels qualified due to her education in London in international relations and her experience as a teacher in various public and private schools in Kosovo. As a keen cyclist, and having witnessed Prishtina’s alarming air-pollution measurements in the past year, she also says that she plans to push forward environmental policies. “We have seen [air pollution] results that are even worse than we expected,” she says.

Another new deputy who has been involved in the education sector is Valentina Bunjaku-Rexhepi. The 39-year-old former maths teacher is not surprised at her election, as she points to what she describes as a successful record as speaker of Gjilan’s Municipal Assembly. Bunjaku-Rexhepi is also unsurprised that so many LDK voters chose her as one of their picks, as she proudly admits that her roots have always been in LDK and says that her father was one of the party’s founders back in 1989.

As with Pacolli, Bunjaku-Rexhepi hopes to stay in politics for a long time, describing her new role as a “privilege and trust.” 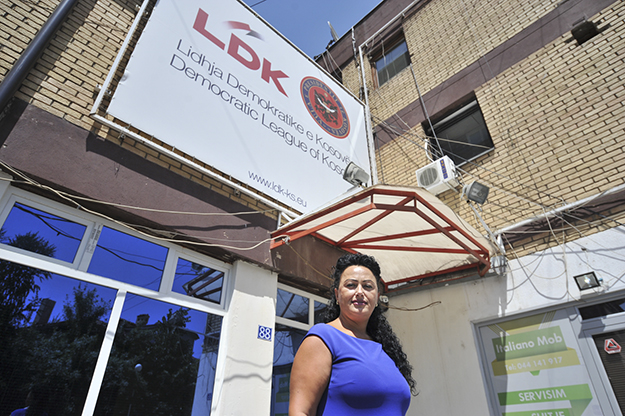 Valentina Bunjaku-Rexhepi says that she is LDK to the core and cannot envisage thinking differently to her icon Ibrahim Rugova. Photo: Atdhe Mulla / K2.0.

Having gained more than half of her 8,600 votes in the June 11 election in her hometown — in the process becoming the LDK-AKR-Alternativa (LAA) coalition’s most popular candidate in the city — it is unsurprising that she prioritizes Gjilan when she talks of her aims as a deputy. “I have mentioned my personal priorities and I want two or three big factories in Gjilan, to reduce unemployment,” she says.

Bunjaku-Rexhepi believes that she is capable of working effectively on many different topics as a lawmaker and that she isn’t constrained by her past experience. “Although I am a teacher of maths I can contribute in any of the fields as in politics you should have desire and commitment,” she says.

In her new role as a deputy, she believes that the vote of the people obliges her to consult LDK’s branch in Gjilan, and with the top of LDK’s hierarchy, each time there are key decisions to be made.

“I hope that the number of politicians who see politics as their career decreases.”

Bunjaku-Rexhepi highlights that she feels so rooted in LDK, that even if LDK hypothetically didn’t support her, she would still remain an LDK supporter. “My idol was Rugova as he is an historic president,” she says. “If I think differently to him, I tremble with the fear that I could betray President Rugova … He is alive and for us he did not pass away.”

In contrast to Bunjaku-Rexhepi who sees herself as part of LDK for life, another new deputy, 39-year-old Korab Sejdiu, left the party after a short spell advising former president of Kosovo, Fatmir Sejdiu, in 2008. He says he decided to abandon LDK due to a lack of “space” for young people, as he thinks his profile “threatened” the LDK old-guard.

Now representing AKR in the new Assembly, the law attorney, who has previously lived and studied in the U.S. before deciding to return to Kosovo in 2007, is critical of those who view politics simply as a career path: “I never saw politics as a profession but rather as a contribution to the country, and professionals are what politics in Kosovo needs,” he says. “I hope that the number of politicians who see politics as their career decreases.”

In light of this approach, he sees his own long-term future as being outside of politics. “I hope not to be in politics in 20 years but to be spending time with my future nieces and nephews in a better environment than that of today’s Kosovo,” he says. 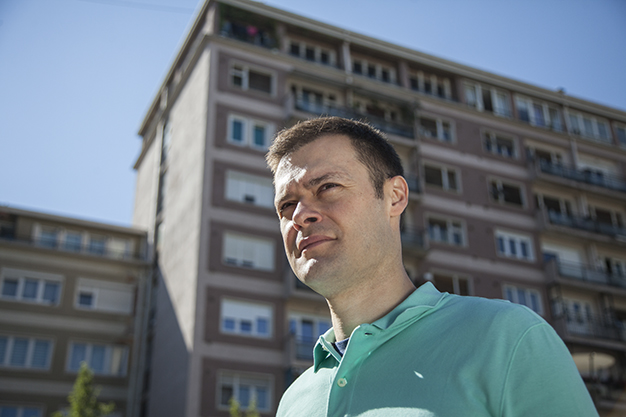 Korab Sejdiu, who is a trained law attorney, believes that his experience will be valuable when it comes to issues of justice. Photo: Majlinda Hoxha / K2.0.

Given his professional background as a lawyer, Sejdiu believes his primary contribution as a deputy will be in the justice sector, as well as in youth empowerment and economic development. He insists that the expectation of being able to contribute effectively and knowledgeably in all spheres is not a realistic one. “It is impossible to be an expert in all fields,” he says. “I would willingly contribute to the justice system, and would leave doctors to cope with health care and surveyors with surveying.”

Having secured more than 8,500 votes in Junes election to become one of four deputies that will represent AKR in the new legislature, Sejdiu says that being an elected representative should not be taken lightly. “Not [because I received] 8,500 votes, but even two votes is a high responsibility,” he says.

Despite media rumors that Sejdiu’s party might derail from LAA and support a government led by the PDK-AAK-Nisma coalition, he categorically rejects such an idea, saying that he has more loyalty to those who voted for him.

“One of the promises I gave in the electoral campaign was that I would not cooperate with people who must be held accountable for where Kosovo stands,” he says. “First of all, I cannot betray myself and my family because on a daily basis I would have to meet them. How could I face them if I were to betray the principles on which I sought their vote?”

K2.0 also contacted first-time PDK Assembly deputies Andin Hoti, Mergim Lushtaku and Evgjeni Thaci-Dragusha for this article, as well as LDK’s Fidan Rekaliu. Hoti declined to be interviewed before the Assembly is constituted; Lushtaku agreed to answer questions via email but subsequently failed to reply; Thaci-Dragusha did not answer messages and could not be reached by phone; Rekaliu agreed to be interviewed but subsequently failed to respond to calls and messages.