Flooding has forced thousands to leave their homes in Albania - Kosovo 2.0
Lately | Albania

Flooding has forced thousands to leave their homes in Albania

Human activity a factor in the natural disaster.

At the beginning of December, a considerable part of Albania found itself under water. Some main roads were completely blocked, dozens of bridges were destroyed and hundreds of families were forced to leave their homes.

Heavy rainfall started on Nov. 30, continuing with the same intensity until Dec. 3. Police and soldiers were called in, who in some cases had to struggle to remove people from their homes. At the coast, rough seas caused ferry services to neighboring Italy and Greece to be suspended. “Mother Teresa” International Airport also suspended flights for a day due to heavy rain and standing water on the runways.

The Vjosa river in the south of Albania was seen as the biggest risk, as its waters had been rising to unprecedented levels. Schools were closed for a day in the whole country.

Sander Lleshi, Security Advisor to Prime Minister Edi Rama said that the situation was very bad. “The state’s initial assessment is that the floods were very severe. There were 590 evacuated families, 1,552 saved people, 4,715 damaged houses and 10,622 hectares of flooded land,” he told a press conference. 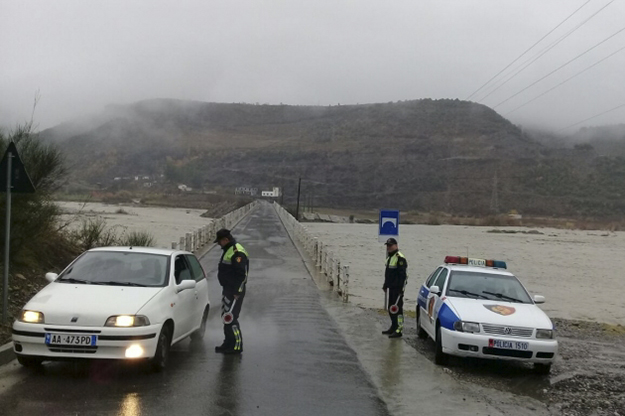 Over 60 bridges were flooded during the last big rainfall in Albania, which lasted from Nov. 30 to Dec. 3. Photo: Albanian Ministry of Interior.

Lleshi also announced the damage evaluations, saying that there are 65 damaged bridges in the country, “which is unprecedented.”

Dajana Dobrozi, a young girl from Fushe-Kruja, one of the most flooded towns in Albania, remembers the day of floods very vividly.

“It was midnight and we were sleeping. Water entered the whole house. All the furniture my parents had worked hard to buy, were destroyed,” Dobrozi told K2.0. “My hens died too. My books were all under the water. It was horrific.”

Dobrozi also tells K2.0 that the Ishem river also flooded the agricultural areas in her village, Bilaj. “It looked like nature was taking revenge against the people who had treated the poor river very badly. We all believe that sanitation collectors were the real cause,” she told K2.0 adding that the river was polluted and full of rubbish.

She says that the weather forecast mentioned possibility of floods, but people did not consider this announcement carefully.

Prime Minister Edi Rama said that once the emergency situation was over, his government would prioritize a legal initiative to insure houses and businesses against flooding. He also promised that the government will provide compensation for the damage, adding that more must be done to prevent situations like this in the future.

“We have to make some interventions in order to protect the riverbeds and to start planting trees where there has been serious erosion,” he concluded.

Albania has a long history of floods, with the worst happening in late 2009 and early 2010. Back then, as a result of increasing rainfall, the Drin river raised the water level.

The most affected areas were parts of North-Western Albania, especially Shkoder, located close to three hydroelectric power lakes in Fierze, Koman and Vau i Dejes. Authorities were forced to release water from the artificial lakes in Shkoder and Lezhe which are positioned in plain areas.

The Albanian government declared a “natural disaster” on Jan. 5, 2010, when flooding displaced thousands of people. The army and police forces were called in to help remove residents using boats and military vehicles. They also declared a “state of civil emergency” and founded an Inter-ministerial Committee.

Paulin Macaj is an activist from Shkoder who suffered from the great floods of 2009-2010. He represents the “Flooded Citizens Association” that is still fighting for compensation.

“In 2010, there were 4,630 families affected by floods in Shkoder. Damages were evaluated during Berisha’s government but the money is still to be paid,” Macaj notes. “Possibly millions are due to be paid to citizens whose houses were flooded. My house was flooded, too. So far, some money was distributed, but they haven’t been fair. We organized protests many times, and I’m still raising my voice but there is no result.” 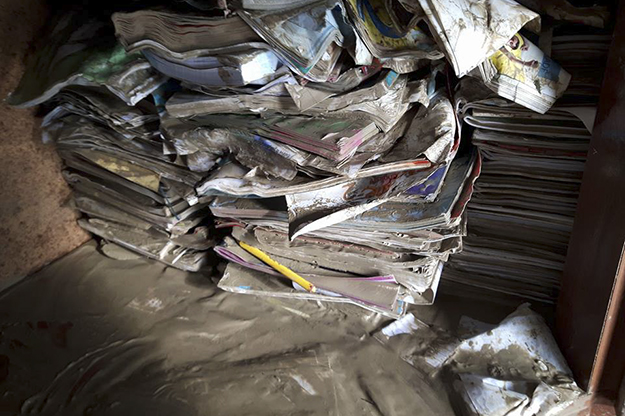 In Feb. 2015 there was another flood where around 3,000 hectares and 600 houses, mostly in the western part of the country, were underwater. This time, 42,000 people were affected. It was estimated that millions of lek in damage was caused to businesses, agriculture and houses.

Why Albania and why so often?

According to a 2015 World Risk Report, compiled by the United Nations University for Environment and Human Security (UNU-EHS), Albania, Netherlands, Greece and Turkey were among the countries in Europe where a natural disaster is most likely to strike.

The report showed a risk percentage to 173 countries in the world based on the chances of experiencing phenomena like earthquakes, storms, floods, droughts and sea level rises. Albania’s rating was 10.01, the Netherlands 8.76, while Greece and Turkey had lower rates (7.36 and 5.52).

Deforestation in the region was considered a primary cause for the increased amount of water in the lowlands in the 2009-2010 floods in Shkoder and Lezhe.

Speaking to a national TV station, Defence Minister Olta Xhacka explained that one of the worst situations in the recent floods was surrounding the Tirana-Durres highway, blaming illegal construction for preventing water collection systems from functioning.

Lavdosh Ferruni, a well-known environmental expert in Albania, told K2.0 that there have been a considerable number of houses built along the rivers causing damage to the natural flows. “The biggest problem is actually erosion caused by deforestation. We definitely need a wide campaign in order to plant new trees along the rivers in Albania,” he said.

“There are plenty of human factors which caused the recent floods, like buildings on sanitation collectors, changes to riverbeds, and not considering the history of floods. Also, buildings are being built all over the country without urban planning.”

Sokol Marku, a specialist in Geology told K2.0 that there are natural and human factors which impacted the recent floods.

“There are plenty of human factors which caused the recent floods, like buildings on sanitation collectors, changes to riverbeds, and not considering the history of floods. Also, buildings are being built all over the country without urban planning,” he said, adding that the last floods were a rare natural phenomenon as it rained nonstop for 24 hours.

Even though Albania is the most exposed country to natural disasters in Europe, floods are not only an Albanian story. Between 13 and 18 May 2014 a cyclone affected a large area of Southeastern Europe causing large floods. Serbia and Bosnia and Herzegovina suffered the greatest damage, and the rain was considered the heaviest in 120 years.

Back then, at least 62 people died on May 20, while hundreds of thousands were forced to leave their homes.

Floods caused over 2,000 landslides across the Balkans, causing damage across many towns and villages, mostly in Serbia and Bosnia. Several rivers rose and flooded surrounding areas. Around 1.6 million citizens were affected in Serbia and Bosnia after a week of emergency.

Year after year, the Balkans is hit by different natural disasters, raising questions about why. In the case of Albania, one of the questions that needs to be answered is why the country has a bigger risk than neighboring Macedonia, Montenegro, Kosovo or Greece?

Finally, the most important question is what are we doing wrong with nature? Not responding to this question will only leave us thinking about when the next time nature will take revenge.K