How are Kosovo’s governing parties shaping up for new year?

After a remarkable year in which two sets of elections shook the landscape of Kosovo politics, 2018 looks set to be another tumultuous year, with the operations of the Specialist Chambers in The Hague and internal conflict inside political parties looking set to add to Kosovo’s mounting political challenges.

With Kosovo’s central political institutions resuming work on Monday (Jan.15), K2.0 examined the country’s political parties to assess where each of them stand going into this crucial year, beginning with those that make up the coalition government.

The loss and maintenance of power: The Democratic Party of Kosovo (PDK)

Kosovo’s most prominent political party of the post-independence age enters the new year battered and bruised after a series of difficult election results, and facing the issue of the Specialist Chambers, one that could divide the party from its traditional allies in the international community, and even cause internal conflict.

2017 was a testing year for PDK. New party president Kadri Veseli led the party into elections for the first time in June, after PDK backed a motion in the Assembly to dissolve their own coalition government with LDK. Veseli justified their decision due to an inability to take “big decisions” and the need for a “new beginning,” which became PDK’s slogan in the parliamentary elections. 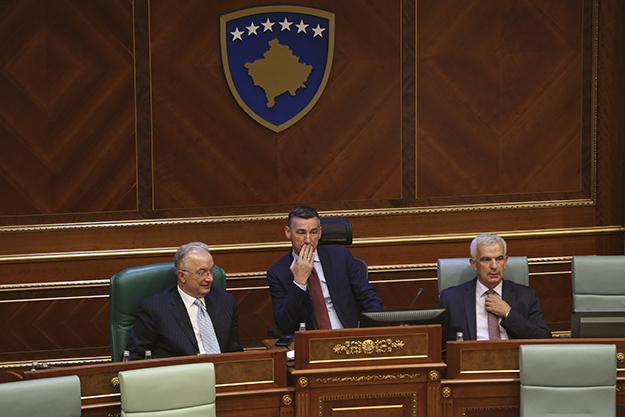 Kadri Veseli has maintained his position as Chairman of the Assembly, but chairs an Assembly with 16 fewer PDK deputies than this time last year. Photo Atdhe Mulla / K2.0.

But the party’s decision to form a pre-election coalition with AAK and NISMA was a reflection of their loss of power. PDK compromised on the nominee for prime minister with a generous offer to AAK’s leader Ramush Haradinaj. After the elections, PDK as a single party went from 36 seats in the Assembly to 20. While a poor result, the coalition still managed to become the most voted for political entity, enabling them to form the government, saving PDK from a fiasco which could have incited internal discontent.

Local elections in October measured PDK’s real power when running alone and not in grand coalitions, as its power almost vanished at a municipal level. Once governing some of biggest municipalities in the country such as Prizren, Gjilan, Mitrovica, and Vushtrri, PDK only held on to power in Drenas, Kacanik and Shtime, while winning back Ferizaj from LDK.

These poor results should be a signal to the new party leadership in PDK that it needs to have deep rooted internal reforms this year, as cosmetic changes proved not to pay off in 2017. The electorate rejected famous new faces recruited from civil service and civil society standing as PDK candidates in mayoral elections in Prizren (Shaqir Totaj) and Mitrovica (Valdete Idrizi), despite their respected professional backgrounds.

Fading election fortunes are not the only concern for the party. As with many parties across the political spectrum, PDK’s year may be defined by the operations of the Specialist Chambers in The Hague. In December, an extraordinary session of the Assembly to suspend legislation that legitimized the court was called for by 43 members of the Kosovo Assembly, including all 20 PDK members, but the session did not come to pass. This despite the fact that PDK votes in the Assembly were instrumental in the creation of the court in 2015.

Discourse over the Specialist Chambers represents the first ruption between PDK and the international community, with the US embassy and the quint group both condemning the action. Veseli was quick to attempt to mend relations, proclaiming that it is inevitable that the court will begin proceedings. Some of the party’s key figures have frequently been mentioned as being amongst those who may be indicted by the court, as well as one of the founders of the party and current president of Kosovo, Hashim Thaci.

Pragmatism and gains: The Alliance for the Future of Kosovo (AAK)

2017 marked AAK’s most remarkable year since it was established as a party in 2001 by its founder Ramush Haradinaj, who started the year being detained in France and ended it as prime minister. However, there are concerns that he may end this year out of office due to the weak nature of his government, and with key figures in his party potentially standing trial at the Specialist Chambers.

AAK moved from opposition to government at a central level in 2017, tabling a motion to dissolve the government alongside NISMA and Vetevendosje in May, before joining a pre-election coalition alongside former governing party PDK. The coalition won more votes than any other political entity, which enabled them to form a government, although one fragile in numbers. 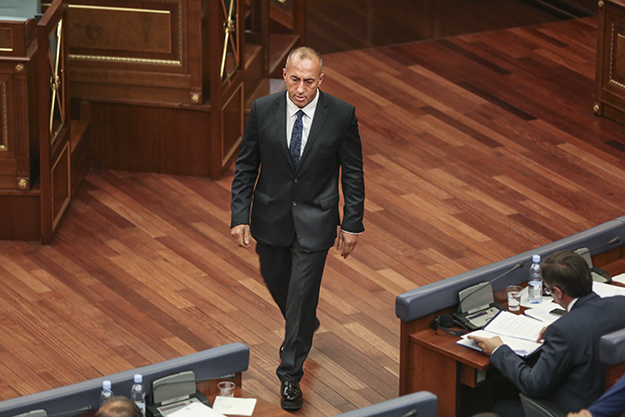 The dreams of many AAK supporters were finally realised when Ramush Haradinaj became prime minister last year, but can he maintain power with a weak government behind him? Photo: Atdhe Mulla / K2.0.

The move to join with PDK was described by many as hypocritical, as Haradinaj has frequently accused the party of the “capture of institutions.” But despite the criticism, pragmatic politics seemingly paid off for AAK, whose candidates in October’s mayoral elections frequently promised that they are backed by central government, leading to successes.

AAK won mayorships in seven municipalities, including reclaiming power in Gjakova. The spread of AAK transcended beyond the party’s traditional heartland of the Dukagjini region, also winning mayorships in more central municipalities like Suhareka and Rahovec.

While the position of their leader benefited AAK in October, his performance as prime minister will likely determine the party’s fortunes in 2018. Haradinaj’s tenure has seen frequent criticism, while his government’s weak position within the Kosovo Assembly will make it challenging to address some of Kosovo’s key political issues. With AAK staffing only two ministries, its role in the government will mostly be judged by its leader.

On Jan. 6, Haradinaj announced internal elections within AAK for all party structures. The party has always been noted for stability within, as Haradinaj has never been challenged by dissident voices or factions within the party, and has always taken the central role. More internal democracy and a distribution of power in AAK could not only help the internal democracy within the party, but also change the perception of the public who see Haradinaj as the only decision maker.

AAK’s future may also be influenced by the operations of the Specialist Chambers. The party have opposed the court since its creation, and all of its Assembly members supported the session to suspend the legislation legitimizing its work. Discussions on potential names of those who may be indicted often includes some AAK deputies, including Ramush Haradinaj’s brother, Daut.

Pragmatism and power: The Initiative for Kosovo (NISMA)

NISMA begin a year as part of the government for the first time in the party’s short history. Few could have predicted the impact NISMA had on Kosovar politics in 2017. Starting the year as the smallest party in the Kosovo Assembly and a junior partner in an opposition coalition, NISMA tabled a successful motion to dissolve the government in May, and ended the year part of the government, and staffing three ministries.

NISMA’s remarkable year also saw the party forming a partnership with PDK, the party which NISMA’s founders, Fatmir Limaj and Jakup Krasniqi, left at the end of 2013. A return to a more cooperative relationship seemingly began in April, when Krasniqi was pictured meeting PDK deputy Adem Grabovci.

A month later, NISMA tabled the PDK-backed motion to dissolve the government. In the resulting snap election, NISMA joined PDK and AAK in a pre-election coalition, that went on to be the most voted for entity, and form the basis of the new government. 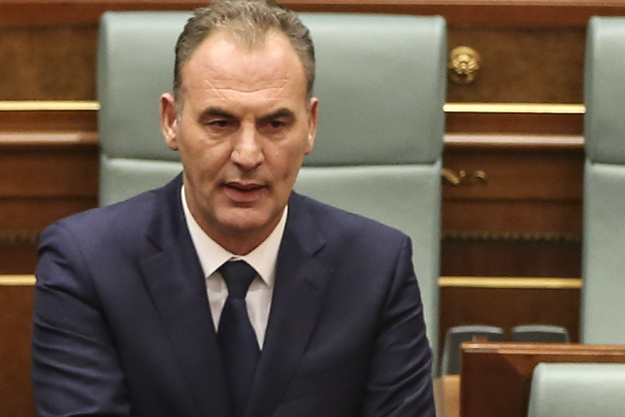 Unlike AAK, NISMA’s central power didn’t translate to local success, the party only regained the mayorship in Malisheva, where co-founder and president of the party Fatmir Limaj is from. The party will hope to keep the current government in power for as long as possible, in order to demonstrate their governing capabilities and grow further.

As with PDK, the party’s roots in the Kosovo Liberation Army, mean that the operations of the Specialist Chambers may also have an impact on the party in 2018. All of the party’s deputies supported the calls for an extraordinary session to suspend legislation functionalizing the court. It is speculated that some of NISMA’s high profile members may be tried in the Specialist Chambers, with former PDK mayor of Lipjan, Shukri Buja, being mentioned as one of those to potentially be tried in The Hague.

Pragmatism and pragmatism: The New Alliance for Kosovo (AKR)

AKR begin 2018 in a position the party could not possibly have envisioned at the beginning of last year. Although 2017 was noted for Haradinaj’s pragmatic moves, AKR, led by Behxhet Pacolli, completed a number of zigzags to take the championship of pragmatism.

After failing to win the necessary 5 percent required for representation in the Kosovo Assembly in 2014’s elections, the party joined LDK in a pre-election coalition before June’s general elections. It was a wise strategic decision. Alongside LDK and newly formed Alternativa, AKR managed to secure not only more than 5 percent, but four deputies. 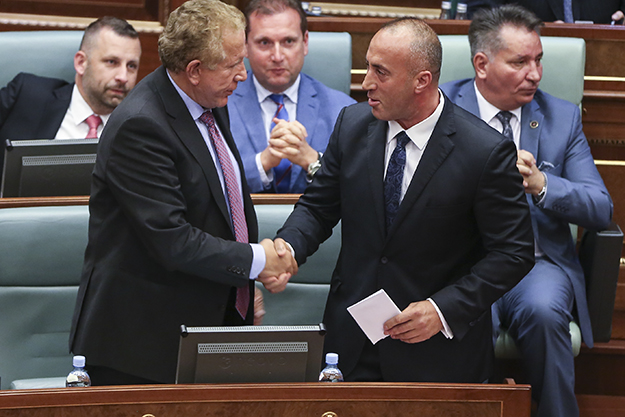 Last year, Behghet Pacolli’s political negotiating took his party from the fringes of Kosovar politics to holding key positions in the government, including Pacolli himself being Minister of Foreign Affairs. Photo: Atdhe Mulla / K2.0.

AKR’s maneuvers did not stop in the aftermath of the elections, the party abandoning their coalition with LDK to join Haradinaj’s winning “PAN” coalition, to help form the government. The deal resulted in Pacolli taking the position of Minister of Foreign Affairs, and the party leading four other ministries, an extraordinary deal for a party with such little representation.

However, as with NISMA, AKR could not turn their new position in central government into power at local level, with Agim Bahtiri — in Mitrovica — it’s only mayoral candidate to claim victory.

As part of the Kosovo government, 2018 can serve as an opportunity for AKR to bolster its position and strengthen its base. However, with the government being viewed as weak, and snap elections a possibility, AKR may struggle to hold on to its current power this year.

However, if 2017 proved anything, it was AKR’s ability to form coalitions and strike deals in order to gain power. They may prove to be the kingmakers once again.