Hamed Abboud: The whole function of literature has changed for me now - Kosovo 2.0
One-on-one | Culture

Hamed Abboud: The whole function of literature has changed for me now

Syrian poet on how his experiences as a refugee have transformed his work.

In 2012, Hamed Abboud had his first collection of poetry published, “The Rain of the First Cloud.” It was the culmination to-date of a career in writing that had begun in his teenage years, and seen him appear at reading events in Syria and Egypt, and his work published regularly in magazines across the Middle East.

However, like many of his fellow Syrians, Abboud was set to undertake a long journey that would disrupt every element of his life, including his career. Following the violent reaction of the government to the peaceful protests of the people, he left home at the end of 2012, travelling as a refugee through Egypt, Dubai and Turkey before eventually arriving in Austria in 2014. It was an experience that has transformed his writing, which has continued in his new home, alongside social work with the “Together in Oberschutzen” association.

Abboud spent the last few days in Prishtina, where he was a guest speaker at the POLIP International Literature Festival. During the panel discussion on ‘Literature in times of exile, diaspora, displacement’ on Sunday (May 14) evening, he explained how his experiences have impacted his approach to writing, from being more focused on issues he retrospectively views as being “self-absorbed,” to writing with a more social purpose.

In the past few years, he has spoken at many literary events around Europe, but noted how the similar experience of many Kosovars having been refugees themselves made being in Prishtina feel different to other places he has been to; more like a collective “sharing” of experiences and less like him having to “explain.” 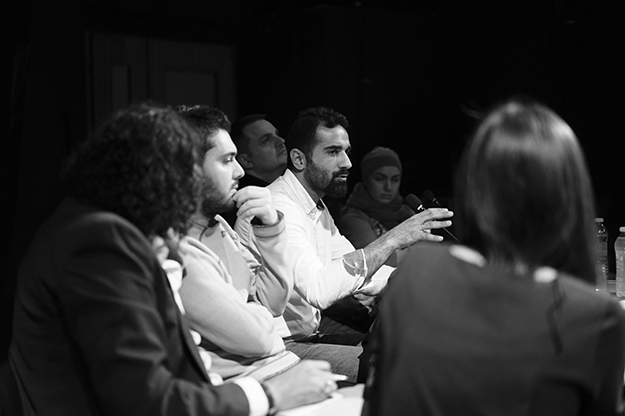 Talking of his experience of first arriving in Western Europe as a refugee, he noted that at first being unable to speak German was an isolating barrier. Unable to find conversation with the local population of the village he was in, he instead shared his thoughts and ideas with the local dogs. “Those were the most intellectual dogs in the whole of Europe,” he joked, with the same sarcasm that he reveals through his work.

K2.0 caught up with Abboud and asked him about his life in Syria, what he hopes to achieve through his writing and his experience of being a Syrian refugee in Europe.

K2.0: Hamed, first I want to ask you about your early life, your family, what they did, how many brothers and sisters you have, etc. It is sometimes seemingly forgotten that people are not born as refugees, that until recently they had normal lives; schools, jobs, their favorite poets and TV shows.

Hamed Abboud: Thanks for the question. That is true, all the time I have to mention my background to my friends here in the German speaking countries; that my father and mother are educated people, and that I come from a comfortable working family.

My father is a math teacher. In the late ’90s he opened a big bakery, which was bombed during the war. My mother is an English teacher. I have two brothers and one sister. My big brother is an architect, and the other is a law student. I am the youngest brother, a telecommunication and engineering student. My sister is a pharmacy student.

I think after this massive wave of refugees in Europe, every refugee is trying to point out where he came from and what he used to do. Sadly, it is sometimes a shock to the European community, who imagine us as mostly poor and uneducated people. But with time I see that it is working and some people are realizing how life was in Syria before the war.

I think poetry was not enough to express what we were going through.

I see that poetry was not your primary focus early on in life. Nonetheless, who would you say has influenced your writing and poetry. Who has inspired you the most? When did you start writing, and what were the topics you explored before the war, or has your poetry reached maturity only after the war?

I started writing in early 2004 and my first poetry collection was published in 2012. So I took my time to discover my language; to try and experience the Arabic language and its depth and beauty. I was writing poetry from the desire to create a text which a reader can come back to more than once, and discover other aspects in it every time.

I did not come from a literary family so writing was always something I had to develop on my own. Similarly, I did not grow up in a house where everyone is reading novels and poetry, so I had to explore that on my own too.

Is your poetry influenced by your experiences? What do you write about? I have read that your poetry often has a sarcastic narrative style, and deals with persecution and escape. Has poetry come as a natural response to your artistic personality, or as an artistic protest to depict your suffering and the suffering of your nation?

I can divide my writing into two periods, before the war and after the war. Before the war I wrote poetry about love, life and philosophy. After the war, I started with the narrative and at that point my view of the world was changing, so I would suddenly use a sarcastic narrative.

I think poetry was not enough to express what we were going through. Writing in general was a natural thing to do for me, it was already in every detail of my life before the war. But changing to sarcastic writing came after the war. That was a response; to help protest and cope with reality. I have always said in the last few years that I just wanted to make my friends around me laugh about their situation, and give them a reason to let off steam a little bit.

Through storytelling I aim to give a face and a name and a personality to the catastrophe that is happening.

Do you believe that you can change perceptions with your poetry? If yes, what exactly do you hope to change?

That is a very essential question. The whole function of literature has changed for me now. It is now a way to break borders between two different cultures. I’ve abandoned the process of writing from the personal, and ended up writing for the collective interest. It is a hard transformation but whenever I succeed in writing a text where I include myself and include others in it too, I feel that I am getting to change some small part of others’ perceptions.

Kosovo and Syria share some similarities, with both having suffered through war and persecution. How do you feel now that you have been invited to come and read your poetry here?

I am really glad that I am going to read in Prishtina. I think it is not going to be like a typical reading because, as you said, the similarities may help the audience understand what kind of pain, sarcasm, hope and poetic meanings arise in the texts. I think this experience will be different, because of the commonalities between Syrians and the people of Kosovo. 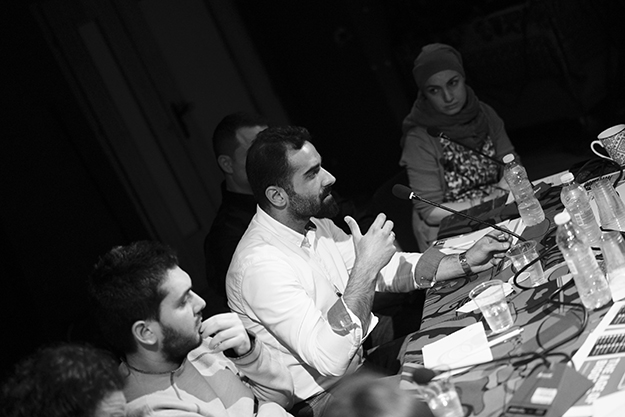 Other than poetry, you are also an activist. You have helped Syrians learn German, amongst other social work. Can you tell us about your other work, and why you have chosen to be so active in this regard?

It is a responsibility. Like the responsibility that literature should express the voices of its people, the writers themselves should also be an active part of it. I do it because I can and others can’t. I learned German, and I mediate between Austrians and refugees to create this understanding between us. I am a chairman in a small social organization and a member of another one in another town.

I think it is the same discovery I found through my journey; fleeing to Austria. I have the skills to make small changes here and there and this is the least I can do. I know how hard the process of integrating into a new society can be, so I am trying to be a helpful part of that process.

Do you think that language, sharing poetry and stories, can really change how people see each other? If someone reads your poetry, do you think he will become more sympathetic towards the plight of Syrians?

I am sure that people are sympathetic after seeing the news but I am not aiming for sympathy.  I am aiming to communicate my culture; to point out the similarities and the differences. Through storytelling I aim to give a face and a name and a personality to the catastrophe that is happening. Pity and sympathy are not enough. Understanding is more important, and it will be the grounds for living together, and not being isolated from others.

There is lots of fear, prejudice and outright hatred towards refugees all over Europe and the world. What is your message?

Everyone fears the unknown, and in the refugee crises the fear of foreigners is very big. My message would be to break that fear, and get a step closer to refugees. Try to be familiar with these people. I know from my experiences that people would be surprised.K