Helping to ensure food for all - Kosovo 2.0
Blogbox | Human Rights

Helping to ensure food for all

I was introduced to Termokiss earlier this year by a friend who told me this social center was a place to be active, volunteer for different causes, create art, share ideas, and participate with a group of young people who are open, welcoming, and motivated for change. Before, I had never heard of it or anything else similar, so it was exciting to think what it could turn out like.

On my first visit I was taken on a tour of the premises. Cheerfully, they introduced me to their core activities and the space they use that seemed to have a life of their own — a unique Termokiss ecosystem.

The garden, small but impressive, built with the help of the woodwork workshop; then the second floor platform, which is still being developed and has come a long way in since the beginning of July when I joined, with its workspace and the many books those particularly grabbed my attention; the inside, which constantly changes and evolves and may look disordered to some; and the attention-grabbing art on the walls, the table tennis table, even the many stray dogs, who have made Termokiss their home.

The lockdown period may well have had an impact in raising interest in nature, with more people wanting to get in touch with themselves and nature through nurturing plants.

Immediately, my tour guide — perhaps more excited than me — was receptive to some of my ideas I had for new clubs and activities. But before doing my own thing and bringing changes, I felt a responsibility to first contribute and volunteer; leaving my mark on the center before starting projects that would take time and attention from others.

First was the garden, something I had never done before, with its seemingly limitless potential and the infectious eagerness of the volunteers.

The “Termogarden,” as we call it, is a small space next to the building where we grow mostly vegetables and some spices. Tomatoes, cherry tomatoes, peppers, basil and other fresh vegetables are all grown in our garden, which is tended by tireless members of our community.

This has been going on for two years now, initially with four raised beds, to see if it could work. It has evolved slowly over time, with plenty of learning along the way. 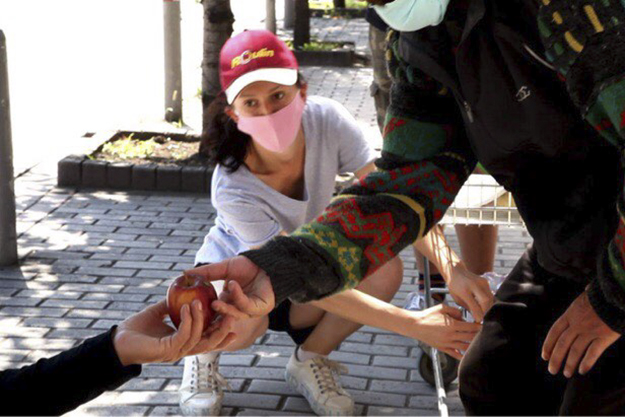 In 2020 it has grown dramatically, with 10 raised beds in total. All of it in line with our research on gardening, which plants we can combine to achieve better symbiosis, and so on.

Many volunteers like me have shown interest in the club, helping with new ideas, and we have seen a number of younger people who are interested in learning about gardening. The lockdown period may well have had an impact in raising interest, with more people wanting to get in touch with themselves and nature through nurturing plants.

Lately, the garden has been flourishing, as more of us join in, and we are constantly learning new things.

Those same volunteers introduced me to another initiative, one that had been on pause for months, called “Bukë për Krejt” (Food for All), that seeks to at least alleviate some hardships that are present in our communities, by preparing healthy meals for the most vulnerable and sharing it with them.

We come together to cook and deliver food for homeless people and those in need, to extend a little helping hand in trying times.

This is a volunteer initiative, with activists taking matters into their own hands and either preparing the food, or directly getting in touch with retailers and pubs like Soma who can provide material help.

We invite you to join this journey, to help with the work of the collective, and spread the word.

If you want to be a part of the initiative, whether through cooking, donations, distributing the food and more, you can write to us on our social media (Termokiss on Facebook or Instagram), or email termokiss@gmail.com. We also have donation boxes in Soma, Miqt Pub, Termokiss and Babaghanoush.

It’s also a project that has allowed us to use our home grown produce as ingredients in the food we make. Obviously, we still need to buy the main products like rice or potatoes, whether we want to make risotto or soup, but for the vegetables we try to use mostly homegrown, without pesticides and chemicals, grown only with love, water, and pure nutrients from the soil.

Every year in the Termokiss Social Center, the “Krejt ka Pak”(Everyone gives a little) festival is organized, where we hold workshops, concerts, student movies; generally, all the new activities we have done all year, would be condensed into one week. A manifestation of the year into one large event. Lasting a few days, the events start in the morning and go on until the night, so we spend entire days doing activities together, one of which includes cooking.

At the last edition, from December 2019 to January 2020 we had support from Meridian for food supplies. We saw that the food was more than enough for us, an overabundance actually, and at that moment we had the idea to cook for the less fortunate alongside the food we had for the event, and go around the city together and share it. Volunteers would buy groceries and cook broth, soup, stew in the Termokiss building. 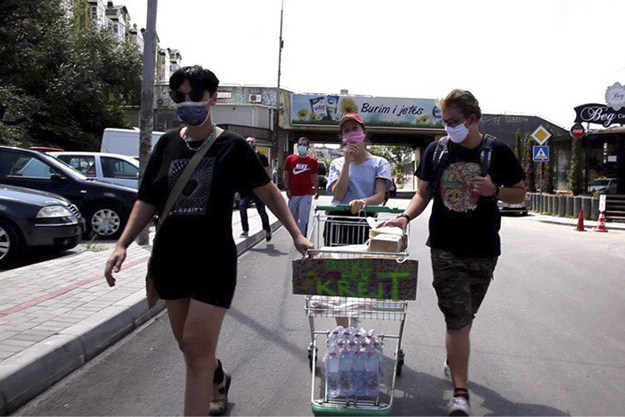 Many young people volunteer and find it provides them with a unique experience. Qazim Gashi / K2.0.

The idea turned out to work better than expected. It was winter. Every day we would gather together early in the morning to prepare the food, while two or three activists would walk around the city and share it with the less fortunate on those cold winter days.

The experience is unmatched. The touching looks of gratefulness would envelop us. It helped us see life from a whole new point of view that we had only glanced at from afar.

The little bit of help, for the benefit of someone without asking anything in return, to do something good for its own sake rather than ulterior motives, is something that a person must experience at least once.

“Give them love and they will give to you.”

When we met Sokol — who is homeless — he was on the street while we were giving away food for the first time this summer. This cheerful old fellow from Albania helped the crew with their cart while it was stuck, impressed with the initiative he introduced himself to the young volunteers, and has since become part of the community. “Give them love, they will give to you.” Sokol told us about plants, having prior experience in gardening and nature, sharing his valuable insights on improving our work with the vegetables and how to better take care of the tree saplings.

A talk with Sokol can keep one engaged for hours, whether it is about trees, about everyday city life, about the struggles of life and the present condition, about politics, about life in the village, animals, farming, you name it. From Sokol:

“The initiative impressed me, and then I was attracted by the humanity of it. Humanitarian acts are not only something moral or something that makes someone feel good, they are intrinsic to us, humans. We help because solidarity is our nature and divisiveness is forced on us. Now I come here, offer what I can offer.”

Meeting people like Sokol, working with the earth to bring food and learning to share what we have with those in need has changed me and enriched my life, opened my life up to new directions, new ideas, countless memories and new friends.