Those prepared to put themselves through a feat of cinematic endurance will be richly rewarded.

Alfred Hitchcock once said that “the length of a film should be directly related to the endurance of the human bladder,” which I suppose means that he’d have had little time for “Homeland (Iraq Year Zero),” a five-and-a-half hour documentary by Abbas Fahdel, which screened in its entirety yesterday at Shtepia e Kultures, mercifully with a fifty minute break halfway through.

My parents told me they once went to a screening of “Napoléon,” a silent black-and-white epic of the same length from 1927. I thought they were bonkers. I did make it the whole way through Claude Lanzmann’s ten-hour Holocaust documentary “Shoah,” albeit in four digestible chunks. Plus, my bus journey to Prizren was eight-hours long. 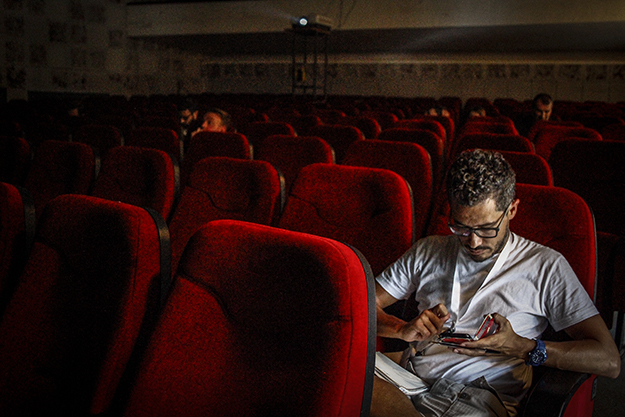 But Hitchcock does have a point. Basic instincts, I discovered, make you very selfish. Two and a half hours into “Homeland,” I started to resent these on-screen strangers, with their endless wedding dances and their interminable vegetable shopping. Just buy the damn tomatoes already. Clearly, everyone in Iraq is in less of a rush than my bladder. At one point, the only person I could sympathize with was the bored bride who had to sit watching everyone else have all the fun. The cinema was also unbearably hot, and given I spent the week prior to DokuFest on a clothing-optional campsite, I considered extending the ethos to Shtepia e Kultures.

Thankfully, “Homeland (Iraq Year Zero)” turned out to be a monumental work of art, an enthralling and deeply personal account of the year and a half before and after the US-led invasion. Few films convey everyday life in the shadow of war so effectively. It is at turns banal, touching, uplifting and devastating. Hitchcock was probably talking about bus journeys.

For the majority of the film, we follow Fahdel’s extended family, particularly his young nieces and nephews, who afford us a child’s eye view of the world around them. The boys traverse ancient ruins in the countryside and sneak into neighbours’ orchards, or watch Shakira music videos, giggling that “she wriggles like a fish.” I’m fairly certain that, two weeks prior to my country (the UK) bombing theirs, I was doing the same. And that palpable sense of dread looms over part one, subtitled “Before the Fall.” Wells are built in the garden “in anticipation of war,” rations are stocked up “in anticipation of war” and duct tape is applied to windows to prevent the glass from shattering. The Brits talk about ‘stiff upper lips,’ but the Iraqis have it in spades.

By part two, “After the Battle,” it’s clear that Fahdel’s film is not about major events but rather the space between them. Throughout the whole five and a half hours barely a bullet is shot, while carpets must still be washed and exams must still be taken. Life for his family remains much the same, but around them we witness the slow crumbling of society in the vacuum left by a deposed regime and an incompetent foreign occupation. 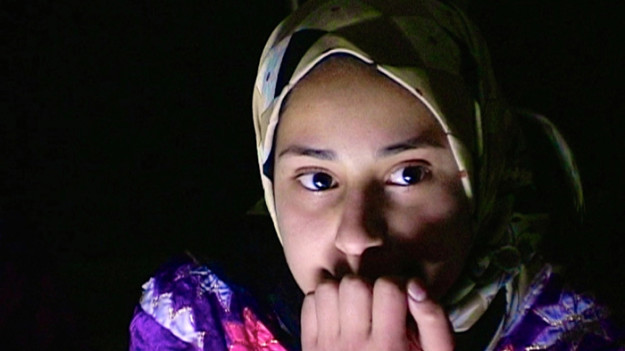 In the Q&A that followed the screening, Fahdel emphatically stated that events today, like those in Istanbul or Paris, are a direct result of what happened at that time. “They opened a Pandora’s box,” he said, “and the devils are coming out.” Countless homes are destroyed by US rockets yet the occupying forces and NGOs shrug their shoulders. “Even the Red Cross told us to rob,” says one newly homeless man. “I told him we are not thieves. They said that isn’t our problem.”

We also hear of innocent pedestrians executed on the street by US soldiers; when one young man is shot in the back for carrying something innocuous in his hand, it’s hard not to also draw parallels between these paranoid soldiers and the increasingly-militarized police back in their home country.

What struck me most with “Homeland” was how effectively it conveys the powerlessness of individuals in the face of political games of chess. Saddam Hussein and the US, it seems, are like Greek Gods with their petty spats and fickle whims. Part one is repeatedly punctuated by Saddam’s televised propaganda, in which he portrays himself as benevolent and messianic. Farmers and children hoke about Americans spying on them from distant invisible satellites, or bringing chemical warfare like a plague. In part two, the propaganda is replaced by vast ruins: museums, radio station, the national film archives — victims of inhuman battles on a grand scale. The future of “new Iraq” will be decided by the elusive Coalition Forces and NGOs. And families like Fahdel’s must deal with the consequences. 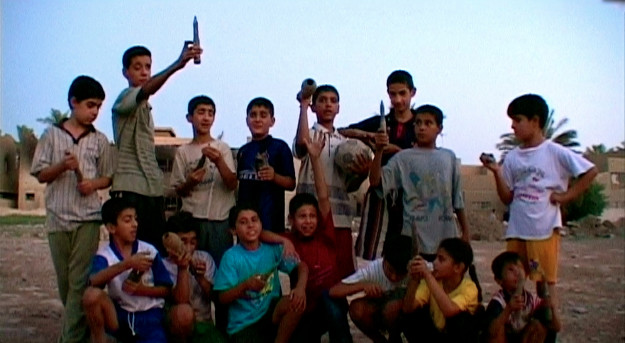 The film’s beating heart, however, is undoubtedly Fahdel’s nephew Hajdar, an eleven-year-old full of humor and wonder for the world. It is devastating then when a small caption unceremoniously appears at the bottom of the screen early on to announce that Hajdar will die shortly after the invasion. We don’t know how, or even if we will find out, but the knowledge punches a hole in your gut that refuses to leave for the remainder of the film. For five more hours, we must watch Hajdar learn and grow, knowing it is all in vain.

In one particularly uncanny scene, Hajdar visits the Al-Amiriyah shelter, which the US bombed in 1991, killing at least 408 civilians. “Uncle, look at the marks on the wall. Photos of people who died. The bodies were torn apart,” he says to the camera, guiding us through photographs of victims his own age. “Look at this mother. She mourns her son.” Will this be his fate? It seems, almost, as if he himself knows. Cinema here turns out to be both a cruel and humane medium. We can travel back in time to 2002 and watch him describe his own potential fate, but there is no way for us to intervene. No way to warn him.

Fahdel edited the film himself; having abandoned the shoot after his nephew died he subsequently resurrected the footage a decade later. Because of his omniscience, I began to dread every scene he chose to include, for what is he foreshadowing?

“I hope you never see another film like this,” said Fahdel in the Q&A, “because that means there is another war in another country.” Today, it seems Fahdel’s hopes are unlikely to be fulfilled.

At the clothing-optional campsite, I spoke to a fellow Brit whose concept of the Middle East seemed to be based on “American Sniper.” But while Fahdel made “Homeland” for his fellow countrymen, he mentioned that he had been touched when viewers in New York had stood up to hug him. “This film is the antidote to ‘American Sniper’…. They said they didn’t have an image of Iraqis [before this film],” he explained.

Not everyone made it through the marathon; many will never try. At the start of the intermission, 17 hardy audience members stumbled out of Shtepia e Kultures into the scolding Prizren light; by the time the credits rolled, we’d been reduced to 10, plus a few late arrivals. But for those of us who shunned the daylight for an afternoon in a dark sweaty room, we’d been rewarded with a cinematic experience that only comes along every few years.