Much promise and lessons to learn from Kosovo’s match with Iceland.

On Friday night (March 24) in Shkoder, Kosovo found themselves on the wrong end of a fourth consecutive defeat in World Cup qualifying group I, this time losing 1-2 to Iceland. Despite the loss, Kosovo put in perhaps their most assured performance yet, maintaining more possession of the ball and having as many attempts at goal as their opponents, who just last summer had appeared in a European Championship quarter final.

However, two mistakes from Kosovo’s full backs in the first half left the side with an insurmountable task. First, right back Fanol Perdedaj was caught stranded up the field. Hastily attempting to recover his position, Perdedaj’s attempted clearance only managed to present the ball to Arnor Traustason, who was able to find Iceland’s star man Gylfi Sigurdsson in space in the penalty area. Sigurdsson’s shot could only be parried by Kosovo goalkeeper Samir Ujkani, leaving Bjorn Sigurdarsson to tap into an empty net.

Ten minutes later, Iceland’s Birkir Saevarsson got in behind Kosovo’s left back Benjamin Kololli, who recklessly dived into a tackle, bringing down Saevarsson and conceding a penalty. Sigurdsson stepped up to make it 0-2. 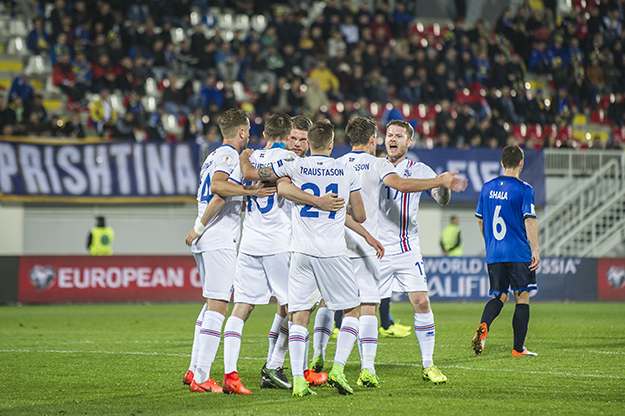 Iceland went 0-2 up with a Gylfi Sigurdsson penalty, although the half time scoreline was harsh on Kosovo, who showed plenty of promise. Photo: Atdhe Mulla / K2.0.

It was tough on Kosovo who had started the match well, looking composed in possession and with a clear game plan. Herolind Shala and Hekuran Kryeziu at the base of the midfield had controlled the early exchanges, frequently getting on the ball and working positions from which Milot Rashica and Valon Berisha could attack the opposition defence. Berisha hit the bar with the score still 0-0, meaning Kosovo maintain their record of hitting the frame of the goal in every game so far.

Despite the disheartening half time scoreline, Kosovo maintained the support of the crowd, who willed the team on all the way to the final whistle. Pre-match expectations amongst supporters in Shkoder had been that a draw would be a very good result, with few expecting victory. The bookmakers agreed, making Iceland firm favourites.

Any optimism that Kosovo could cause an upset was generated by their new arrivals. Three new players joined the squad for the match against Iceland; Besart Berisha, Donis Avdijaj and Atdhe Nuhiu. 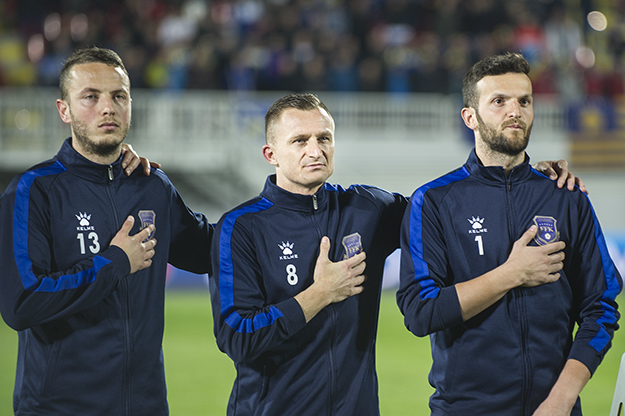 Besart Berisha (center) was one of three new additions to Kosovo’s squad for the match with Iceland. He is currently the leading goalscorer in the Australian A-League. Photo: Atdhe Mulla / K2.0.

Despite this being Kosovo’s fifth world cup qualifier, the same issues of uncertainty of eligibility were still unsettling the squad. Berisha, Nuhiu and Avdijaj had all previously represented other national teams, meaning that once again the team was sweating on decisions from FIFA over whether players would be permitted to represent Kosovo — Nuhiu and Avdijaj were confirmed just days before the game.

Earlier in the day on Shkoder’s Rruga Kole Idromeno, where fans of both sides had gathered before the game, four football shirts had almost camouflaged in with the mass of dark blue and yellow of Kosovo and Iceland’s light blue, but came from another place entirely. They carried the traditional blue and white stripes of Sheffield Wednesday, a team based over 2,500 km away in northern England. All four shirts had the same name printed on the back: Nuhiu. 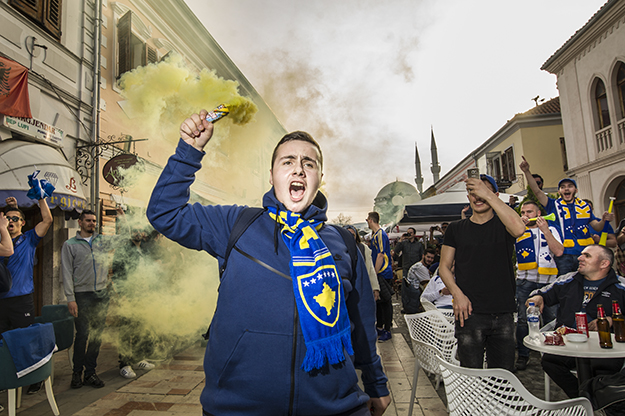 The proud owners of the shirts were a group of relatives from Presevo, who all have familial connections with the Sheffield Wednesday striker, and one of Kosovo’s latest recruits. A member of the group, Blerim Miftari, told K2.0 that with Kosovo still in its first year in FIFA competitions, they needed time and patience to establish their team. He added that while a win against Iceland was possible it was also unlikely, and that he’d be delighted just to see Nuhiu play and a Kosovo goal. Both wishes would be fulfilled.

Less than three minutes into the second half, Iceland failed to clear a set piece and the ball was lofted into the penalty area towards Besart Berisha and Amir Rrahmani. The ball bounced perfectly for Rrahmani, who comfortably dispatched the ball into the top corner of the net. 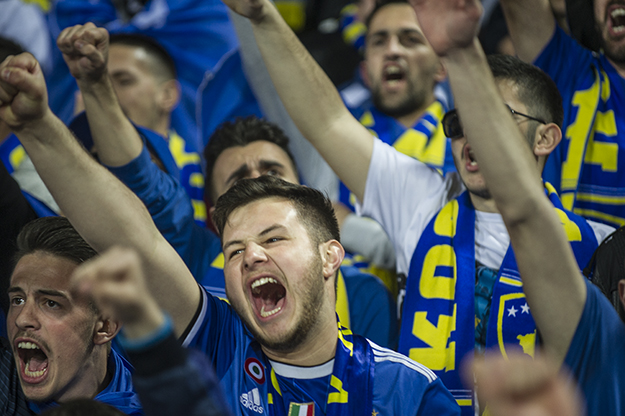 The celebrations were cut short by the assistant referee’s flag, which was raised due to Berisha being in an offside position when the cross was delivered. Goalscorer Rrahmani, lurking behind the striker had been onside, but Berisha’s attempts to play the ball had rendered him active. The goal did not stand, Kosovo still trailed by two.

Despite the setback, the Loro Borici stadium had come alive, and an electric atmosphere filled the air as Kosovo continued to press. Less than five minutes later, they had their goal.

Again Iceland failed to fully clear a corner. Rashica played the ball back into the penalty area and a defensive header could only find Valon Berisha. A delightful piece of skill from Berisha kept the ball in play and took him past Sigurdsson, before he delivered the ball to Shala, who was patiently waiting on the corner of the penalty area. Shala lifted the ball goalwards and Nuhiu towered over his defender to bury a header into the bottom corner of the net. 1-2. Kosovo’s first ever home goal in a FIFA competition, from a debutant given clearance to play just days earlier; his cousins from Presevo watching on from the stands must have been ecstatic. 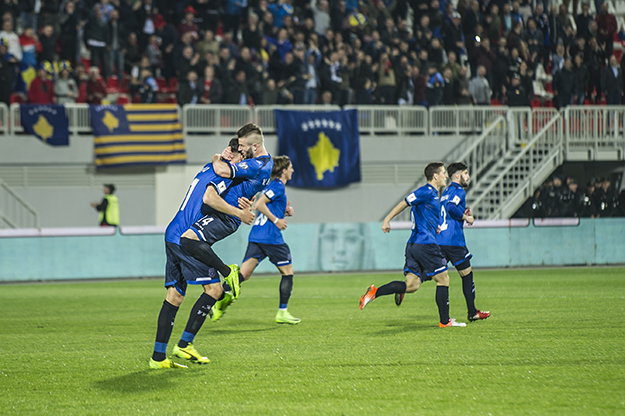 Atdhe Nuhiu’s second half header was Kosovo’s first home goal in World Cup qualifying matches, but it was not enough to save his team from defeat against Iceland. Photo: Atdhe Mulla / K2.0.

Whistles pierced the Shkoder night sky as Iceland came forward after the game was restarted. They grew even louder as a free kick was awarded and Iceland took nearly 2 minutes to take it. The opposition’s experience in winding down the clock was exhibited expertly over the next 20 minutes, as they betrayed their image of plucky underdogs and showed the hardened professionalism of a veteran side.

Kosovo brought on substitutes Avdijaj and Bersant Celina, which re-energized both the crowd and Kosovo’s attacking endeavour. A thrilling run and long shot from new boy Avdijaj nearly found a way past Iceland goalkeeper Hannes Halldorsson.

Bernard Berisha was also introduced late on, and caused endless problems for the Icelandic defence, but no real glimpses of an equaliser materialized before the full time whistle signalled another defeat for Kosovo.

It’s not just Iceland’s ability to wile away minutes and hold on to a lead in a hostile environment that Kosovo can learn from their opponents. In manager Albert Bunjaki and captain Samir Ujkani’s pre-match press conference, questions focussed on physicality, relying on stereotypes both of Nordic football being tough and physical, and of Kosovar Albanians being slight and tricky. 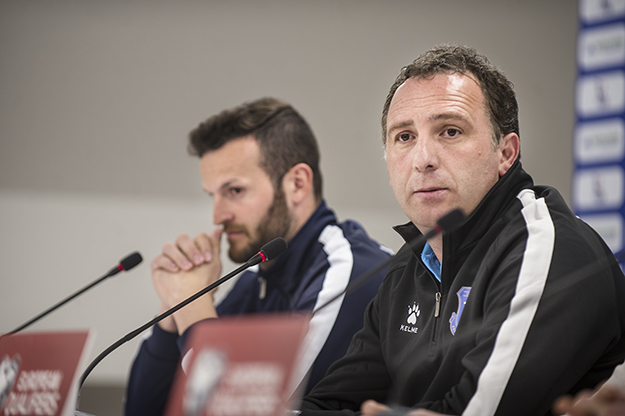 Kosovo’s manager Albert Bunjaki pointed out before the game that new additions to his squad had raised the average height of his squad. Atdhe Nuhiu, at 1.97 m, later rose above his defender to score Kosovo’s goal. Photo: Atdhe Mulla / K2.0.

Bunjaki pointed out that Kosovo now have two players approaching 2 metres tall in Besart Berisha and Nuhiu and that Iceland’s strength lies more in familiarity, with many of the team having played together since the age of nine. His assertions bore out during the game, with Kosovo scoring from a powerful header and Iceland’s goals being created by intelligent and intricate interplay.

Iceland’s success over the last years has been far more structural than physical. Over the last 10 years, Iceland has invested intensely in football. Where teams used to train alongside horses, now there exist indoor halls with capabilities for year round football training open in almost every town on the small island.

Indoor football halls are also a common sight in Kosovo, with three in Prishtina alone, and proficiency at indoor football has already translated into Kosovo’s futsal team experiencing early success, beating both Cyprus and Norway since recognition. Iceland have shown how, with the correct investment, teams trained indoors can flourish in an outdoor stadium.

"Kosovo is so close to being a fantastic team."

There has also been an incredible drive to train coaches in the Nordic state. Iceland has 850 coaches with at least a UEFA B license or higher; by comparison Kosovo, a country with over five times the population, has fewer than 200.

This concerted effort has reaped huge rewards for both the team and its supporters. Iceland fan Grimur from Reykjavik, has traveled to watch his team for over 10 years, and told K2.0 that for most of his life did so in the knowledge that he would never see his side qualify for a major tournament. Grimur and his friends found themselves the subject of endless attention on Friday night in Shkoder as they were inundated with requests for selfies and even television interviews.

He described his country’s participation at Euro 2016 as a ‘once in a lifetime’ experience, and ascribed their success to both the structural improvements in Icelandic football, and the professionalism instilled by former manager Lars Lagerback.

Lagerback’s successor and former assistant, Heimir Hallgrimsson, was full of praise for Kosovo after the match, describing them as “so close to being a fantastic team” and stating that his side were lucky not to concede a second goal. He also praised Bunjaki, for doing so well in difficult circumstances, with the uncertainty over who would be eligible to take the field, though added that perhaps Kosovo had been a little over ambitious in their attacking style.

Kosovo fans are still hoping that their ambition isn’t unfounded, and that one day, like Grimur, they will have their once in a lifetime experience at a major tournament. For now, every goal helps move Kosovo further up the FIFA rankings, and even narrow defeats against much higher ranked sides can help ― Iceland are currently 23rd whilst Kosovo lie in 164th place out of the 209 teams.

Kosovo’s sixth game against Turkey will again be at ‘home,’ though the exact venue is yet to be decided. Hopes can be high for another strong performance, and fans can perhaps even dream of that first elusive win.K

While Kosovo’s identity on the pitch is becoming more ingrained, off the pitch it is still causing controversy. A picture posted on Instagram by Milot Rashica showing the majority of the team attending Friday prayers in a mosque generated a wide debate, including a story from satirical outlet Kukunews, who reported that Allah responded by telling the players that the ball is round and that anything can happen.

Questions of nationhood as well as religion naturally also rose their head. Typically Kosovo’s fans have been adorned in a mix of both the blue and yellow of the Kosovo flag and the traditional red and black of Albania. On Friday though, sights of red and black were far more scarce.

Kosovo’s official fan group, Dardanet, marched to the stadium carrying a banner bearing the date of Kosovo’s declaration of independence underneath the slogan “Kosovo is Kosovo,” — in opposition to the much repeated of mantras of both ‘Kosovo is Serbia’ and ‘Kosovo is Albania.’

The banner was confiscated by stadium security who deemed it a political message, which are strictly banned by UEFA and FIFA. It also raised consternation amongst other fan groups in Kosovo; KF Drita’s fan group, Intelektualet, from Gjilan, ended their association with Dardanet due to the banner. In their social media post on the matter, Intelektualet included a photo of the group holding a flag stating ‘Kosovo is Albania.’