How one couple kept education possible

A Buçinca couple came to the aid of girls in Kosovo villages who were forced to quit school in the 1990s.

Every Monday to Friday, Bukurije walked almost four kilometers to the school in the nearest village. Her village didn’t have a primary school. She comes from Sllakofc village in Vushtrri and went to Hivzi Sylejmani school in Ceceli village, with students from three other villages.

In 1997, when she had just started seventh grade, she was forced to quit school.

Bukurije Krasniqi Bunjaku, now 36, talks to us about how she felt leaving school. “The worst feeling you can experience is having your dream cut short. In those days, when I quit school, I thought that everything came to an end. It was two weeks that felt like two years,” she says.

Before Bukurije went to first grade — in Spring 1990 —  Slobodan Milošević’s Serbian regime began segregating schools in Kosovo. Serb students went to school during the morning shift. Albanian students in the afternoon. A few weeks after the schools were segregated about 8,000 Albanian students were poisoned in cities across Kosovo.

That year, the regime dismissed Albanian teachers who refused to teach a new curricula that had been set by Belgrade. In 1991, Serbian police surrounded the schools and prevented Albanian students and teachers from entering.

Many girls from villages were not allowed by their families to make the long journeys to go to school for their safety. At this time the Serbian police had intensified their patrols.

“At that time, the conditions were such that we had no school in the village, so we had to walk about three and a half kilometers on foot. I had no girlfriends because they all quit school,” Bukurije says. 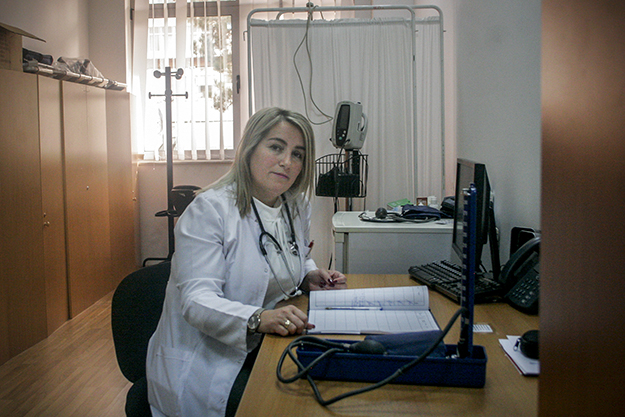 Bukurie says many families forced girls to quit school because of the severe economic and social conditions. “I wouldn’t say that economic conditions were the reason in every family, it was more so because of the mentality. Girls had to walk for many kilometers on foot during what was a bad time — bad things were happening. So the residents of my village prevented girls from going to school,” she says. “I was also part of that group because I was all alone.”

Xhyljeta Kodrolli from Dumnica village in Vushtrri experienced the same anguish. In 1996, she was unable to register in high school despite her desire to have an education. “I was very disappointed because I was a good student. I took part in all school activities. I didn’t leave school by choice. I liked it,” she says.

Naxhije and Fahri Buçinca are a couple from Vushtrri who went door-to-door during the 1990s to find girls who had quit school and to help them continue their education.

“Before the war, the situation was very difficult. I was the oldest child in the family and I was forced to quit school because of the economic conditions,” says Xhyljeta. “For my mother, quitting primary school was incomprehensible. She was the first girl in our neighborhood to graduate from the Economic high school.”

She says that had to accept leaving school because of her family’s situation. But she did not give up on her hope that one day she would continue her education. Two education activists came to her aid, along with many other girls from the regions of Vushtrri, Skënderaj and Mitrovica.

Naxhije and Fahri Buçinca are a couple from Vushtrri. They went door-to-door during the 1990s to find girls who had quit school and helped them continue their education.

“The education issue was targeted after the de-establishment of Kosovo’s autonomy,” says Naxhije. “For a people trying to achieve something, the abuse of education represents the biggest challenge. Our work started before the 1990s. But in the 1990s we hit our peak. Cultural and education institutions were being completely shut down in Kosovo,” she explains.

Although both were in their 60s, the will to emancipate girls kept them focused. “In 1991 we both retired. That is when the issue of girls’ education came to the forefront,” says Naxhije Buçinca.

The Buçinca couple focused their work on girls because females were the category that suffered the most deprivation from education. Naxhije says that for many families, the first daughter is like “a foreigner.” While the son is the one who will live with the family in the future and inherit their name and wealth. “The son represents the manpower of the future while the daughter is an alien,” says Naxhije about the mentality.

The couple’s activism in educating girls continued with the Group of Creators and Veterans of Education. The association was established in 1993. According to Naxhije, the association began work in the Vushtrri municipality. Their activism covered 60 villages. They would find girls who quit school and help them finish their education.

Afterwards, they continued to work in Skënderaj and later in Bajgora and Mitrovica.

They would verify who wasn’t going to school through the municipalities’ education offices where they were working. They would take the student registration lists and would knock on doors looking for girls who had quit school.

Xhyljeta Kodrolli, who didn’t register in high school in 1996 because she didn’t have the money, says that it was unbelievable to her that a couple had taken the initiative to educate girls; let alone that she would be helped. “When I was told that such a group would come, I didn’t think that it would actually happen. That someone would come to help me go back to school. That someone knows how valuable that is,” she says.

In November of that year, less than three months after Xhyljeta quit school, the Buçinca couple knocked on her door. “I was somewhere in the fields with my dad when one of the children came to call me. I was so happy when I saw them,” says Xhyljeta.

She tells us about the conversation that Naxhije and Fahri had with her parents. “Mrs. Naxhije told my father, ‘Besim, you have to give us Xhyljeta,’ and my father said, ‘I would surely do that. But I can’t.”

Xhyljeta goes on to explain that when it became clear that the problem was money, the couple offered to help by providing books, notebooks, clothes, as well as transportation. They covered the cost of a monthly bus ticket. “The next day, I began going to the social-linguistic gymnasium in Maxhunaj village. I wanted to go to medical school, but it was too far away, in Mitrovica,” Xhyljeta recalls.

For the Buçinca couple, convincing parents to allow their daughters to go back to school was more difficult in cases when the mentality - rather than poverty - was the reason behind their reluctance.

Bukurije Bunjaku Krasniqi also recalls the first time she was visited by the Buçinca couple. “Speaking with them, my parents were not categorically against the idea of allowing me to continue my education. On one hand there was the economic situation. On the other, there was the fact that I was alone, the journey on foot…” she says. “With the will of my family and the Buçinca couple who came to visit many times, I went back to school.”

Photo courtesy of the Buçinca family.

Today, thanks to the continuous support from the Buçina couple throughout her education, Bukurije is an ophthalmologist. She works in the Directorate of Health Services for the Kosovo Police force. Xhyljeta is a jurist and has experience working in banks.

Some attempts were more challenging

For the Buçinca couple, convincing parents to allow their daughters to go back to school was more difficult in cases when the mentality — rather than poverty — was the reason behind their reluctance.

They tell us about the “policy” they used to convince families who were more stubborn. “Who is the biggest enemy today? Milošević and his regime. What did he destroy first? He destroyed schools. Do you know why they destroyed schools? Because people progress through education,” says Naxhije Buçinca.

According to them, parents immediately responded by saying that they were against Milošević’s plans for Kosovo. “[They would say to us] ‘No, we are against this.’ So? Both men and women should fight equally for the freedom we are trying to achieve. To fight this cruel regime that we are living under,” says Naxhije.

When lack of money was the reason, the couple took over the responsibility of educating the girls by providing schoolbooks, clothes and bus tickets. “We would knock on the doors of some small donors, small markets, gas stations and households who were more well off,” says Naxhije. “They were all ready to contribute to education.”

But there were quite a few cases where parents were determined not to allow their daughters to go to school.

This was the case of Shkurte from Samadrexhë village in Vushtrri. She was the youngest of six daughters. The couple says Shkurte’s father would avoid them each time they visited the home.

“Shkurte’s grandmother said ‘Come tomorrow, her father is working in the potato fields,’ so the three of us — Fahri, Fakete Kusari and I — went to the fields,” says Naxhije. “Shkurte’s father lifted the hoe, hit the ground with it and said ‘Take the girl! Do whatever you want.”

Today, Shkurte is a nurse.

At times, Fahri explains, relatives weren’t the ones who tried to prevent girls from going to school. Education workers were also not supportive. “We did not only have issues with parents. There were also 11 teachers and one headmaster in Pantinë, Vushtrri,” he says.

He says some education workers would erase the names of their relatives from the lists. “He [the headmaster] erased the name of his daughter. He didn’t tell us about her. When we went to visit the other girls, the girls wanted to see the registry. They asked where the headmaster’s daughters’ name was,” says Fahri.

“That’s what kept us alive, the joy that we felt from putting a girl back in school."

At times, doors were shut right in their face. “We had cases that were even more severe. In Rreznik, Vushtrri, four brothers — three of whom went to school, the other was a school secretary — prevented their sister from going to primary school,” recalls Fahri. “They told us ‘don’t come to our house again.’”

Naxhije and Fahri Buçinca, remember what kept them going, “It is interesting. We were exhausted from all the turmoil. But we would go out every morning and when we’d return in the evening, we’d say ‘Oh, we had a success,’” says Fahri. “That’s what kept us alive, the joy that we felt from putting a girl back in school. It is what kept us going until today.”K