How to tell stories otherwise

It was the beginning of August, during those seemingly never-ending sultry days of summer, when Vanesa Orana came to the conclusion that the streets of Prishtina were way messier, steeper and narrower than she had ever realized. As someone who has lived all her life in Prishtina, Orana is familiar with the capital’s urban chaos. Now in her last year of undergraduate architecture studies, she has been doing some heavy reading on Prishtina’s messy urban planning.

Yet it wasn’t until she spent the summer collecting visual data from around 2,000 streets across the capital that she saw urban issues in Prishtina with a more critical eye. Part of a team of around 15 architecture students at the University of Prishtina, Orana traversed and recorded footage of almost every corner of the city — from Skanderbeg Square to Kodra e Trimave to Sofali — either by foot while wearing a helmet with a mounted camera, or by car with an attached camera. 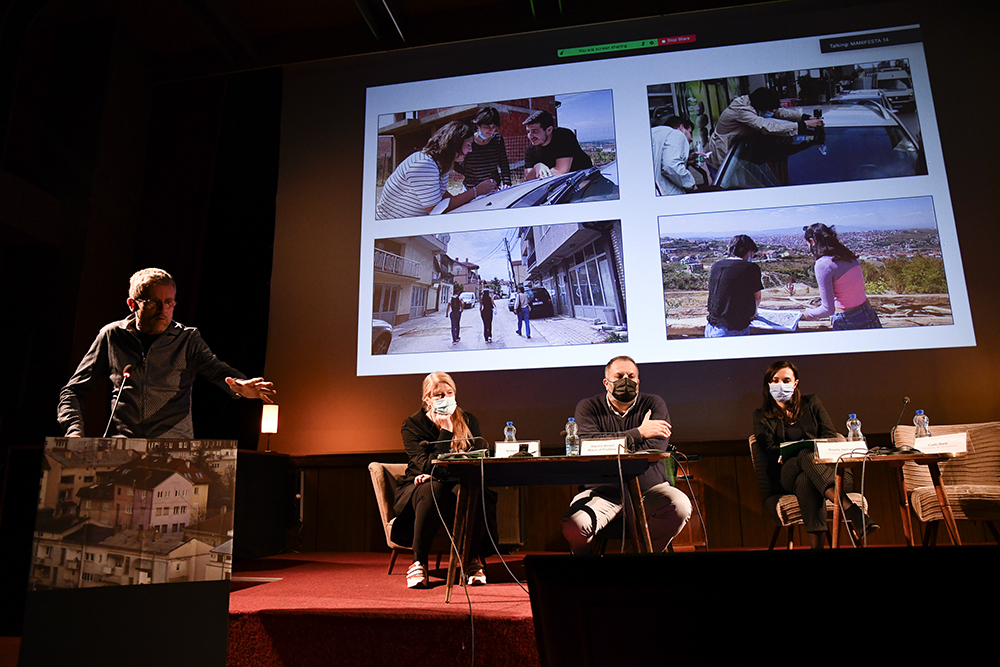 Fifteen architecture students fanned out across the city and gathered visual data from practically every street in the city. Photo credit: © Manifesta 14 Prishtina | Atdhe Mulla

“In our urbanism course we’ve discussed Prishtina’s heavy traffic, the lack of public spaces and obstructed sidewalks; however, you notice these problems much clearer when you get to analyze each road closely. I feel I know Prishtina better now,” Orana says, recalling her fieldwork experience.

The architecture students’ mapping study is one of many elements of the Urban Vision of the upcoming edition of Manifesta, a nomadic European art biennial that will take place in Prishtina in 2022. Aiming to understand how the city’s public space gets used, the study looks into the movements of people, bikes and automobiles, and the interaction between them. The billions of video frames recorded by the students have already been sent to the Senseable City Lab, a research space at the Massachusetts Institute of Technology (MIT) that combines urban planning, architecture and computer science.

There, the visual data will be synthesized with artificial intelligence to create a unique urban map that will inform the interventions of the Manifesta Biennial’s 14th edition, which will start in July 2022 and run for three months.

Manifesta is hosted in a new city every two years and consists of a range of activities that include art exhibitions, discussions, public space interventions and publications. Bringing together local and international audiences, it seeks to initiate a dialogue about artistic production, theory, politics and social change between different spaces and cultural contexts. The last two editions were in Marseille, France and Palermo, Italy.

Manifesta will intervene in some of the iconic buildings in Prishtina that have been neglected for years.

Under the title “it matters what worlds world worlds: how to tell stories otherwise,” the biennial’s 14th edition in Prishtina focuses on deploying storytelling and narrative practices as tools of civic and political engagement to rethink and transform existing social, ecological and urban environments.

Manifesta’s director and founder Hedwig Fijen says that over the past months they have organized temporary urban interventions, mapping studies and discussions with public institutions, academics and local organizations to identify the public spaces they hope to reimagine through artistic interventions. 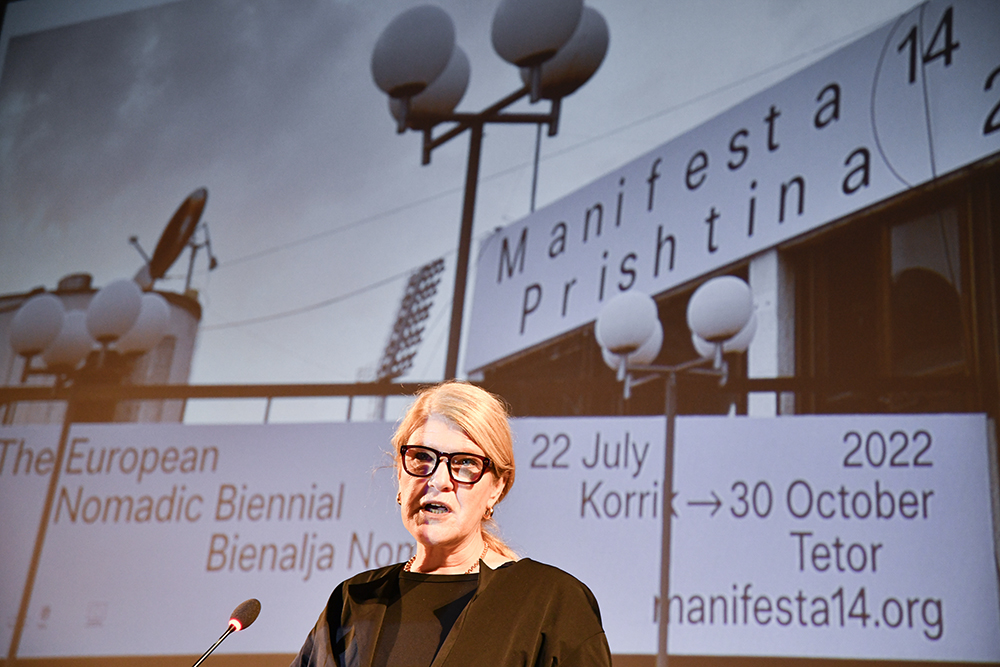 “Except for the artistic part, there are of course also educational projects [in the program],” Fijen said. “And I think that the artistic component and the preliminary research are now coming together. The projects that have been proposed by the curator are key to understanding and exploring what the existing public space could mean for the city in the future.”

The Urban Vision and Curatorial Concept include plans to intervene in some of the iconic buildings of brutalist modern architecture in Prishtina — The Palace of Youth and Sports and the Grand Hotel among others — as well as spaces such as the Brick Factory and former Hivzi Sulejmani library that for years have been nonfunctioning and neglected. 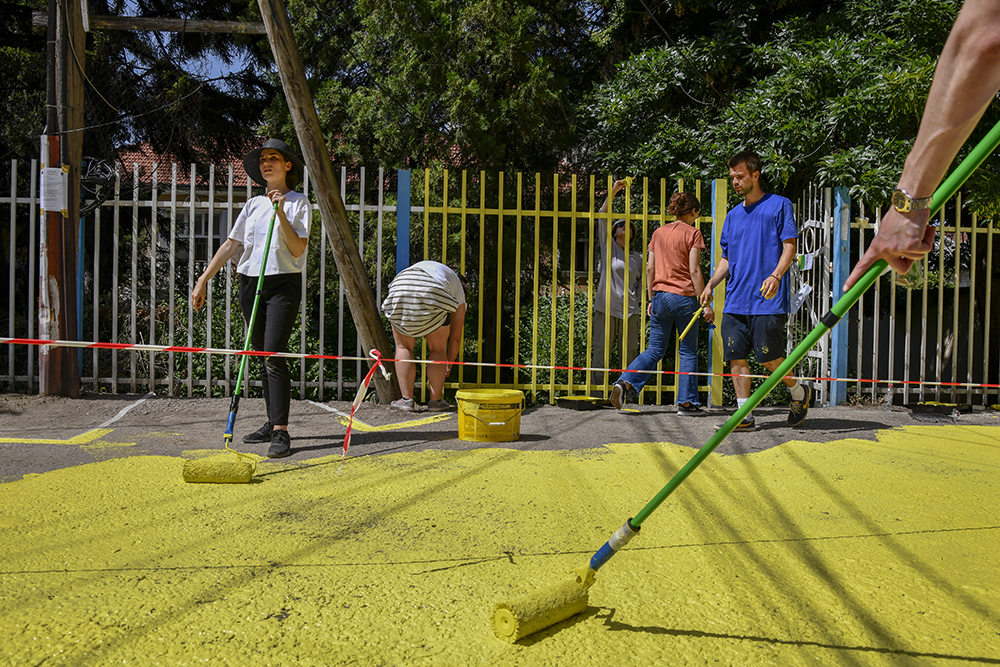 “We believe that this is a draft concept, and we will propose other spaces as well, specifically those such as the House of the Hertici family, the Dodona Theater, Hani i Dy Robertëve, or the Mother Teresa Society building,” he said.

Experiments in the city

The first urban interventions of Manifesta 14 have already begun. This summer the team of architecture students, led by Carlo Ratti, began a coordinated campaign to draw the public’s attention to neglected public spaces in the city. They took over the Brick Factory, an abandoned post-industrial site, and temporarily turned it into a laboratory of participatory urbanism.

“During the gatherings we had at the Brick Factory, we came up with the idea of organizing film screening nights there, as a way of reclaiming that public space,” Orana, the architecture student, said.

For Ratti, these kinds of temporary urban interventions are at the core of open source architecture — the approach of transforming a city by engaging residents to make urban changes. “​​Like in the case of [open source] software, it means giving everybody a chance to contribute to the making of the city,” he said. “In open source architecture, you think of urbanism as something that goes back and forth between proposals, installations, transformations — all while analyzing, using and implementing the feedback of the people.” 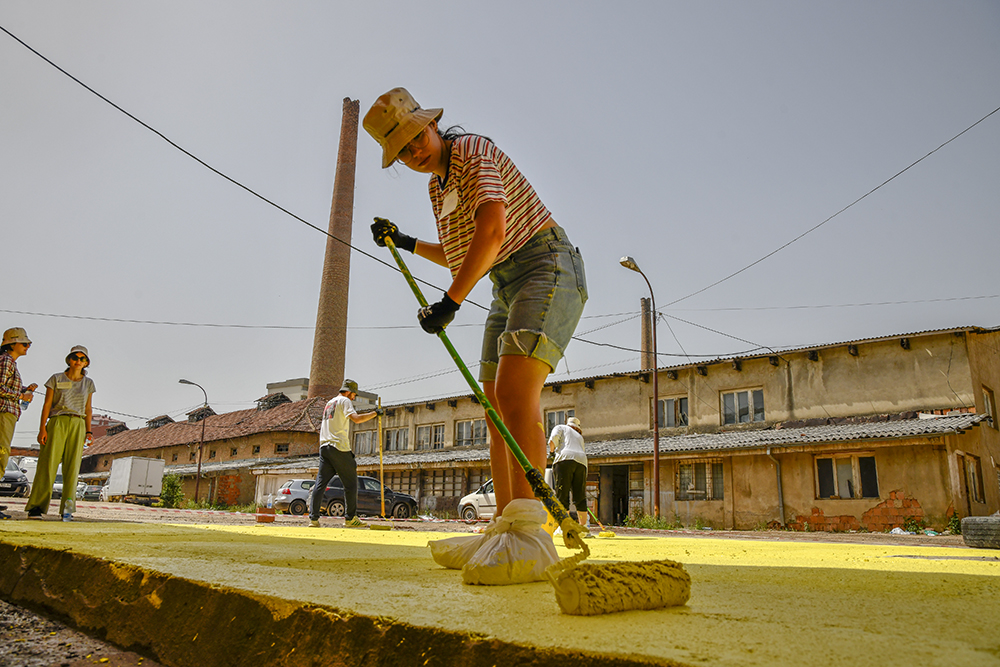 “The whole point is that we need to try things — some of them will be more successful, some less. That will teach us whether we should turn temporary interventions into permanent ones or not,” said Ratti. “We would want to see something that’s not successful, because that would tell us what people don’t want.”

One of the proposed experimental interventions of Manifesta 14 is the Missing Bridge, which would connect the platform of the Palace of Youth and Sports with the Grand Hotel’s, a distance of around 500 meters. The bridge’s name derives from the fact that it was part of the city’s urban plan in the 1970s. It was intended to allow the hotel’s visitors to reach the sports complex without needing to cross the road. However, it was never built, and remained almost forgotten in old sketches.

Now as part of Manifesta 14’s Urban Vision, it is hoped that the Missing Bridge will breathe new life into both of the platforms, which are poorly maintained and underused. According to Ratti, the bridge would require little investment to construct. If it proves a success the bridge can become part of the long-term urban legacy of the city. 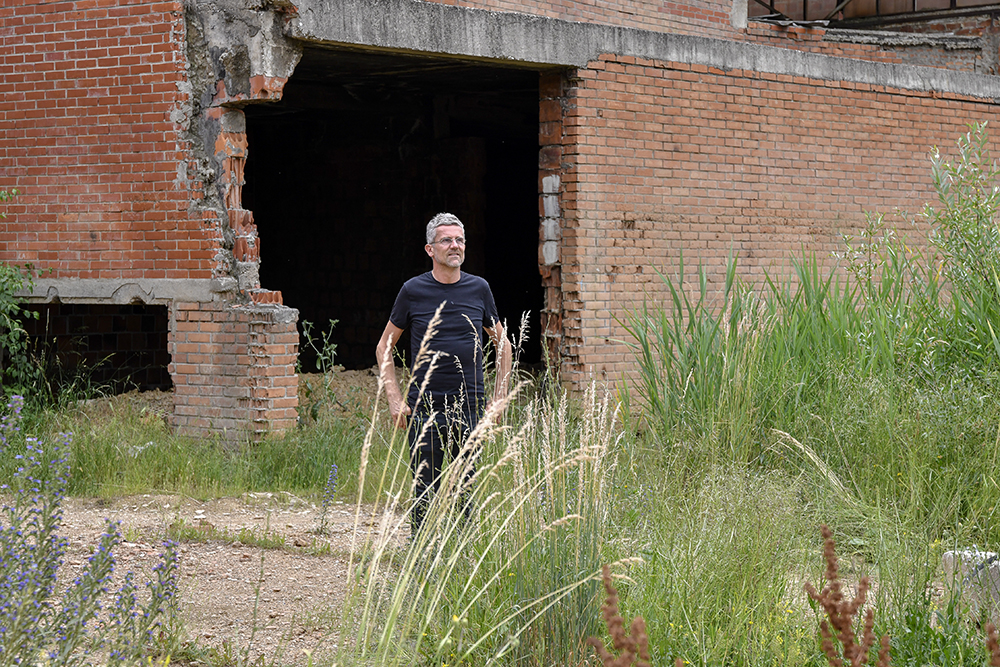 Another proposed intervention to reclaim public space is the Pedestrian Path, a repurposing of the nonfunctional railroad tracks that form a boundary between the Arbëria neighborhood and the city center. The plan is to transform the tracks into a green walking lane that would link one side of the city with the other.

A similar proposal was made in 2014 by the Kosovo Architecture Foundation (KAF), a local partner organization of Manifesta 14. KAF’s director Bekim Ramku says that the initial plan was to transform the railway into a space similar to New York City’s High Line, a disused elevated railroad in Manhattan that was transformed into a popular urban park.

​​However, due to land ownership issues and plans to reactivate the railroad, KAF’s proposal was not approved by the Municipality. Then in 2019 Prishtina’s Sustainable Urban Mobility Plan proposed the establishment of a light rapid transit line along the existing railroad tracks, which would connect Fushë Kosova, Prishtina and Podujeva, and, eventually, the airport.

Considering these plans, Ramku is skeptical that the Pedestrian Path could become permanent. “Many cities globally are turning old railroad tracks into bike or walking trails. However, in Prishtina I think this intervention could work only temporarily since there are already plans to put the tracks into function,” he said, adding that he thinks the residents of Arbëria should be empowered to make the final decision.

Storytelling as a practice of change

At the center of Manifesta 14’s artistic curatorial concept is the idea of working with memories, narratives and stories that get excluded from the public realm. For Catherine Nichols, the curator of the biennial, storytelling is a crucial tool for engaging in political action and imagining new possibilities for the future. “If we just keep telling the same story, it always ends badly — it is always masculinist, capitalist, human-exceptionalist and we’re not doing well with that story, no one is. So, the idea was to think of new subjectivities and work with the amazing practices that are already here [in Kosovo],” Nichols said. 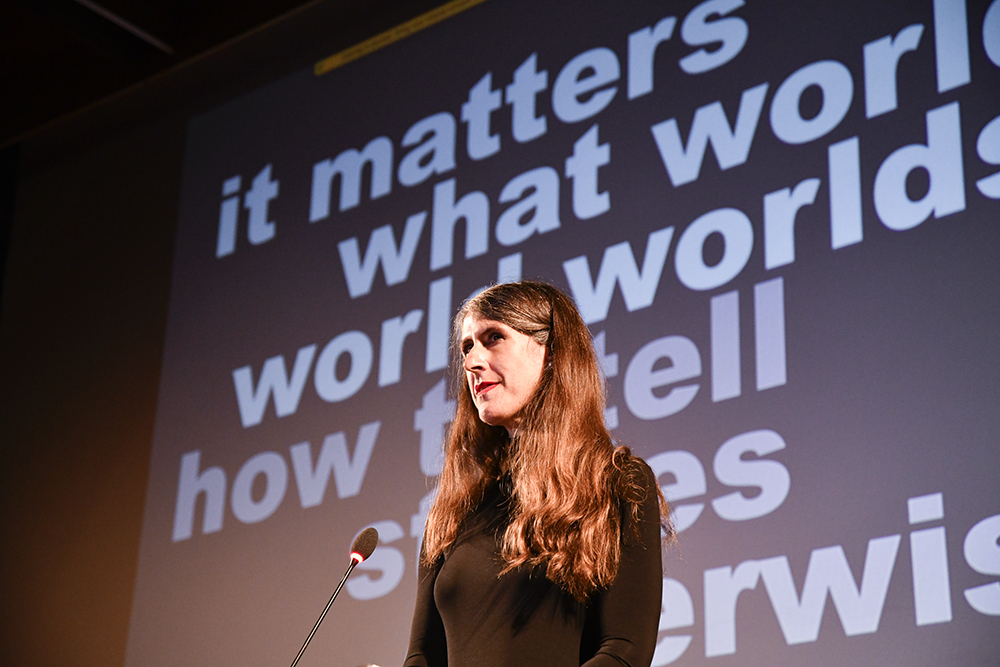 Drawing from the work of feminist scholar Donna Haraway, Nichols came up with the title of the biennial, “it matters what worlds world worlds: how to tell stories otherwise,” as an invitation for people to stumble a bit and think about what it means for everyone to participate actively, through different collective practices, in the making of the world we live in. “I wanted to insist on the agency that we have, because that’s our power to change things. It was an insistence on the poetry, on the activity, imagination, and in the fact that it’s something that involves everybody,” she said.

There are six proposals as part of the curatorial concept. One of them is the Center for Narrative Practice, planned for the former Hivzi Sulejmani library. The Center will serve as an accessible institution of study, experimental learning and creation that will include a library, reading rooms, exhibition spaces, media production studios and a radio station among other things.

The two-story building with a pinkish façade, picturesque garden and the year 1930 engraved on its front wall is full of stories from different historical periods. Said to have belonged to a Jewish merchant from Prishtina, from 1944 to 1948 — when it was transformed into a library — the building served as the headquarters of the Committee of the Communist Party of Yugoslavia in Kosovo. It remained a library for nearly 70 years until 2016 when the library moved into a new, more spacious building. Since then, the building has been unused and closed to the community.

“It is important to document the nuanced narrative and the experiences of different groups of people around the building in order to preserve its past.”

To document and preserve the legacies of these histories, Shtatëmbëdhjetë, an organization that uses art and culture to discuss the role of public space and abandoned buildings, has facilitated memory mapping research about the Hivzi Sulejmani building, with the invitation of Manifesta 14’s Education Department. A team of seven researchers gathered archival materials and interviewed local residents and former library visitors and staff to create a portrait of what the building means to the community [disclaimer, the article’s author participated in this research].

Ajete Kërqeli, development manager at Shtatëmbëdhjetë, says that the research is intended to inform the education program of the future Center by looking at different stories, initiatives, activities and literary groups related to the work of the library. “It is important to document the nuanced narrative and the experiences of different groups of people around the building in order to preserve its past and understand in what ways it served the community,” Kërqeli said.

Other urban interventions include an eco-urban learning center at the Brick Factory, a multidisciplinary research center at the Grand Hotel, an online Radio Manifesta station either on the rooftop of the former Radio Prishtina building or on Mother Teresa Boulevard and a series of walks around the old town. There will also be 20 public art installations spread across the National Library, Kino Rinia, the Albanological Institute, the Rilindja building, the Gërmia swimming pool and other locales.

Nichols is particularly excited about the intervention in the Grand Hotel. “The place is really fascinating,” she said, adding that it represents to her a failed promise of progress. “The hotel, as a sort of a liminal space where people come and go suggests travel and at the same time, it suggests stagnation. It promised international exchange, grandeur, and flourishing, and now is the opposite.”