Human trafficking on the big screen

It is midnight. An 11-year-old boy is observing a big mural containing a woman’s face. A petrified woman runs to him and sits beside him. Seated on the bench in the quiet underpass, somewhere in Ferizaj, they observe each other in silence.

“Shouldn’t you be at home at this time having nice dreams and not checking whether I look like the woman in the picture?” the woman asks.

The bruises on the face of Lena (played by Gresa Pallaska) and Gent (played by Mal Noah Safqiu), that coincide with the symmetry of the mural above their heads, mark the unusual situation of both protagonists. They are both curious to know what the other is doing at that time, but neither tells the truth, allowing the silence to allude to more than words could.

They have more in common than just their scars: Everyday they head the same way, searching for money under the orders of a person that for one is a “husband” and the other is a “father.” Even though they don’t know each other, they share the same fate: living in modern slavery.

It is not a coincidence that this film is part of DokuFest, whose topic this year is truth. Under the motto “Truths Lies Here,” this year’s DokuFest edition (2-10 August) joined the global discussion on fake news, “on what is the truth and what is a lie and the way this impacts all of us.” It was one of 282 films that were selected to be shown during the nine days of the festival. 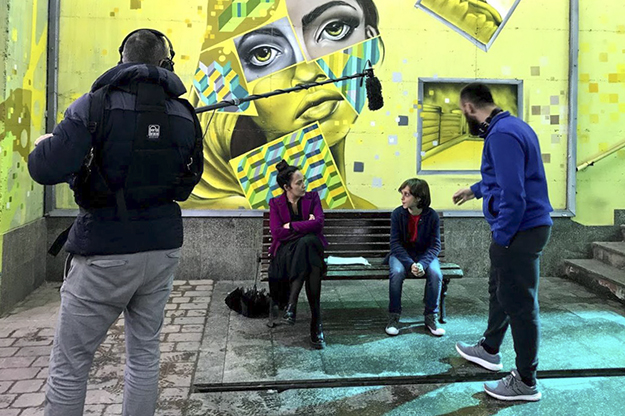 Through Lena and Gent, the 15-minute artistic movie presents the gloomy daily lives of victims of human trafficking.

Speaking to K2.0, Ugzmajli explains that through his films he tries to portray different cases of social injustice, especially when the victims are women and children, whose rights are violated in a systematic way. Even though the film isn’t based on a specific real story, the filmmaker has continuously heard about different cases, and has therefore decided to use art to raise society’s awareness regarding this phenomenon.

“Human trafficking, or how it has become known lately as a type of modern slavery, is a concern for the whole society, and no matter how much the society and the institutions try to fight it as a phenomenon, it varies in order to escape the law and those fighting for it, and it has become an extremely widespread phenomenon,” Ugzmajli says. “These concerns that I am mentioning are some of the reasons why I have decided to present them in an artistic way, in this case through a film.”

Human trafficking remains a phenomenon facing Kosovo’s authorities; Kosovo Police reports show that in recent years the majority of victims, Kosovar women and girls, have been trafficked for sexual use, just like “Lena” in Ugzmajli’s movie. Another form of trafficking is child labor, with minors often being made to beg for money, as portrayed by Genti in “Rruga.” 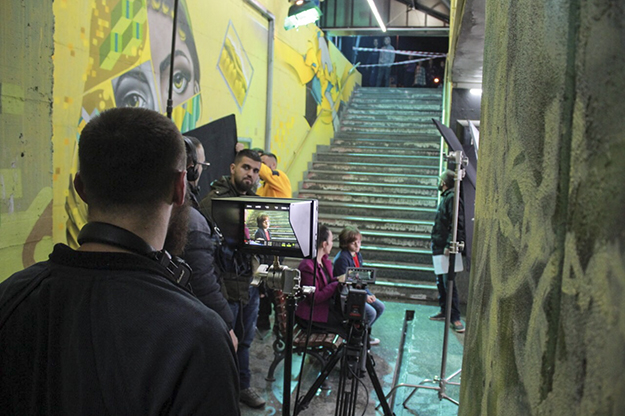 A scene during the shooting from the movie “Rruga.” Photo: Besart Bega and Kushtrim Ugzmajli.

The film’s drama plays out in a single scene: Lena and Genti (or Besa and Drini) meet after their daily “excursion.” They are forced to live with a second identity. Besa, under the guise of Lena, presents herself as a happy housewife who has just returned from her vacation in Venice. Whereas Genti presents himself as Drini, who has just come back from the “excursion” with his friends, and tells how his “father” loves him and cooks for him.

“Two variations of the two protagonists are seen in the movie,” Ugzmajli explains. “First, through these stories they have, they manage to lie to their clientele, and at the same time their story is an alternative life that they would love to have.”

Ugzmajli’s films are also known for their endings without epilogue.

The end of “Rruga” alludes to the idea that “tomorrow” the protagonists will start the next “excursion.” Lena and Genti understand that they are victims of the same trafficker, they give the collected money to him and swallow his mockery in silence.

Ugzmajli tries to present the drama that is caused in people’s lives by a specific event, leaving the audience free to judge the case.

“Practically I don’t work a lot in a message, or it isn’t my creative investment to send a specific message, but to send a number of messages, messages that I shouldn’t necessarily know,” he says.

“Maybe I do have a main purpose, but the most important thing for me it to bring something with different associations to the viewer so that they can have different perspectives.” 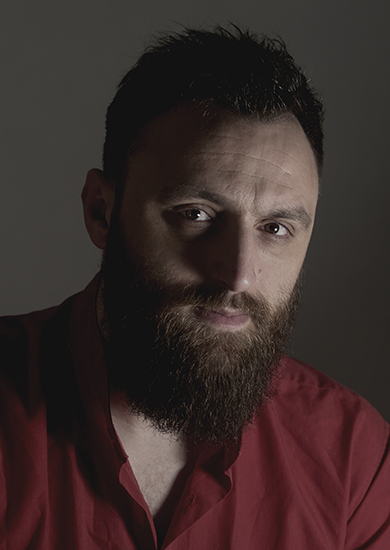 Filmmaker Besim Ugzmajli was named Artist of the Year in his hometown of Ferizaj in 2018. Photo: Kushtrim Ugzmajli.

Ugzmajli adds that now, in a time of images, film has the power to be a starting point, to raise questions and to call for an institutional reaction.

The 32-year-old filmmaker, who says that he creates his films with his savings, without institutional support, has also realized the films “Erë,” “Forgive Me,” “The Eaters,” “A Week in Kosovo,” and “Përtej portave.”

“Forgive Me” — the drama of a Kosovar who joins a terrorist groups in Syria — was nominated at the CinEuphoria Awards 2019, in the category of Best Short Film, while Ugzmajli himself was nominated for Best Director of a Short Film. Agron Shala, who plays in this film, won the Best Actor award. Last year, Ugzmajli won the Artist of the Year award in his hometown, Ferizaj.

He is now finishing the script for a new film called “Ditë e kuqe,” which he says is about women in arts and that it will be filmed at the end of the year.

In addition to DokuFest, “Rruga” has already been chosen to be part of the Edmonton Film Festival in Canada, as well as in Rhode Island International Film Festival.K

Feature image: Scenes from the movie.