The inaugural session of Kosovo’s Assembly descended into chaos today (August 3), without a president of the Assembly, nor deputy presidents, being elected. The chair of the inaugural session, Vetevendosje’s Adem Mikullovci — who at 76 was entitled to chair the session due to being the oldest deputy — appeared to close the session accidentally, before a nomination for the president of the Assembly had been made.

After a period of confusion, it was announced that the session would re-start at 15:00, although it was subsequently postponed until Friday after the PAN coalition of PDK-AAK-Nisma, and minority party deputies, failed to reappear and a quorum was not achieved*.

Mikullovci’s error occurred after the PAN coalition  had requested a two hour pause of the session for “further consultations,” in order to ensure they had the 61 votes required to elect their nomination for Assembly president. Although the name of their nomination is yet to be officially declared, it is widely believed to be PDK leader Kadri Veseli. 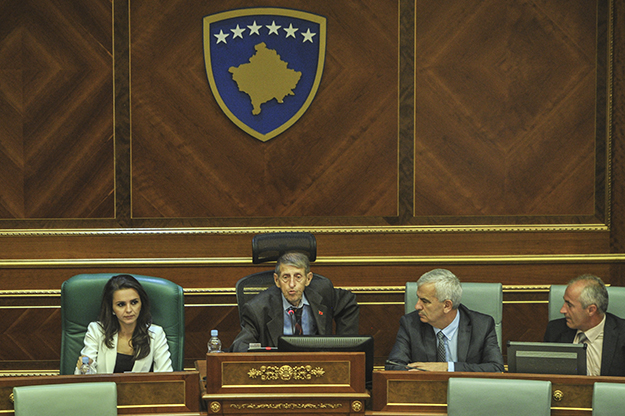 As the oldest deputy, Vetevendosje’s Adem Mikullovci was chairing the inaugural session of the Assembly. Photo: Atdhe Mulla / K2.0.

The PAN proposal to hold a break had been rejected by deputies, in what was officially a 60-60 split, although even that was debated, with Nisma’s Milaim Zeka declaring that he had not voted in favor of the proposed break, having said he was confused about what he was voting for. Regardless of the vote of Zeka — who had been counted as one of the 60 votes in favor of the proposal to pause — 61 votes would have been required to hold a break.

The request for a break for further consultations, and the rejection of such a request by the Assembly, suggests that PAN did not have a majority of the 120 deputies in favor of their pick for Assembly president and was attempting to buy more time to persuade others to vote for their nomination.

After PDK’s Enver Hoxha took to the floor saying that it was Mikullovci’s duty to do what he could to ensure an Assembly president was elected, and therefore the pause should be agreed to, Mikullovci said, “With this I close this meeting.” Deputies began to file out of the Assembly hall, with Mikullovci making unsuccessful attempts to continue the session. 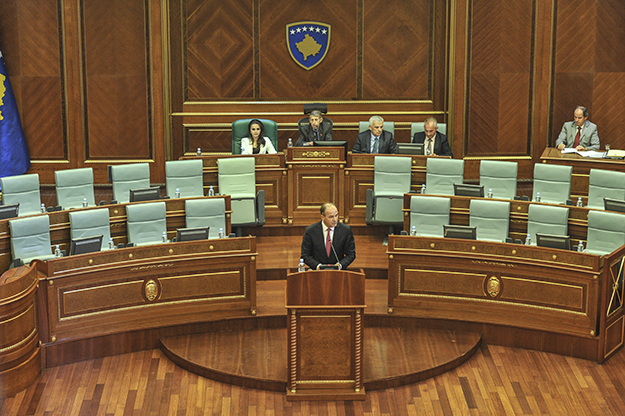 There had also been confusion earlier in the session as PAN were not present for the nomination of members to join the mandatory ad hoc verification committee that ensures the constitutive session is run according to the rules of procedure. PAN deputies entered the hall immediately after the candidates had been nominated. After a brief pause, the committee proposed to allow PAN to nominate its own representatives for the committee, however PAN were once again not present in the Assembly, so the deputies that were present voted to proceed without them. After another pause, PAN parties were allowed to nominate their own representatives for the committee.

LDK’s Teuta Rugova, who as the youngest deputy was entitled to assist with the chairing of the constitutive session, was also missing for much of the session, before returning to vote in favor of holding the two hour break. In recent weeks there has been persistent speculation that Rugova will vote with PAN against party lines in the election of the Assembly president, and later of the government. 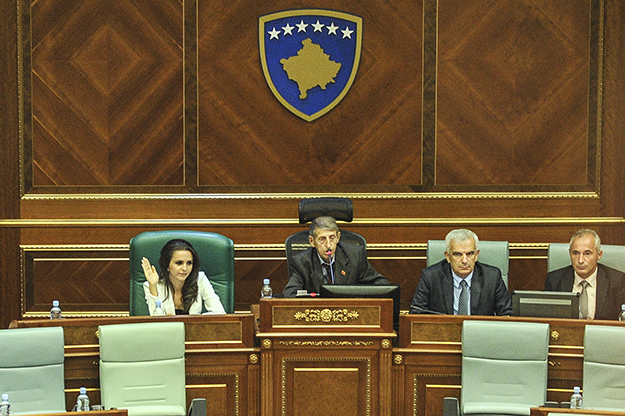 LDK’s Teuta Rugova, who is the subject of much speculation that she will defy party lines to vote with PAN, was one of those who voted to pause the session for “further consultations.” Photo: Atdhe Mulla / K2.0.

Before the session was accidentally terminated, all 120 deputies had undertaken the required solemn oath, read by Mikullovci.

The oath sworn by Assembly members:

“I, Member of the Assembly of the Republic of Kosovo, swear that honestly and with devotion, shall carry out my duty and represent the people with dignity, shall work in the interest of Kosovo and all its citizens, shall be committed to protection and respect of the constitutionality and lawfulness, for protection of the territorial and institutional integrity of Kosovo, for guaranteeing human rights and freedoms, in accordance with the domestic laws and European standards.”

*Editor’s note: This information was updated on Thursday, Aug. 3 to reflect developments.