Inside the homes of Albanians in Turkey - Kosovo 2.0
In-depth | Migration

If you speak Albanian in the streets of cities in Western Turkey, it’s highly likely that you will encounter a local with Albanian origins. The data suggests that around one million Turkish citizens have Albanian origins. Some say this figure goes up to five million.

Although there are no exact numbers, history shows that there was heavy migration during the Ottoman era. Migration continued throughout the 20th century as a result of people escaping from the oppressive Yugoslavian regimes. Agreements signed between Yugoslavia and Turkey also allowed the migration of Albanians to Turkey. Many Albanians simply migrated in search of a better life, as they had relatives who lived in Turkey. Last October, during a visit to Ankara and Bursa, K2.0 had the chance to meet many individuals and families who continue to passionately preserve their origins as an important part of their identity.

Get to know some of them!

One day last October, Serkan Sarikavak was working in his stand in the district of Batikent in Ankara when he heard a familiar language. Initially, the words he heard sounded like Russian, then Albanian. Then he heard the word “gjashtë” (six). He no longer had any dilemma.

Excited to hear the mother tongue of his ancestors, he immediately began conversing with three Kosovars. They were wandering into the suburban bazaar of the Turkish capital where Serkan and his wife sell brand-name wholesale clothes.

After meeting the Kosovars, who were participating in a voluntary work program in Turkey, the Sarikavak couple invited all of the Kosovar Albanian visitors to dinner.

At his home, Serkan tried to converse mostly in Albanian. The Albanian part of his identity was visible from the items in his house: The KLA (Kosovo Liberation Army) emblem that was hanging on the wall and the red ‘Prishtina’ scarf. He says that he also listens to Albanian music.

Serkan related the story of his family while showing us the family album that had photos where he was wearing the plis, a traditional Albanian hat. 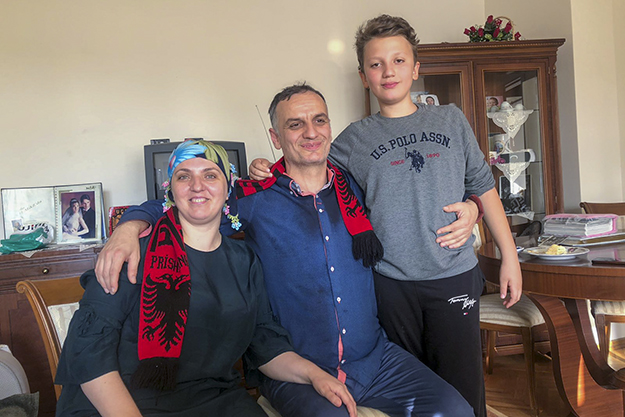 He was born in 1974 in Ankara but his family first came to Turkey long before that. His Albanian ancestors came to Turkey in 1932 — his grandfather was from North Macedonia and his grandmother from Kosovo.

Serkan says his family came to Turkey to escape oppression from Yugoslavian authorities.

He does not remember the surname of his Albanian ancestors but there is an interesting story behind his Turkish surname. Translated into Albanian, Sari-kavak literally means “Yellow Poplar.”

In 1934, as part of Ataturk’s Reforms, Turkey passed the Surname Law. Citizens of Turkey had to change their surnames into Turkish names. Since his family members were quite big in size and had blonde hair, they took the name Sarikavak (Yellow Poplar).

“I made banners that said: ‘We are with you Kosovo.’”

Serkan says that his grandmother nurtured his love for his motherland and taught him the Albanian language. He is trying to pass this love on to his wife Aysegül — who is from Kosovo — and their sons.

Together with Aysegül, they visited North Macedonia and Kosovo after the war in 1999.

“During the Kosovo war, I went on Turkish television and protested against the war,” he says, adding that his Turkish friends also joined the protest. “I made banners that said: ‘We are with you Kosovo.’”

Serkan is concerned that he doesn’t have anyone to speak Albanian with; but he is comforted that his children are interested in Kosovo. “Samir, our youngest, is especially interested,” He says

The words “rrush” (grape), “dardhë” (pear), “pjepër” (melon) and other Albanian words for different fruits are written on a black board. Next to it is the portrait of Ataturk, as Teuta lectures in front of her students.

"The objective of establishing an Albanian language course for housewives was to engage them in social and cultural life."

Teuta studied Albanian literature at the University of Tirana and was an Albanian language teacher in Albania. The 58- year- old left her hometown Berat in 1992 in search of a better life.

Teuta knew that many Albanian women who went to Turkey as children did not have educational opportunities. She decided to establish a course especially for them.

“The objective of establishing an Albanian language course for housewives was to engage them in social and cultural life,” she says. “I believe that by educating mothers we will also teach the Albanian language to their children indirectly.”

The title of her course is “Learning Albanian.” It is supported by the municipality of Bursa. Classes are held in public schools. She currently teaches three classes, two at the A1 level and one at the A2 level, for students aged 13 and older. Her students are currently translating Kadare’s poetry into Turkish.

Teuta and her family lived in a small apartment when she migrated to Bursa. She didn’t know the language and recalls how in the beginning it was very difficult for her. But soon after, she decided to put her knowledge to work in her studies and profession.

“Besides students who come from Albania, Kosovo and Macedonia; I also have Bulgarian, Turkish and Greek students,” says Teuta.

According to her, Albanians in Bursa are an integral part of Turkish society. A few years ago they elected a mayor of Albanian origin.

“In my social circle, I haven’t met any assimilated Albanians,” she says. “They live and preserve Albanian traditions.” 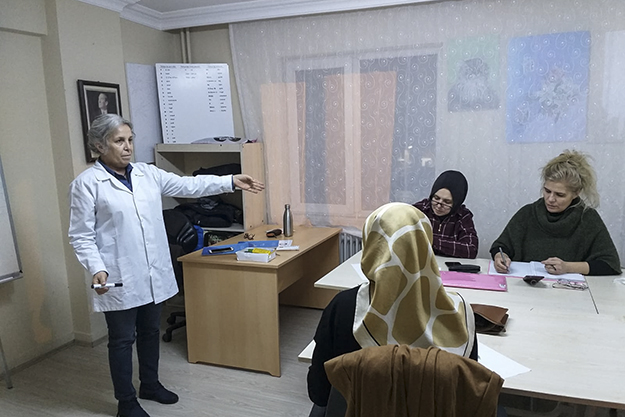 Teuta, who is from Berat, teaches Albanian to many housewives of Albanian origin. Photo: Azize Sönmez / K2.0.

Her mission is to preserve the Albanian language.

“We still have a lot of work to do,” she says. “It is not enough to respect our identity by saying that we are Albanian.”

She plans to open Albanian language courses for children.

For her contributions, Teuta Tabaku was given the title of Ambassador of the Nation. This year, she was also awarded a medal from Kosovo’s Ministry of Diaspora.

In 1958, her family migrated from Kosovo to Turkey. First to Adana and later on to Bursa. Sabrije was only ten years old when they first arrived. But even after more than six decades she recalls her first days in Turkey in great detail.

As a ten -year- old, Sabrije didn’t know the Turkish language, so she did not go to school. But after more than 60 years, in 2018, she heard about an Albanian language course in Bursa. She decided to join although she knew Albanian.

“I wanted to learn the new language, the grammar,” she says. “The language we spoke back then was way different. Now it has progressed.”

Although she has built a life in Turkey, Sabrije still has ties to her hometown, Mitrovica. Recently she obtained a Kosovo passport. In her Turkish documents, her surname is Korkuk. In her Kosovar documents she uses her maiden name, Hajdari. 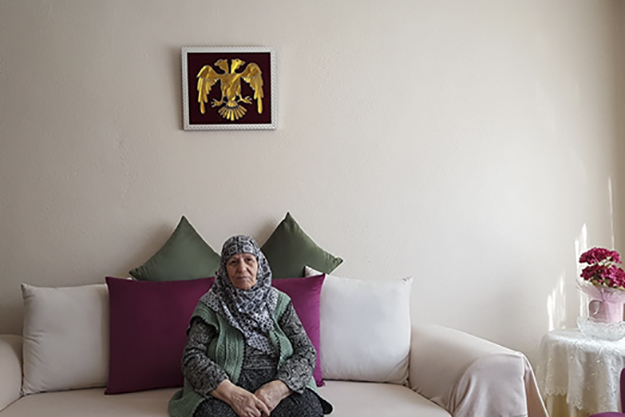 Kadrije Batmaz in the living room, which is decorated with Albanian symbols. Photo: Drenusha Morina / K2.0.

Although she knows the Albanian language she wanted her relatives — who migrated from Skopje when she was 11 -years- old — to learn it too, in addition to Macedonian and Turkish.  When she heard about the Albanian language course in Bursa, she convinced her two sons, her Turkish daughter-in-law and her two nieces to attend.

“They didn’t know a word of Albanian. But when they started it went well for them,” she says.

Kadrije says that she would not leave Turkey to return to North Macedonia or go elsewhere. Her sons’ run a ceramics store located below their house. It is going quite well for them. She says that through this business her sons export products to 14 countries.

However, she has visited Macedonia many times to see her relatives and she has tried to learn the Albanian language. 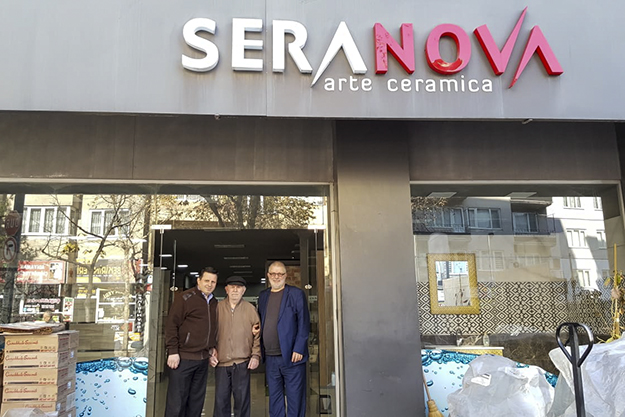 Kadrije’s husband and sons in front of their store. Photo: Drenusha Morina / K2.0.

Azize Sonmez is another student in the Albanian course. She prefers to be referred to by her ancestors’ surname, Daku. Her grandfather, who is from Kosovo, came to Turkey with his six children in 1958.

Azize tells us how her grandfather was deported many times by the authorities in Kosovo back then. In order to secure a better life for his children, at the age of 67, he came to Turkey.

Azize, who is in her twenties, was born and raised in Bursa. But she understands Albanian and speaks it quite well. She can even recite poetry in her mother tongue. She says that she first learned the language from her grandmother.

“She didn’t know a word of Turkish. She raised me. I was with her a lot,” recalls Azize.

In the past, Azize worked as a tailor. Today she wants to work as a translator. This is one of the reasons why she is attending the course.

“I want to improve my grammar and perhaps I’ll also find a job,” she says.

Up until two years ago she visited Kosovo every year.

“It is very interesting. Even though I wasn’t born there that place pulls me like a magnet,” says Azize.K