Living, and dying, with the consequences - Kosovo 2.0
In-depth | Environment

Living, and dying, with the consequences

Cancer rates are soaring in Obiliq, which sits in the shadow of one of Kosovo’s largest polluters.

Dressed in his work uniform, Vesel Mexhuani looks after his garden in the village of Dardhishte in Obiliq. The smoke coming out of the power plant only two kilometers away does not affect this 60-something man much.

Dardhishte, a village with about 1,500 residents, has been a mining zone for underground coal since 1922. In 1962, Energy Corporation of Kosovo (KEK) workers started extracting coal for the production of electric energy. Mexhuani has been working as a machinery manager with KEK for 30 years, but for his family, and for the residents of Obiliq, this means living in one of the most contaminated regions in the country. KEK is the only energy enterprise in the country, and is simultaneously its biggest polluter.

Residents of this region have suffered numerous health problems from the contamination of the soil, water and air. The World Health Organization (WHO) classified air pollution as a carcinogen in October 2013, proving it to be a worldwide environmental problem and public health concern.

The municipality of Obiliq has one of Kosovo’s highest rates of cancer diagnoses. In one decade, Mexhuani says that five members of his family have passed away as a result of cancer, and some of his relatives chose to migrate from Dardhishte to other towns.

Gazmend Zhuri, a pulmonologist, and Iliriana Bajraktari, an internal medicine specialist, conducted research on the link between pollution and cancer that found that Obiliq has the highest rate of cancer patients in a comparison with the regions of Prizren and Prishtina, where Zhuri is a tuberculosis officer for WHO. The parallel between Prishtina and Prizren was drawn because, without presence of heavy industries like mining, the Prizren region is considered to have some of the purest air in Kosovo, unlike the Prishtina region, which is subject to pollution from power plants. 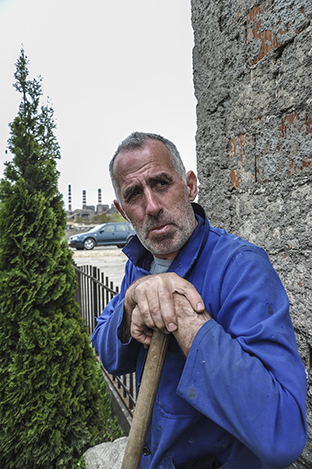 The Maxhuni family live in one of Kosovo’s most contaminated regions. Residents of Obiliq suffer from numerous health problems as a result of polluted soil, water and air. Photo: Atdhe Mulla / K2.0.

In Prishtina, Zhuri said, pollution is far more present than in the Prizren region.

There have been few efforts by KEK to address pollution and reduce the release of ash. In 2013, new electric filters were installed on three units of the Kosovo A power plant, aiming to reduce of the release of ash from 600 mg/Nm³ (milligrams per 1 normal cubic meter) to 50 mg/Nm³. According to KEK officials, 50 mg/Nm³ is the permitted European standard of release of ash.

However, the area called Kodra e Hirit (Ash Hill), which serves as the coal waste landfill near the mine in Dardhishte, continues to cause problems. As part of the goal to adopt a more protective approach toward the environment, KEK has started to replant Ash Hill in order to turn it into a green zone. This plan includes planting 150,000 new seedlings.

But residents there say problems persist. “When the north wind blows, the ashes fill our gardens,” Mexhuani said.

Seven kilometers from Dardhishte, in the village of Mazgit i Ulet in Obiliq, the Podvorica family is having a hard time. F. Podvorica is receiving chemotherapy treatment for lung cancer, which was diagnosed by the Oncology Institute of KCUC. In 2011, his father, Ferat Podvorica, died of lung cancer.

Last year, 18 new cases of cancer were diagnosed and 31 new cases of respiratory system complications were reported at Main Family Medicine Center (MFMC) in Obiliq. This center provides primary health care through family medicine for the approximately 2,500 residents in the municipality.

“These diseases are more present than in other municipalities. During just the first three months of 2015, we have diagnosed seven new cases of cancer,” said the center’s director, Atifete Shulemaja.

According to Ekrem Hyseni, the director of the Oncology Institute at KCUC in Prishtina, that clinic diagnosed 190 new cases of cancer in that same time. “Out of those, 52 were breast cancers, 35 respiratory system cancers, 32 gastrointestinal cancers, 39 urogenital and gynecological cancers and 32 were cancers of other systems,” Hyseni said. 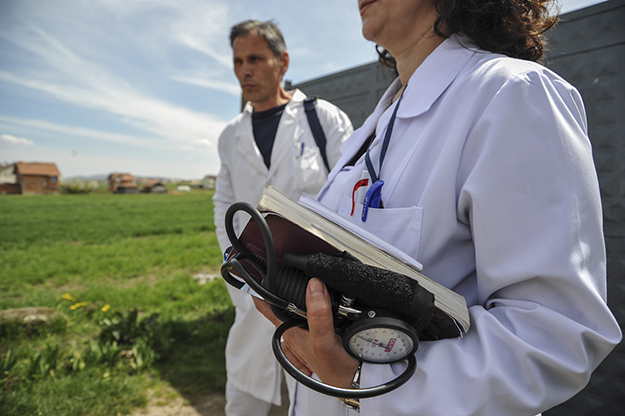 While the Pulmonary Clinic at KCUC does not have comparative statistics on respiratory diseases by municipality, Ilirjana Raça-Bunjaku, director of the clinic, said that most cases there have to do with diseases manifested through the closure of the lower respiratory tract. These diseases, according to Raça-Bunjaku, are characterized by limited air circulation through respiratory channels.

“Limitation of air circulation is progressive and is followed by an inflammatory reaction of the lungs caused by hazardous particles and gases,” she said. “Risk factors are air pollution, environments where we live and work, as well as frequent respiratory infections.” In 2013, 196 patients with these kinds of problems received treatment at the Pulmonary Clinic at KCUC, and that number dropped slightly in 2014 to 188.

According to World Bank, water extracted from the ground, used by almost one-third of the population for drinking, is contaminated.

Pollution from released smoke, though, is not limited to the air; it also spreads into the soil and water.

A 2012 World Bank report on water safety in central Kosovo emphasizes that industrial waste from Kosovo A and B is disposed of in the Iber and Sitnica rivers, which flow through the Obiliq region through many villages and ultimately to Mitrovica. “There is no treatment of collected sewage, including household and industrial sewage,” the report says. According to World Bank, water extracted from the ground, used by almost one-third of the population for drinking, is contaminated. “The contamination of underground water is growing as a result of new construction and the lack of mechanisms to prevent pollution. […] Underground springs are being contaminated progressively. If nothing is done, this trend will decrease the level of water available for human consumption, especially in rural areas, in the future,” the report states. It drew from tests done in 2009 on wells and local springs that discovered that 90 percent of samples were contaminated with nitrates and fecal substances, which, if consumed, directly cause damage and the spread of infections.

Visits done by MFMC in Obiliq schools showed that oral diseases are quite prominent among children compared to other diseases.

“35.75 percent of children had dental problems. In other terms, out of 4,103 children, 1,465 showed evidence of oral health problems,” said Shulemaja, who attributed the problem to water pollution and the consumption of fruits and vegetables grown in an unclean environment.

Hope for the future?

KEK is attempting to improve the situation, although the consequences of the previous operating conditions are evident. During 50 years of work, KEK has used old equipment that caused pollution, but its officials maintain that the protection of the environment and elimination of pollution accumulated in the past are part of the objectives of the corporation.

“KEK has inherited a difficult situation in terms of environment, because of the degradation that occurred in the past, but the investments done so far have proven a great commitment to provide residents with a cleaner environment that is also more healthy for living,” said Edmond Nulleshi, KEK spokesperson. “We are seeing the successful completion of four years’ worth of investments in environmental protection, reaching a sum of over 50 million euros, mainly from own funds.”

The installation of electric filters in all active units of Kosovo A cost 25 million euros, and around 15 million euros went toward a project aimed at cleaning and recultivating lands co-financed by World Bank and Dutch Government. Additionally, about 10 million euros went toward finalizing the hydraulic system for transportation of ash from the Kosovo A power plant. That project’s completion resulted in ending the disposal of fresh ash in former ash landfills of Kosovo A. 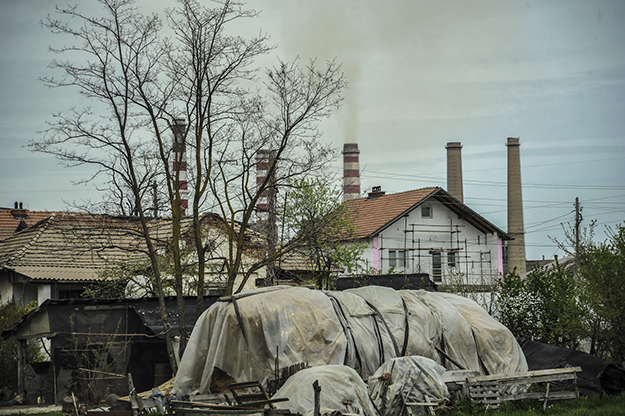 Many of Obiliq’s residents have left the area, in search of a better life elsewhere. Photo: Atdhe Mulla / K2.0.

Through this process, the ash that remains is not sent through transporting tracks to Ash Hill but takes a liquid form, and the environmental pollution is much less significant. During the rehabilitation of the hill, a 1-meter level of soil was distributed over the ash, stabilizing it and planting seedlings above it. The project also covered the destruction of hazardous materials.

Despite these measures, preventable illnesses and pollution are still rampant. It will take continued effort from KEK and other organizations to make Kosovo’s most polluted areas and resources safe for residents.

It is undeniable that people who live close to coal mines or power plants are more prone to respiratory and cardiovascular diseases.

This has happened in the Obiliq region, where coal extraction continues. The number of cases of cancer and other chronic diseases evident in this municipality is the main reason why many Obiliq residents have not hesitated to leave their homes and look for a better life elsewhere.K