A new exhibition tries to keep their memory alive.

March 26, 1999. Almost seventy people from the village of Krushë e Madhe near Rahovec hid in a house. They feared what would come next. When it came their lives were changed forever.

Ferdije Hoti vividly recalled when Slobodan Milošević’s armed forces raided her neighborhood. It was the last time she saw her son and husband before they disappeared into the unknown. Twenty-one years later, she still does not know what happened to her loved ones after they were taken away. She doesn’t know if they were imprisoned or killed, or whether and where their bodies have been buried. The only tangible memory left are two photos that Ferdjie carries with grief and sorrow.

In a newly opened exhibition at the National Library of Kosovo, a portrait of Ferdije Hoti is shown alongside fifteen other people also missing loved ones. The intimate stories and memories of their absent family members are shared in the form of captivating quotes extracted from interviews made in 2014.

In each photo the subjects carry the only remnants they have from their missing ones. For some, it is their son’s carefully preserved shirt. For others their husband's last pack of cigarettes.

When the activist and journalist Dardan Hoti interviewed Ferdije early this year, he had to reconcile his position as her relative, journalist and as an activist. “I froze for a second when Ferdije asked me why I would reopen old sores but then I looked at her for a bit and understood that she was tired … tired of talking when no one seems to be listening, tired of giving answers  while her questions remain unanswered.”

The past still haunts

This fatigue and the urgency to spark discussions led Dardan Hoti and Aurela Kadriu to organize this exhibition. As conceptualized by Kadriu, the photographs are hanging from the ceiling supported only by a thin wire. With this, Kadriu wants to say that the families of the missing have been left hanging with their search for justice kept “up in the air.” 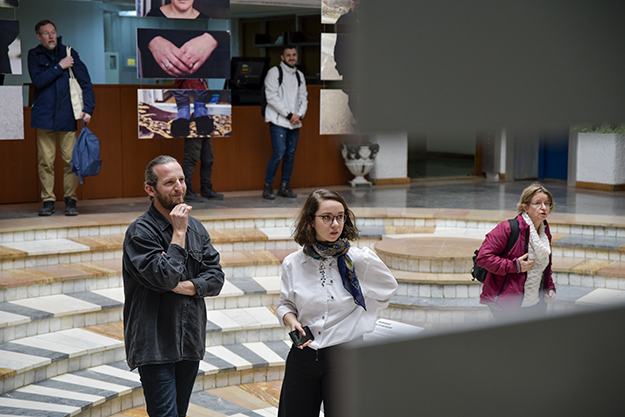 Aurela Kadriu and Dardan Hoti are determined to keep the issue of the missing alive. Photo: Atdhe Mulla / K2.0.

The wires symbolize their unwavering hope to one day find out the truth. The exhibition is not only a remembrance of the past, but also a commentary on how the past continues to shape the everyday lives of war survivors. The photographs are divided into three parts representing the feelings that determine the survivor’s life: Memories, longing and the wandering search for justice and peace of mind.  In each photo the subjects carry the only remnants they have from their missing ones. For some, it is their son’s carefully preserved shirt. For others their husband’s last pack of cigarettes.

Reflecting on this daily reality, Edi Dylhasi, whose father-in-law and husband went missing on March 27, 1999, says: “It would be easier if we only knew the truth from the beginning. Every time mass graves or the fate of missing persons is mentioned, my daughter jumps to the TV. I always have to comfort her.”

According to the ICRC, as of December 2019, 1,646 members from all communities were still missing.

Kadriu says that the families are the real freedom fighters of Kosovo.

“Maybe they haven’t been active soldiers in the war, but the sacrifice that they have made in sharing such intimate stories with the public for a greater cause is a sublime and powerful act of resistance that should be valued more,“ Kadriu says.

The first time Dardan interviewed Ferdije was in 2014, when he initiated the campaign “Dealing with the Forgotten” with Rozafa Kelmendi and Fitim Selimi. The group began documenting the cases themselves in detail with interviews from the remaining family members and survivors.

Publishing a series of interviews in local newspapers, they wanted to provide their testimony as witness to the crimes committed; hopefully pushing the issue higher on the Kosovo-Serbia dialogue’s agenda. However, the families are still left with unresolved questions. “Over the past six years, only one corpse of the sixteen relatives has been found, the other cases remain unsolved but the pain continues to burden their lives,” Dardan Hoti explained. 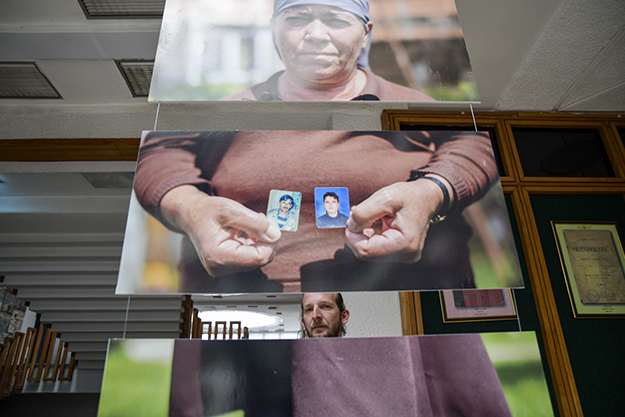 Family members of the missing are also heroes according to Kadriu. Photo: Atdhe Mulla / K2.0.

Twenty-one years after the Kosovo war, the Association of Missing Persons lists 1,647 missing persons. The International Committee of the Red Cross (ICRC) of Kosovo is still the chair of the Working Group on Missing Persons ”urging the authorities in Prishtina and Belgrade to act in line with their commitments and obligations to provide the families with answers on the whereabouts of their missing relatives.” According to the ICRC, as of December 2019, 1,646 members from all communities were still missing.

The European Rule of Law mission (EULEX) is also heavily involved in the search for the missing. According to a statement from EULEX they have conducted, “651 field operations to locate missing persons, including 163 exhumations. The remains of 456 individuals have been identified, including 311 missing persons,” since the beginning of their mandate.

None of the family members were present during the opening of the exhibition. It was too painful for them.

EULEX also assists by supporting the Institute of Forensic Medicine along with the Ministry of Justice and the European Union Office in Kosovo.

Dardan Hoti is convinced that the wounds of relatives can only be healed once the Serbian government apologizes for the war crimes it committed and opens the process for finding the missing bodies. 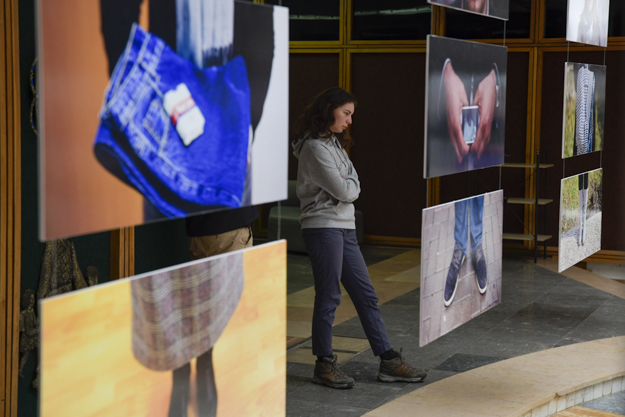 The families find it difficult to move on. Photo: Atdhe Mulla / K2.0.

But he also believes that Kosovar society needs to remain alert so that part of its history does not fall into obscurity. “We are obstructed from finding proof and collecting further documentation, but what we can do in the meantime is use the power of artistic interventions to turn blunt numbers and dates into what they are — personal testimonies and lived realities.”

After six years the interviewees’ lives continue revolving around their lost relatives. Although the pain remains as strong as before, some are falling into lethargy. At times it seems, to the families, as if no one cares anymore.

The participants voiced their gratitude toward the organizers for not forgetting their stories and continuing to fight for justice on their behalf. However, none of the family members were present during the opening of the exhibition. It was too painful for them.

The importance of collective memorials was also highlighted in the opening speech by Mr. Prenk Gjetaj, Head of the Kosovo Government Commission for Missing Persons, who praised the organizers for their involvement and underlined that each little contribution toward research and artistic engagement is valuable to bring the short stories into a sound whole. “In this unresolved situation, our attention and solidarity to these families is the least we can do to make their lives more bearable and build a future with more justice”.

The exhibition was supported by forumZFD, an international non-governmental organization.It is supported by funds from the German Federal Ministry for Economic Cooperation and Development (BMZ).

The public can visit this exhibition until February 29 at the National Library of Kosovo.K