Land of the poor and hungry

More than a quarter of the population in Bosnia and Herzegovina goes to sleep hungry.

Edin Čalo has been selling pencils in the streets and cafes of the capital of Bosnia and Herzegovina for the past 24 years. While he speaks about his job on a winter night in a downtown parking lot, you can see on his face and feel in his speech that he is very tired. He says that he works 14 hours a day — from half past nine to 11 or 12 in the evening. However, he adds with a laugh that: “The people love me, and I love them too.”

He says that he covers up to 100 kilometers during a day, and “more or less” earns between 500 and 600 convertible marks (250-300 euros) a month. He supports an additional six family members with this money, and they all live in an inadequate one room apartment.

When asked about how they survive, he smiles. “For as long as I exist…” He doesn’t complete the sentence, nor would it be fair to ask the only question that instantly comes to mind — what comes next? 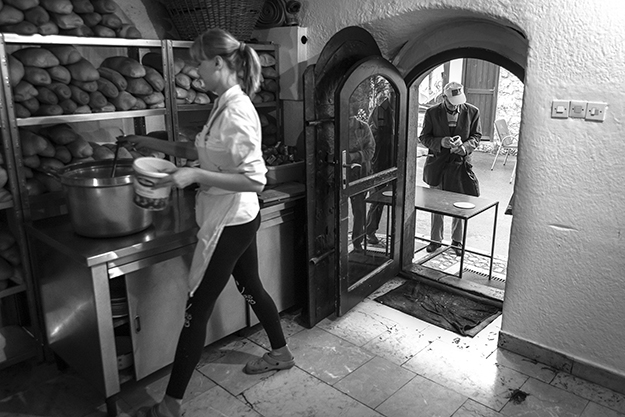 Čalo and his family are only a few among 900,000 citizens of Bosnia and Herzegovina, or 28 percent of the total population, who are considered as living below the absolute limit of poverty. This limit is measured by money required for food consumption, which according to 2016 data, is totalled at 271 convertible marks (around 135 euros) per person per month in Bosnia and Herzegovina.

Further statistical data prove particularly difficult reading. According to UN research, every sixth resident of Bosnia and Herzegovina or 17 percent of the population live on 3-5 convertible marks (1.5 to 2.5 euros) a day, or between 90 and 150 marks (45 and 75 euros) a month, well below the aforementioned absolute limit of poverty.

Hence, 28 percent of the population is not able to afford basic food, whereas 17 percent can barely provide one meal a day. What is especially shocking is the fact that more than a quarter of the population goes to sleep hungry, while those responsible and most of the public keep quiet.

Ranka Ninković-Papić, the director of the Foundation for Social Inclusion in Bosnia and Herzegovina, emphasizes that there is only minor awareness of the fact that real people lie behind these numbers.

“When I talk about these percentages, I always say: ‘Imagine 900,000 people in front of you. They are people. They are children.’ But people aren’t aware about what absolute poverty actually means,” she says, adding that many people do not face this image of Bosnia and Herzegovina. “Maybe they turn their heads from those they see. In [cities such as] Sarajevo, it isn’t that obvious. But, in other parts of Bosnia and Herzegovina, it is very visible.”

What is happening, according to Ninković-Papić, is institutionalized ignorance of the problem, especially by politicians. “Imagine, how could they talk about that next to everything else that is going on — corruption and the rest,” she says. “What situation would that get them in? Can they speak about that at all? Are they interested? No, they aren’t. Do they know anything about it? No, they don’t. Third: Are they even allowed to talk? Who is allowed to speak about this? I would call them ‘Cosa Nostra,’ but those guys at least had a code of behavior.” 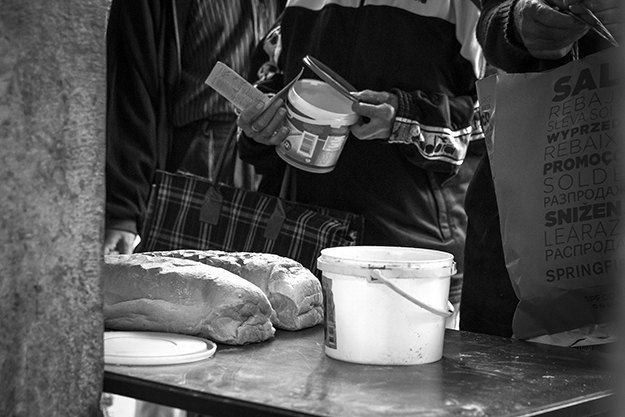 The silence of those responsible and the lack of public attention has left unresolved issues regarding legal provisions, which do not adequately regulate the possibility to help out the hungry.

Hajrudin Solak is an activist with the Pomozi.ba NGO, an organization that deals with the procurement and delivery of aid, mostly in food rations, to persons that are not able to feed themselves and their family. He believes that the law limits the possibilities of the Center for Social Work to direct its resources to where they are needed.

“The legal definition of poverty is in itself questionable. For example, if somebody owns real estate, even if it is in ruins, it is impossible to offer systemic assistance to that person,” he says, adding that everything comes down to the help of “good people.”

A story from Kakanj, a town in central Bosnia where Pomozi.ba’s activists donated school snacks, is a prominent and tragic example of what the organization encounter throughout Bosnia and Herzegovina.

“Many families aren’t able to afford snacks for their children that cost 50 pfennings [25 cents],” Solak told K2.0. “One boy, when he received snacks, saw a cherry pie for the first time. He ate half and brought the other half home, to his sister, who also goes to school. These are examples of situations in which something that we take for granted, others see for the first time.”

When residing in poverty, however, it’s not just hunger that causes issues. Ninković-Papić outlines that the living circumstances of those affected by poverty are far more complex and complicated.

“There are social inequalities and discrimination, with a completely devastated, inefficient, socially unjust and unsustainable system of social protection that isn’t able to provide the minimum social security to the most vulnerable people, and is completely based on status, not on needs,” she says.

According to Ninković-Papić, more than half of those registered in poverty are also socially excluded by other factors, like age, ethnicity or disability. “Within this category, 10 percent are people with disabilities, or 300,000 people. Then there are the unemployed, those with no income, and Roma, women, etc. Primarily, the issue is legalized systemic discrimination.” 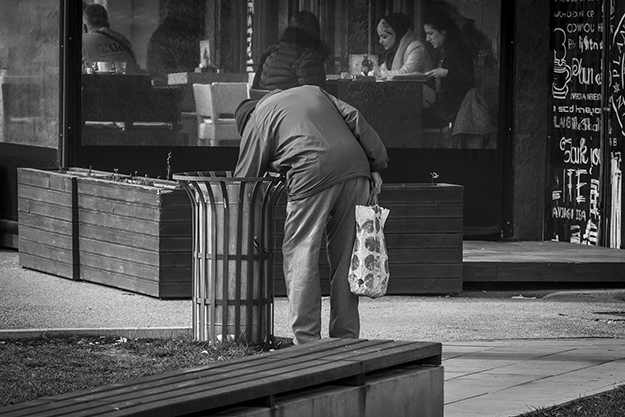 This systemic discrimination, that permeates the whole issue of poverty, is most evident in the example of the Roma population in Bosnia and Herzegovina, that is the most numerous but also the poorest ethnic minority.

Dalibor Tanić, activist and editor of the Roma portal Udar, is a daily witness to numerous examples in which the system is responsible for the situation of Roma men and Roma women. “There is the so-called ‘vicious circle of poverty’ that starts from education,” he says. “Because if you aren’t educated, you can’t find a job, and if you are unemployed, then you don’t have a decent life, nor good health, which leads us to the beginning once again.”

The end result is that Roma men and women in Bosnia and Herzegovina are left at the mercy of their own resourcefulness and reduced to mere survival.

“The work they perform is mostly based in the ‘gray economy,’ collecting secondary raw material and such,” Tanić added. “There are only a few of those with jobs that can secure income for a somewhat decent life. So, here we talk about the poverty of an entire minority, not only one part of it, or percentage.”

This vicious circle is applicable to all those who are poor. Participating in the gray economy or making up jobs such as selling pencils, as Edin Čalo does, is the only thing that separates them from complete hunger, which is where lies the final tragedy for a vast part of Bosnia and Herzegovina’s society. 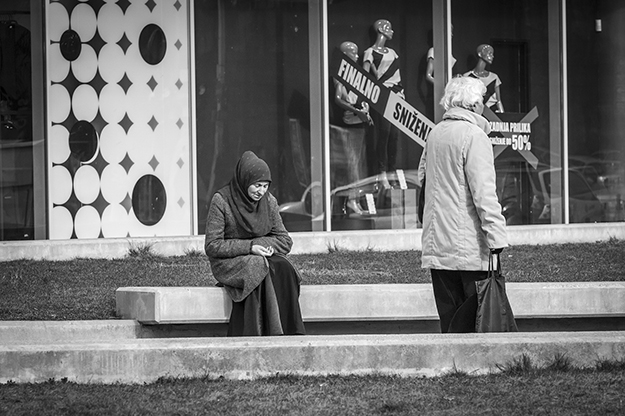 Speaking about the future, the people interviewed by K2.0 all agree that, bearing in mind that statistical trends show a further increase in poverty, the problem will not solve itself.

Solak says that the situation on the ground is completely in accordance with the statistical data and that everything comes down to the goodwill of individuals. “While we wait for legal solutions, we decided to do something in this regard,” he states.

Ninković-Papić believes that the most efficient solution would be to shift the political discourse in Bosnia and Herzegovina. “It is important that politicians stop accentuating conflicts, national interests and production of tensions. Because, you know, and this has been said many times: being a poor Bosniak, a poor Serb, a poor Croat — it is exactly the same.” ‘We are hungry’ in Bosnian, Croatian and Serbian is still graffiti-ed on many walls in Bosnia and Herzegovina, a remnant of the 2014 protests.

In the meantime, it seems as though the entire population of Bosnia and Herzegovina is sitting on a ticking bomb that is threatening to explode sooner or later. Probably sooner rather than later, bearing in mind that higher prices of goods await us in 2018, after the adoption of the Law on Excise that will raise fuel prices by 15 percent.

According to the projections of the Bosnian Council of Ministers’ Directorate for Economic Planning, the consumer price index or CPI is expected to grow by 1.8 percent, which will by itself push even more citizens under the absolute limit of poverty.

While NGOs and analysts expect that in the upcoming period this number will reach over 30 percent, and practically a third of the population will be pushed into hunger, politicians constantly promise further economic growth and development. Indeed, it is a mantra that is also expected to appear in the 2018 elections. The main question is whether society will find a way to reach the necessary changes in discourse or will the bomb explode in the meantime?K