Leaving something beautiful behind

In 2015, Kosovo failed to gain membership to the United Nations Educational, Scientific and Cultural Organization (UNESCO). Nonetheless, at the end of this year the chance to apply will arise again, and, even if it is not this year, another application seems inevitable at some point down the line.

"While UNESCO membership would be welcome, until we are there, Kosovo should still be trying to apply the organization's standards and values."

During the 2015 campaign, Serbia’s government emphasized incidents of unrest, especially in 2004 when a number of Orthodox churches were vandalised, as a strong motive for Kosovo not to be admitted into UNESCO. Admission would not only be a recognition of Kosovo as an independent state, it would also place responsibilities for all cultural heritage sites under its jurisdiction.

Regardless of future applications to join UNESCO, civil society members specializing in the field of cultural heritage have stated that while membership would be welcome, until we are there, Kosovo should still be trying to apply the organization’s standards and values.

With that in mind, K2.0 looks at the attempts made to improve standards of cultural heritage preservation in Kosovo, since its failure to be admitted into UNESCO in 2015.

In its duty to help care for objects of cultural heritage, the government has finally approved the National Strategy for Cultural Heritage for the period 2017-2027, a strategy with three main goals.

Sali Shoshi is the director of the Kosovo office of Cultural Heritage without Borders (CHwB), an NGO which has been active for 15 years, and that is one of the most vocal on cultural heritage matters. Shoshi was also part of the working group that drafted the national strategy.

He criticizes the content of the Strategy as being largely borrowed from similar documents implemented in other countries, and believes it is too ambitious for Kosovo. “My opinion was not taken into account that the document [should] be more simple and applicable,” he tells K2.0. Moreover, Shoshi reveals that the strategy, despite its approval, has not been implemented in the working plan of the Ministry of Culture, Youth and Sport (MCYS) for 2017.

Responding to these concerns, Vjollca Aliu, the head of the Department of Cultural Heritage at MCYS, tells K2.0 that the Ministry is still finalizing the working plan, and is including activities from the strategy. Moreover this strategy has been sent to national and international organizations, enabling whoever wants to help in implementing it.

Legally, little has changed since 2015, cultural heritage is still being legislated over by a 2006 law implemented by the provisional institutions of self-government, before Kosovo declared independence. Two years was spent drafting updates to the Law on Cultural Heritage between 2012 and 2014, but the final results were then unable to be passed into law by the Assembly, due to the six month political blockade after the 2014 elections. At this point, the Ministry decided that the law required further updating, and has formed another working group to make the amendments.

One area in which there has been progress is the Kosovo Council for Cultural Heritage, which finally became functionalized in 2015, after more than three years of stagnation — largely caused by the Kosovo Assembly’s failure to approve board members due to “legal ambiguity.” Now, around 20 cultural assets have been placed on the list for permanent protection, from around 1,500 tangible objects of potential cultural heritage.

However, Shoshi also expresses disappointment with the permanent protection list. Despite their upgrade from being ‘temporarily protected’ to now being permanently protected by law, the assets receive little extra benefit unless the Ministry offers it. “Even if the cultural assets make it there, then what?” Soshi asks. “Nothing happens, they receive neither any extra attention, nor funds.”

An investigation conducted by CHwB found that roughly 140 buildings are near complete destruction, and almost the same number are in a very bad condition. Responding to this claim, Aliu said that institutions working under the authority of the MCYS have seen the state of cultural heritage sites, and have come up with concrete plans for where interventions should or shouldn’t be made.

For this year, the budget for emergent interventions will be 200,000 euros. Aliu stresses that she knows this is not enough. “We continually face priorities above priorities, for which the Ministry lacks funds,” she tells K2.0. But in the end, Aliu says, the responsibility for assessing emergent interventions lies with the institutions of the Ministry. 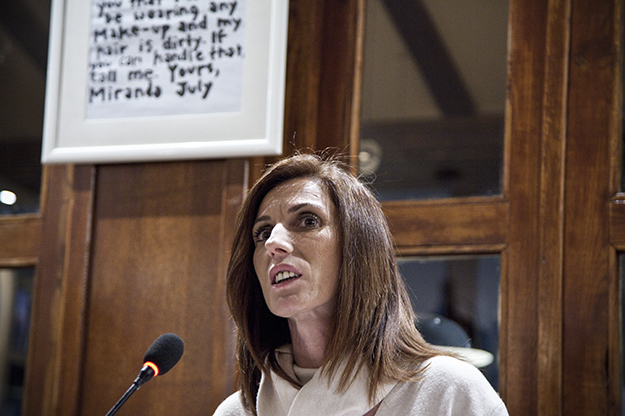 Vjollca Aliu, the head of the department for cultural heritage within the Ministry of Culture, Youth and Sport, describes the department as facing ‘priorities above priorities.’ Photo: Majlinda Hoxha / K2.0.

Shoshi meanwhile insists that the budget is there, but in order to save the at-risk buildings we need “for the budget to be adapted to the needs of the terrain.” Shoshi believes that funds are often prioritized for grander, large-scale projects, whilst the most threatened sites are left underfunded.

The budget for the department of Cultural Heritage within the Ministry will be 5 million euros for 2017, of which, 3 million are for capital investment projects, such as the Novo Brdo Fortress, Ulpiana park, and Prizren Fortress. There will also be a larger focus this year on a new architectural site, the remains of a residential palace and statues in Dersnik, in the municipality of Kline.

Although 10 years later than initially foreseen, the executive decision for forming it was signed last year by the Minister of Culture, Kujtim Shala. So far its creation has been stalled by the Ministry of Finance, who argue that there is no budget for it.

“It’s a technical aspect, but still very important, it’s a matter of budget and we are consulting the Ministry of Finance to see all the possibilities,” says Aliu. The Inspectorate is expected to have 3 inspectors, one chief inspector and an administrative assistant.

Hajrulla Ceku, from the active citizenship NGO, EC Ma Ndryshme, believes that the institution could have been created far more efficiently with more political courage and will from MCYS. “It seems there are powerful business groups who are interested in demolishing and building new business spaces,” argues Ceku, “but also landlords that want to demolish their old houses.”

Regardless of the functionality of the Inspectorate, the Ministry has been criticized as slow to react, or not reacting at all when cultural heritage sites get demolished or destroyed.

Aliu says that whilst it might be true that they do not make their reaction public, she “would not agree that there is no reaction, because we do take measures in accordance with other cultural heritage institutions.” However, she added that they will consider informing the public of their opinions and actions regarding these issues.

Another measure to help protect cultural heritage sites is to start penalization of those who intentionally demolish these buildings. The sanctions foreseen in the 2006 law for cultural heritage vary from monetary fines to physical incarceration.

Another field which lacks attention, is intangible cultural heritage, or as it is translated in Albanian — ‘spiritual cultural heritage.’ During the course of its history, Kosovo has lost a lot of oral traditions and expressions, but still has a diverse intangible cultural heritage to offer the world, such as old songs and lullabies, traditional craftsmanship, musical instruments, rituals, oral lore including tales and anecdotes, a form of dance called ‘Valle,’ and then more recent singers such as Nexhmije Pagarusha, as well as language diversity, festive events, social practices, and performing arts.

‘Lots of work to be done’ is an assessment shared by those working in the field. The Kosovo Oral History Initiative (KOHI) is a project set up by a group of activists, researchers and students, aimed at recording life stories that intersect with Kosovar and world history. KOHI informs K2.0 that in former-Yugoslavia times, in the early days of the University of Prishtina, Kosovo had a generation of academics who were gathering folklore, poetry, folkloric tales, and ‘kreshnik’ songs, that up until then had existed only orally, transmitted from generation to generation.

Today, this tradition of recollecting oral heritage is continued by the Albanological Institution of Prishtina, and independent researchers. Eremire Krasniqi of KOHI says that, currently, the University of Prishtina does little to financially encourage its staff to pursue spiritual heritage research, and even the Albanological Institution has complained that their budget from the Ministry of Education is insufficient, which unfortunately has resulted in a less scientific approach to their research.

Bringing in the municipalities

In the fight to leave something beautiful behind for future generations, responsibilities fall on many actors, including, prominently, local governments. Although some municipalities have drafted local plans for cultural heritage, the majority of them do not have such plans nor any sort of communication with MCYS.

Shoshi argues that the inclusion of municipalities should be the mid-term plan. Each one should have an urban spatial plan, which could include cultural heritage, says Shoshi: “They should make sure that the cultural heritage sites not only continue existing, but that nothing is built around them.” 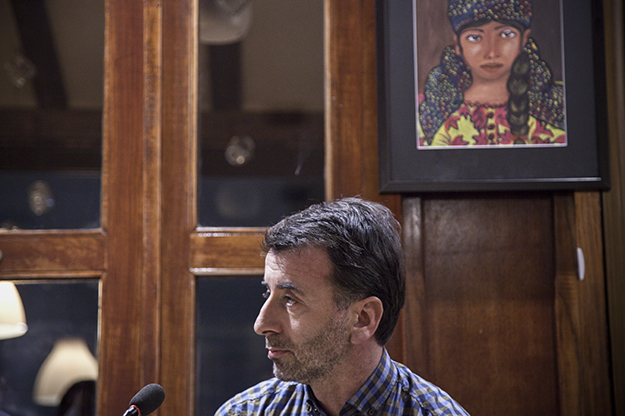 Sali Shoshi, the head of the Cultural Heritage without Borders Kosovo Office, insists that culture should not be a burden. Photo: Majlinda Hoxha / K2.0.

Shoshi advises that afterwards, the Ministry of Environment and Spatial Planning should make a general plan that also incorporates cultural sites. “Culture should not be a burden,” he argues. “But something that brings tourists, creates working places, and solves many of the economic problems we have.”

Aliu would also appreciate some outside help to ease the strain on her department’s budget. “Regrettably, I say that MCYS continues being the main funder of Cultural Heritage activities,” she explains. According to Aliu, only the municipalities of Vushtrri, Gjakove, Fushe-Kosova and Prizren have shown willingness to participate in partially funding some cultural heritage activities.

Shoshi argues that if Kosovo’s neighbors can generate income through cultural heritage, it can too. “We could start using [cultural heritage sites] for tourism, create interpretations, information, guides, and recreational spaces,” he suggests. “Instead of going to Albi, we could send our kids to Ulpiana where they can play, where there are restaurants, coffee.”

The long term plan would be to make Kosovo’s cultural heritage sites self-sufficient. “They would enter our daily life,” says Shoshi. “Right now no one buys culture, because culture has no products.”

To date, with the exception of some Serbian Orthodox Heritage Sites, very few of Kosovo’s cultural heritage sites can generate enough income to be self-sustainable. Shoshi believes that it raises a number of questions: How is the budget distributed? How is the Ministry performing? Are its institutions prepared to do the work? Does it have a working plan? And has someone evaluated this plan? If they can be answered with transparency and competence, he says, then in the future Kosovo could make all of its cultural heritage sites self-sufficient.K