Last Friday (July 7), a new gallery, Kosovo Art Exchange (KAE), opened on the second floor of one of the high rise blocks that line the pedestrianized center of downtown Mitrovica. Its executive director is the award winning American artist Jacqueline Dulin, who has been a member of staff at both the United States Holocaust Memorial Museum, and the North Carolina Museum of Art.

During this time, she noticed that Kosovo’s art scene revolved almost entirely around the capital. “Everybody goes to Prishtina, Prishtina, Prishtina,” she says. “When I see the things on Facebook, when I am reading Kosovo 2.0, there are a lot of exciting things happening there. But it is not here!” 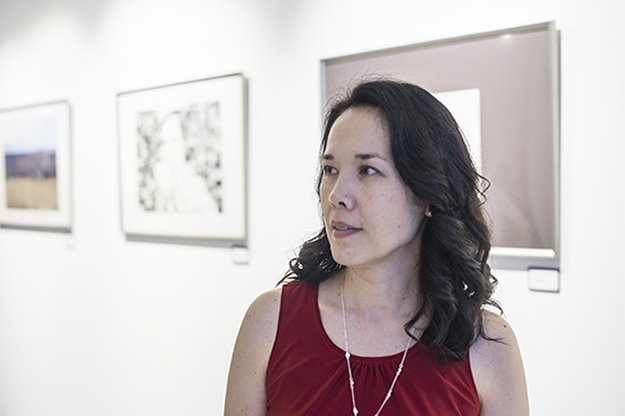 Jacqueline Dulin is proud to show another side of Mitrovica through her new gallery in the heart of the city. Photo: Valmir Mehmetaj / K2.0.

Dulin wanted that art-based excitement to spread northwards as well. “I know this city needs more opportunity,” she says. “And I believe for a culture to grow and move forward they have to have the arts. When you have opportunity, it changes you, it gives you more confidence.”

This focus on the city extends to the first exhibition to grace the gallery, which is called “Mitrovica Matter,” and aims to identify exactly what the city’s artists believe it is made up of, in their words: “The good, the bad, the beautiful, the ugly, the discouraging and inspiring.”

The KAE gallery intends to offer opportunities to everyone, whether they have a Masters degree in painting or no experience whatsoever. Exhibition pieces are selected entirely on their merits as a piece, with judges holding no prior knowledge of who produced the artwork.

For the “Mitrovica Matter” exhibition, the judges were Alban Muja, a well known Kosovo-based visual artist, and John Gordy, a museum worker and established photographer who is an ex-colleague of Dulin. They settled on artworks by four artists: Aneta Hasani, Lulzim Hoti, Shend Stavileci and Arbnora Skuroshi. For Skuroshi and Stavileci, this was their first exhibition. 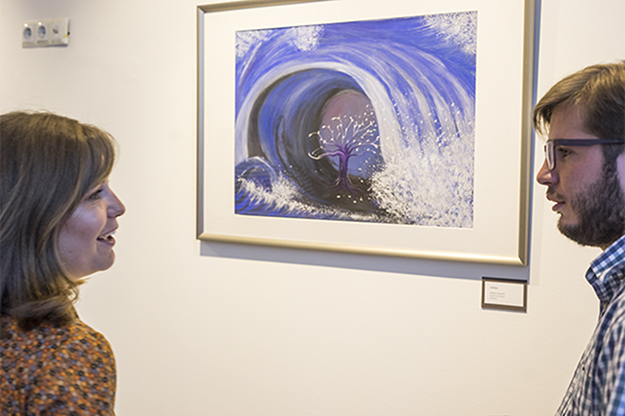 The exhibition gave Arbnora Skuroshi (left) and Shend Stavileci (right) the chance to exhibit their work to the public for the first time. Photo: Valmir Mehmetaj / K2.0.

Through one of her selected works, “Untitled,” Skuroshi explores a quieter corner of the city, as well as the lack of privacy in Kosovo, especially for women, who she feels are rarely free to be alone. “I presented a tree out by the River Ibar, where I often go to paint or read, but I’m never safe,” she says. Above the tree, a huge wave looms large over the sitting girl: “With the wave I wanted to cover myself, to create privacy, so no one can bother me.”

Another of Skuroshi’s paintings, “Ibar,” reflects another aspect of the river — the destruction and damage done to the vegetation on the river banks as the Municipality, together with foreign agencies, attempt to build another bridge, an architectural project aimed at mending the wounds of separation.

While Skuroshi is still experimenting with her painting style, Stavileci has already chosen exactly how to present his ideas and artwork, with marker pens. He has two drawings in the exhibition, both exploring his city of birth. One, “Childhood Memories,” depicts a scene from the social unrest in Mitrovica in 2004, and captures the enclosed feel of the city at the time, the barriers that were all around. 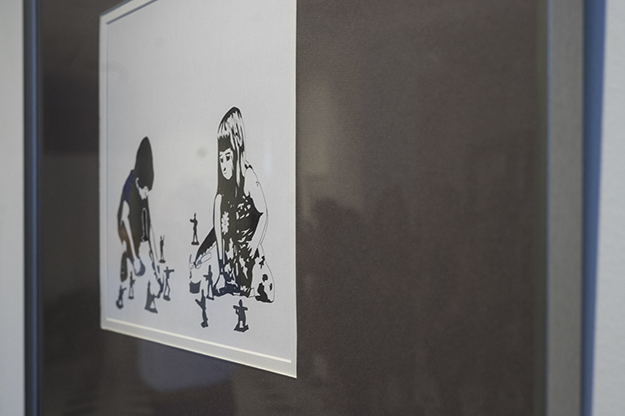 “My generation was around 7 years old and passing by a lot of police, soldiers, thorny bushes,” Stavileci says. “As children we wanted to remove [those barriers], and that’s what I represent in that picture.”

The hard day to day impacts of living in Mitrovica can also be felt in the artistic photographs of Lulzim Hoti, the president of the cultural organization “7 Arte” and long time photography enthusiast. One piece resembles a topographical image, with soil and a field of wheat lying underneath the city. “For me, the wheat is the wealth, the main source of living, but in this case metaphorically,” Hoti says. “The underground of Mitrovica means minerals, which means that not only Mitrovica, but the whole of Kosovo, has as a wheat granary the underground of Mitrovica.”

Aneta Hasani’s work, “The Female in Space” and “The Human Body in Space,” stood out from her fellow exhibitors both in its content and through its unique approach, portraits that incorporate elements of both nude and grotesque portraiture. “I think that the truth is naked, and nakedness is truth,” Hasani says. “The more you cover your work the more you cover lies, fabrications, the more you open your work the more real it is.” 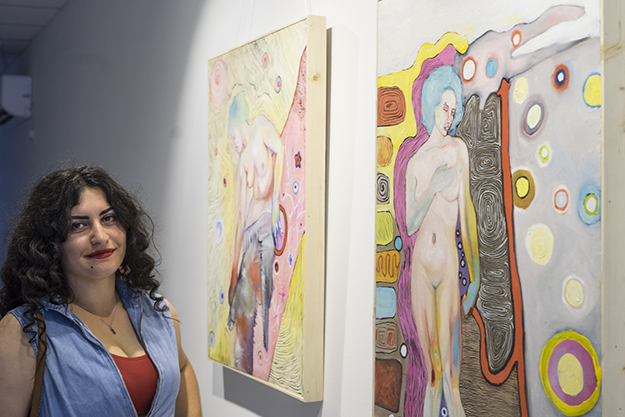 While the nudity is more easily accepted, it is the grotesque elements that Hasani feels can alienate people from her work, but she embraces it wholeheartedly. “I was always attracted to grotesque art,” says Hasani, adding that people’s true nature can be revealed through her pictures. “When you see my works, you will see your reality, your mirror, your truth, and when you see it, you will either be happy, or be sad. A one of a kind mirror.”

It is the display of these less mainstream artworks that Lulzim Hoti, who both exhibited his work at the gallery and has a strong connection to the Mitrovica art scene, is particularly excited about. “Mitrovica needs galleries such as this, that are alternative and not only the existing gallery of the Municipality,” he says. “It gives a chance to the young and the artists to exhibit alternative artworks, and not only pictures.” 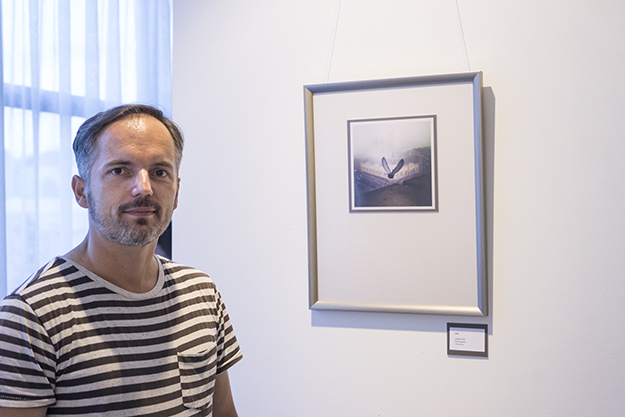 Lulzim Hoti has worked extensively in the Mitrovica art world and believes that it was vital to create a new space for the city. Photo: Valmir Mehmetaj / K2.0.

The KAE gallery hopes to extend beyond pictures and visual art, developing further to incorporate poetry slams, film screenings from DokuFest and other arts events.

In addition to becoming a place for the consumption of culture, the gallery also has other ambitions. They want to be the leading venue for connecting the community to visual artists, and also to become a kind of cultural hub, where you can enjoy fine arts, meet artists, create networks, and of course, a very Kosovar thing, have a coffee, and a very American thing, to enjoy it with an original recipe chocolate chip cookie.

The Mitrovica Matter exhibition runs until August 27. The submission deadline for artworks hoping to appear in the next exhibition, “That Face,” is July 28.