During the ’90s, Teuta watched on in disbelief from her home in Switzerland as newsreels brought daily stories of atrocities being committed during the Bosnian War. By the end of the decade, having followed her husband back to her home country when he joined the Kosovo Liberation Army, she found herself at the center of atrocities herself.

Shortly after arriving in Kosovo with her four children and having given birth to a fifth, she was expelled from her home and lived with other displaced people, moving from one village to another in the mountains. Then one day while part of a crowd of people hiding in a school during an offensive by Serb paramilitaries, she was separated with around 20 other women — one was at least 65 and others were pregnant. They were all dragged against the school wall, undressed, and raped.

Teuta’s horrific story of rape and torture by Serbian forces is one of 10 personal stories shared by survivors of torture in a new memory book. “I Want to Be Heard” was launched at the Orion Conference Center yesterday (Monday, May 15) by human rights and transitional justice NGO Integra and the Kosovo office of international NGO Forum ZFD, which focuses on dealing with the past; the book is part of a project aimed at documenting individual memory narratives of women survivors of wartime torture, focusing on gender based violence. 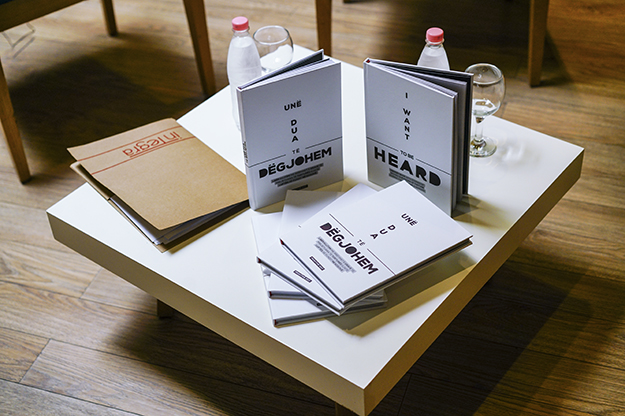 The memory book “I Want to Be Heard,” including 10 personal stories from survivors of sexual violence during the Kosovo war, was launched yesterday. Photo: Jetmir Idrizi.

“‘I Want to Be Heard’ is a book of hope and truth,” project leaders Korab Krasniqi and Kushtrim Koliqi write in the book’s introduction. “To re-live the moment and re-visit the place where someone has been harmed is difficult. Through the lives that survivors are living today, we are reminded of all that remains possible in the wake of the terrible.”

The launch of the memory book was marked with a discussion by guest panelists who have been working with survivors of wartime sexual violence since the Kosovo war. Integra’s Koliqi, who moderated the discussion, said that the purpose was to document a very painful part of Kosovo’s past through primary sources.

“Even if there was just one narration, or five stories, for us it didn’t matter too much,” Koliqi said. “It is important what living witnesses, who besides documenting their pasts, speak also of a very sensitive aspect that still has consequences in society, say about that period in Kosovo.”

He added that there must be a sense of urgency as it has been a long time since the war ended, and witnesses are getting older: “The time is passing fast and memory is very important for a society. In this case all of us working in this field need to hurry up in order to collect these stories,” he said before concluding that Kosovar society isn’t able to create a sustainable peace without first dealing with its painful past.

"Unfortunately because of the stigmatization prevalent in society people haven’t had the opportunity to listen to these stories.”

A video recorded specifically for this event by former-president Atifete Jahjaga was played for the audience. Jahjaga, who has been the most vocal Kosovar politician on the issue, and who established a National Council on Survivors of Sexual Violence During the War, said that confessions in the memory book are “as grave as the fate of these women.”

In 2013, while president, Jahjaga took her car without being accompanied by her security guards, and drove to the region of Drenica in order to meet a survivor of sexual violence in person; this women was amongst the first of many survivors who have shared their stories with the former president.

“The women I met were scared, hopeless and had totally lost interest in life,” Jahjaga said. “During these years I heard hundreds of horrific stories from women, against whom rape was used as a weapon of war.”

She suggested that the new book will make the reader face the reality of this element of the war: “A reality that as a society we have tried to hide and unfairly silence for many years. Unfortunately because of the stigmatization prevalent in society, people haven’t had the opportunity to listen to these stories.” 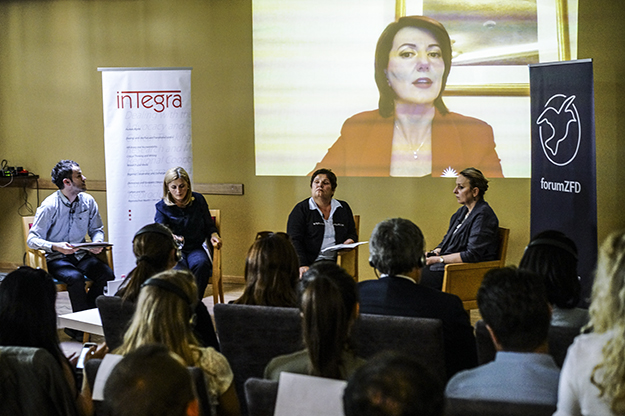 Former president, Atifete Jahjaga, who has been a high profile supporter of wartime sexual violence survivors, delivered a personal message by video at the book launch. Photo: Jetmir Idrizi.

Jahjaga said that the book will give a better picture of the consequences of wartime rape, help to fight the collective stigmatization of survivors of sexual violence and contribute to challenging the culture of impunity.

She concluded that the book comes at a very crucial time for Kosovo, just weeks after the establishment of a government commission that will have the role of recognizing and verifying the status of wartime sexual violence survivors. On April 28, the former Minister of Labour and Social Welfare announced that the selection process for Commission members was complete; after the verification, survivors are expected to receive institutional support, although the allocation of a budget still remains unclear.

Feride Rushiti, executive director of the Kosovo Rehabilitation Center for Torture Victims (KRCT), shared her experience of the war in Kosovo as a student in Tirana, where she met many Kosovar refugees — both women and men — who were traumatized after having been sexually assaulted.

“NGOs have faced direct threats because the community wanted to keep this issue as a taboo.”

As KRCT is one of the key organizations working with survivors of sexual violence, over the years Rushiti has come across many cases of women who have been outcast by their own family and friends.

“The rape would happen in the presence of family members — husbands, brothers, sisters, parents, neighbors and strangers — with the aim of leaving deep wounds in society,” Rushiti said. “And unfortunately some of them aren’t with us anymore. Some of them ended up in tragic deaths. I am glad that at least we managed to finalize some of their narratives, as the number of these women is declining every day.”

Talking about non-acceptance and attempts to silence voices of sexual violence survivors, she said that in the past even NGOs have faced many obstacles, while working on the ground in communities.

“NGOs have faced direct threats because the community wanted to keep this issue as a taboo,” she said. “On many occasions our colleagues on the ground, particularly in the regions of Drenica, Podujeva, Fushe Kosove, but also in Dukagjini, have been driven away by the community, and threatened by different commanders.”

Rushiti explained that survivors of sexual violence generally live in the margins of society, in poverty and facing difficulties when it comes to their physical and mental health, and argued that the dragged out process of recognizing their wartime victim status has worsened their situation.

“Civil society now needs to play an important role in preparing society to support the survivors of sexual violence in order to access the Commission for recognition and documentation of sexual violence,” she said. “Survivors are stigmatized and prejudiced against by society and institutions and we need to work with the community in order to create a new relation with victims and accept them alongside other victims.” 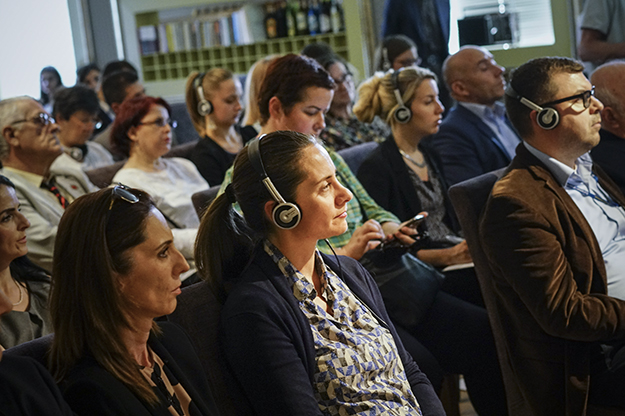 The Serbian version of the book will be promoted at the ‘Miredita, Dobar Dan’ festival in Belgrade at the end of May. Photo: Jetmir Idrizi.

Flora Macula, from U.N. Women, said that survivors of sexual violence had the tendency to talk more openly about their abuses during and immediately after the war. “But then, what is tragic, is that there were many cases of suicide after the war because of family pressure,” she said.

Macula emotionally told the story of a case that had particularly affected her, that of a 13-year-old boy who had been traumatized after being sexually assaulted by Serb forces while being held hostage for a week.

She emphasized that Kosovo had learned from the experiences of some of the main actors from civil society and institutions involved in dealing with survivors of sexual violence in other countries such as Bosnia and Herzegovina, which had helped it not to make the same mistakes in the process of identification and verification of victims.

Further explaining the example of Bosnia and Herzegovina, Rushiti highlighted that the verification process there was humiliating for women, as survivors of sexual violence had to narrate their experiences to all members of the Commision. Furthermore in order to be verified as victims of sexual violence, they were asked to bring two witnesses — Bosnia and Herzegovina recently made amendments to its legislation in order to eliminate such obstacles.

She also explained that unlike with processes in other countries in the region, information obtained during the verification process won’t be passed on to other institutions without consent. “The application will be used just for the verification and identification of [victim] status, contrary to other countries in the region where documents submitted by victims went directly to the state prosecution, with or without their [the victim’s] permission.”

“There hasn’t been any war in which sexual violence didn’t happen because it is a weapon of war and a strategy."

Vjollca Krasniqi, sociology professor at the University of Prishtina and co-leader of the university’s Program for Gender Studies and Research was the last speaker. She talked about the important role that academia can have when it comes to dealing with the issue of wartime sexual violence, suggesting that through research, and in collaboration with women’s rights activists, academics have helped to show that sexual violence is used as a weapon of war and terror.

Krasniqi further argued that rape and physical torture against women and girls is used as a tool aimed at destroying specific cultures and ethnic groups.

“Sexual violence isn’t something new that happened in the wars of former-Yugoslavia,” she said. “There hasn’t been any war in which sexual violence didn’t happen because it is a weapon of war and a strategy. Sexual violence needs to be understood as a product of misogyny.”K

A free hard copy of the book, “I Want to Be Heard” — available in Albanian, Serbian and English — can be obtained from Integra. A digital copy will also be available soon.