What next for sports in Kosovo? - Kosovo 2.0
Lately | Small Talk

What next for sports in Kosovo?

Kosovo sports has long been in a marginalized position, left out in the cold by a lack of international recognitions. But recently things have changed. But over the last two years, acceptance into the International Olympic Committee, and football, handball, and basketball’s international governing bodies have swept the old barriers away.

At Rio last summer, judoka Majlinda Kelmendi gave a glimpse of the bright future that could be ahead for Kosovo sport by winning the country’s first ever Olympic gold medal, and in the process, signalling the start of a new era.

Despite Kosovo’s successful first Olympics, many hurdles still lie ahead. How can Kosovo’s national teams compete with much bigger states? How can funding be best channelled to meet the needs of present athletes and those of the future? What can be done to improve the country’s ailing sporting infrastructure? Kosovo can now play — but how can Kosovo grow through sports? 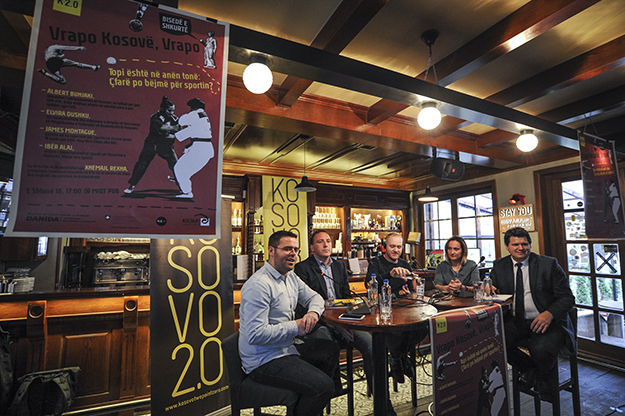 In a lively and interactive discussion with the audience, a wide range of issues were tackled from providing more support to women’s sport to addressing grievances with sporting infrastructure and training facilities. 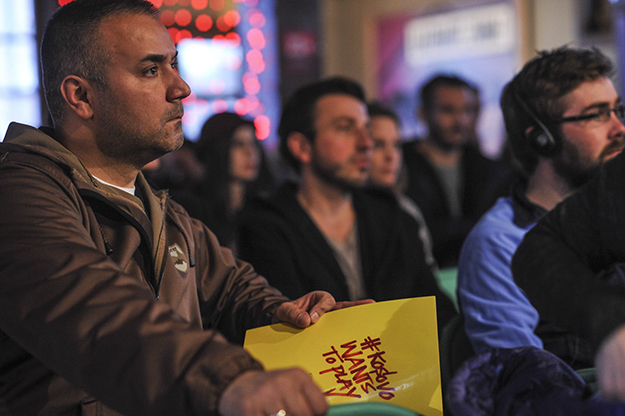 Members of the audience were engaged in the discussion throughout the 90 minute Small Talk. Photo: Atdhe Mulla / K2.0.

Reflecting on where Kosovo is now in terms of sport, Bunjaki, who has been in charge of Kosovo’s men’s football team for almost eight years, said that during the last year Kosovo has started to feel like an international team. “One real step has been made,” he said. “The reality was [previously] not that good, but we must feel positive.”

Former basketball player Dushku agreed that there have been some positive steps in Kosovo, particularly since recognition. She explained that for around a decade there had been a decline in enthusiasm for women’s basketball in Kosovo, but that is now starting to pick up again since recognition by the international basketball federation, FIBA, in 2015. While Kosovo’s teams are having to start right at the bottom of their respective regional league structures, she is hopeful that they can quickly progress through the divisions.

Montague, who has been covering sport in the region for years provided an external perspective, explaining what an incredibly romantic narrative Kosovo’s sporting journey has been in the past couple of years, despite the odds often being stacked against it. Now, he argued, Kosovo needs to get to a point where people aren’t talking about that story, but where Kosovo’s participation in sporting competitions is normalized. 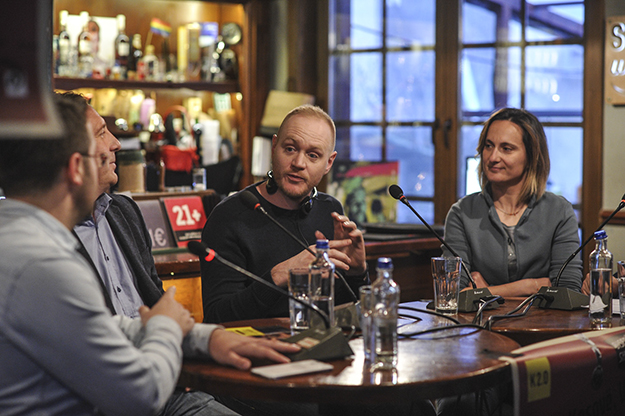 James Montague described the romantic story of progress in Kosovo sport from an outsider’s perspective but said the state now needs to move to a position where sport itself is the story. Photo: Atdhe Mulla / K2.0.

He emphasized how sports and politics intersect and how sport has done more than anything else for Kosovo in terms of state building in recent years. “I think it was [U.S. diplomat Henry] Kissinger that said: ‘To be a country you need an army, a currency and a national soccer team,’” he said. “Unfortunately there is only one of these things now in Kosovo, and it shows you how important it is in nation building. To me it is a fascinating story to see how sport can make a difference.”

Iber Alaj is the head of the Sports department in the Ministry of Culture Youth and Sports. Alaj said that the state has done a lot compared to its budgetary means, through subsidies to sports federations and individuals as well as other forms of funding. Alaj acknowledged that much more needs to be done, particularly following Kosovo’s sporting recognitions and the international standards that it must now adhere to.

One of the topics that prompted most discussion amongst the panellists and audience members was the development of stadiums. With Prishtina’s City Stadium undergoing a makeover to bring it up to FIFA standards, in October Kosovo had to play its first ever competitive ‘home’ game, against Croatia, in Albania. Despite renovations initially being scheduled to be completed in time to host the World Cup qualification match against Turkey this June, that timescale has now slipped.

Alaj argued that there is no need to rush the construction of the stadium; it is much more important to ensure that the stadium will be up to international standards, he said.

Bunjaki agreed that it is better to wait for the stadium to be completed properly than to rush into it and cut corners, but admitted that the lack of a ‘home’ stadium in Kosovo has an impact on the players. “Of course it affects them. It affects them psychologically,” he said. “There is a will of the players to represent the country inside the country.” Bunjaki went on to say that the next challenge after the stadium is complete will be to adjust to the new circumstances of actually playing at home. 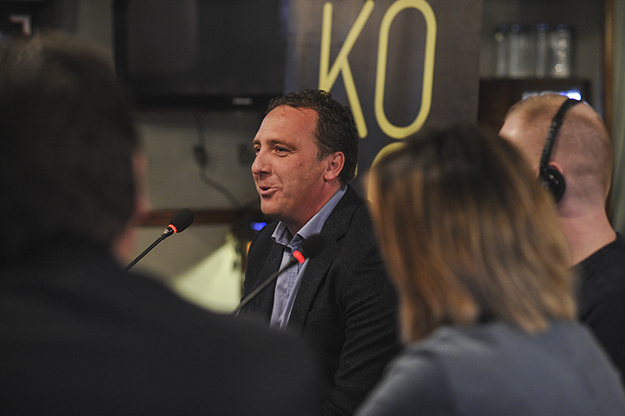 Albert Bunjaki said that Kosovo’s football players were looking forward to playing in the newly renovated stadium in Prishtina, once it is completed. Photo: Atdhe Mulla / K2.0.

Montague and members of the audience tried to pin Alaj down to a firm date when the stadium will be complete, but the government representative was reluctant to be definitive.

Montague argued that the number one priority should be a national football stadium in Kosovo because a stadium is not just a building where players can play a football match — it also symbolizes an incredible achievement in Kosovo’s history. Kosovo might not have the resources in terms of money or a big population, he said, but it is blessed with plenty of natural ability. “The talent is there it is just about taking the next step now,” he argued.

“What Kosovo sport needs now is investment — it needs investment equally for men and women, not proportionately, but equally … If you think about the international prestige that sports give Kosovo, we find it more with the women’s teams than anywhere else.”

Asked whether she felt basketball was adequately supported by the state, Dushku explained that her sport also faces similar issues with infrastructure to football. “Unfortunately, we have problems with the facilities,” she said. 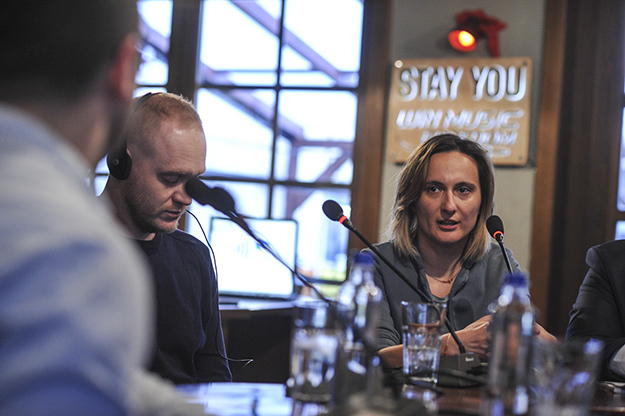 Elvira Dushku explained that more investment is needed in women’s sport, particularly when it comes to ensuring that facilities are fit for purpose. Photo: Atdhe Mulla / K2.0.

She explained the struggles that basketball players currently have to face in Kosovo, especially in the women’s game. Due to a lack of adequate training facilities, teams often have to train in different halls, with non-regulation sized courts and hoops at various heights; these conditions are then completely different to those that they experience in their official games.

Dushku suggested that the state should do more to support athletes and teams with such struggles and to ensure that Kosovo has adequate sporting infrastructure to prepare players for competition.

At this point Alaj interrupted to defend the government’s position. He argued that the government has a specific plan to support women’s sports and that it is investing to bring facilities such as the sports hall in Mitrovica up to FIBA standards.

Montague criticized the pace of progress and said there is no reason why there hasn’t been a monumental effort by Kosovo’s government since the international recognitions to quickly provide adequate facilities for the state’s athletes, highlighting the case of football in particular. “There’s no reason why there isn’t a stadium that is fit for FIFA use straight away, there’s no reason that there shouldn’t be 3G pitches being built at a pace across the country,” he said.

He compared Kosovo’s progress with other countries that he has reported from, which have had to handle much worse conditions than those faced by Kosovo. He gave the example of Palestine, which has managed to establish professional men’s and women’s leagues and build multiple pitches and facilities as well as hosting international matches against teams including Afghanistan and Jordan.

Despite huge obstacles, including the army saying what can be built and where, and getting opposition teams across Israeli checkpoints, Montague pointed out that they have made huge progress. “If it can happen in the West Bank, if it can happen in Gaza, it can sure as hell happen in Kosovo,” he said, to huge applause.

This comparison frustrated Alaj, who highlighted how many boxes Kosovo needs to tick to achieve prescribed international standards.

To conclude the discussion, Bunjaki pointed out that it is not just in physical infrastructure that Kosovo needs to invest, but also by investing in its stars of tomorrow. “Iceland [Kosovo’s next opponents] is a good example — with only 300,000 inhabitants it has a team that has been playing since the age of 9 or something, so these processes are long-term investments that bring results,” he said. “We need to have a long-term project as Kosovo can not always have players coming from Switzerland or Austria … we need to also develop our own players.”

You can watch the discussion in full on our Facebook page, here.