How are Kosovo’s opposition parties shaping up?

After a remarkable year in which two sets of elections shook the landscape of Kosovo politics, 2018 looks set to be another tumultuous year, with the operations of the Specialist Chambers in The Hague and internal conflict inside political parties looking set to add to Kosovo’s mounting political challenges.

With the Kosovo Assembly resuming operations on Monday (Jan. 15), K2.0 examined the country’s political parties to assess where each of them stand going into this crucial year, concluding with the two opposition parties inside the Kosovo Assembly, Vetevendosje and the Democratic League of Kosovo (LDK).

This week (Wednesday, Jan. 10) Albin Kurti was confirmed as the only registered candidate running in the internal election for the leadership of Vetevendosje. However, the candidacy of the party’s founder has caused discontent within Vetevendosje, manifested at the beginning of the year by 11 high profile resignations from internal positions, including Visar Ymeri’s, Vetevendosje’s former president.

In his resignation letter published on Jan. 2, Ymeri stated that a “lynching campaign” had been launched against the former secretary of Vetevendosje, Dardan Molliqaj, who appeared on KTV at the end of December, stating his opposition to Kurti’s candidacy for leadership of the party.

That a split was forming within the party became apparent in early December after a leaked Viber conversation between Vetevendosje’s deputies in which Aida Derguti referred to Kurti as a “shit” appeared in the media. The revelations sparked a fierce battle on social media between party activists. While the discord in the party only became public knowledge late in the year, it became clear that the party had been struggling with the conflict for most of 2017. 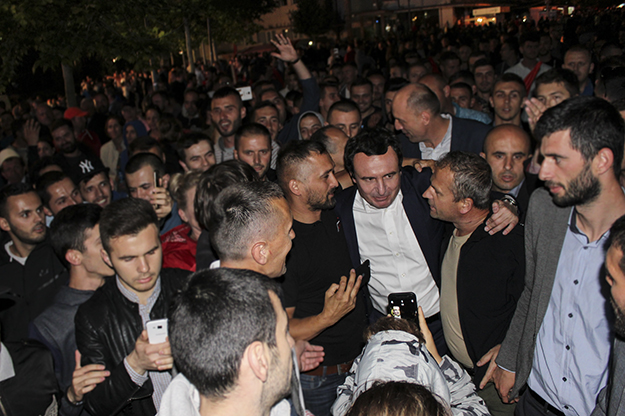 Despite the internal wranglings, it was also a year in which Kurti finished as the most voted candidate in Kosovo with over 140,000 votes as Vetevendosje’s prime ministerial candidate in June’s elections, that also saw Vetevendosje secure the biggest representation in the Kosovo Assembly of any individual political party. Though just over six months since this success, the party’s next four most voted for candidates, Molliqaj, Ymeri, Derguti and Dardan Sejdiu, are all amongst those that have since resigned from their positions.

Vetevendosje also won three mayorships in October’s municipal elections, breaking through in Prizren and Kamenica for the first time. However, this success now also seems slightly tarnished, after the resignation from Vetevendosje’s General Council by Qendron Kastrati, the winning mayor in Kamenica.

Vetevendosje’s increased profile on the political scene has produced consequences that have already become apparent. As divisions have deepened, high profile figures in the party have not ruled out even abandoning the social democratic party altogether. This internal fracture could seriously diminish Vetevendosje’s capacity as an active opposition party in the upcoming year, while any possible split into two wings would undo its newly established strong position within the Kosovo Assembly.

Critics have noted that overcoming these internal battles democratically will be the most serious test of the maturity of the party; Vetevendosje has long proclaimed its internal democracy. However, restoring peace seems a difficult challenge after the magnitude of accusations thrown back and forth in the media.

The way these internal issues will be resolved during 2018 will either legitimize their claim and develop their democratic process, or place them in the same box as other traditional parties that have split in cases of internal disagreements.

Setbacks and comebacks: The Democratic League of Kosovo (LDK)

Vetevendosje having to heal internal divisions creates fertile ground for LDK, who can use this momentum to position themselves as the main opposition party seeking power. One of the party’s key figures, the incumbent mayor of Gjilan, Lutfi Haziri, has indicated that the party are preparing for early elections this year, due to the weakness of the current government.

The possibility that the government will fail to proceed with border demarcation, the Association of Serb Majority Municipalities or the transformation of the Kosovo Security Force into the Kosovo Army, alongside the internal struggles within Vetevendosje ― which can leave LDK to shape the opposition front ― can help LDK in enhancing its reputation with the electorate. The party will be looking to bounce back after a difficult general election campaign last year.

Contrary to Vetevendosje, LDK faced difficult times in the first half of 2017, but closed the year satisfied with the results of local elections. After the collapse of the government led by then prime minister and president of LDK, Isa Mustafa, June’s elections marked the worst election result yet for the oldest democratic political party in Kosovo, as it finished in third place for the first time in its history. 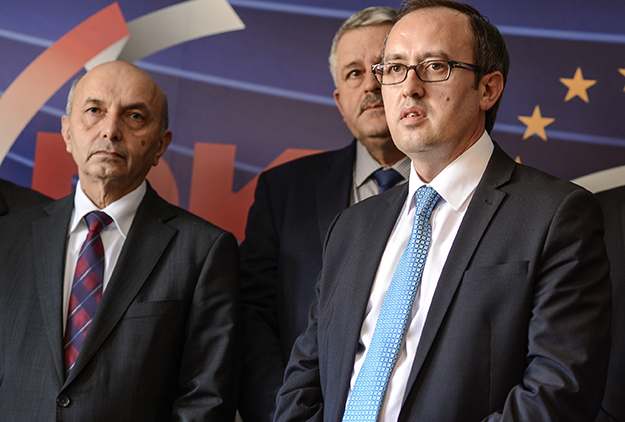 But LDK recuperated from the fiasco of June’s elections and within months managed to consolidate its power in the municipal elections. LDK won mayorships in eight municipalities, outperforming former coalition partners PDK and general election surprise package, Vetevendosje, also coming very close to causing a surprise upset in the run-off mayoral election in Prishtina.

LDK’s reputation will also depend on whether the current leadership will be open to younger politicians, who as individual candidates won some of the most votes in June’s elections but are still not the main decision-makers in the party. Although the current president of LDK was not the party’s candidate for prime minister in June’s elections, Mustafa is still viewed as the person calling the shots.

While newcomers like Lumir Abdixhiku or Driton Selmanaj placed in the top five most voted for candidates in June’s elections, their space for decision-making is reduced within the party. Meanwhile, Vjosa Osmani, an outspoken critic of the party’s actions over the past few years, was the most voted for candidate besides the nomination for prime minister, Avdullah Hoti.

2018 will create an opportunity to begin addressing this issue, as an internal election is expected in spring 2019. LDK’s voters expressed a thirst for change at the ballot box last year; will its old guard be open to discussions about new blood in its leadership?

Externally, the effects of the Specialist Chambers may bring benefits to LDK in 2018, with many key figures from their political rivals being discussed as likely to feature in trials at The Hague. However, popular support for LDK may be threatened depending on public perceptions of the Specialist Chambers, due to the party’s support for its creation.K