“Is this what we’re fighting for in the 21st century?” was one of the many messages used by a few hundred secondary school pupils from Bosnia and Herzegovina (BiH) during protests this week against segregation in schools.

The protests were first launched by students from the Secondary Vocational School in Jajce a year ago, while their peers from other cities joined in on the action on Tuesday (June 20), outside the Travnik cantonal level government offices.

Those who participated in the protest were all educated in schools in which children are separated on the basis of ethnic identity. After a few hours of protesting, the Canton’s minister of education, Katica Cerkez, spoke to the pupils by saying that their demands will be fulfilled, but she rejected their efforts and activism, stating that they are “instruments of the international community.”

“You asked that there are not two schools, and there won’t be. Are you satisfied?” was the ironic question Cerkez directed to the students. 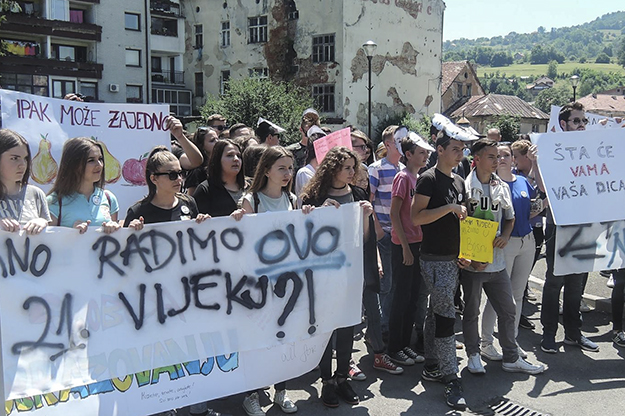 “Is this what we’re fighting for in the 21st century?” pupils asked politicians during the protests in Travnik this week. Photo: Forum ZFD, BiH.

However, she did not manage to discourage the children. After the meeting and protest, they published a declaration, one part of which stated: “We have started the fight against somebody much stronger and richer than us. Still, positive news has emerged. Our battle, efforts, and activism were not in vain. The decision to establish another school was rescinded, and another attempt at segregation has been prevented. If we have found a solution in this situation, it can be transferred to other schools. This is a chance for comprehensive changes.”

This is how a group of children growing up in post-war Bosnia and Herzegovina succeeded — or at least it seems so for now — in defeating the entrenched system that has hung around for over a decade.

Against the law and the people’s will

For more than 10 years in the Federation of BiH — one of two entities formed within the state after the war — a phenomenon has been perpetuated, labelled “two schools under one roof.” In around 50 primary and secondary schools, pupils use separate floors and different parts of the building, segregated on the basis of ethnicity — Bosniaks in one part, Croats in the other. Schools are divided in such a way so that children cannot physically meet each other. Teachers in these schools are also physically separated since they use different rooms.

For years, the public has been protesting against this issue, with protesters mainly made up of people from the academic community. However, last year was the first time that pupils from Jajce opposed it, and succeeded in creating an entire wave of dissatisfaction. Local politicians ignored them at first, but after the pressure exerted by the pupils and all those who supported them, they eventually started justifying their actions by insisting that the system exists because the parents and children support it.

The court also concluded that organizing schools on an ethnic basis, and the physical separation of pupils, was “an obvious example of discrimination.”

To test this, the children in Jajce formed a Pupils’ Council which conducted a questionnaire among teachers, parents, and pupils, asking them whether they really support segregation in education. Most — 59 percent of parents, 51 percent of pupils, and 77 percent of teachers — said they were in favor of a single, unified curriculum.

Two years ago, NGO Vasa Prava (Your Rights), which provides free legal aid, filed a legal case in which they attempted to prove that the existence of this kind of system was unconstitutional. The Supreme Court of the Federation of BiH declared the practice illegal, concluding that “the two schools under one roof phenomenon” represents “an ethnic segregation of pupils” and that “such a practice must be abolished.”

The decision referred to the Elementary School of Stolac and Elementary School of Capljina, in which the curricula were based on the children’s ethnicity. However, considering that such a practice also exists in other parts of the Federation, it is widely accepted that the same decision should be applied everywhere. The court also concluded that organizing schools on an ethnic basis, and the physical separation of pupils, was “an obvious example of discrimination.”

Azra Crnalic is a pupil in the second grade of the secondary school in Jajce and the president of the Pupils’ Council. She used to attend the elementary school in which she never had a chance to make friends with children of other ethnicities.

“Through this type of schooling I was always separated from somebody and didn’t have a chance to meet the others,” she told K2.0 during our visit to Jajce. “When I started attending the first grade of the secondary school, where we weren’t separated, I cannot describe the feeling that I could finally sit with and talk to somebody who you were forbidden to have contact with during the eight-year schooling.” 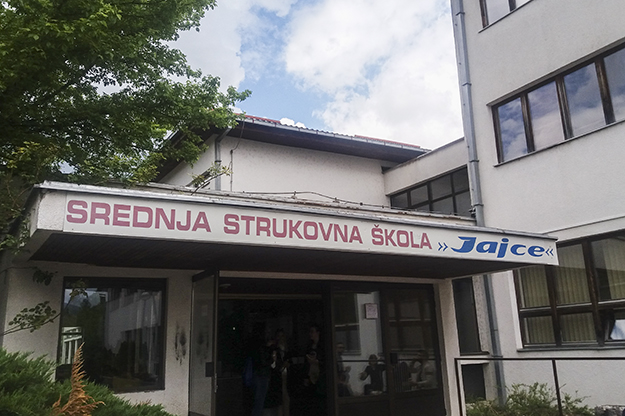 School for rebels in Jajce. Pupils started a movement against the ethnic division in schools that has persisted for more than a decade. Photo: Nidzara Ahmetasevic.

In the same year, cantonal authorities made a decision that children would no longer be able to learn together at secondary level, and decided not only to separate them in the same building, but for that children of different nationalities must attend school in physically separate buildings. “That is when we all realized that we don’t want that,” Azra told K2.0. “We don’t want to be separated, and if we don’t want it, then we can’t understand why they would separate us!”

Kristina I.* was also part of the group of pupils that led this revolt. After a conference organized in mid-April by a group of NGOs who came to Jajce to show their support for the pupils’ cause, she wished to put some questions to local official Edin Hozan, and enlisted K2.0 for help. “Record everything so he can’t say no to me,” she instructed. Her plan worked.

With a slightly trembling voice, Kristina questioned the decisions of those in power, about the two schools under one roof policy, but also about life in Jajce. During the conference, Hozan, a member of the largest Bosniak party, the Party of Democratic Action (SDA) that sought to establish a Bosniak only school, spoke about giving full support to the pupils, but Kristina was not convinced. “Why do you always publicly say that you support the secondary school pupils when you weren’t around?” she asked him.

“Well, I didn’t think that I should walk the streets with children. And I wouldn’t say that I wasn’t around, because I spoke to the children in my office,” he replied. When Kristina asked him whether he was against segregation or whether he has tried to do something about it, Hozan responded that it was all “the outcome of war.”

For Kristina, who was born after the war, these responses were not sufficient but encouraged her to keep up her activism. After a year of protest that generated huge public attention, the pupils this week got their breakthrough, when it was announced that the Bosniak-only school would not be opened, and all the children would stay together.

The decision though was not enough for the pupils, who rallied to protest to demonstrate that they want more — that segregation in all schools in Bosnia and Herzegovina should be abolished.

"The government is planning to spend more than 1 million convertible marks on supplying new schools and financing the new teaching staff to work in the school, which means that we are making an unnecessary double administration."

Prior to the protests, they sent an open letter to officials, in which they state that divisions do not achieve any results and are particularly regressive given the falling number of pupils throughout the education system. “We can’t see any sense that in each class we have [just] five students in the same departments, only with different curricula,” the open letter stated. “In the entirety of the Central Bosnia Canton there has been a 24 percent decline of pupils who enroll in the first grade of secondary schools in the past five years.”

The pupils also pointed out many more problems that seemed self-evident to them: “The government is planning to spend more than 1 million convertible marks (half a million euros) on supplying new schools and financing the new teaching staff to work in the school, which means that we are making an unnecessary double administration. The core needs of secondary school pupils are to attend modernly equipped schools with improved ways of conducting the curriculum. It is necessary to make a curriculum that produces results, where our pupils have quality knowledge passed on to them in order for them to continue their education or to seek a job, where they will be competent to respond to job requirements.” 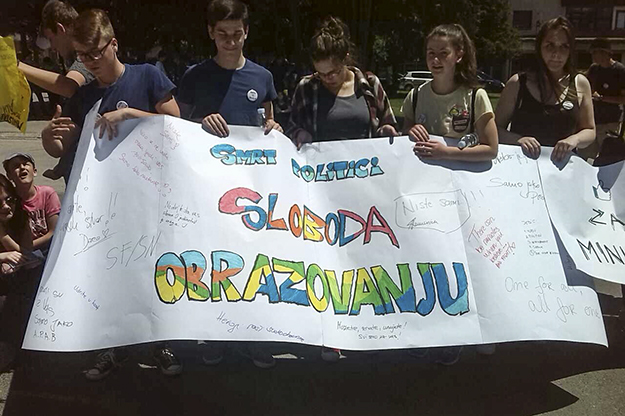 In May, an informal civic group, Nasa Skola (Our School) which included many teachers, demanded that the school in Jajce be declared experimental, with an inclusive curriculum for all. The idea is to transfer the model throughout BiH. So far they have not received any response from the authorities.

The idea of establishing ‘two schools under one roof’ arose more than 10 years ago through international organizations in BiH, which still have significant powers to make decisions and impose laws in the state.

It was intended to incentivise the sense of security for those who fled from the war, and to serve as an incentive for refugees and internally displaced persons to return to their pre-war homes as soon as possible by offering children the chance to attend school in their own language and with their own curriculum. However critics point out that these curricula are actually dictated by national political parties and that this principle has been misused for years by the authorities, serving as a way of sustaining division along ethnic lines.

The original idea was for these schools to exist only for a short period of time, but they have never been replaced. Those who oppose the ‘two schools under one roof’ system, accuse local politicians of trying to keep this system based on ethnic divisions up and running in the hope that it will keep generations divided. But the new generation has showed that they have achieved the opposite effect, and that young people want to live together more than even before.K

*Kristina’s surname has not been published at her request as she did not have parental permission.