Diaspora invests millions in Kosovo but the potential is underutilized.

Enver Haliti urges caution not to slip while climbing the steel steps to the second floor of his small factory in Ferizaj. Below, on the modern factory floor, none of his employees even look up at the strangers walking by, fully concentrating instead on the precision of their jobs.

Haliti decided to return to his hometown from Switzerland in 2010 in order to open Mecatyp KS, specialists in manufacturing bespoke high-tech mechanical parts for robotics, aircraft, and other technology. Initially with four employees and two machines, over the years he has expanded the business to employ 18 people with five state of the art appliances.

With a business model focused exclusively on exports — both to the Swiss market and more lately to Germany — Mecatyp KS is a rarity in Kosovo, where the economy is based heavily on imports. Kosovo has a high trade deficit with exports in 2015 worth only 322.5 million euros, mainly through metals, according to the World Bank’s “Country Program Snapshot,” while the value of imports totalled 2 billion euros.

People such as Haliti are also somewhat of a rarity in themselves; his decision to return and to start a business in his homeland is not one taken by as many members of Kosovo’s diaspora as politicians and economists would hope for. “There is no doubt that in Switzerland I had better opportunities to develop myself but I believe the wish of everyone is to create something in their place of birth and this idea appealed to me,” says Haliti. “I do not regret it but upon balance, in Switzerland I had better opportunities and I would be far more successful than I am today.”

Enver Haliti has faced many barriers since returning from Switzerland to open a business in Kosovo, but he does not regret his decision. Photo: Majlinda Hoxha / K2.0.

Despite little business investment coming from Kosovo’s diaspora, the economic potential from this group is huge. There are estimated to be more than a million members of Kosovo’s diaspora still living outside of Kosovo — particularly in Germany and Switzerland — many of whom emigrated during the 1990s. Between them, they send hundreds of millions of euros back to Kosovo, with Kosovo Central Bank estimating that 752 million euros worth of remittances were sent in 2015 alone; the actual figure is likely to be significantly higher due to the prevalence of cash transfers that do not pass through the banks.

Much of this cash however goes straight into the subsistence of family members, with a 2012 UNDP study finding that 25 percent of households reported reliance on remittances, “a figure that is even higher among households in rural areas and those headed by women.”

Recognizing the economic potential of Kosovo’s diaspora, in 2011 the previous government established the Ministry of Diaspora. The intention was to assist the diaspora culturally and with education, but to crucially also encourage Kosovar entrepreneurs to invest back home. Along these lines, the new Ministry created unions of Kosovar entrepreneurs around Europe, Turkey, the U.S. and Australia that could interact with each other and see the possibility of investing back home.

The impact of this move is hard to gauge. According to the Central Bank of Kosovo, in 2015 Foreign Direct Investments totalled 324 million euros; of this, the vast majority (58 percent) was concentrated in real estate, with the next highest areas, financial services (20 percent) and construction (14 percent), some way behind. This compares with 366 million euros in 2010, the year before the ministry was formed, and 229 million euros in 2012.

How much of these investments came from the diaspora though — and how much from elsewhere — is unrecorded as the Ministry does not distinguish between investments from the diaspora and those from other Foreign Direct Investments. Figures can therefore easily be skewed by major investment projects such as the Kosovo-Albania highway.

“The biggest misfortune is that we do not possess exact data because all Foreign Direct Investments are counted as one but most of them are coming from the diaspora,” says Kushtrim Sheremeti, a senior advisor in the Ministry of Diaspora.

Critics suggest that despite the establishment of a dedicated ministry, Kosovo’s government has continually failed to attract investors coming from the diaspora. For Diellza Gashi, a senior researcher at economic think-tank RIINVEST Institute, the Ministry of Diaspora, besides creating the network of Kosovar entrepreneurs, has done little to produce tangible results.

“From an economic perspective, besides creating the network, the Ministry of Diaspora has only created a mishmash of responsibilities between ministries, because later when benchmarks are not met it is easy to blame other ministries such as the Ministry of Trade and Industry and the Ministry of Economic Development,” says Gashi. 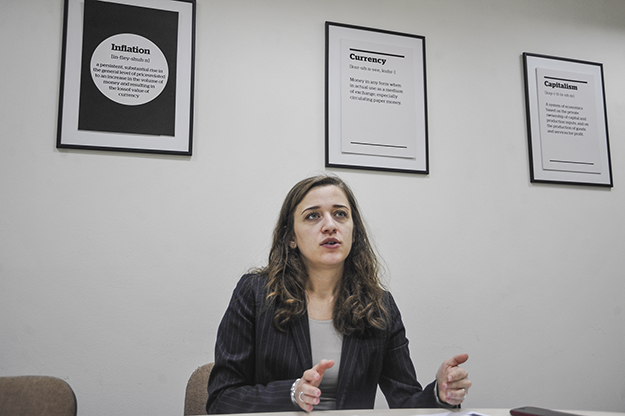 Diellza Gashi from RIINVEST says that the Ministry of Diaspora has produced few tangible results since its establishment in 2011. Photo: Atdhe Mulla / K2.0.

Agron Demi, a policy analyst at political, social and economic research NGO, Institute for Advanced Studies (GAP), goes further by questioning the very raison d’etre of the Ministry of Diaspora. Echoing the position of GAP since July 2014, Demi believes that the ministry should be closed down and its responsibilities distributed amongst other institutions. “To keep connections with the diaspora is a responsibility of the Ministry of Foreign Affairs, while we have suggested that assisting with the education of diaspora members with Albanian programmes should be done by the Ministry of Education,” he says.

Poor coordination between ministries and confusion over responsibilities are far from being the only barriers to diaspora investment in Kosovo. The environment for doing business in Kosovo is a challenging one that makes foreign investors nervous, including those from the diaspora.

Corruption, an uncertain investment climate and weaknesses in implementing the rule of law — with Kosovo having an overloaded and backlogged judicial system that is slow to try cases — have been repeatedly flagged up as areas of concern by Kosovo’s international friends. In its 2012 assessment titled “Kosovo Investment Climate,” the U.S. State Department found that foreign investors are being deterred by “Corruption, practiced and perceived, and a lack of contract enforcement.”

Demi agrees that corruption and lack of legal enforcement are seen as issues that are holding potential investors from the diaspora back. “There have been critics that because of corruption, racketeering, and the lack of rule of law, our diaspora have had problems investing in Kosovo,” he says. “I mention the lack of rule of law, be it from blackmailing, racketeering after the war the usurpation of property that members of the diaspora have invested in, whether real estate or factories — they have faced problems in removing the usurpers.”

Illegal occupation of properties owned by the diaspora is an area that the Ministry of the Diaspora has recognized and attempted to act upon. Sheremeti points to the multifaceted actions taken in 2016 by the government, including the Ministry of Diaspora, in which dozens of properties were returned to their rightful owners and illegal occupiers removed. “We have been extraordinary active with other institutions to create such success stories and promoting such successful stories has started to create a better environment,” he says. 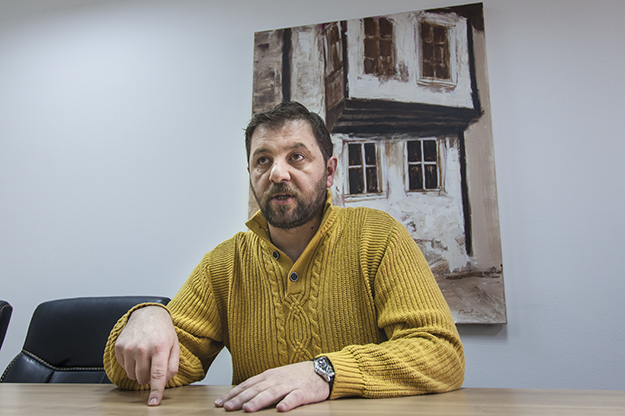 Sheremeti also highlights that last year a special judicial mechanism was established with the aim of prioritizing complaints made by foreign investors, including members of the diaspora. “The special department within the Basic Court of Prishtina will help cases and complaints from our diaspora to be treated by the judicial system and we have already had five or six cases treated as a priority by the court,” he says.

While Haliti says that “Ferizaj is known as a calm city” and that he has not personally experienced any security issues that have required judicial enforcement, he has faced other challenges upon his return to invest in Kosovo.

Largely, these revolve around the basic infrastructure required to effectively do business, although he feels these have improved a lot in recent years and no longer cause him a “headache.” “In 2010, the distribution of energy was far worse and the customs procedures took a lot of time,” he says.

Today, the main barrier Haliti faces is trying to find workers with the required skills to work in his high tech factory. He says it causes him to spend a lot of time and money on training new employees as they are not emerging from the education system with the skills needed for the workplace. “We have inexperienced young people that are not professionally trained,” he says. “Instead of considering young people as an asset, they are becoming a burden for the development of Kosovo.”

This concern is not shared only by Haliti. Demi also identifies a lack of professional schools as a huge problem for Kosovo’s economic development, something that is repeatedly stated in government strategies, but with few tangible steps having been taken to address the issue. Even when steps have been taken towards developing professional schools, he points out that local municipalities have not upheld their end of the bargain.

“The only professional schools that have been opened are part of a Norwegian investment in Skenderaj and Malisheve and they have been dissatisfied with that investment,” Demi says. “They invested [millions of euros] in two professional schools and all the municipalities had to do was to connect the sewers and the water supply — a year passed and the municipalities did not fulfill their obligations.”

Haliti shares the same concern that local governance institutions can add to the uncertainty of doing business in Kosovo, with “ad hoc” decision making and an uncertain political climate. “To make a long term business strategy is difficult as with the changes of political parties in power things can change,” he says. “In the area in which you invested all your money you can remain without basic infrastructure and prospects.”

Other issues for Haliti are more intractable: He points to the extra time and money spent applying for visas and when transporting goods through Serbia, where he says border guards demand excessive paperwork — these issues, he says, make it harder to compete on a level playing field with businesses overseas.

But despite all the barriers he has faced to investing in Kosovo, Haliti has refused to be deterred. He recently opened a second small business in his hometown making metal brackets for the construction industry and he hopes to expand it in the future. It may not be an easy life back in the country of his birth, but it is clear that he has no plans to turn his back on it any time soon.K

This article is a response to reader questions on what is being done for Kosovo’s diaspora during our #IWantToKnow campaign.