Shaping Mitrovica’s future, from the bottom up - Kosovo 2.0
In-depth | Politics

Shaping Mitrovica’s future, from the bottom up

The bridge over the river Ibar, which divides the northern Kosovo city of Mitrovica, was re-opened last month. For so long blockaded and seen as a symbol of ethnic division, now people can technically pass across it freely to the other side, although few are as yet choosing to do so; connecting the two sides of the river will of course take much more than the EU-backed, infrastructure focussed, regeneration project that was launched last October as part of the Prishtina-Belgrade dialogue.

In an attempt to include the local community more in decisions affecting their town, Eliza Hoxha, a former singer, social activist but predominantly an architect, has developed an initiative called Negotiating the City. The first phase, called Facing the River took place last week in the Mitrovica Museum. Invitations to take part were extended to students, experts and activists both in north and south Mitrovica as well to students with an interest in place shaping from the region. 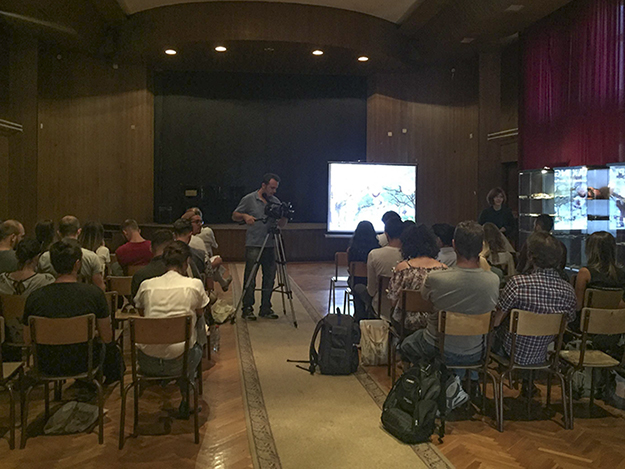 The “Facing the River” program was divided into two sessions. Evening activities included presentations and guest lectures on topics such as ‘Cities on Rivers,’ ‘Divided Cities v Inclusive Cities,’ ‘Placemaking and Branding for Cities on Rivers,’ and ‘Views From the Region,’ as well as a visit to the cultural organization 7 arte for an architecture film night and discussions concerning public space. (You will be able to read interviews and roundups of some of these topics over the coming days on K2.0).

They were given neither the opportunity to give an opinion as to what they want to have at the river, or how they see the river.

During the daytimes, a week-long workshop was held called ‘Visioning the River Ibar in Mitrovica with a community design approach.’ Participants were split into five groups to work in for the week. After carrying out site visits to the river, being advised by their tutors and guests from the community, and conducting interviews with local people, each group drew up designs for the bridge and riverfront areas, which were presented in an exhibition at the museum on Saturday, the last day of the workshop.

Facing the RiverThe whole idea was conceived by Hoxha back in 2009 when she posed the question: ‘How do the communities, both Serbs and Albanians, see their river?’

“I simply thought of what could happen on the riverfront as a communal space, as a space for pacification in the future for the communities,” says Hoxha, “as well for regeneration, development and creating new opportunities for the community in economic terms, as well as socially and culturally.”Holding the belief that the river and the bridge have great capacity from which both communities could profit in all aspects, last year, Hoxha got funding from the European Cultural Foundation to begin implementing the idea she had first had five years previously. 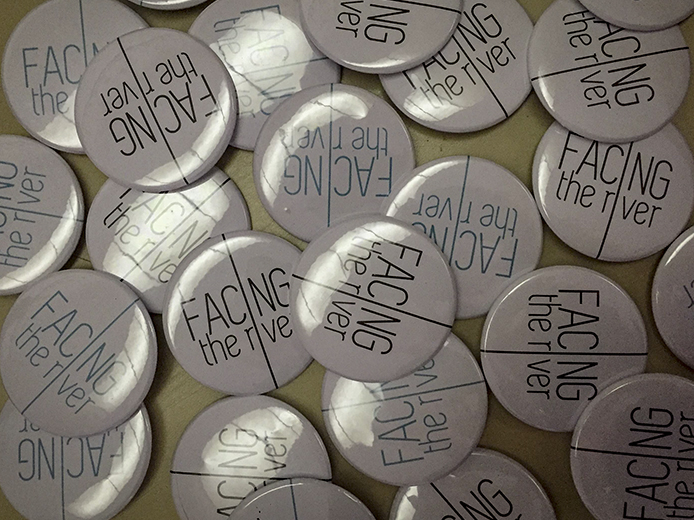 The guiding principle running throughout Negotiating the City is to move beyond the current situation where decisions about Mitrovica — whether resources, designs or the opening and closing of the bridge — are predominantly negotiated in Brussels, or by the municipalities on either side of the river working independently of each other.

“All the while the community has been excluded from these negotiations, and from the processes of decision making,” says Hoxha. “They were given neither the opportunity to give an opinion as to what they want to have at the river, or how they see the river.”

Hoxha’s vision for the initiative was therefore to turn things around, and to start from the bottom up. “If there are so many negotiations about the river and about Mitrovica in so many forms always from the top down, let’s do a project which can open a debate with the youth who are less emotionally burdened, and with urban activists that are in the north and the south of Mitrovica to begin to discuss the river and the prospects it has to offer to the city,” she says. “But to utilize it for the people, to make it a place to be and to meet, there has to be something — a seat, a tree or a road — that goes there and makes it a place.”

Placemaking — working with the community

She decided that the best way of doing this was by using a methodology called ‘placemaking,’ which she encountered while working with the New York urban planner Elena Maddison, a veteran of this approach.

Vice president of the renowned Project for Public Spaces — a non-profit organization dedicated to creating and sustaining public places that build communities — Madison came on board as a tutor at last week’s workshops. “What we are trying to do here is just to show the students and the participants in this workshop, an approach and a methodology that is different from what they are being trained to use in schools,” she says. “It is different from what most traditional municipalities use when they do these kind of interventions.”

She views this Facing the River phase of the initiative as a useful training exercise, suggesting that it was a demonstration of the ‘placemaking’ process; it will ultimately be up to the Mitrovica municipalities to develop their own ideas on how they want to use the river and the spaces around it.

Madison defines the term placemaking as “working with the community,” putting local ideas and expertise right at the center of shaping an area’s future. “Essentially, the most important part of this is that it’s not just about [external] experts coming and making some plans for you,” she says. “It’s really about how people in the community actively engage in both visioning, creating the ideas for the plan and implementing them. The goal of placemaking is to create places that function for people, with the people who are going to use those places.”

It should not be like ‘them’ and ‘us,’ hating each other all the time. We have to move on with baby steps, to live in harmony. We can not get rid of each other, we are here, so let's just make the best out of it.

The ideas generated and envisioned by the community are then designed and projected by architects and urban planners, and in the case of the Facing the River workshop, by the students who attended from around the region. 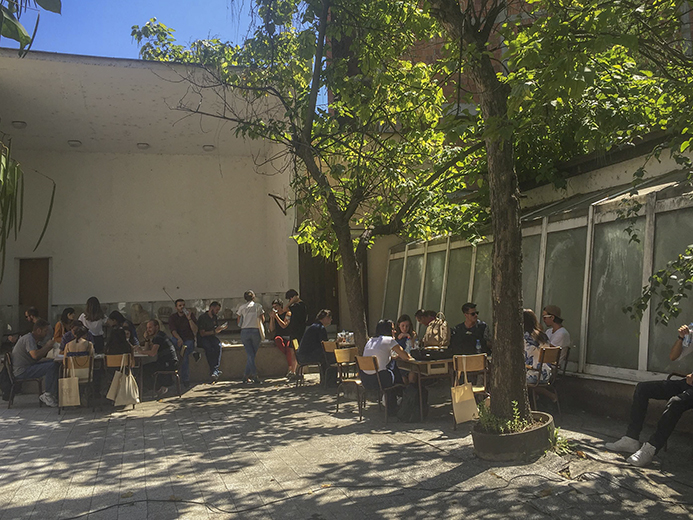 “Aside from including students of architecture and urban design and planning, the initial idea was to also involve representatives of NGOs and representatives of different organizations, be that from the north or the south of the city,” says Facing the River project assistant, Zana Bokshi. With decades of division to overcome and integrated projects still a rarity in Mitrovica, invitations to participate sent to those in the north of the city received a limited response; just three people in the north answered the call, so organizers decided to extend workshop invitations further afield, to students in the wider region.

“We had students from the universities of Polis and Epoka in Albania, students from Macedonia the University of Tetova, and students from Prishtina and Mitrovica,” says Bokshi, who emphasizes the large number of local students from the south of Mitrovica who took up the opportunity to get involved. “Considering that it is their place they know the context better, they are here, and feel the city and experience its history,” she says. “Although they were maybe too young to [remember] how the city was united [in the past], they still know from relatives how the city has been, what it lacks — the city that was once the city of rock and jazz.”

The importance of this event, and the potential that Mitrovica represents, has resonated with many of the workshop participants. Asdren Sela, a student at the University of Polis in Tirana, was born in Prishtina but has lived a large part of his life in America, nurturing a dream and a vision for bringing Serbs and Albanians in Kosovo closer together. “It should not be like ‘them’ and ‘us,’ hating each other all the time,” he says. “We have to move on with baby steps, to live in harmony. We can not get rid of each other, we are here, so let’s just make the best out of it.”

Looking to the future

The first phase of Negotiating the City will be concluded with a book published in Kosovo’s two official languages — Albanian and Serbian — plus English, describing the overall idea of the initiative, the need for it and thinking behind it, as well as the process and methodology of placemaking. The book will also include the voices of those who have taken part so far, explaining why they chose to get involved and the importance of such a movement in Kosovo.

Facing the River will be followed in the Spring by phase two of the initiative; a Divided Cities conference, with the aim of exploring different types of division and the issues that arise from them. “In Mitrovica there is the physical division of the city, and ethnic division of Albanians and Serbs,” says Hoxha. “While in other cities which we consider successful, the divisions are happening because of social status and ethnic belonging. Some divisions that are growing quickly are those of different groups of interests, such as cultural or religious formations.”

In the conference examples will be discussed of how divided cities around the world such as Nicosia, Mostar, Jerusalem and Berlin have engaged and confronted these issues to help soften the differences.

Hoxha says that organizers have been encouraged by the enthusiasm of those who took part last week and hopes it is the start of some momentum for driving Mitrovica forward. “Depending on the results that come out of this activity, we will assess how we want to proceed in the future,” she says. “Maybe … a bigger project which could reflect wider and produce something greater and more substantial for the future of the city.”K