Signs of strain in Kosovo-Turkey relations

Events in Turkey this summer have highlighted that the ‘special relationship’ isn’t all plain sailing.

“We all belong to a common history, common culture, common civilization. We are the people who are brethren of that structure. Do not forget Turkey is Kosovo, and Kosovo is Turkey.” These were the words of Turkish president Recep Tayyip Erdogan in Prizren — home to Kosovo’s largest Turkish community — during an official visit to Kosovo in October 2013.

In recent history, relations between the states of Kosovo and Turkey have been amicable, even close. Not only was Turkey one of the first states to recognize Kosovo’s independence in 2008, but strong economic, cultural and personal ties have forged a somewhat ‘special relationship’ between the two states. With Kosovars struggling with isolation due to widespread and stringent visa restrictions, Turkey has allowed Kosovars to visit visa-free since 2009.

It is also estimated that there are more than 18,000 Turkish people who are citizens of Kosovo. “What makes our relations special is our contact of people to people — that makes [us] so close,” Turkish Ambassador to Kosovo Kivilim Kilic told K2.0. “We have many Kosovars living in Turkey and many mixed marriages not only in Turkey but also in Kosovo.”

Despite the historical closeness, this summer’s internal developments in Turkey unveiled a more complex relationship between Kosovo and its south east European ally. An attempted coup d’etat in Turkey on the night of July 15 led to a state of emergency at home and shifting relations abroad.

In Kosovo, signs of strain manifested themselves unexpectedly following the reaction of a Kosovar journalist to the failed coup. A satirical comment posted by Berat Buzhala on his Facebook page urging all Kosovars holidaying in Turkey “to align” with the putschists against President Erdogan was met with demands by the Turkish ambassador for action to be taken by Kosovo’s authorities. Chief State Prosecutor Aleksander Lumezi quickly dismissed the remarks, stating that he did not see this as an issue for the prosecution.

This summer’s incident with the Kosovar journalist isn’t the first time that Turkey has attempted to influence another country’s media practices. Months before the attempted coup took place, Turkish officials urged Germany to take action against German satirist Jan Bohmermann, who mocked President Erdogan in a poem.

Germany’s chancellor Angela Merkel allowed the prosecution and a month later a German court in Hamburg ruled that the satirist could not repeat parts of the controversial poem. Earlier this month a German court ruled that “no criminal acts could be proven,” thereby closing the case.

However Kilic’s remarks did not go down well in Prishtina, prompting a fiery response from many civil society actors who condemned her reaction as patronizing. Days later, Kosovo’s minister of foreign affairs, Enver Hoxhaj, dismissed Kilic’s statement as an “unacceptable” request, but added that he believed the “misunderstanding” would be overcome.

Nonetheless, Kilic is still adamant that the journalist had bad intentions with his comment whether or not it was meant as satire. “I am the ambassador of Turkey and this coup d’etat happened in Turkey and there are 240 martyrs on that night — more than 2,000 people injured, so it’s not a joke,” she said. “It is a serious thing and this is not a matter [with which] you can make a joke.”

Enver Robelli, a well known columnist for the Kosovar daily Koha Ditore and regular contributor for international media, told K2.0 that the Turkish ambassador miscalculated the response that her remarks would find. “Perhaps from the reaction of our public opinion, the Turkish ambassador understood that Kosovars respect Turkey, but they [Kosovars] are not ready to sacrifice the freedom of press for the vices of Turkish diplomacy,” he said.

Robelli, further thinks that Kilic’s approach to this issue shows something beyond a simple request from an ambassador. “The ambassador’s scandalous demand explains how Turkey sees its political and economic position in Kosovo as so powerful, that it does not hesitate to even deal with ‘reviewing’ the media,” he said.

Turkey’s economic interest in Kosovo is indeed significant. According to the Turkish Ministry of Foreign Affairs, during 2015 Turkey exported over $240 million of goods to Kosovo while Kosovo’s exports to Turkey were worth just $8 million.

In terms of Kosovo’s foreign investors, Turkey is third only behind Germany and the UK and Turkish companies have won tenders for a number of high profile major infrastructure projects in Kosovo in recent years.

Construction of the highway connecting Kosovo with Albania, which is estimated to have cost more than 800 million euros, was completed by Turkish company Enka in consortium with American company Bechtel. Another highway that will link Kosovo with Macedonia is being built by Bechtel-Enka consortium at a cost of 600 million euros. Turkish company Limak-Calik has also won the tender for privatization of the electricity distribution and supply company (KEDS), while Limak, in consortium with Aeroport de Lyon from France, has the contract to manage Prishtina International Airport for 20 years.

While the high level of Turkish investment has naturally been welcomed in some quarters, others consider it a form of so-called neo-Ottomanism — a term that the Turkish ambassador to Kosovo considers “not serious.”

References to Kosovo’s Ottoman past have however been an ongoing point of contention between Prishtina and Ankara. According to Enver Hoxhaj, during a visit to Turkey as Kosovo’s minister of education, his counterpart asked for the portrayal of the Ottomans in school textbooks as ‘ferocious invaders’ to be changed. “During the first official meeting that I had in 2008 in Turkey, the issue of changing historical textbooks and specific content that refers to Kosovo’s and Albania’s Ottoman past … was mentioned,” he told BIRN in 2010.

Besides Ottomans being referred to as ‘occupiers,’ schoolchildren in Kosovo learn that during the Ottoman Empire thousands of patriots and ethnic Albanian teachers were deported or jailed for spreading books and newspapers in support of Albanian independence.

Critics of President Erdogan accuse him of a tendency to try and restore the era of the Ottoman Empire with the modern Republic of Turkey, including forcing the creation of a renewed image for the Ottoman Empire on Kosovo by asking Kosovar authorities to avoid using “inappropriate” terms such as “occupiers.”

In a column for Koha Ditore in August this year, Robelli wrote: “The Turks are proud of their history and that’s their right that should be respected, but Ankara’s politicians should be aware that the vast majority of Albanians in the Balkans cannot be proud of a Turkish history that spits on and neglects Albanian history.” 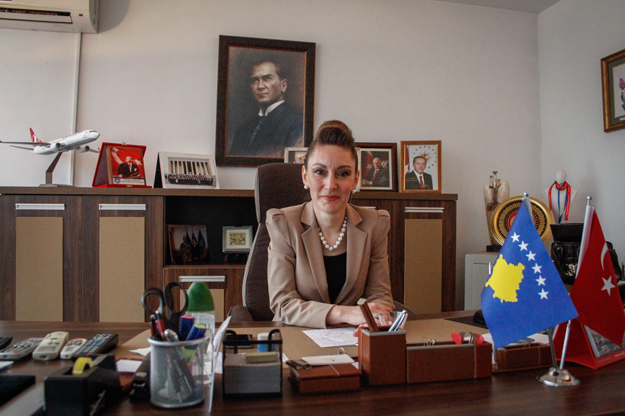 For Kilic, re-writing the textbooks is not an attempt to change history but to sow the seeds of peace for new generations by using words that are as “smart” as possible. “The cooperation is going quite well,” she said. “Textbooks in both countries are being reviewed and it’s going well.”

An area in which Kilic is more guarded is the demands from Ankara to shut down more than 2,000 ‘Gulenist’ schools operating worldwide. The schools — including a handful of primary schools in Kosovo — belong to a network of education and media outlets owned by wealthy Islamic preacher Fetullah Gulen, whose movement has since 2011 been officially labelled by Turkey as the Gulenist Terror Organisation (FETO).

Erdogan has previously applied pressure for Gulenist schools in the region to be closed, notably on a state visit to Albania last year. However with Erdogan accusing Gulen of being behind the attempted putsch, there has been renewed focus on the issue in recent months. In August, Macedonia’s Nikola Poposki said that his country supports the elected government in Ankara and suggested that it was willing to meet Erdogan’s demands. “We will cooperate with the government in Ankara in helping them achieve their goals, of course in accordance to our laws,” he responded, when asked if the government would close schools and organizations in Macedonia that are linked to Gulen.

Inevitably, Kosovo has not been excluded from Ankara’s attempted Gulenist crackdown. In September, Turkish foreign minister Mevlut Cavusoglu hinted that he had exerted pressure on the Kosovo government to shut down the republic’s Gulenist schools: “Discussed terrorist coup attempt, FETO and our deep rooted cooperation,” he tweeted following a meeting with his Kosovar counterpart, Enver Hoxhaj.

Kilic declined to give details about requests to shut down the Kosovar primary schools or on whether pressure was being exerted on Kosovar authorities, but she admitted that it is an issue that is very much on the table. “These are processes and these discussion to find solutions will continue,” she said.

While influencing other countries to close their Gulenist schools relies on Turkey’s bilateral relations, in the aftermath of the attempted coup, Erdogan wasted no time in pursuing those individuals and organizations at home who he deemed as enemies.

Despite continuous pleas from the EU and the U.S. to maintain democratic principles and to commit to freedom of speech and expression, Erdogan’s government undertook a huge retaliation campaign against its opposers. Dozens of media outlets were purged as various television and radio stations, newspapers and publishers — that were claimed to be linked with Gulen — were shut down. Journalists were also arrested despite what Human Rights Watch described as “the absence of any evidence of their role or participation in the violent attempt to overthrow the government.”

“A Turkey with close ties with Russia and strained relations with the West would not be a good partner for Kosovo."

With Kosovo’s path very much set on European integration, its future relations with Turkey could depend on geopolitical developments and on the direction in which Ankara now turns. Warnings that Turkey might extend its three month state of emergency for another year and suggestions by Erdogan that he is considering reinstating the death penalty have caused serious alarm in the West, with the EU warning that the latter would end Turkey’s European integration dream. The Turkish president has also exacerbated delicate relations by suggesting that the West supported the summer’s plotters.

While Erdogan’s domestic response, coupled with his first post-attempted coup state visit being to Moscow, has been interpreted by some as a departure from the European integration path that it has shared with Kosovo for over a decade, Kilic is firm that “the future of Kosovo and Turkey is in the European Union.” Turkey has “multidimensional relations” with other countries, she explained, including Russia, with whom it has a longstanding established relationship.

Robelli nevertheless warns that if Turkey decides to strengthen its ties with Russia and abandon the West, Kosovo needs to be absolutely clear in its foreign policy direction. “A Turkey with close ties with Russia and strained relations with the West would not be a good partner for Kosovo, as the state of Kosovo is vitally dependent on the West,” said Robelli.

Despite Kosovo’s relationship with Turkey appearing to be a little more bumpy than it did before the summer, Kilic is insistent that future bilateral relations are bright. “There are many areas where we should expand on and intensify the cooperation, but we are very happy with the relationship we have in every field,” she stated, emphasizing that Turkey continues to be a staunch supporter of the republic and of Kosovo’s membership in regional and international organizations. “We will [continue to support Kosovo] and we are proud of that. We are proud because I always qualify the relationship as brotherhood.”

K2.0 contacted Kosovo’s Ministry of Foreign Affairs to include its views, but the ministry failed to respond to multiple requests for interview.K