It seems that facemasks have become a new regional fashion statement. On the streets of Prishtina, Skopje, Tetovo and Tuzla, people have donned the masks as a preventative measure against the high levels of pollution. The winter months have brought dangerous levels of pollution back to the Balkans, and citizens are beginning to take their health into their own hands.

This week, Prishtina has seen a protest and an emergency parliamentary session to discuss the issue of pollution in Kosovo. The majority of the air pollution is coming from energy and mining industries, as well as wood and lignite being burnt for household heating. Transport, and landfills of urban and industrial waste all contribute to the problem as well.

As a result, the air has seen huge rises in the presence of particulate matter, especially PM2.5 — matter that has a diameter of 2.5 micrometers or less and is especially harmful to humans, given that once it is inhaled it can enter the bloodstream. A 2013 study showed that for every 10 microgram increase of PM2.5 in the atmosphere, rates of lung cancer increased by 36 percent. 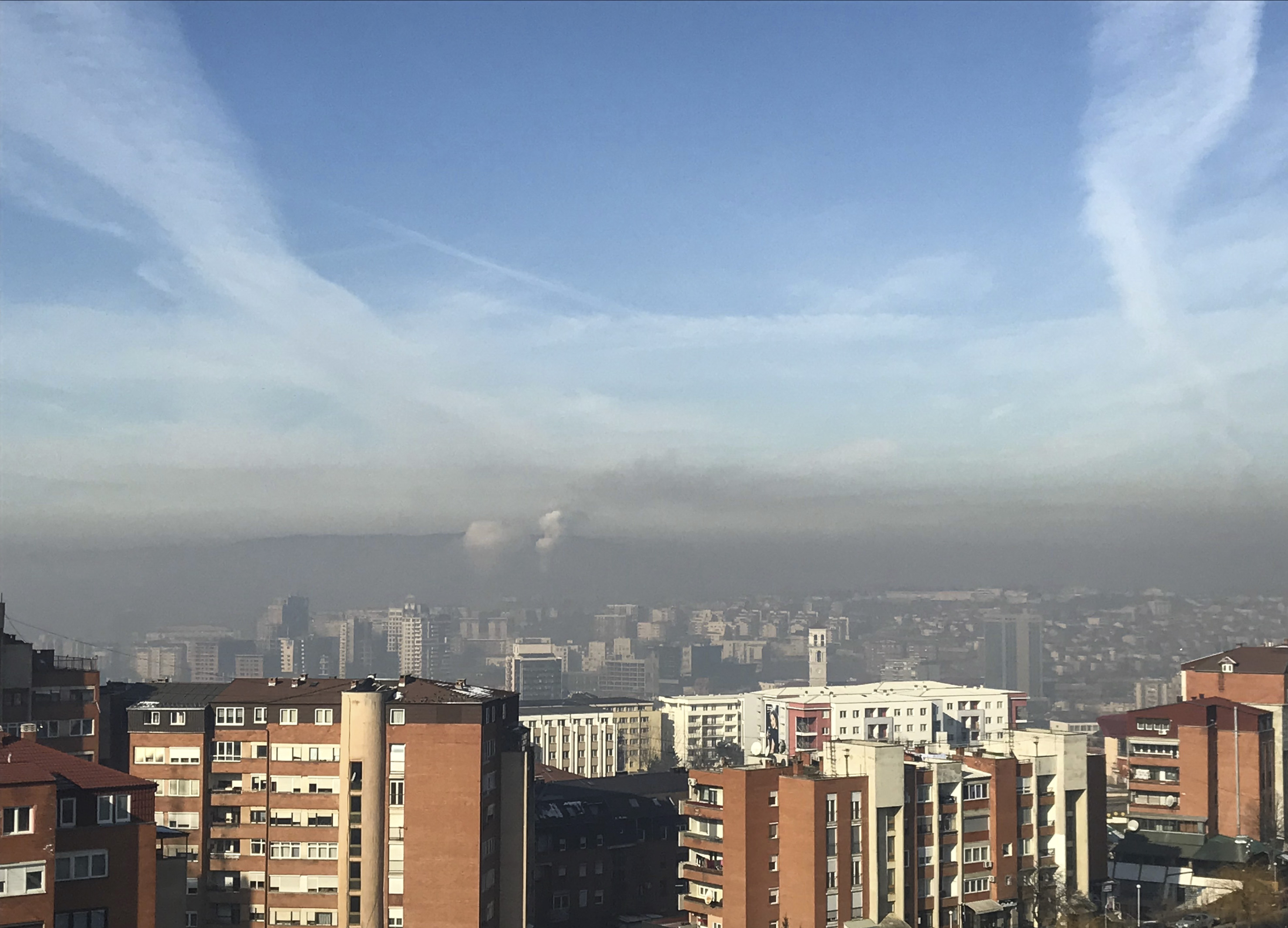 In Prishtina in January, the air above the city was visibly polluted. Photo: Matko Bulent / K2.0.

It’s not just Kosovo that is currently undergoing these issues — air pollution knows no borders. The rest of the countries in the region are also faced with similar pollution problems, including across the border in Macedonia.

Citizens of Skopje, Tetovo and Bitola were forced to breathe polluted air, with levels above the designated limits for PM2.5 concentration for over 15 days in December last year. Last year, Tetovo had the worst air in Europe, with a mean average of 81 micrograms of PM2.5 per cubic meter over the course of the year.

As in Prishtina, citizens are becoming more aware of the disastrous effects of the environment on their health. The Public Health Institute of Macedonia has publicly stated that air pollution contributes to lung cancer, strokes and coronary artery disease, but no definitive measures have been taken. While the same complaints and warnings can be heard year after year, little has been done to address the cause of the air pollution. 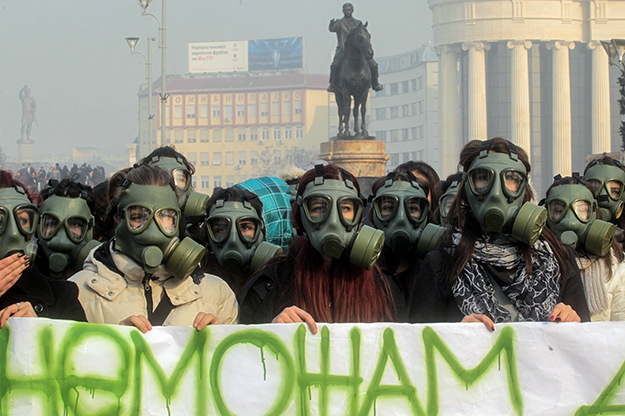 Traffic contributes around 20 per cent to total air pollution but not many people in Skopje, one of the most polluted cities in Europe, use bikes. Photo: Radovan Vujović.

A recent tweet illustrates the rising concerns over air pollution: On a pharmacy store window it is written that anti-pollution face masks were sold out. Masks are becoming such a wardrobe staple, even ambassadors have taken to wearing them.

“There’s a dilemma: either using the car and contributing to pollution or taking the bike and inhaling it. Today I try first time with mask,” tweeted Wouter Plomp, the Dutch Ambassador to Macedonia. The ambassador, coming from a country where cycling is popular, believes that reducing traffic is one of the areas where citizens could help to stop air pollution.

“It can definitely be improved further, but I would like to commend those brave Skopje citizens who use the bicycle as the main means of transport,” ambassador Plomp told K2.0.

“If you see the latest research, traffic contributes to around 20 percent in the overall pollution so this is one of the fields where each of us can make a difference,” the ambassador says. “Everybody needs to take concrete action to decrease pollution — be it biking, waste recycling, or pressuring the responsible people and institutions to make the necessary changes.”

Technology is also empowering citizens with knowledge of the environmental conditions. The Moj vozduh app has shone a new light on the leaks of toxic particles and has increased citizens’ awareness about the air pollution problem in Macedonia.

The red light on the app signals to users that air pollution in a specific municipality is high. As the app’s creator, Gorjan Jovanovski, explains, the highest number of visitors access it during winter months, when air pollution hits dangerous levels.

Jovanovski echoes Ambassador Plomp’s notions that citizens must also take responsibility for issues on air pollution. “For citizens living not just in Macedonia, but also in neighboring countries, comfort is considered to be more important than air quality,” he says. “The reasoning is that buses can’t take them right at their door so it is difficult to sacrifice comfort and use public transport instead of private vehicles to reduce air pollution.” 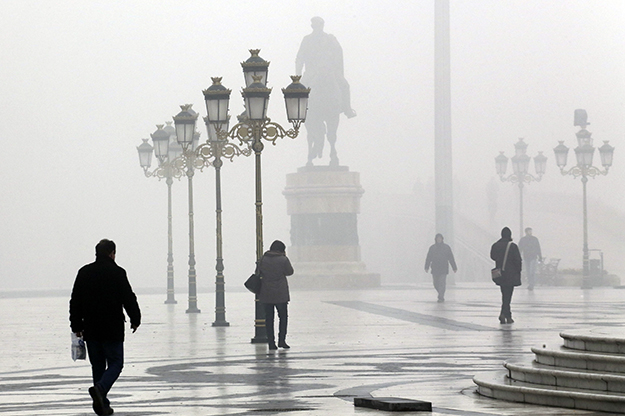 The level of the air pollution sometimes becomes so high that dirty air can be seen. Photo: Radovan Vujović.

However, traffic is just one of the sources of air pollution in the country and encouraging public transportation is a short term measure against the encroaching threat.

The economic activities with the highest PM emissions, according to the World Bank, are ferroalloy production, electricity and heat production, energy combustion in the non-ferrous metals industry, road paving and wood combustion by households, all of which are in common use throughout the region. High-polluting emissions from older vehicles also contribute to air pollution.

“Citizens use firewood for heating, because electricity is expensive. The poorest citizens even burn rubber and plastic waste to keep warm in the cold months,” explains Arianit Xhaferi from the movement Eco Guerilla, which has organized protests and publicity campaigns against air pollution in Tetovo.

Ana Čolović-Lešoska, Executive Director at NGO Eko-svest agrees with Xhaferi that it is difficult to develop citizens’ ecological consciousness.

“When you have poor citizens who can barely pay their electricity bills it is very difficult to stimulate and develop their ecological consciousness. In Skopje we have around 45 percent of households which use firewood for heating,” points out Čolović-Lešoska. Needless to say, this problem has multiple causes and no one answer will solve it.

The new government, elected in May last year, and the recently elected Skopje Mayor Petre Silegov, are wrestling to fulfill their promises to reduce air pollution.

The Government took emergency measures against high air pollution in the capital and in Tetovo a month ago, based on information from measuring stations that air pollution levels stayed above permissible levels for two straight days.

Residents of the cities of Skopje and Tetovo have been granted free travel on trains and buses. Those with chronic illnesses and pregnant women were excused from work while outdoors sports activities were forbidden. Of course, these are only short term measures to curb pollution temporarily.

Čolović-Lešoska thinks that the problem with air pollution cannot be solved ‘overnight.’ “Nothing was done to tackle this problem in the last 10-15 years. The current Government has started more or less to implement the recommendations we suggested,” says Čolović-Lešoska.

One step forward would be increasing inspections to monitor firms which are pumping out emissions. “The only way to tackle the problem with the air pollution caused by industries is having more rigorous inspections,” says Čolović-Lešoska. 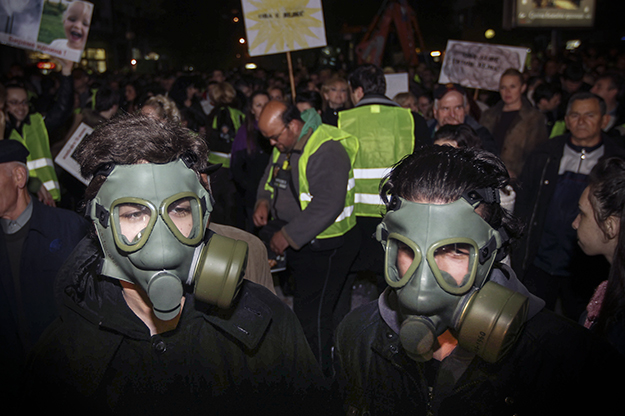 Activists led protests in several cities around Macedonia to demand the government do something about air pollution. Photo:Radovan Vujović.

Xhaferi adds that “measures should be taken to reduce air pollution before we become a nation of anti-pollution masks.”

“Citizens demonstrate awareness when they need to point the finger at someone who is responsible for causing air pollution but show ignorance when they themselves need to take actions to reduce air pollution,” he states.

Air pollution has become a problem across the Balkans. The European Environmental Agency air quality report published in 2017 estimated that exposure to PM2.5 each year kills 18,310 people in Bosnia-Herzegovina, Montenegro, Serbia and Macedonia.

Lignite fired power plants remain necessary to the power grid and detrimental to the health of average citizens. Today, there are 16 of these power plants in the region emitting 13 times more sulfur dioxide and 30 times more PM2.5 per megawatt than the average European plant, according to the latest study.

Just one of the examples is Ugljevik power plant near Tuzla in Bosnia which is a unique case in Europe since it emits as much sulfur dioxide as all of Germany’s plants together. In the short term, the people of the Balkans need access to power but the long term effects are proving disastrous.

Governments in the region have agreed to start reducing emissions of pollutants. It remains to be seen if the pressure being applied to politicians by the citizens of Prishtina will have any long term effect, or if the problem can be dealt with on a sustainable regional level. But for now, many people in Balkan cities will have to wear masks to be able to breathe when outside.K