Storytelling in the post-Yugoslav context

Reflection on the Southeast Europe Future Festival in London.

The identity, community, culture and connectivity of the Southeast European (SEE) cultural and art scene has been sidelined for too long. With this idea, for the second time in a row, Contemporary Balkan Art (CoBA), a collective based in London and of which I am the creative director, recently organized the Southeast Europe Future Festival (SEFF).

Our concept was for the SEFF to be a window to the culture of the SEE region for folks in London. We wanted to create a place that can offer modern, urban regional cultural production for all those who belong to the quite large community composed of people from academia, literature, film, art, and diaspora from the Balkan region in general. Before SEFF, nothing like this existed in London and I believe that this city needed such a festival. 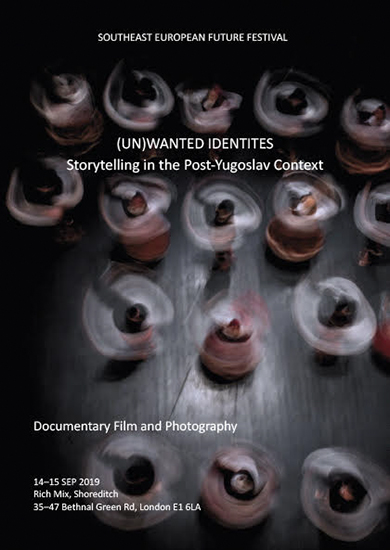 Festival poster. Courtesy of the SEFF.

Initially, we decided to focus on one central subject every year, and in that manner direct the themes and feelings of the entire program.

Last year, it was all about heritage and architecture. This year, my idea was to talk about women’s lives, their art, photography and films, but also to include intimate personal stories about Yugoslavia and our own ideas of what that country took from us, and what it gave us in return.

From August 29 to September 15, we hosted a number of people from the region, providing them with a platform to showcase their work in London, but also to talk about feminism, communism, art and, unavoidably, Yugoslavia and what remains of it.

The films we showed during the festival had one thing in common: remarkable intimacy, in terms of family history or gender identity, as family can be central to storytelling in the post-Yugoslav context.

A good example is Croatian filmmaker Marija Ratković Vidaković’s “IKEA for YU.” The film charts her journey from growing up in a pro-Yugoslav family, dominated by a mother who finishes your sentences, to being a mother herself in Sweden, free from the Yugoslav burden. A journey taken by many people from the region after leaving home for various reasons.

Throughout the panel discussion, die-hard Yugoslav communist grandparents were a recurrent theme.

This intimate family film was like a base for the panel discussion, which we titled “What is Yugoslavia to You?”

The question was posed not in the sense of grand historical narratives, but rather in a personal sense, asking what Yugoslavia meant for one family. We asked this while bearing in mind that for so many of us, knowledge of this country came from our parents rather than through personal experience, since so many of us who took part in the festival were too young to remember the country we were born in, or where our parents come from.

Olivia Suđić, who is writing a novel about a Balkan refugee woman living in London, said that she got insights from her grandparents who mythologize Yugoslavia. However, this UK fiction writer lives in a time that reminds her of the dissolution of Yugoslavia, especially in the emotional sense, with Brexit and the separation of the UK from the EU.

Throughout the panel discussion, die-hard Yugoslav communist grandparents were a recurrent theme. Some participants, like historian Vladimir Unkovski-Korica from Glasgow University, recounted interesting personal stories. For him, Yugoslavia became a tiresome topic. To escape it, he moved all the way to Zanzibar. But there, he began to obsessively reflect on the topic, to the point that it was a significant part of why he became a historian.

A different question that the panel explored was the different layers of identity. Vesna Goldsworthy, professor at Exeter University, explained that she considers herself simultaneously Serbian and Yugoslav, as well as British. During family dinners, there were always different family characters with conflicting political understandings, so she always simultaneously has at least two different opinions in her head.

My idea was to create some kind of balance in the portrayal of our past and to confront the surviving fear and silence.

In the part of the program dedicated to the lives and stories of women, a different topic was broached. We decided to invite three women filmmakers and featured their work. Through their films, we aimed to tackle the stories of the generations who are living in the post-Yugoslav space.

One of them was “Naked Island,” a film by Tiha K. Gudac. The director investigates her family photos and walks the viewer through the intimate testimonies of Yugoslav political prisoners at Goli Otok, the prison island also known as the “island of broken souls.” Through the film, she examines the consequences that this trauma had on three generations.

When I decided to invite her and show this film, my idea was to create some kind of balance in the portrayal of our past and to confront the surviving fear and silence.

The other films were about more contemporary topics.

“Occupied Cinema” by Senka Domanović, a film about the guerrilla action of young activists taking over the privatized Zvezda cinema in Belgrade, sheds light on the existing left wing politics in Serbia. “Born Just Now” by Robert Adanto offers an intimate look at Belgrade-based artist Marta Jovanović and the female performance scene in Belgrade.

We also screened North Macedonian Oscar nominee “Honeyland,” a cinematic marvel. This documentary tells the story of an old woman who cultivates honey in the ancient way in the mountains of North Macedonia, with the spirit of revenge and death.

Finally, “Nebeska Tema” by Mladen Matičević took us to a different place in our memories. It recounts the story of Yugoslav “new wave” star Vlada Divljan, whose lyrics honored his adoring muses, in sharp contrast to stereotypical Balkan patriarchal sexism.

The main exhibition at the festival this year was titled “Perspectives: Photography Storytelling” and was focused on the work of 15 women photographers from six different countries (Slovenia, Croatia, Bosnia, Serbia, Romania and Bulgaria). 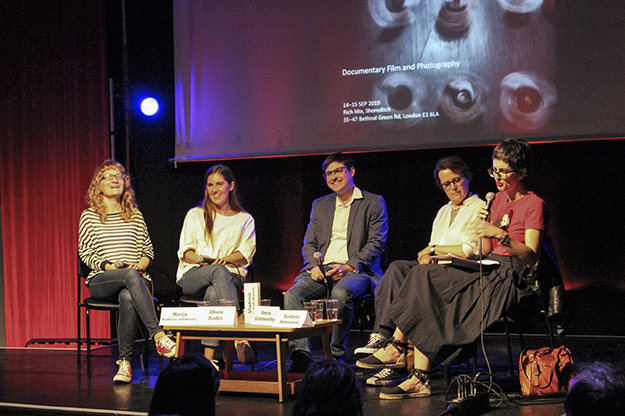 One of the panels of the SEFF tried to answer the question: “What is Yugoslavia today?” for all of us, those who do and those who do not remember it. Photo courtesy of the SEFF.

The exhibition tells a collection of very different stories, treating topics ranging from gender, feminism and sexuality to communist grandmothers, rural lives as well as marginalized people, such as refugees and the LGBT community.

The photographs were selected around themes of identity and human vulnerability, such as the exhibition by Marija Janković, whose photos tell the first hand lived experience of a patient in a gynecological department in a hospital in the Balkans.

A very different approach and focus is the one of Imrana Kapetanović, a Sarajevo-based photographer whose grandmother was a Partisan and a member of the communist youth organization SKOJ. Imrana documented her life in her documentary photo project “Skojevka Minka,” exploring the character of her grandmother who refuses to give up her adoration of Tito.

What I have seen and heard at this festival amounts to a new and refreshing take on post-Yugoslav identities, which will add to my own new research into Serbian cultural scripts and modes of behavior in comparison to the British way of life. My ultimate aim is to ask the question, why and how are we Balkanites different?

Feature image: Courtesy of the SEFF.