In the past few weeks, citizens of Albania have been shocked by videos and pictures on social media showing extreme cruelty against animals. These images have not only provoked public debates on the topic, but have made civil society and animal rights organizations react with demands for the government to change existing legislation and to introduce measures against those responsible for animal cruelty.

The first case that shook the public occurred on October 1, when a group of locals in Diber, a town in north eastern Albania, killed a bear. The photo of the dead animal was shared all over social media and provoked many angry reactions from people who were upset with the murder of an animal that is considered an endangered species.

The locals justified this act by saying that the bear had destroyed their corn plants and had caused a significant disturbance. “This bear was killed in Kala e Dodes village because it destroyed all of our plants. It took our basic food,” a local resident wrote to a Tirana-based media organization.

Bears in Albania, a branch of the Animal Rescue Albania group that protects animal rights, responded by stating that villagers had potentially destroyed the bear’s habitat, provoking it to show up in the village. “The loss of habitat, caused by deforestation, forced the animal to search for food elsewhere and ultimately to feed on the crops cultivated by locals,” they underlined on their Facebook page.

Just two days later, a video of a brutal murder by a teenager of his pet dog went viral online, causing widespread outrage and condemnation from social media users. The unnamed dog, later dubbed “Bardhoshi” (meaning “the White Dog” in Albanian), is seen getting excited as the boy approaches, thinking that he is there to play with him. But this quickly turns to yelps and screaming as the chained dog is beaten before being killed with an axe.

Police identified the teenager as a 14-year-old from Kucova, a town in central Albania and said that the video was filmed and posted on Facebook by two of his peers. Speaking to Top Channel, the 14-year-old said that he regretted committing this brutal act but didn’t imagine that the footage of his violence would be spread across the internet and would later cause him problems. 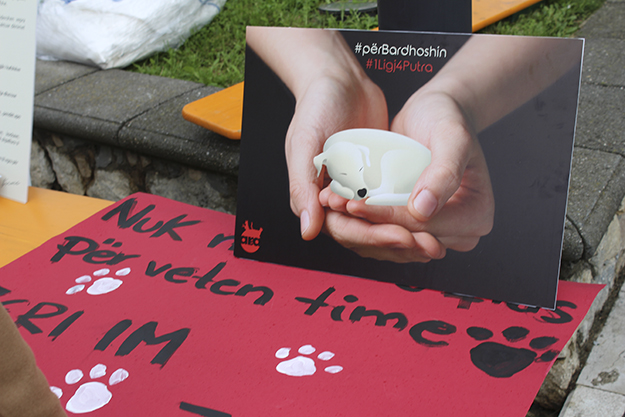 The brutal murder of a dog has prompted protests for animal rights and a petition for law changes in Albania. Photo: Merxhan Daci.

In Albania, there is no legislation that specifically sets out punitive measures for those who commit cruelty against animals, although elements of other legislation can be applicable. For example, in the case of the killed bear, the law that regulates hunting could be used to prosecute individuals since these animals are considered to be protected. If the case were to be taken to court, anyone found guilty under this law could be punished by a fine of up to 760 euros.

The Law on Veterinary Service also has some elements related to violence against animals that apply specifically to private vets, such as Article 76, which underlines that every act that causes unnecessary pain to animals is forbidden; violations of this are also punishable by fines of up to 760 euros. According to the Animal Rescue Albania, this law is incomplete and creates a lot of confusion.

Following the two high profile incidents in quick succession last month, Saimir Tahiri, Albania’s former Minister of Internal Affairs and a supporter of animal rights, reminded the public that last year he had proposed a draft law to the Parliament, according to which anyone found guilty of torturing or killing an animal would be punished by up to six months in jail. “One year on, I am repeating my proposal to stop violence against animals … Parliament hasn’t listened for so long. Now they simply can’t do it [ignore the calls for action] anymore,” Tahiri wrote in a Facebook post.

“In order to stop other abuse, killings, torture and pain; for our own safety, which is threatened by these dangerous individuals, Albania needs a law to punish whoever commits violent acts against animals.”

Animal Rescue Albania also reacted, initiating a petition demanding the criminalization of violence against animals in Albania. Their goal is to collect 20,000 signatures and to give the petition to Parliament so that they consider it and approve a new law.

“We couldn’t do anything for ‘Bardhosh,’ who lost his life. Let’s not allow him to be just another number in the horrendous list of brutal crimes against animals,” they wrote on their Facebook page. “In order to stop other abuse, killings, torture and pain; for our own safety, which is threatened by these dangerous individuals, Albania needs a law to punish whoever commits violent acts against animals.”

On October 7, a protest and petition signing was held in front of the Parliament; more than 10,000 signatures were collected in the first five days of the campaign alone. Many people came to the protest with their dogs and cats, and even more signed the petition in the following days. “I signed the petition and I believe this is the best thing I have done recently,” Edona Maluka, a young woman who was part of the protest told K2.0.

Besar, a 12-year-old boy who says he loves pets, told K2.0 that he attended the protest against animal violence even though he couldn’t sign the petition due to being under 18. “Today I am with Koko, my small dog,” he said. 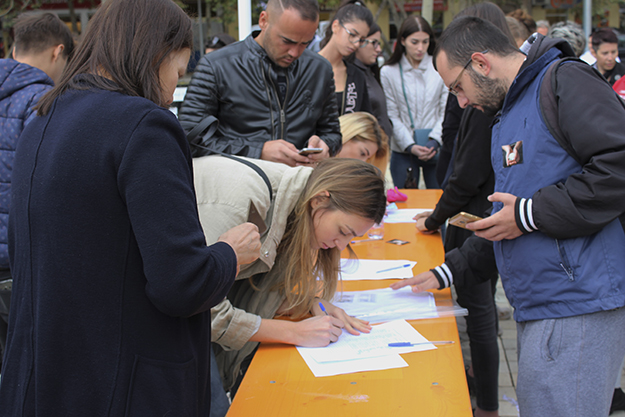 Over 10,000 signatures were collected in Tirana in the first five days of a campaign for animal rights. Photo: Merxhan Daci.

Andi Bora, a student from Tirana, also believes that the time has come to outlaw violence against animals. “I believe that animal violence happens everywhere in Albania, but thanks to the internet some of these cases have become newsworthy and we get to reflect,” he told K2.0. “I strongly recommend that the government prepares a law with punishments from fines to jail in extreme cases.”

Albi Beqiraj, who is one of the protest’s organizers, invented the hashtag #1law4paws, which has gradually become more and more popular online. He explained that their goal will be accomplished only when the petition goes to Parliament and is considered.

Ninety-five percent of respondents said that there should be punitive measures for people that are cruel to animals, with almost half thinking perpetrators should be jailed.

“We are working every day and in every corner. I am a volunteer here and we will be almost everywhere in Tirana and also in other towns until we have those 20,000 signatures,” he told K2.0. “We need the support of our lawmakers for this.”

Just a week after the brutal murder of the dog by the teen, another shocking case occurred in Berat, in central Albania. A man in his 40s was filmed throwing his dog into the Osum River with a stone tied around its neck so it couldn’t swim.

Recently, a poll was conducted on the popular citizen journalism Facebook page “Life is Fun” (JOQ) asking people to vote on what they think should happen to people who violate animal rights. Ninety-five percent of respondents said that there should be punitive measures for people that are cruel to animals, with almost half thinking perpetrators should be jailed. 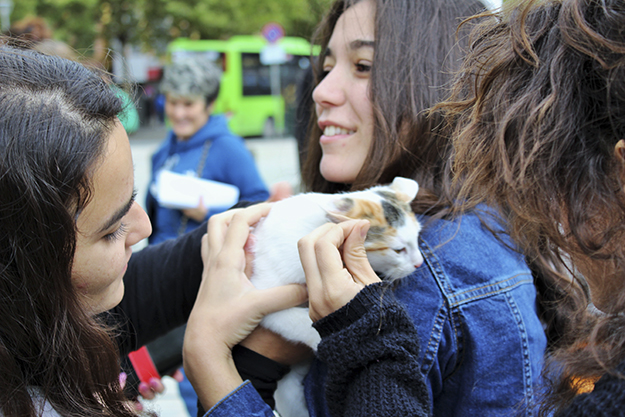 Activists in Albania hope that something will change soon and that animals will be safe from mistreatment. Photo:  Merxhan Daci.

Specifically, 28 percent of people support the idea that those who treat animal in a cruel way, should be jailed for between three and 12 months and a further 19 percent said “a more severe” punishment is needed, while 35 percent supported the idea of “voluntary work, which means taking care of animals.” Thirteen percent of respondents said that perpetrators should face “a fat fine,” while only five percent said that they should not be punished at all.

However, for now, it is still common in Albania to see animals mistreated in the streets. Activists say that until a clear law is approved, these brutal cases won’t stop, while online media will continue to show shocking images.K