The government’s pendulum — between the pandemic and economy - Kosovo 2.0
In-depth | COVID-19

The government’s pendulum — between the pandemic and economy

Controversy and criticism over the 12 day gastronomy sector shutdown: what effect could it have?

Throughout midday, at least half the tables at “Krip’ e Zemër” are usually filled with customers having lunch. At other times of the day, the customer turnout at Ahmet Bylykbashi’s restaurant is weak.

On Monday, April 18, lunchtime at the restaurant was not as busy as usual, even though it was the first day open after a mandatory 12 day break.

On April 5, The Prime Minister Albin Kurti was at a news conference with Minister of Health Arben Vitia. The government’s leader said that “looking at the worrying trend of infection increase,” members of his cabinet had agreed on new measures against COVID-19 to slow its spread “so the public health capacities are not overflowing beyond their limits.”

His subordinate, Vitia said that they asked the National Institute of Public Health (NIPH) for an analysis of the epidemiological situation, and from their research they named a few categories “with a high potential of infection spread.”

Bylykbashi knew that whenever the decision for strengthening the measures would be taken by the new government, his business would be the first on the list of those that would close.

These categories include restaurants, coffee shops, public and private institutions with common work spaces, shopping centers, different celebrations and family gatherings, with a special emphasis on funerals and wakes. Then universities and schools, as well as people coming from abroad. So they were closed or limited for 12 days by a government decision.

But even before this, word had spread that the new government could send the country into isolation because of the increasing number of infected people, hospitalized patients, and reported deaths. This last wave of COVID-19 infections came after the political campaign for the snap elections on February 14, where during party gatherings, distance and other protective measures were not respected and often the number of participants allowed in closed spaces was surpassed.

Bylykbashi knew that whenever the decision for strengthening the measures would be taken by the new government, his business would be the first on the list of those that would close. “We hoped that they would let us work at least until 6 p.m.,” says the 33-year-old, who like all other restaurateurs at the time, was allowed to keep his business open until 10:00 p.m.. 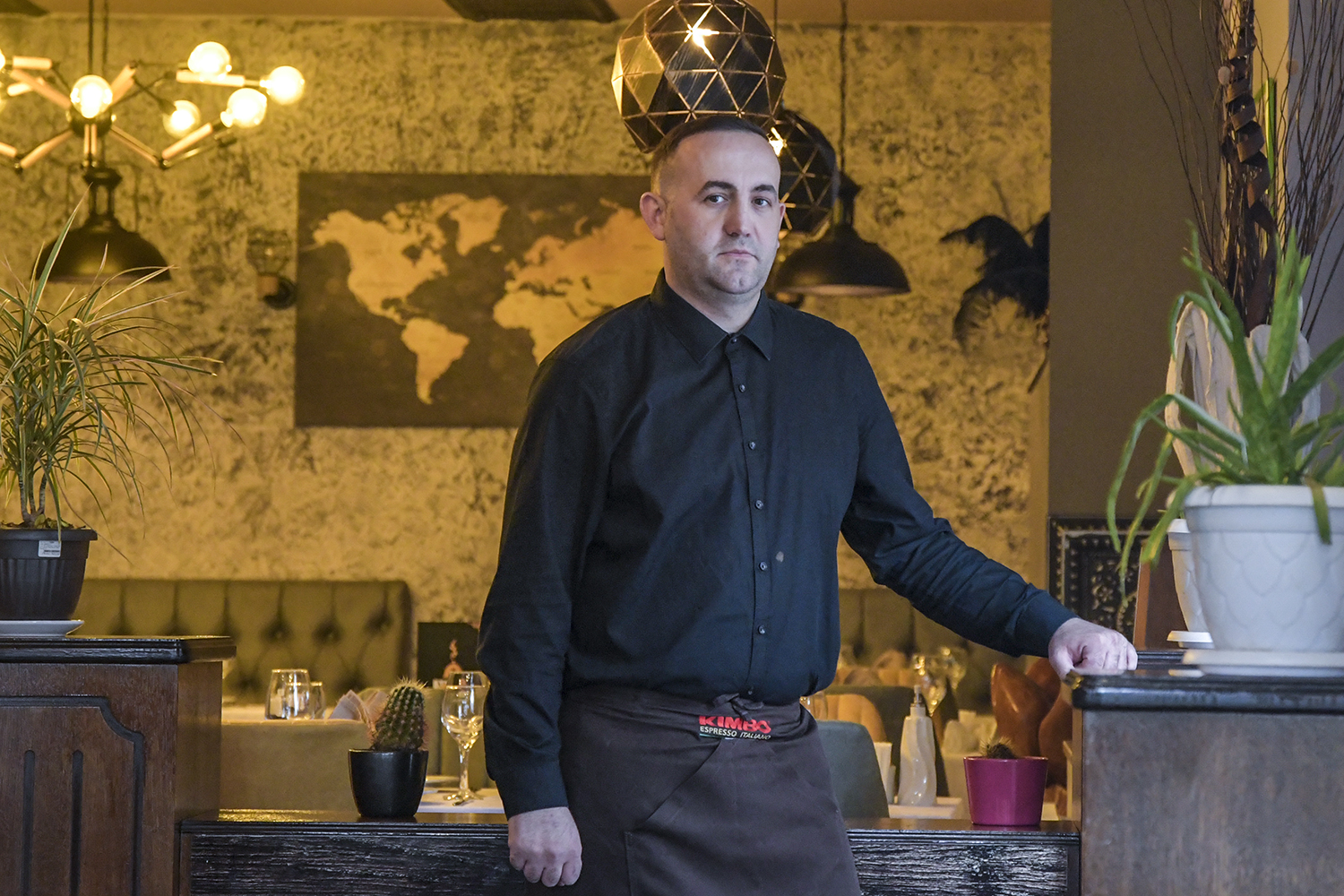 The owner of a business in Prishtina has had financial difficulties keeping his business open for some months now. Photo: Atdhe Mulla / K2.0.

His hope vanished two or three days before Kurti’s and Vitia’s conference, when, even though not official yet, Bylykbashi says that it was understood that “we were being closed.” He says that he decided that for those two weeks he would fully close his restaurant, even though the government decision allowed “take away” and “delivery” services.

“We are a new business and we don’t do much delivery,” he says, adding that he could not afford to work under those conditions since the daily working expenses would not be covered by sales. Additionally, the meat and other food would probably go bad for a lack of sufficient orders.

Above all, closing the restaurant would end the wages of his seven employees. “[The workers] are already seeing that there is not a lot of business, and they agreed [to close for 12 days],” he says, while noting that for the past few months now he has had financial difficulties; to the point that he has not paid rent since January, something that has begun to cause him trouble with the landlord.

One blow after another

Gastronomy has continuously been considered a high-risk sector for COVID-19 spread. During the pandemic year it has been directly hit by the restrictions to prevent the spread of the virus imposed through consecutive governments. Closings and work limitations have been followed by vast financial losses for the sector that employs tens of thousands of workers.

And for about 20,000 businesses in this sector, financial aid was late and insufficient. The last 10-month long government led by Avdullah Hoti, after half a year of dragging it out, finally approved the Law on Economic Recovery in the Assembly, in December, while the 3 million euros for the gastronomic sector were finally distributed in January of this year.

Now that over a year has passed since the first closing of the gastronomy sector at the beginning of 2020, this following closing has been followed with vast losses.

The short-lived government before that, led by Kurti, for the first three months of the pandemic guaranteed 50% of workers’ wages who had lost their jobs because of the government measures against the spread of COVID-19. However, because a large number of workers in the gastronomy sector do not have contracts, many of them did not receive the financial aid they were owed.

Even the business owners were paid half their rent for those months, but because landlords and renters declare lower rents than in reality, in order to avoid taxes, this situation might have made it impossible for many to benefit from the financial aid they were allocated.

Now that over a year has passed since the first closing of the gastronomy sector at the beginning of 2020, this most recent closure has been followed with vast losses. For the 12 days that the strengthened measures lasted, it has been reported that the sector lost 30 million euros, according to the Kosovo Alliance of Businesses.

In the April 5 conference, Kurti mentioned that in addition to protecting health, the government’s focus is that “for as much as it is possible to keep economic activity open.” In addition, he promised that 50% of the workers’ wages would be paid, and 50% of the rents of the businesses affected by the last measures. 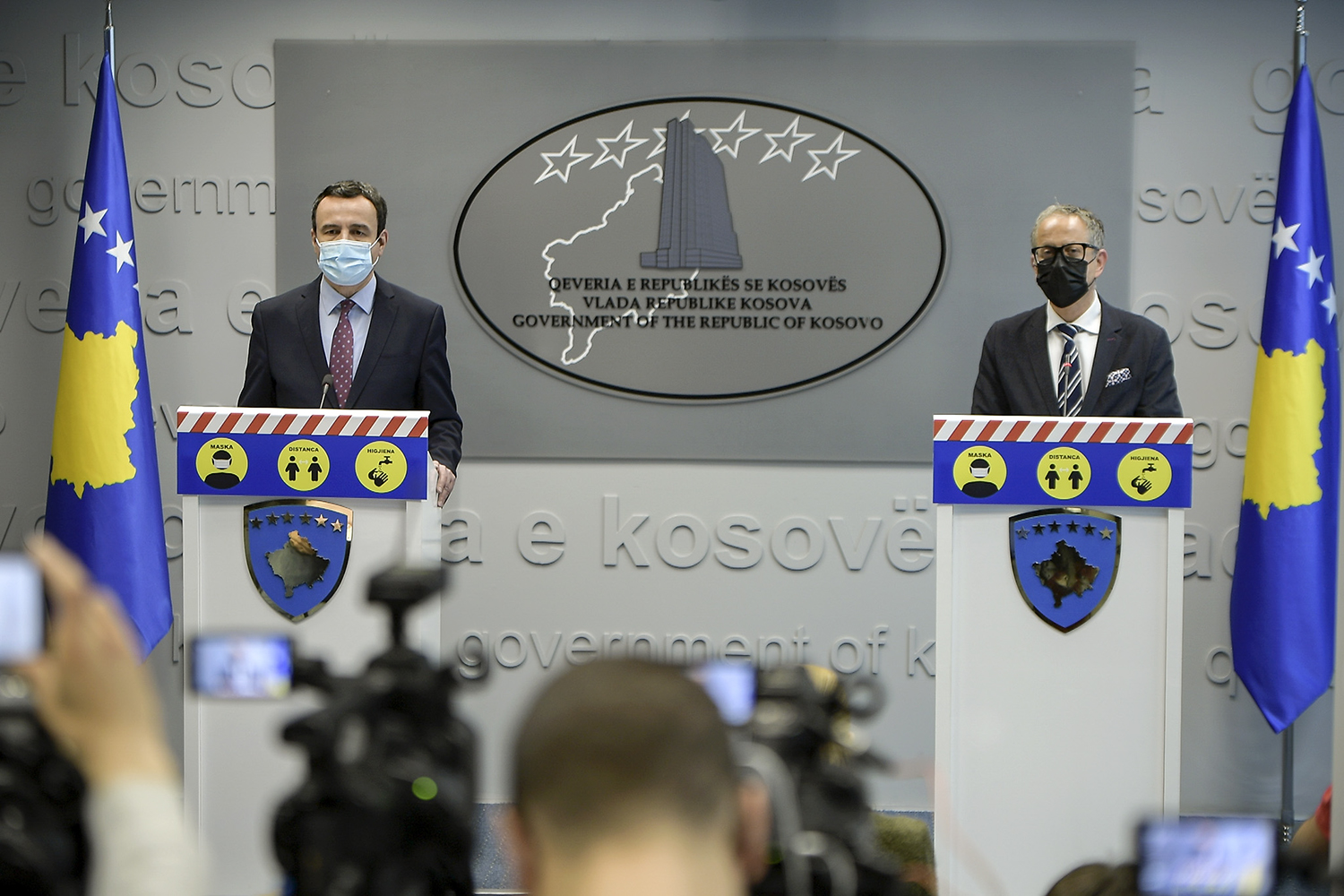 Prime Minister Albin Kurti and the Minister of Health Arben Vitia said that the 12 day strengthening of the measures by the government was in accordance with the worsening COVID-19 situation. Foto by the Prime Minister’s Office.

On April 21, the government allocated a sum of 6 million euros to aid the gastronomy sector, however it has yet to inform when the money will be distributed. Bylykbashi hopes that this will happen as soon as possible. He expects to pay his employees, who have not received any salary recently, with that money, and pay the landlord 50% of his back rent.

Numbers of those infected with COVID-19 have increased visibly in the postelection month and during the period of partial closing, straining hospital capacities. This worsened situation is continuing even after the easing of the measures, while according to reports by the Infectious Disease Clinic at UCCK, most patients have severe symptoms as a consequence of mass infections with the British variant of the virus.

Bujar Vitia, a journalist who works in the health field, notes that the restrictive measures have been necessary for citizens and businesses as well because of the high number of COVID-19 infections. Particularly, because with the public health services, among others, “there isn’t sufficient medical staff, there aren’t sufficient beds.”

“Since January there has been no pandemic management at all; the peak was reached during the electoral campaign, and whoever came into power did not have the legitimacy to restrict the citizens,” he says.

However, according to him the measures have been drastic since they have damaged the economy excessively “which has already been damaged for some time.” “We cannot sacrifice the economy because of the complete irresponsibility of politicians,” he says.

“Kosovo needs measure monitoring — this is the only way we can manage the pandemic,”

He says that the government has not taken into consideration other alternatives for measures and has not consulted the relevant actors. The same criticism has been addressed to the government by economic organizations and business chambers as well, who have said that during the meeting with the health minister they were told that the decision for restrictions was nonnegotiable. Even though some of the businesses proposals were taken into consideration, this was insufficient for the sector.

According to the journalist Vitia, one of the options that the government should consider is that instead of closing businesses for a period and then distributing financial aid to them,“ use the financial aid for the health staff, to help the state’s health capacities.” In addition, according to him with that aid, the inspection staff could be increased and push the gastronomy sector to respect the measures strictly. 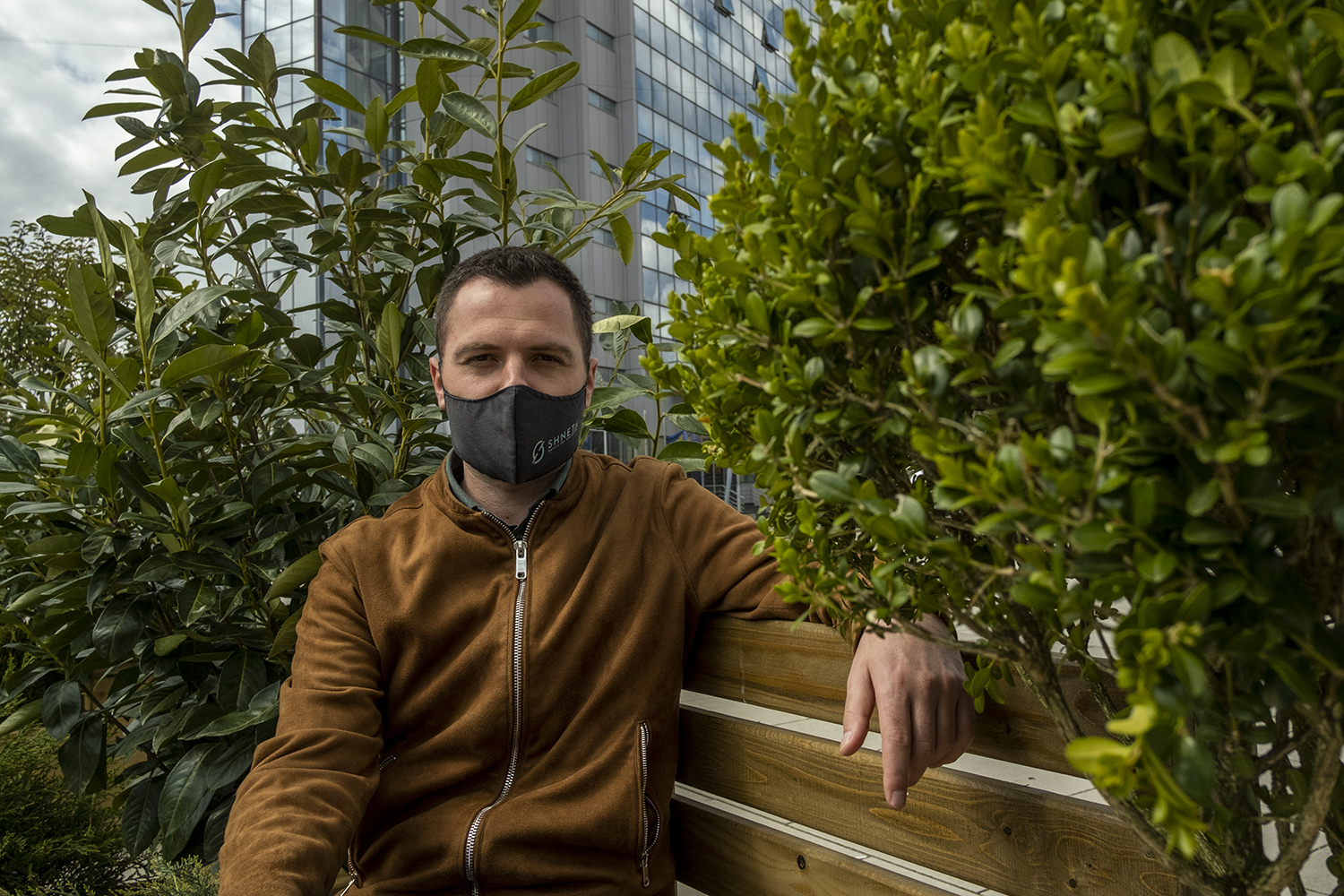 Health journalist Bujar Vitia thinks that the government should take measures to strengthen the capacities of the health institutions. Photo: Atdhe Mulla / K2.0.

“Kosovo needs measure monitoring — this is the only way we can manage the pandemic,” he says, while he highlights that mass vaccination is the best method against the pandemic. Until April 18, only about 16,000 citizens have been vaccinated — mainly health workers and the elderly —  with donated vaccines from the COVAX initiative, which makes Kosovo among the countries with the slowest vaccination process in Europe.

On the other hand, Vitia the journalist says that the effects of the almost two week restrictions are expected to be seen throughout this week. But, the travels that thousands of citizens have made to neighboring countries during those two weeks — because there were no restrictions to leave the country — are expected to hurt the government’s management of the virus spread.

During April 10 to 11, around 30,000 Kosovars spent the weekend in Albania, where the measures are eased to some extent after systematic vaccination of the population since January.

Some ministers and members of the government cabinet as well as some Vetëvendosje MPs went to Albania, where they participated in the electoral campaign before the parliamentary elections on April 25. MPs and ministers shared photographs on social media of the meetings in Albania, which caused many reactions mainly on social media.

“It was not correct and the message that was sent was in favor of the coronavirus; and this creates insubordination [of citizens] as well,” says Vitia.

During almost two weeks while the strict measures were in power, the Kosovo Police have implemented the Anti COVID-19 law creating thousands of citations, while in public squares and city parks, citizen gatherings were reported where distance was not respected. Even the opposition parties criticized the government for hypocrisy, expressing doubts about the effectiveness of the COVID-19 preventive measures. K