The little revolution of Runik

Town’s House of Culture to host first show in nearly 30 years on Saturday.

Petrit Halilaj leaves his house early in the morning and starts greeting his neighbors as he walks toward the center of town, which lies only 200 meters from his family home in Runik. The guys at the carwash right at the end of his road are the first to yell across the street to wish him a good day, and a couple of young girls on their way out of school are next.

In February, Halilaj returned to Kosovo from his usual home of Berlin, pausing his life as an internationally acclaimed contemporary artist to revive a space that once hosted the town’s liveliest times: Runik’s House of Culture.

Until three weeks ago, the House of Culture hosted only trash: 16 pickup trucks worth of trash, to be precise. The building, currently under the management of the Kosovo Privatization Agency, was practically in ruins, with the vast majority of the roof gone, several walls destroyed, and nothing much left from the floor but soil. A tree has grown where a theater and rows of wooden seats once stood.

But now this cultural space is experiencing a resuscitation attempt by the people of the town. On Saturday (July 7) at 21:00, it will host its first show in over two decades, “Shkrepëtima,” a theater-based performance created and directed by Halilaj. The performance is a product of five-months of research into the cultural history of the venue and its meaning for the inhabitants of Runik and its surrounding villages, conducted by a team of people led by the artist. 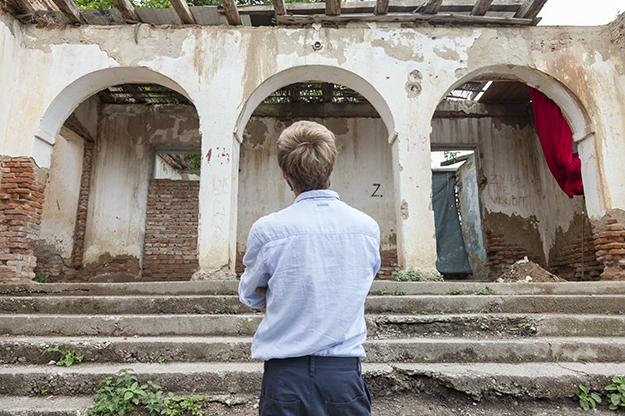 Petrit Halilaj returned to Runik in February to create “Shkrepëtima,” a performance that will take place at the town’s abandoned House of Culture. Photo: Majlinda Hoxha / K2.0.

Translating as ‘flash,’ ‘lightning bolt’ or ‘a sudden and intense feeling,’ the “Shkrepëtima” project was born to bring a community back to life as much as a building. Built in the 1950s, Runik’s House of Culture conserves the simple structure of the communist era, with only one floor in the shape of a letter T. It once hosted a theater and a cinema, a library with up to 12,000 books, and a cooperative.

During the ’70s and ’80s especially, the venue hosted numerous plays and concerts. However, it entered a stage of abandonment in the ’90s, when censorship and repression became a common feature of life in town, as it did across Kosovo. The space became abandoned and ultimately destroyed, a state in which it has remained.

For Saturday’s event, Halilaj has written a completely new performance with fragments of classical plays that were put on in the House of Culture in the past, including “Toka Jonë” (“Our Land”), “Cuca e Maleve” (Mountain Lass), “Nita” and “Hakmarrja” (“The Revenge”). More than 30 people, including professional actors but also former teachers, children and residents of Runik, will have roles in the play, which will also include musical elements.

As well as a contribution from ANDRRA, the musical aspect of the performance will also incorporate the use of ocarinas, a reference to the oldest musical instrument ever found in the Balkans, an ocarina dating back to the Stone Age that was discovered in Runik. “It’s a chance to write a new story that grows from memory and history,” explains Halilaj, who has put effort into researching and establishing a connection between the two worlds of Runik, the one above ground, and its historical underground. 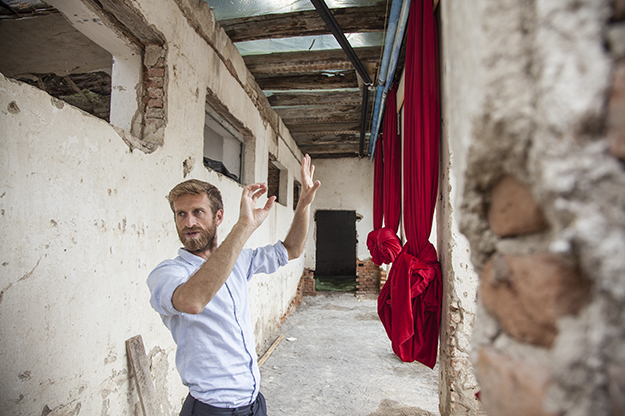 Together with a team, Petrit Halilaj undertook a five-month long research project that included interviews with former teachers and residents of Runik and examining archival documents in order to create a ‘cultural portrait’ of the town. Photo: Majlinda Hoxha / K2.0.

Halilaj hopes his heavily researched cultural portrait of the town will serve as a call to wake up. “This can change this opinion that nothing is worth doing here, or that no one will come back, to change it forever and start transforming it as a building,” he says.

For that, he has created a performance that “has so much to do with dreams, with a person who wants something more and goes against tradition and different challenges to make it happen.” Indeed, the excerpts of plays selected speak to the pursuit of being something that one is not meant to be; of overcoming. They are stories of forbidden love, blood feuds, fighting preconceived ideas and rising above prejudice.

In undertaking the project, Halilaj wanted “to understand what public space is in the place I come from and how we treat it, and what this means for us.” As a gay man himself, part of his motivation was sparked by taking part in Kosovo’s first LGBT pride parade that took place in October last year, a new way of experiencing public space in his country.

The relation between public and private space takes on additional relevance, he says, as they are spaces of expression conditioned and shaped by many layers, including the pressures exerted by society and family. “The street, and public space, and the relation between these two, and this clash between the institution that is family and the new system and life created after the war… there is still a huge tension, you think it’s invisible because you forget, but it hits you,” he says.

To select the fragments and create the performance, the voices of the people of Runik, brought to light during long interviews, took a central role. One of those voices belonged to Sala Ahmetaj, a woman from the village of Radishevë, not too far from the House of Culture. Ahmetaj (born in 1950) was the first woman to teach in her village, at the age of 19. Later she became the first woman from the region of Drenica to become a professor.

The name of the project even comes from Ahmetaj, as ‘Shkrepëtima’ is the name of a cultural magazine she co-founded alongside teachers and students at a school in Runik. The magazine was produced on a single typewriter throughout the ’70s and ’80s and incorporated all sorts of essays, poems and articles. It was also very connected with activities at the House of Culture. 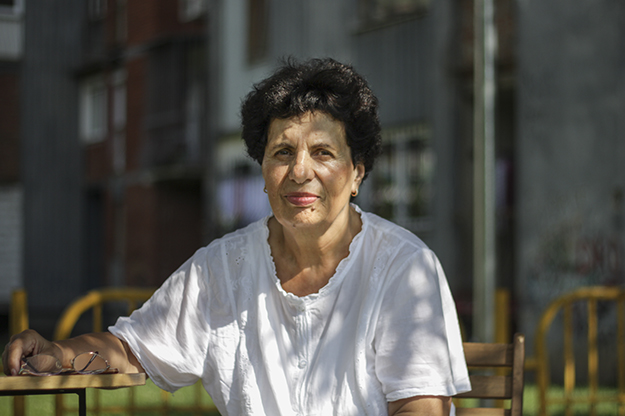 “When I look at it in retrospect, my generation had a mission back then,” Ahmetaj says. “I wasn’t just a teacher, many of us were also missionaries. In the 1960s Kosovo was, in terms of education, culture and other areas, in absolute darkness. In the 1970s we started to push things forward as Kosovo was living through a national renaissance. I was lucky to be part of that wave that worked with unprecedented dedication. We did things that were not really our task.”

Ahmetaj recalls engaging the students in theater, but also playing roles herself in plays like “Toka Jonë” and “Hakmarrja.” “The selection of the plays that we made was partly to cultivate a critical conscience, or in the case of “Cuca e Maleve,” to cultivate general knowledge, specifically on education among girls,” she says.

Ahmetaj, who currently works as a professor of the Albanian language at the University of Prishtina, also recalls the value of having such a center and especially its library, from which she took many books that inspired her to pursue her dream of becoming a teacher.

Another feature of the performance will be Runik’s librarian, Zenije Selmani, who saved many of the books from the House of Culture’s library and helps continue its legacy for the next generation in the town’s current public library. One of the members of that younger generation, 23-year-old Blerta Haziraj, was also involved in the research that went into “Shkrepëtima.”

“When I was younger we used to go to the mosque, which was also a space to socialize,” Haziraj explains, talking of Runik with a special affection. “The House of Culture was next to it, and once we had the curiosity to enter, we found [some of the old costumes], which became a reason to continue working with a theater group.” 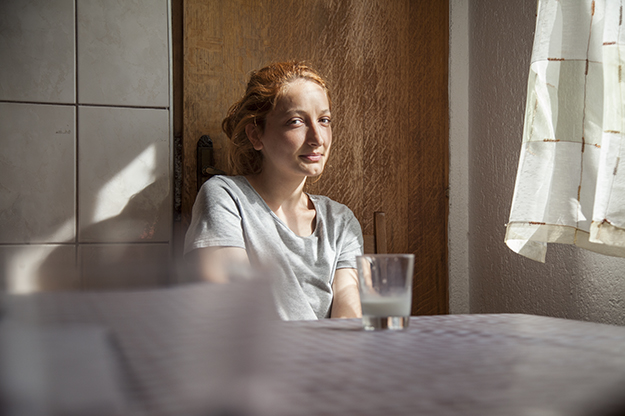 For 23-year-old Blerta Haziraj the new project has revitalized the town, while recovering the spirit and responsibility of those involved in the House of Culture in the past. Photo: Majlinda Hoxha / K2.0.

The theatrical tradition continued for Haziraj at school, and like Ahmetaj, she also appeared in classics like “Toka Jonë.” However, there is no longer a theater in the town. “Back then you had the theater, but you had no funding to continue working. Now you have the finances, but you don’t have the theater,” she says. These days, neither Haziraj nor her sisters, most of whom are younger, live in Runik. “There is nothing here for young people, they are leaving,” she says.

However, since February Hazriaj has seen what she describes as a special energy in the town with people showing a collective enthusiasm toward restoring the spirit, if not the building, of the House of Culture. “People who were part of these activities back then saw themselves as missionaries, who were there to raise a social or cultural or personal identity. It gives us a responsibility,” she states.

For 49-year-old Shefki Beqiri, who spent 10 years in Germany and now owns one of the two restaurants on the town’s main road, people lost hope in Runik. “Now everything is private,” he complains. Only private businesses lie on Runik’s main road and a bunch of small pop-up kiosks block the view of the House of Culture, around which neighbors gather and talk about its fate. 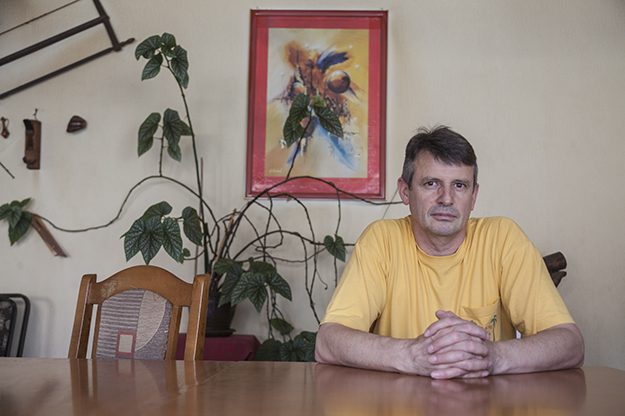 Shefki Beqiri believes that there are not enough public spaces in Runik, with too much of the center of the town privatized. Photo: Majlinda Hoxha / K2.0.

“This is a place where you could have a cultural house, or a park to walk around and enjoy but there are only cars and there is nowhere to do anything,” Beqiri says. “The community should do something, but everybody fights for their own interest, and the Municipality [of Skenderaj] doesn’t care. Only Petrit could pull something like this out of the ruins.”

Despite believing that people have lost hope, the posters and flyers of “Shkrepëtima” are the only ones to decorate the doors and bar of Beqiri’s restaurant. He says that he will definitely be at Saturday night’s performance.K