Decision over change of name and sex marker presented to Constitutional Court.

When Blert Morina started hormonal therapy in January he thought this would be the most challenging element of his planned transition. He never expected that his efforts would be channeled into piles of documents and take him through every level of the Kosovar justice system.

In April, Morina attempted to change both the name and sex marker in his identification documents at the Civil Registry Office in Gjakova, a request which was rejected at the recommendation of the Agency for Civil Registry (ACR), a body that operates with the Ministry of Internal Affairs. He appealed the decision directly to the Agency, but Morina’s appeal was rejected and described as being “without basis.”

Yesterday (July 30), together with his legal representative Rina Kika, Morina filed a complaint at the Constitutional Court of Republic of Kosovo against the ACR, asking for a constitutional review of the decision to reject his appeal.

“For me, as a transgender person, I thought that the most difficult stage would be when the [physical] transition starts,” Morina says. “I didn’t think that changing the name and sex markers would be the moment that I needed to dedicate myself completely. It is taking up a lot of time and energy and causing a lot of pressure.”

Morina was assigned a female biological sex at birth, but self-identifies as a man in all spheres of life, from his family and social circles to his work. Years after Morina’s social transition, which involved coming out, using a name in accordance to his desired gender identity and having people use the appropriate pronouns, he started with the hormonal transition — for trans men, this means taking extra testosterone.

He filed the request for his documents to match his gender identity in an effort to enjoy full inclusion in society, as the mismatch between the two has led to him experiencing regular discrimination in his daily life.

Together with Kika, Morina explained to K2.0 how his current identification documents hamper many activities that he regularly undertakes, from accessing institutions to issues at the bank — in short, any time he has to show his ID. The pair particularly highlight the unpleasant experiences Morina suffers every time he crosses a border, where he is often met with a thorough investigation.

The hormonal therapy has already left visible changes on Morina’s voice, face and body. As such, he is experiencing an increased number of difficult encounters.

“When I started the procedure of changing the name and sex marker I thought it will be an easy thing because the legislation guarantees us this.”

“Just a few days ago, I went to take a bank card and a girl on the desk said ‘Blerta Morina needs to take it, you can’t do it in her place,’” Morina says. “I just put my ID in front of her, and it was such an unpleasant situation for her and for me. She still continued to not believe me. It is frustrating to be turned back, sometimes on a daily basis.”

His experiences with changing the details in his documents have left Morina with changed views on his country’s approach to trans persons. “In the beginning, when I started the transition in January, I was constantly promoting Kosovo’s good legislation in every regional meeting,” Morina says. “When I started the procedure of changing the name and sex marker I thought it will be an easy thing because the legislation guarantees us this.”

Morina describes the first time his request was rejected at the recommendation of the ACR as ‘“the first disappointment,” adding that the manner in which it was delivered added to the difficulty. “It was emotionally hard because they constantly referred to me as Miss Blerta,” he tells K2.0.

Morina’s request to change the name on his identification documents in April referred to the ‘Conditions and Procedures for Personal Name Change and Corrections’ laid out in the government’s Administrative Instructions. The request specifically highlighted the provision that states: ‘Personal name hinders person’s integration into society.’

However, the Civil Registry Office’s decision, quoting the recommendation of the ACR’s Commission, stated that the application didn’t meet the conditions of this Administrative Instruction. “The Commission evaluated that the offered reasoning from the applicant that filed the request doesn’t stand … as ‘Blerta’ doesn’t hinder the person’s integration into society.”

No further explanation was given in April, but May’s official decision to reject Morina’s appeal saw the ACR offer some more reasoning, specifically that Morina “didn’t give any evidence, document, note or photography, or archive document that shows that Blerta Morina’s personal name hinders the person’s integration into society.”

Kika points out that the obligation to offer additional documents isn’t foreseen in legislation. In a 27-page complaint filed to the Constitutional Court, Kika, among others, argued that Morina doesn’t come under any of the restrictions listed under the Law on Personal Name, which outline when a change of name is not permitted. 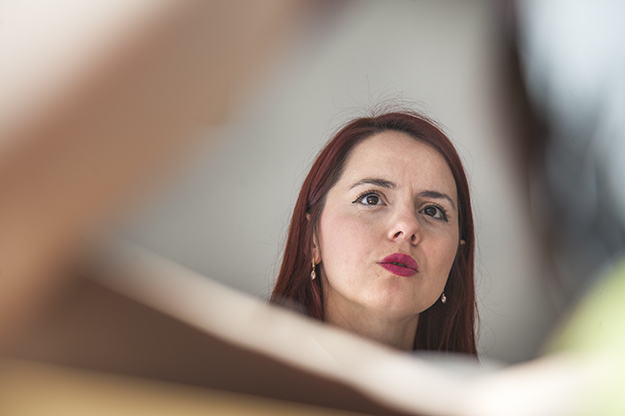 The lawyer also points to the state violating one of its own principles of procedure, that of active help when attempting to exercise a right. “The state administration has the duty to actively help the applicant by telling them which documents are lacking,” she states. “So you can’t just refuse a request because the applicant didn’t submit a document by law if you didn’t request it as well.”

In regard to their refusal of the request to change the sex marker, the ACR again requested additional evidence in the form of a medical report or decision.

Kika also highlights Article 53 of the Constitution of Kosovo which obliges European Court of Human Rights (ECHR) practices to be applied to Kosovar legislation. Previous ECHR cases have ruled that it is a violation of a person’s human rights, specifically the right to privacy, to condition legal recognition of gender with physical interventions, such as surgery.

For Morina, who is also Executive Director of the Center for Equality and Liberty NGO which campaigns for LGBTI rights, the decision clearly shows the lack of understanding about transgender issues at an institutional level in Kosovo. “There is a lack of competency because the first time you need to take a decision like this, you should have general information for all possible communities,” he says.

Yesterday’s request to the Constitutional Court was preceded by a suit filed to the Basic Court in Prishtina last week, requesting the annulment of the ACR’s decision. According to Kika, the ACR’s decision is discriminatory and hence needs to be annulled, as it excludes Morina based on his gender identity while violating Morina’s right to be treated equally and with privacy.

Kosovo’s Ombudsperson Hilmi Jashari explains to K2.0 how Morina’s case is a portrait of a lack of expertise of international standards in Kosovo’s institutions, and that application of these needs to be prioritized if in conflict with local legislation. As he puts it, an administrative regulation can’t have the same power in decision-making as the Constitution.

Jashari himself is getting involved in Morina’s case as an amicus curiae (friend of the court), a role that will see Ombudsperson assisting the Constitutional court by offering information and expertise. “I think we will uphold the constitutional spirit and human rights standards, and especially a right which is crucial for citizens of this country,” Jashari tells K2.0. 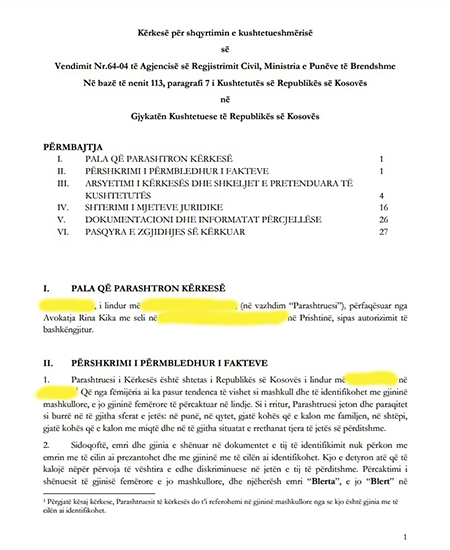 A request to review the decision at the Constitutional Court was submitted on Monday July 30, and has found support with Kosovo’s Ombudsperson and other organizations and individuals. Photo courtesy of Rina Kika.

Jashari also supports Kika’s decision to take the complaint to the Constitutional Court before exhausting other available legal measures. Practically, it would mean first waiting for a decision from the Basic Court, followed by an appeal to the court in case of refusal, and only then taking the case to the Constitutional Court. However, lawyers argue that evidence shows that the Basic Court can take more than five years to deliver a verdict.

“All of those procedural delays that can be visible during these processes don’t guarantee the right to an effective remedy, because based on our reports the court processes can last with 8 or 11 years,” Jashari tells K2.0. “In Morina’s case it is meaningful because it will just drag out all the problems, anxiety and suffering.”

Morina’s request of gender identity recognition in his identification documents and the decision to file the request at Constitutional Court to review the constitutionality of the ACR’s decision has received the support of a number of organizations, activists and individuals.

The group came together to form a common declaration. “We insist that state institutions should make it clear that the citizens of Kosovo are not a homogeneous group, but belong to different social groups as reflected in the legislation of our state,” the statement read. “The needs of the transgender community are the needs of Kosovo’s citizens, therefore their exclusion implies a failure to protect the rights guaranteed by the laws and the Constitution of Kosovo.”K