But some students have greater burdens.

The government of Kosovo decided in September 2021 to end tuition fees for students in bachelor’s and master’s programs. The decision, announced by Minister of Education Arbërie Nagavci and Prime Minister Albin Kurti, was presented as a measure that will contribute to social equality and that will encourage students to pursue an education.

Along with freeing students at all public universities in Kosovo from paying semester fees at the bachelor’s and master’s levels, the administrative instruction also frees students from paying admission fees or for differential exams for master’s enrollment. However, students will still have to pay for the semester or exam fees if they don’t pass their classes on the first try and need to register an additional time.

With this decision, Kosovo joins other European countries, such as Germany, where students do not have to pay tuition fees. While the measure has been received by students in general as a positive, some are skeptical whether it will have meaningful effects on the education system or even for students’ budgets.

One of those critical voices is coming from ORCA, which monitors transparency and quality in higher education in Kosovo. Its deputy director, Gramos Buçinca, says that the measure won’t have much impact. “It will not influence the quality of education,” he said, “and it will not really influence considerably the economic conditions of students, who already could access grants and receive support if they belonged to certain categories.”

Universities in Kosovo have the lowest tuition fees in the region. Until now students have had to pay a 25 euro fee every semester while master’s students had to pay 150 euros per semester. Admission exams, now free for first time registration, used to cost 2.5 euros, while the fee for enrollment exams for master’s degrees were 5 euros.

In addition, the Ministry of Education allocates a sum every year dedicated to needs-based scholarships for university students. The scholarships prioritize categories such as students from families supported by social welfare benefits or with more than one student in school, students with disabilities and the children of KLA veterans, invalids or missing people.

For these reasons, Buçinca said, “this measure is more of a public stand than an influential measure, especially in relation to Albania, where student fees are very high. But Kosovo is one of the places with the greatest access to education.” Instead of removing tuition fees, Buçinca supports increasing university budgets in order to increase their capacity to produce scientific research and improve teaching capacities. 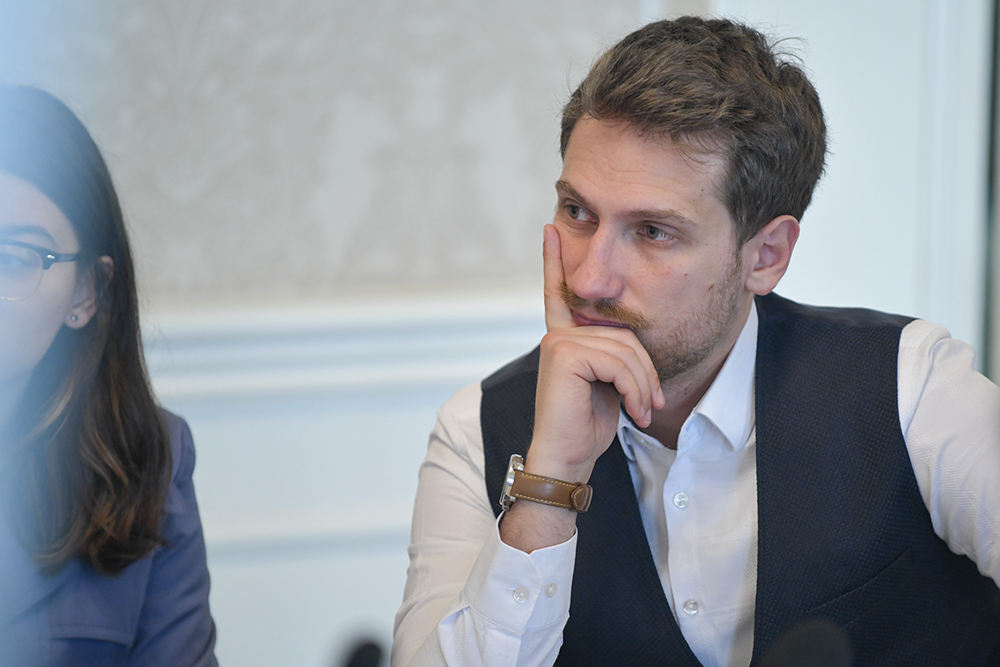 According to data collected by GAP Institute, the University of Prishtina generated a substantial amount of income by itself in 2020, nearly 4 million euros, which added to the 30 million euros provided by the Ministry of Education for its annual budget. But with the measure to remove student fees, universities will now be left without one of the few ways they had to generate their own income, aside from the public budget.

Removing tuition fees would leave Kosovo’s biggest university with a deficit of approximately 1.9 million euros, based on the number of students in master’s and bachelor’s degrees from the academic year 2020-2021. According to data collected by GAP, based on the number of students from the past academic year, the seven public universities in Kosovo together would be missing an approximate amount of 2 million euros after freeing students from paying fees.

When he publicly presented the plan to end tuition fees, Prime Minister Kurti said that universities would be compensated for the loss of income through an increase in the budget provided by the state. The public budget for the University of Prishtina has been raised by 1 million euros, while other public universities in Kosovo have also seen an increased budget.

K2.0 has reached out to the Ministry of Education and the University of Prishtina for comment but they have not responded.

There are bigger expenses than semester fees

While the budget of public universities will be marginally affected by these changes, students seem to have welcomed the decision to remove fees, even if the savings are relatively symbolic compared with the overall expenses of academic life.

According to a report published by ORCA about student expenses, students spend an average of 150 euros per month during their studies, while this amount can go up to about 220 euros for students renting an apartment in Prishtina.

That’s the situation for the 24-year-old Shkamb Jaha from Gjakova, a student at the Faculty of Arts who moved to Prishtina in 2016 to pursue painting. He is now finishing his master’s degree in painting, a degree that he has devoted countless hours to afterhours, often spending his time at the faculty atelier until it closes at night. 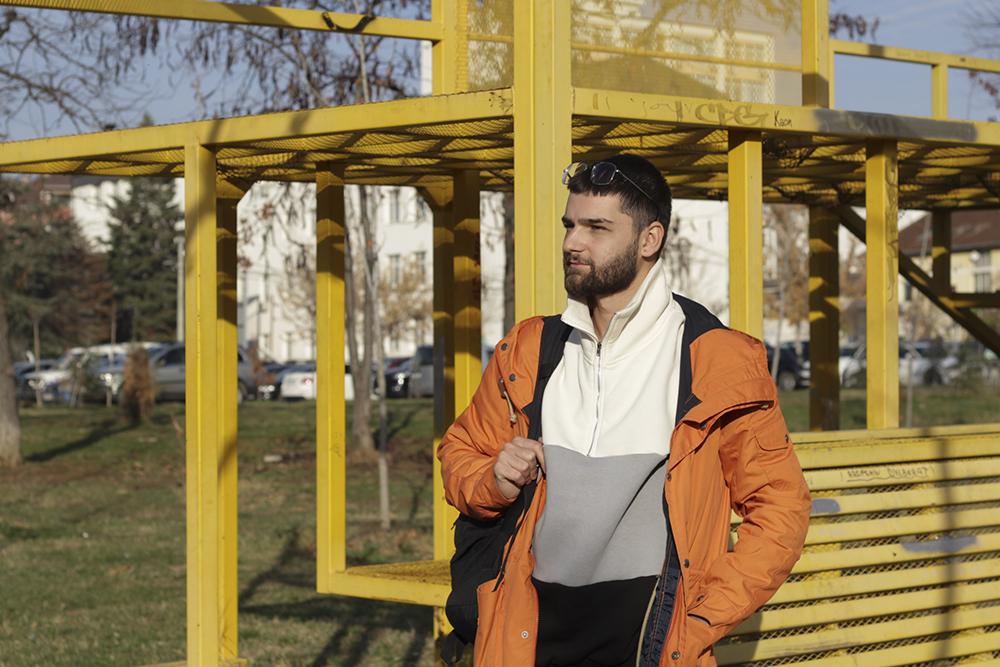 Painting student Shkamb Jaha has had to foot the bill for his own art materials. Photo: Cristina Marí / K2.0.

Jaha said that he received economic support from his family and he also received the ministry’s scholarship, making it possible for him not to need a job and focus on his studies.

But he also belongs to a discipline where students have the highest expenses.

“What I always did at the beginning of the year, when I got the scholarship, was to spend a big amount on paint and materials for painting,” said Jaha. The faculty does not cover any of these expenses and students have to be able to afford it themselves in order to produce academic work.

The removal of academic fees may be more noticeable for disadvantaged communities, especially among those interested in studying at the master’s level, where fees are higher. 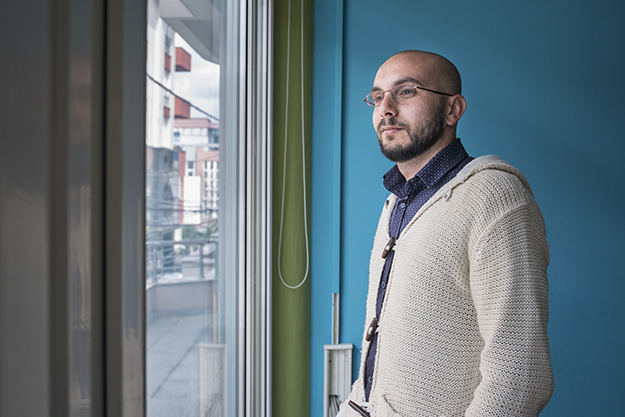 Avni Mustafa, director of Roma Versitas, an organization supporting Roma, Egyptian and Ashkali communities, says that he has received numerous calls showing interest in registering for master’s programs. He thinks this uptick in interest is a direct result of the removal of tuition fees.

“Last year we could count the students at the master’s level: only two students,” said Mustafa. “This year I am aware of about 20 or 25 people who actually have shown strong interest in registering and this is particularly important, to have the ability to register in your education particularly in the city where you have grown up.”

One of those students is Nuhi Morina, from Prizren, who is now pursuing his master’s in Computer Science in his home city at the University of Prizren.

Morina, who is 27 years old, finished his bachelor’s in 2016 and has since been living off of short term contracts that offer little stability. Now he dreams of becoming a teacher.

Morina is aware that not many Roma students enter master’s studies in Kosovo. “Before, you could count them with the fingers of one hand,” he said. He said this was due to problems like the lack of knowledge about enrolling and a difficult economic situation, reasons why he had to take a break in his studies.

Nevertheless, he is still skeptical of a diploma’s value. “How valuable is a diploma, and how valuable is every student,” he asked, “considering the lack of working opportunities we have later, and then the prejudices and discrimination that we have to face when looking for a job?

Student representatives in Prishtina raised a complaint to the Ministry of Education regarding the introduction of new fees that students would have to pay if they needed to repeat their exams more than once. The initial administrative instruction approved by the Ministry of Education did not exempt students from some of the new fees affecting the ability of students to take these tests.

According to the initial administrative instruction, if a student misses their first exam or fails to pass it, bachelor's students would have to pay 1 euro to take the next one, while master's students would pay 2.5 euros and PhD students 5 euros.
The Student Parliament at the University of Prishtina formally requested the Ministry of Education remove such fees before January 2022, when the official exam period starts.

“There are faculties like Medicine or the Technical faculty, where students, especially at the bachelor's level, face many more exams and in the end the cost of their education is coming out more expensive,” said Erëblin Hoxha, head of the Student Parliament at the University of Prishtina, who also remarked that students already struggle economically.
“The Ministry has said that education should be for free, but if they apply such fees, education is only free in appearance," Hoxha said.

On December 6, the Student Parliament at UP met with Minister of Education Arbërie Nagavci who promised to remove exam fees for a student's first three attempts on an exam. They would only have to pay after the third attempt. The modification is yet to be implemented.

Correction (December 20, 2021): In the original version of this article it was incorrectly stated that Gramos Buçinca is the director of ORCA. He is the deputy director.