Vetëvendosje (VV) is on course to complete a landslide victory in Sunday’s extraordinary general election.

With over 99% of regular votes counted, Albin Kurti’s party has secured almost 48% of the votes — more than any party in Kosovo’s post-war history.

In an election VV billed as a referendum on Kosovo’s future, citizens responded in huge numbers to hand the party a comprehensive victory. By the early hours of the morning, it had already achieved the record vote tally for any party in an election, surpassing the 359,851 votes received by Ibrahim Rugova’s LDK in 2001.

The other major parties quickly conceded defeat after seeing their own share of the vote fall away.

The Democratic League of Kosovo (LDK) particularly saw its vote share collapse; at just 13% this represents the worst result in the party’s history, while the preliminary results indicate that there is not a single municipality where LDK has won the largest vote share.

LDK was vocally criticized by many last year after bringing down its own newly formed coalition government with VV in the height of the pandemic.

On Monday, party leader Isa Mustafa — who has led the party since 2010 and been a member since the ’90s — announced his resignation.

The Democratic Party of Kosovo (PDK) is set to finish second but its current vote share of around 17% would also represent its worst ever result.

With Nisma on course to miss the minimum 5% threshold for representation, the only other Albanian party likely to be represented in the Assembly is the Alliance for the Future of Kosovo (AAK), although its vote share of around 7% is also down on previous elections.

Belgrade-backed Srpska Lista has once again dominated the vote amongst Serb entities, while a new citizens’ initiative, Romani Iniciyativa, has secured more support than the other Roma entities combined.

VV is expected to see its lead increase further in the coming days after the counting of postal ballots sent by members of the diaspora. 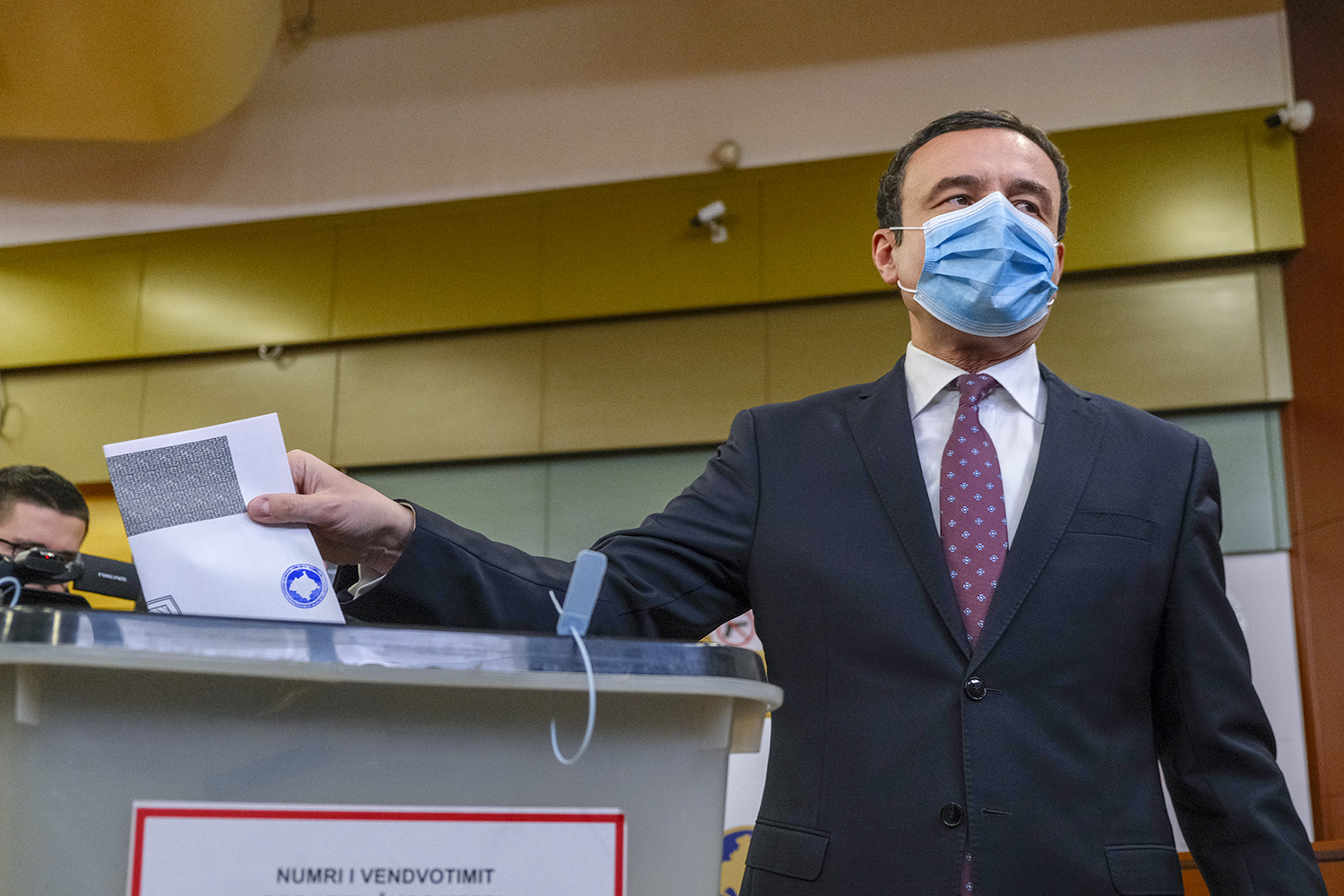 Postal ballots are counted separately from the in-person votes and diaspora representatives have warned that this process may take around 10 days due to record diaspora voter registration this year; according to Germin, the Central Election Commission (CEC) received 43,447 envelopes by post by the February 12 deadline, while each envelope may contain multiple ballots.

VV leader Albin Kurti has previously stated that he wants to win an overall majority of deputies in the Assembly and that he does not want to govern in coalition; acting President Vjosa Osmani — who teamed up with VV in a joint list after leading LDK’s ticket in 2019 — will also be watching the seat allocation carefully as she bids to receive the mandate from deputies for a full presidential term.

The final allocation of Assembly seats will be made after all votes have been counted and verified by the CEC, following any appeals and legal challenges. In previous years, this process has taken a number of weeks. 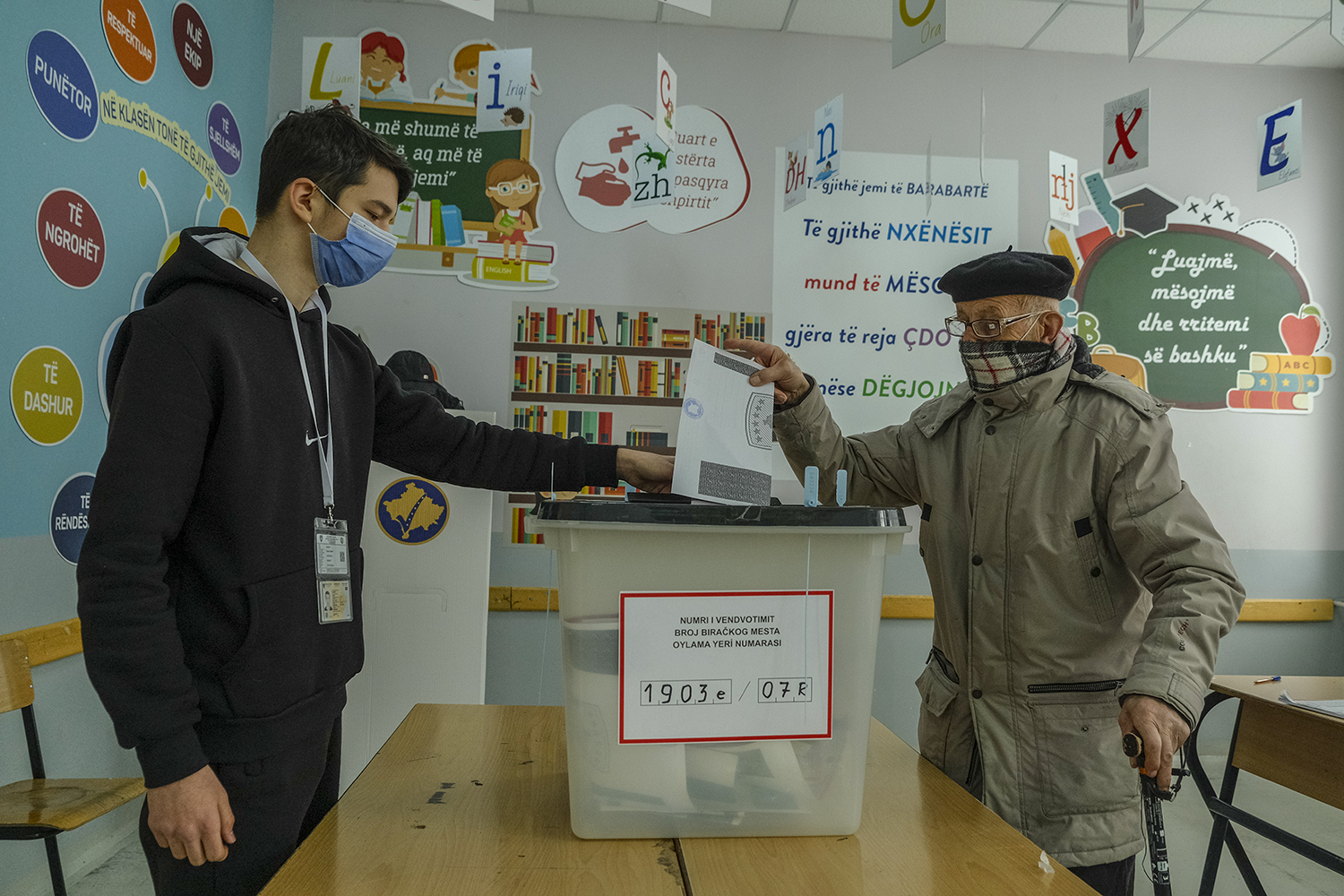 Many older citizens and those with disabilities had to battle inadequate infrastructure in addition to icy temperatures on their way to vote. Photo: Atdhe Mulla / K2.0.

At 47%, turnout in this election was also higher than in any election since 2004 as citizens braved snow, sub-zero temperatures and COVID-19 restrictions to cast their votes.

Turnout increased significantly in Kosovo’s four majority-Serb northern municipalities — and in three municipalities is more than 80%. There have been some media reports of electoral irregularities in these areas, but these have not been independently verified by election monitors.

‘By no means a mandate for revenge’

Shortly after various media published the first projected results after the closing of polling stations at 7 p.m., fireworks erupted in Prishtina and VV supporters began to gather to celebrate in a number of city centers around the country.

As the results started to pour in and the direction of travel became clear, the capital’s streets reverberated with the sound of car horns and VV chants as people drove laps of the city vocalizing their support.

Just before midnight, Kurti and Osmani held an outdoor press conference, where both read victory speeches in front of dozens of activists and journalists and invited people to celebrate in their homes.

“We are aware of the great burden we carry as a result of the great trust you have given us, but your trust will also guide us on this journey,” Osmani said. “The responsibility you have placed in us is also a great honor because together we are continuing the work of developing the democracy that we worked so hard to build.”

After often finding herself the target of personal abuse from political opponents — particularly those within her own former party — Osmani presented a conciliatory tone.

“This is by no means a mandate for revenge, nor is it a mandate to [look] backward,” she said. “This is the chapter of work that will be done; it is a mandate when we honor our common history, when we guarantee prosperity, fight corruption persistently and uncompromisingly, ensure justice and work diligently for equality.”

“Each of us must take the responsibility to make our country liveable for all, as it is loved by all.”

Kurti, himself no stranger to personal attacks over the years, echoed the sentiment that there would be “no spite or political revanchism,” and thanked his political opponents for a fair competition: “I wish them successful reforms because our democracy needs genuine opposition that keeps power in check.”

He further expressed his thanks to core groups of voters who have helped to secure such a landmark victory and added that it was the responsibility of every individual to work toward making Kosovo a better place for all.

Acting prime minister and LDK’s prime ministerial candidate Avdullah Hoti conceded defeat on Sunday night, saying he takes “full responsibility” for the election result and that he will discuss next steps with his party. He also emphasized that LDK will protect “the interests of the country as a constructive opposition.”

After politicians within the party began to issue statements calling for accountability and reflection from LDK’s “old guard,” on Monday afternoon Mustafa announced to the media that he will resign, revealing that he had called for the party assembly to convene as soon as possible for internal party elections. Mustafa will continue to formally hold the role until a successor is appointed, but said that in practice he would withdraw immediately.

Speaking after Mustafa, LDK leadership member Lutfi Haziri said that the entire 23-member party leadership is “an outgoing” one.

PDK’s acting leader and prime ministerial candidate Enver Hoxhaj congratulated VV on their victory on Sunday and said the will of voters has to be respected. Hoxhaj ruled out the possibility of forming a coalition with VV, citing disparate values and political orientations.

“Kosovo needs stability and we pledge to be a factor of stability from the position of the leading opposition party,” he said.

Yesterday’s elections in Kosovo demonstrated maturity of its institutions, all relevant actors and political parties. The citizens have made their voices heard and I’m looking forward to working with the incoming government on the continuation of the Dialogue. https://t.co/TM6mtxwCLA

Those from EU figures have been focused on Kosovo-Serbia relations, an issue that politicians — including the winning list — barely mentioned in the build up to Sunday’s poll.

High Representative of the EU for Foreign Affairs and Security Policy Josep Borrell Tweeted that the EU looks forward to the next steps of forming a new Assembly and government, and electing the new president after the election. Mentioning the continuous support toward “the European path,” he said reforms are required and that he expects “new authorities to engage constructively in EU facilitated dialogue.”

The dialogue was also highlighted by Miroslav Lajčák, the EU Special Representative for the Belgrade-Prishtina Dialogue, who Tweeted that he’s “looking forward to working with the incoming government on the continuation of the Dialogue.”K