A view on Kosovo politics in 2016 - Kosovo 2.0
Perspectives | Independence

A year of obstacles and protests.

By the end of 2015, Kosovo’s political scene was a mess. Frequent outbreaks of tear gas in the Assembly had rendered the institution all but useless, as political and public dissent towards the coalition government grew more and more hostile. 2016 offered no miraculous solutions.

It has been a year of endless protests, with occasional outbreaks of violence, and while the parliament had become more functional by the end of the year, any political progress has been slow. It was also the year Atifete Jahjaga left office as president, replaced by Hashim Thaci.

Two of the biggest obstacles have been the two international agreements Kosovo signed with its neighbors in August 2015, which have remained a major talking point in Kosovo’s political and public debate throughout 2016. Fallout from the agreements have influenced the visa liberalisation process, and polarized the opposition and the coalition government. Currently the government is struggling to find a way to pass either agreement into law. Although the future of the two contested agreements is uncertain, what is clear is that these two controversial topics will cast a shadow over Kosovo’s politics until a conclusion is reached.

In regard to the agreement made with the Montenegrin government on border demarcation, the opposition argue that ratification would lead to Kosovo losing 8,000 hectares of land. The government meanwhile, holds the contrary position, insisting that the agreement is in accordance with the 1974 Yugoslav constitution, and the country is not giving up any part of its territory. 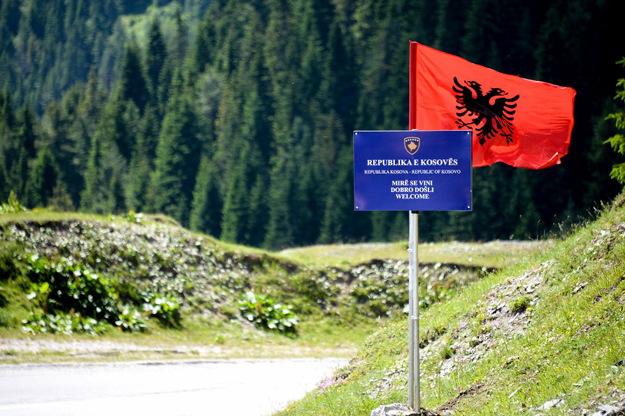 In August, both sides put forward their positions in a marathon 10-hour debate. Besides politicians, experts of demarcation, members of civil society and even the people of the disputed territory in the Rugova valley had the right to express their opinion inside the Kosovo Assembly.

Throughout the year, the coalition government has been concerned over whether it would be able to secure the number of votes required to pass the agreement through the Assembly. As well as the opposition, MPs from the the ruling parties have also pledged to vote against the demarcation deal.

Even some of Prime Minister Isa Mustafa’s MP colleagues in the Democratic League of Kosovo (LDK) have stubbornly rejected the agreement. Most vocal amongst them is Shpejtim Bulliqi, a professor in the Department of Geography at the University of Prishtina, who insists that mistakes were made when delineating the border.

The government scheduled an Assembly session for September 1, which was set to include a vote on the agreement. However, when the agenda rolled around to the issue of demarcation, Mustafa postponed the vote indefinitely, citing security fears. During the Assembly session, protesters filled Skanderbeg Square and the areas around the parliament. It had become a familiar sight.

Citizens on the streets

In January, the new year in Kosovo started not only with fireworks, but also a mass protest in the squares of Prishtina, with thousands of united opposition supporters taking to the streets. The protest culminated in a confrontation with the police, and the occasional throwing of Molotov cocktails, ushering in another heated year in Kosovo politics.

The three opposition parties; Vetevendosje, the Alliance for the Future of Kosovo (AAK), and the Initiative for Kosovo (NISMA) were united throughout the early months of the year, organizing popular protests, including one on Kosovo’s independence day, during which protesters demanded the government’s resignation.

The opposition and their supporters continued to call for the resignation of the government in the days following February 17, but there was a transformation in the protest’s form. A camp was set up in Skanderbeg Square, which remained in place for four days, until the tents were removed by force by Kosovo Police on the day of an Assembly session to elect Kosovo’s new president. Standing in the election was the broker of Kosovo’s controversial agreements, former prime minister and then-minister of foreign affairs, Hashim Thaci.

Although the government of Thaci’s Democratic Party of Kosovo (PDK) and coalition partners LDK have over two thirds of MPs in the Kosovo Assembly, in the initial round of voting Thaci failed to reach the two thirds majority required to be selected as president. After this first round failure, Thaci gave his coalition partner Mustafa a now infamous raise of the eyebrows, seemingly an instruction to keep his troops in order. 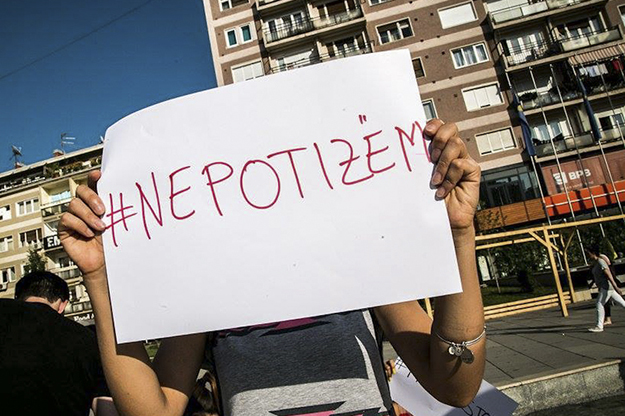 Thaci’s vote increased in the second round but still failed to reach the two thirds required. By the third round of voting, a simple majority of 61 votes was enough; Thaci secured 71 votes to become Kosovo’s new president. As had become conventional, opposition MPs threw tear gas during the session and were later suspended, while protesters outside of the Assembly building clashed with police.

Thaci’s inauguration came in April in Skanderbeg Square in another tense day in the capital. Prishtina has rarely felt such a strong police presence, and the square was almost impenetrable to ordinary citizens. Some opposition activists did manage to crash the party, throwing tear gas near to the seats where various international dignitaries, including Croatian President Kolinda Grabar Kitarovic, were located.

In May, Vetevendosje decided not to participate in a protest called by AAK and NISMA, after some disagreements between the opposition parties. Since then, the opposition has not coordinated its actions, though all have remained determined in their opposition to both international agreements.

By the summer, a fresh wave of protests had begun, this time organized by members of civil society. They were sparked by revelations published on Insajderi, an online news portal that leaked a number of wiretapped phone conversations involving key figures from PDK. The conversations, dated from 2011, hinted at the misuse of power for personal favors, and excessive influence over the employment process in key positions at publicly owned enterprises.

One of the protagonists of the wiretapping scandal, Adem Grabovci, resigned from his position as chief of PDK’s parliamentary group, but no visible steps have been taken by the judicial system to investigate the content of the leaked conversations.

On the same week that the wire tappings were leaked, the Assembly building was hit with by two rocket-propelled grenades. Weeks later, six Vetevendosje activists were arrested as suspects. 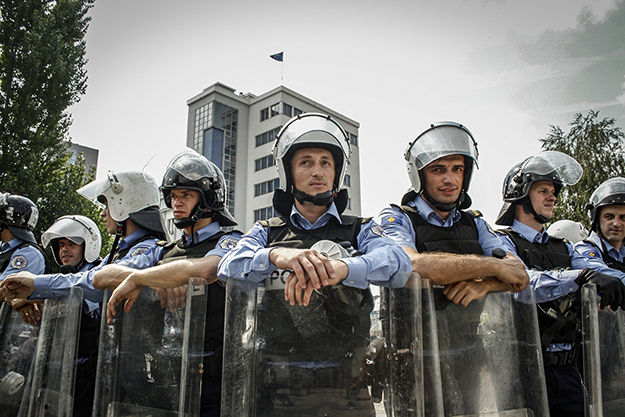 In November, one of the detained, Astrit Dehati, died whilst in custody in Prizren in unclear circumstances. A new wave of protests organized by civil society saw thousands marching in the streets of Prishtina demanding justice for Dehari. The events surrounding the activist’s death still remain contested and shrouded in mystery.

Some positive news for the country came in May, after the European Commission proposed visa free travel for Kosovars, who remain the only citizens in the Western Balkans unable to move freely within the Schengen Zone. For months, it was widely believed that Kosovars would soon be able to travel to the Schengen Zone without a visa, and the endless bureaucratic process of obtaining one.

However, two conditions that the European Commission attached to visa liberalization — the ratifying of the border demarcation agreement and an improvement in the track record of the fight against corruption — proved more testing than was expected, especially the demarcation issue, which remains unresolved.

With 2017 just around the corner, visa free travel for Kosovars still seems far off. This month, the EU confirmed that Ukrainians and Georgians will be able to move freely within the Schengen Zone from the beginning of next year, increasing discontent amongst Kosovars, who are feeling more and more isolated.

Kosovo did take one small step closer to European integration this year: In April, the ‘Stabilisation and Association Agreement,’ signed in October 2015, entered into force. The agreement was said to be the first contractual relation between Kosovo and the EU, and would facilitate the integration of Kosovo’s economy into the European market.

Yet the biggest challenge for Kosovo’s European future remains the five EU members (Greece, Romania, Spain, Cyprus, and Slovakia) who continue to be hesitant to recognize Kosovo. Though none of those five countries altered positions, two new nations did recognize Kosovo in 2016; Suriname in July, and in December the 113th international recognition of Kosovo came from Singapore.

Improved neighborly relations with Serbia will help ease future recognitions but 2016 has seen more discussion about the poor implementation of the agreements reached together by Kosovo and Serbia. The second of the agreements from August 2015, the deal brokered by the EU between Kosovo and Serbia that paves the way for forming an ‘Association of Serb Majority Municipalities’ in Kosovo continued to be an obstacle in negotiations during 2016.

Failure to implement last year’s agreement resulted in Kosovar Serb party Serb List boycotting its place in both the Assembly and in the government. Currently, Serb List’s return to the institutions will only occur once the agreement has been enforced by the Kosovar authorities.

Tensions with Serb List and the other elements of the Kosovo government rose again in October after a draft law was adopted regarding ownership of the Trepca mine complex. Authorities in Prishtina proposed taking control of the mine, transferring 80 percent of the shares to the state while 20 percent would be owned by the workers.

Kosovar Serbs working in the mine in the north of Mitrovica have rejected the move by the Kosovo Assembly and asked for the support of Serbia, whose Prime Minister Aleksandar Vucic described the adoption of the law as “null and void.” Meanwhile, Serb List asked that the adoption of the law be annulled by the Constitutional Court of Kosovo, on the basis that it was unconstitutional. The court disagreed.

The Kosovar and Serbian governments were also thought to have agreed to revitalize the Mitrovica Bridge, which has divided the north and south of Mitrovica since the war ended. In August, heavy machinery started to dismantle what had been bizarrely named ‘the park of peace.’ However, revitalization of the bridge failed to bring unity and instead brought another wall, blocking the bridge at the northern end. 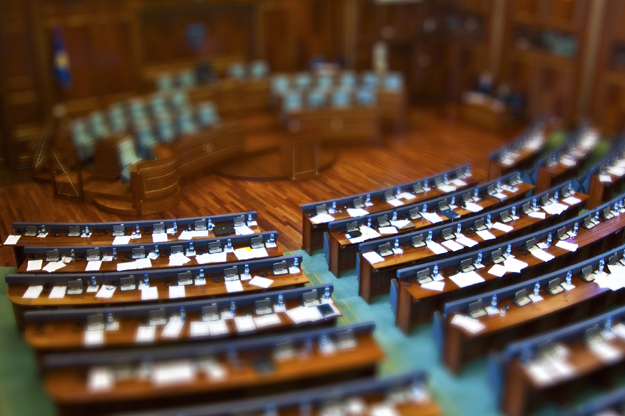 The wall’s construction in December sparked a fiery reaction in Prishtina, with all three opposition parties claiming that the wall is a product of the ongoing dialogue between the Kosovar and Serbian governments. However, government officials were also quick to condemn the construction of the wall, calling for aid from the EU, the mediator of discussions.

A spokesperson for the EU’s Foreign Affairs and Security Policy unit Maja Kocijancic had another vision of the construction. “It will not be a wall, but stairs that will link the road with the pedestrian area.” The future of the wall still remains unknown, with Kosovo authorities pledging to destroy it.

The future of the wall is not the only uncertainty for 2017. All eyes were on Drenas in December where local elections took place with Kosovo’s key political figures frequenting the small Drenica town every day. Since the war, PDK has dominated elections in Drenas, and it was their candidate, Ramiz Lladrovci, that eventually defeated NISMA candidate Isa Xhemajlaj in a runoff election on December 18.

However, the need for a runoff in itself was remarkable, the first ever required in Drenas, and it may be a sign that support for PDK is weakening. Many viewed the election as a good test for where political parties stood, ahead of what might be a year of parliamentary elections. If these predictions of 2017 being an election year are correct, it could be a time of change in Kosovo politics. However, one predictable element in next year’s politics is that the key issues that dominated 2016 are unlikely to go away.K