When the Academy of Arts and Science building was inaugurated in 2010, on a golden plaque in front of the entrance was engraved a quote attributed to then prime minister, now president, Hashim Thaci: “The temples of knowledge and science are rays of light for the nation and for humanity.”

Not long after, following a public outcry, it was removed, with critics pointing to — amongst other things — the absurdity of displaying such a quote from someone with very few academic credentials. With the education scandals that subsequently followed — from a rector with dubious credentials, to PISA test results that ranked Kosovar pupils amongst the least literate in the world — the plaque in retrospect may ironically have been a perfect symbol of an education system in disarray.

On Wednesday (Sept. 27) K2.0 hosted a Small Talk at Kosovo’s National Library in Prishtina, focussing in on the topic of the competency and professionalism of teachers and professors. Titled “Who’s teaching our students?” and attended by dozens of students and
intellectuals from various fields, it was moderated by Agnesa Qerimi from Kosovar Youth Council, who explained that this discussion was being held at a critical moment for education in Kosovo. 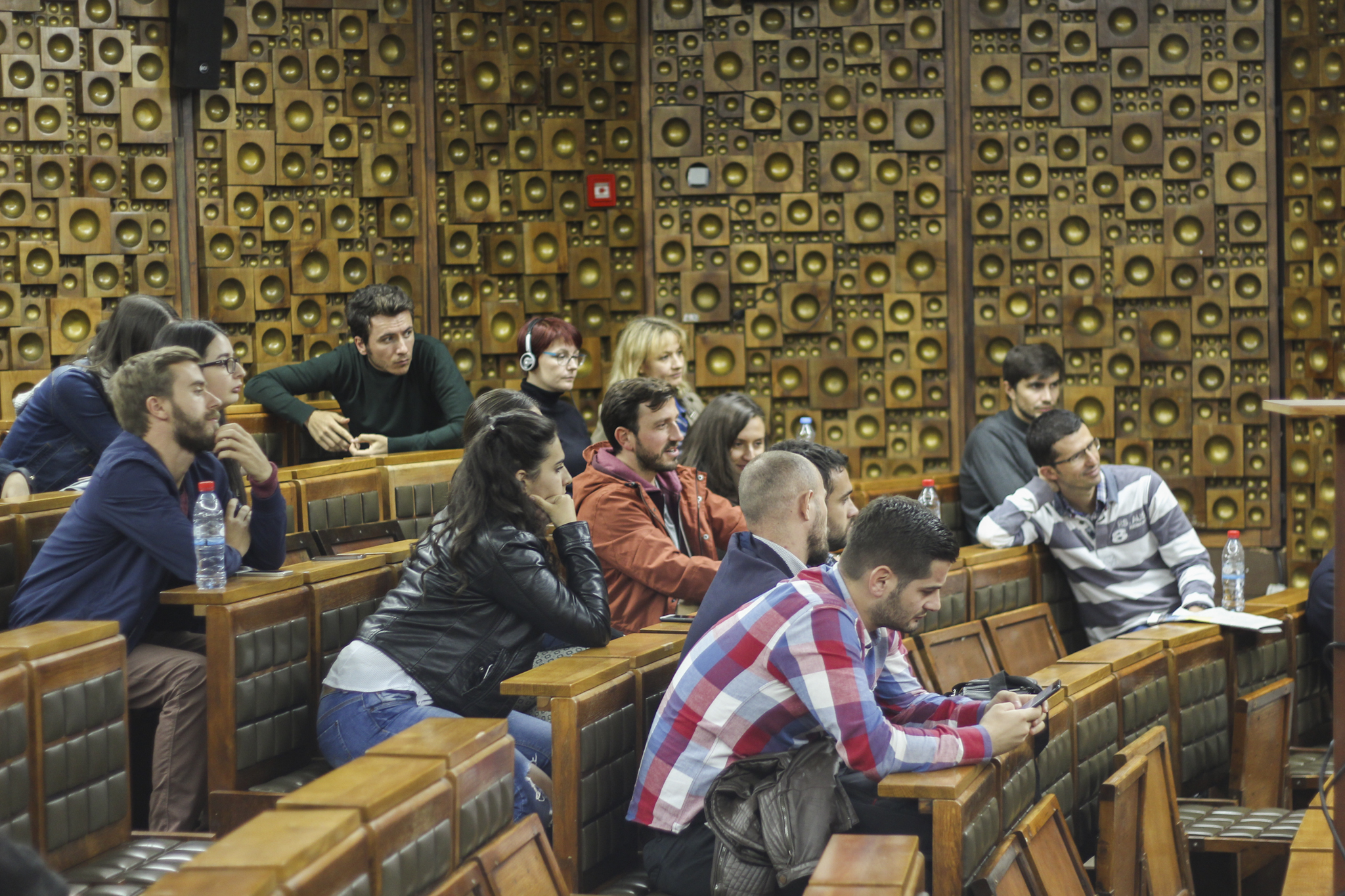 Qerimi’s noted that education is “one of the essential pillars in our country,” and that it has finally started to receive the attention it needs in order to see improvement. But she also expressed her concerns at “what kind of generations this teaching is generating,” and whether students will be able to further develop the skills that they’ve learned, or even compete in the labor market.

To get the discussion started, a number of guest panellists had been invited, with Besa Luzha, a professor herself in the Department of Music within the Faculty of Arts, speaking first. Luzha began by emphasizing that the most important thing to be a teacher, whether in an elementary school, high school, or at a university, is not only the professional training but also that one must have methodic, didactic and pedagogic preparation.

According to Luzha, having these skills requires “commitment, knowledge, and preparation,” but they are expected from every teacher. However she says that in many, if not most, of Kosovo’s faculty branches and study programs, the methodic-pedagogic component is missing.

In all European and regional schools, “teachers are prepared also from the pedagogical, didactic and methodic aspect, and all of them have that diploma to be teachers,” she said. 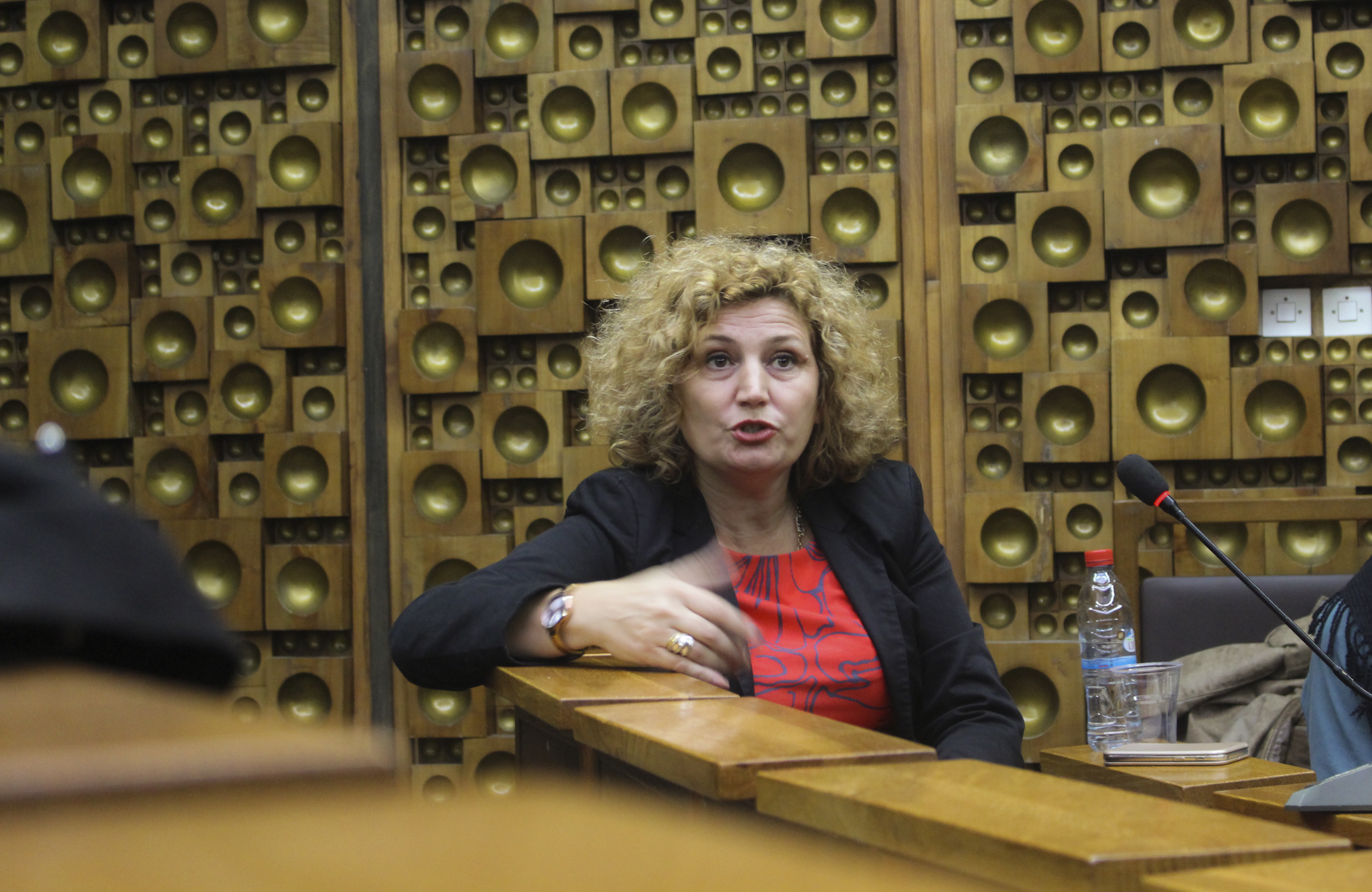 Luzha explained that in 2001 there was an effort made in Kosovo to adopt the Canadian model of teacher qualifications, where every teacher goes through a similar process. “For example, a historian who finishes the Faculty of History, but who wants to be a history teacher, then has to pass into the Faculty of Education in the fourth year, and then do master’s,” Luzha explained. She went on to explain that this model was refused by every faculty.

She also highlighted another problem in that the majority of Kosovo’s teachers do not have the opportunity to update their professional knowledge by attending trainings and other study programs, in order to ensure that a teacher that started teaching in 2000 is still able to suitably teach students in 2017.

In order to illustrate the issue of overcrowding in classrooms, Luzha gave an example that drew laughter from attendees. “When I was in the faculty of education, one semester I was engaged to hold a lesson for [student] educators. I had 1,000 students,” said Luzha, adding that she was supposed to deliver the course with a microphone in a huge amphitheater.

“Of course it was impossible, because the subject I was teaching required that I ask each one to either sing a song, or to organize a musical play. In 90 minutes I could not even have addressed 90 students.” She added that although she divided them into five groups of 200, “there were still too many of them.”

While Luzha focussed more on elementary schools, high schools and universities, the next invited panelist, Kushtrim Bajrami from Kosovo Education Center, went even further down the rabbit hole. “Only 15 percent of children aged 0 to 6 go to kindergarten,” he said adding that “it has been verified worldwide that the higher the percentage of children attending kindergarten, the better the results in school and then university.”

He also added that in the last years, a lot of public funding has been invested in building school infrastructure. He believes that the reason for this has to do with tenders of public money going to private economies, which in turn translates to benefits for political parties and other interest groups.

Bajrami argued that it does not even solve the problem of space, because while many schools in some villages and smaller cities remain empty, in Prishtina there are classes with 40 students in them. 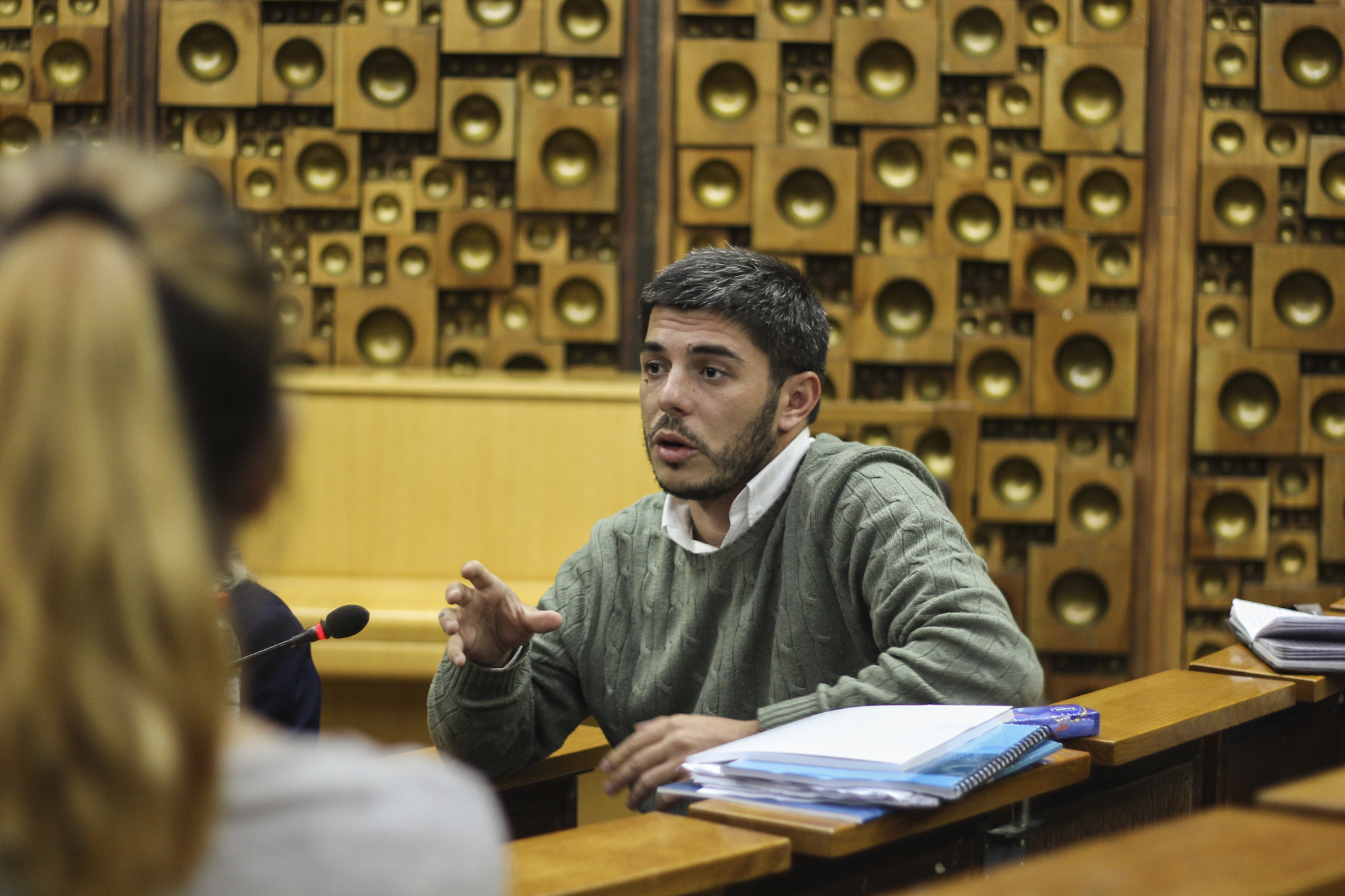 He added that the wages of teachers — which he said can range from 1,000 to 2,000 euros, depending on the position — are not in harmony with their quality of teaching, but argued the reason they get such high payments is because they are a favored political target. “The government has the best voters in them [teachers], and they are targeted all the time,” Bajrami said. “You see them at lunches and dinners [with politicians] during election times.”

His portrait of our teachers is not necessarily the typical one of “heroic” individuals doing “divine work,” but one in which they can be as unreliable as any other person.

Bajrami believes that teachers’ unions are in an even worse condition: “They [union leaders] have been in power for as long as Tito was. They never change, never! Have you ever heard them talking about why teachers aren’t being trained?” he asked rhetorically. “They only talk about wages and salaries, and that is all they know.”

The final invited panelist, Rron Gjinovci, the executive director of education quality NGO Organisation for Increasing the Quality of Education (ORCA), declared that “if there is something bad that Milosevic has done to us, it is exactly in the ’90s with the parallel system he forced us to create.”

According to him, the University of Prishtina enjoyed its golden years from the ’70s, when new staff were brought from Belgrade, until ’91, when Kosovar Albanian teachers were dismissed en masse from their jobs.

“You can even find scientific journals [from the ’70s and ’80s] such as ‘Acta Biolog’ from Prishtina, which is archived in the library of Cambridge,” said Gjinovci, stressing the fact that scientific works from Kosovo were previously considered valuable and respected by international academics. 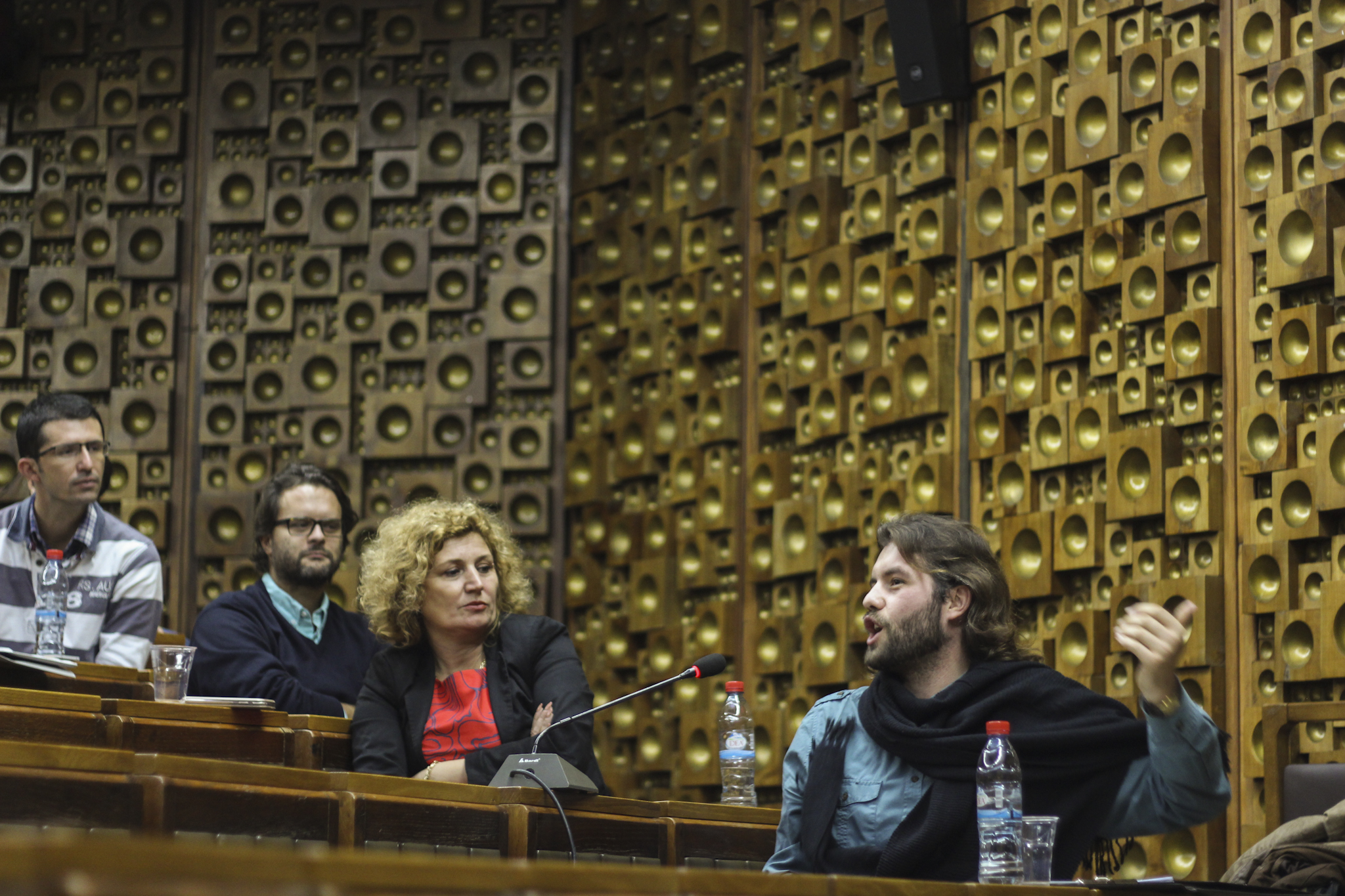 Rron Gjinovci of ORCA said that Slobodan Milosevic did no greater damage to Kosovo than by disrupting its education system, which had been flourishing in the ’70s and ’80s. Photo: Cristina Mari / K2.0.

Gjinovci said that although there is a general feeling that through the parallel system Kosovar Albanians consolidated their resistance to Milosevic, “it only has symbolic power, which I believe that the then president, Rugova, adored when we take into account his political views.” Although this may have caused Milosevic a headache, Gjinovci believes that time will show that “this was most likely the downfall of the University of Prishtina, and education in Kosovo.”

He went even further, saying: “If you see the number of victims, the damage that was done and [consider] how much Kosovo has gained politically from it [the repression by Milosevic’s regime], we are in a big discrepancy. But if we look at the damage that was done during the ’90s with the parallel system, which we were forced to create, it is too great,” he said, explaining that the majority of professors now teaching at the University of Prishtina and other education establishments were educated through the sub-standard conditions of the parallel system, with “the golden generations” before them having passed away.

The other necessary thing to consider with regard to Kosovo’s education system, he said, is academic integrity. “With that we understand the competency of professors to teach their proper lesson or lecture, or to perform their work based on existing regulations,” he said.

“More than half of those professors [and] associates … do not justify their academic titles in the University of Prishtina.”

He compared this with Prague’s Charles University, where in order to become a regular professor the minimal number of scientific works published in is 15. He said that even in the region, let alone in the European Union, the number of published scientific works required is much higher than at the University of Prishtina.

Despite the minimal publishing requirements demanded, ORCA published a report on February 15, to coincide with the anniversary of the University of Prishtina’s founding, which showed disheartening results regarding the credentials of those leading the public university.

“The Academic Integrity of the Managing Staff of the University of Prishtina,” looked into where executive and managerial staff — such as the dean, pro-dean, decans, pro-decans and senators — had had their academic works published. The results were that if works published in dubious journals were discounted, 49 percent of those individuals looked into, including five deans, cannot justify their titles, because they have fewer published papers than regulations require. 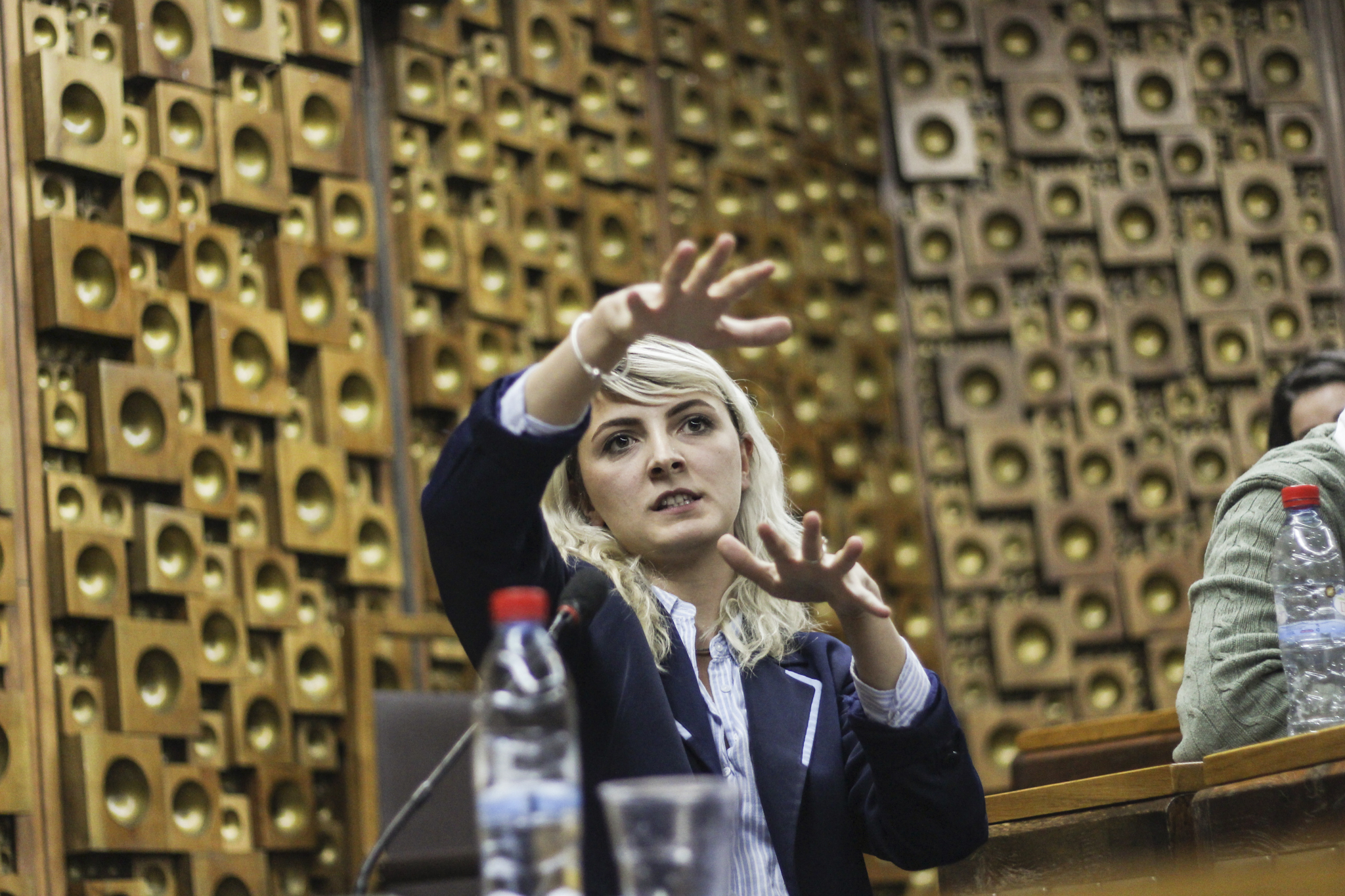 What is even worse, Gjinovci said, is that even if those works published in dubious journals were taken into account, 42 percent of senior staff would still not fulfill the academic criteria to justify their roles.

Struck by these findings, ORCA concluded that there is a systematic breach of the University of Prishtina’s Statute and governing laws and decided that they should investigate the CVs of all professors, assistants and associates. Gjinovci said that while he was unable to reveal the exact figures yet as data was still being compiled, their provisional findings point to a “desperate” situation. “More than half of those professors [and] associates … do not justify their academic titles in the University of Prishtina,” he said.

In a lively debate that followed amongst attendees, a discussion opened up as to whether it was the role of students to challenge their professors about their academic credentials. Opinion was divided as to how to best confront the issue, with one participant suggesting every student should be prepared to challenge their professors if they had doubts, and others arguing that this was the role of management and students should be able to focus on their studies.

Gjinovci suggested that organizations such as ORCA were providing the research that would be publically available, so that students didn’t have to dig out this information themselves. But he also suggested that students can still play a role. In the future, when ORCA look to organize protests about their findings, he said that students should come out to support in large numbers.K